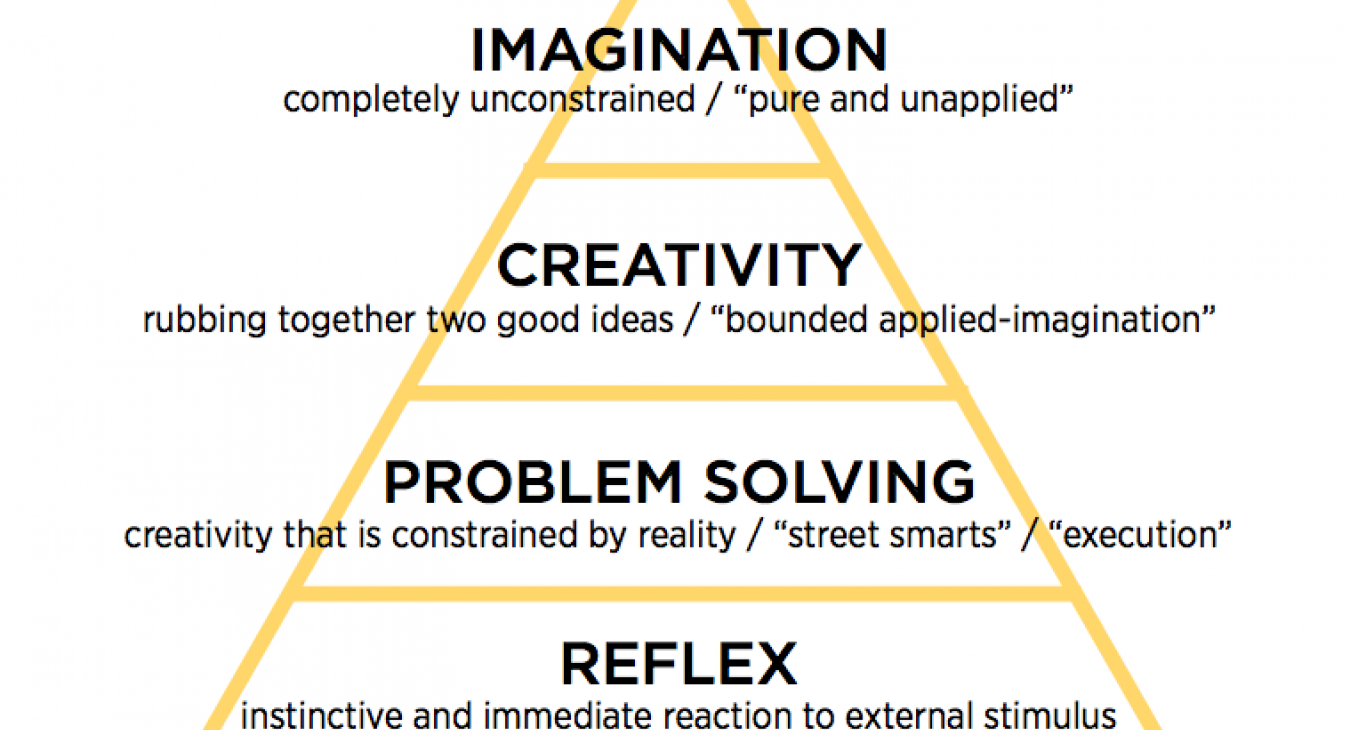 There were two things, no, make that three, that struck me enough about Patricia Flatley Brennan Maslow-like "Hierarchy of the Imagination" to make me want to share it with you:

Because this is what led me to explore (so late in my fun-focused career) this faculty of ours that we call "imagination" - the realization that it is something we do for fun. Unconstrained and unapplied. And it's on the veritable top of the hierarchy!

In the article "Imagining a healthier future," we learn that she had help in developing her model from her colleague and mentor John Maeda who understood imagination as “a gift that can be opened when one has some degree of safety and agency” - the same conditions we need to open the gift of play.

Brennan, the article continues, was

"a skeptic of insight-oriented cognitive approaches expressed her ideas about imagination to Maeda who was able to formulate them as a drawing. By the end of their session [the Hierarchy of Imagination] was born. The discussion leading to this concept focused on getting patients to imagine themselves as healthier individuals. Brennan’s hypothesis was that creativity could not necessarily be taught but that it is malleable and could be cultivated – encouraging patients to expand their imaginations could help them envision better outcomes."

I repeat: encouraging patients to expand their imaginations could help them envision better outcomes. Here, then, in brief, is imagination applied.

"This is the result of a conversation I had with Patti Brennan about the nature of creativity and imagination that was inspired by Maslow’s famous Hierarchy of Needs. I was impressed how Patti had a clear mental model of why “teaching creativity doesn’t work but expanding their imaginations might work better” in the context of some of her work in patient healthcare. Her basic thought was that in order to get patients to take control of their health, they need to imagine what it looks like to be more healthy.

At the base of the pyramid is human reflex -- i.e. response to a stimulus. One level above it is problem-solving which in her mind doesn’t require creativity and just a set of processes that can be activated. Above that is creativity -- an elevated form of problem-solving that involves invention and improvisation. And at the very top is imagination, which Patti insisted is “boundless creativity.” You can mix the different levels at the interfaces and see a different kind of creativity/action happening. I sincerely enjoyed how this model felt in my mind."