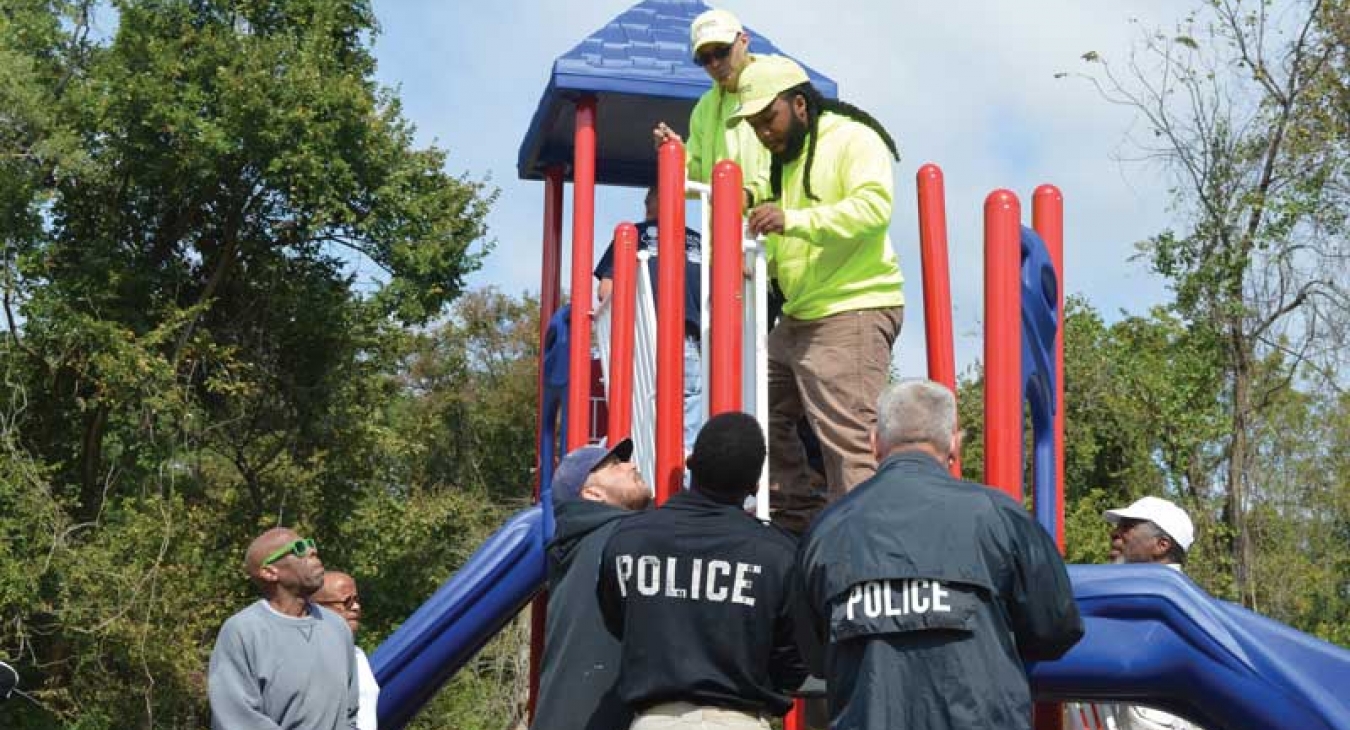 for a Stronger Tomorrow

One company trying to make a difference in the communities where they do business. Scott Cunningham, President of Cunningham Recreation, decided he and his third-generation company wanted to make a difference in communities across the country by starting an initiative called “Healing Communities Through Play™.” The goal of this campaign initiative is to bring together law enforcement officers and other first responders with local community residents and youth to build a playground side by side fostering a more cohesive relationship and rebuilding trust. Together the community will build a gathering place, where children and their families can play, learn and socialize.

“We are hoping this small initiative finds its way throughout the United States and starts to help in mending community relations with local law enforcement. This is by no means a fix for the problem that exists today in our country with police officers and first responders, says Scott Cunningham. “But one small step in the right direction.”

During the “Healing Communities” playground build, all community sectors work together toward a common goal—complete the build of a play structure and present the neighborhood with a new play space for area residents. Play is a universal language that brings children as well as adults together. Play allows people of all ages to connect on a basic level.

Play 4 ALL, a division of Cunningham Recreation, manages this national campaign with the hope of rebuilding community trust and relations between local residents and law enforcement. The program provides opportunities for police, youth, community residents and leaders to interact, communicate, get to know one another and focus on their commonalities rather than their differences.

Cunningham Recreation’s pilot “Healing Communities Through Play™” playground project started with the City of Ferguson, Missouri. City leadership including the Mayor and Police Chief, St. Louis area Fraternal Order of Police, Ferguson Parks and Recreation Department, community youth and area residents all came together in a cooperative effort to build a playground and bring the power of play to the Ferguson Community Center on September 29, 2016. Cunningham Recreation and GameTime play equipment, the largest playground manufacturer, supplied the play equipment, borders, and safety surfacing material. This new playground is more than a place to play and have fun. According to one area resident, the playground is a “Beacon of Hope.”

March 29, 2017, county residents, youth and local leaders joined Mecklenburg County Park and Recreation, Charlotte-Mecklenburg Police Department Metro Division, and Cunningham Recreation for the second Healing Communities Through Play™ playground build at Druid Hills Park, 2801 Poinsett St. in Charlotte, North Carolina. More than 100 volunteers worked together; police, youth, and residents side by side, to build the playground. “It’s a small idea, but one that can hopefully change negative perceptions and have a positive impact on our local communities,” says Officer Chelsea Kidder with the CMPD. Officer Kidder has now moved to another state police department and hopes to do another “Healing Communities Through Play™” project there.

On June 9, 2017, the Rockford Parks Department, Rockford Police Department, County Sheriff’s office and Sharefest volunteers built a brand new playground was in Levings Park. Law enforcement came out in droves and stayed throughout the day to ensure that the job was complete. Local children could not wait for the remaining safety surfacing to be laid before climbing, sliding and swinging on the play elements. Cunningham Recreation’s local installer, Custom Playgrounds, generously donated their labor and equipment to prep the land and to supervise the volunteer playground build. The teaming up of these sectors was paramount in the success of this “Healing Communities” project.

Danforth Elementary “Healing Communities Through Play™” project happened on July 21, one of the hottest days of summer. With temps reaching over 104 degrees, over 140 volunteers flooded in to make sure a new playground welcomed the students back to school the following month. Helping do the heavy lifting, River View Gardens Varsity and Jr. Varsity football team joined the officers and community volunteers. “It’s a day that I will never forget,” said an officer that was recently wounded while on duty. “There is so much good in the world.”

The most recent “Healing Communities Through Play™” project took place August 22, where a team of Baltimore based community groups including Parks and People Foundation, Bon Secours, Celebration Church, and many others along with Cunningham Recreation banded together to transform an open space located in the Franklin Square Community from a vacant lot into a beautiful play space. It was refreshing to see so many community groups, businesses and residents come together for a common goal. Kirby Lane Park is now a community gathering place, a place for healing, a place for play.

The work accomplished through the “Healing Communities Through Play™” initiative addresses the need to rebuild trust and bring the community together. Engaging sectors that have strained relationships and asking them to work together on a playground project does more than providing long-time play space. The act of coming together and connecting for the good of a community and a common goal, will hopefully encourage greater communication and develop a deeper sense of understanding during future interactions.

Cunningham Recreation and Play 4 ALL partner with local municipal departments, corporations, foundations, and other like-minded organizations to complete these “Healing Communities Through Play™” projects. Many companies, large or small like Cunningham Recreation, feel the need to make an impact in the communities they too do business in, hoping they are contributing for a better stronger tomorrow.

To learn more about Play 4 ALL and the “Healing Communities Through Play™” initiative or hear how your company can become a “Healing Communities” partner call Victoria Babb, Community Resource Manager at 800-438-2780 ext. 139 or email
[email protected].