Finding a Way in Bay Minette 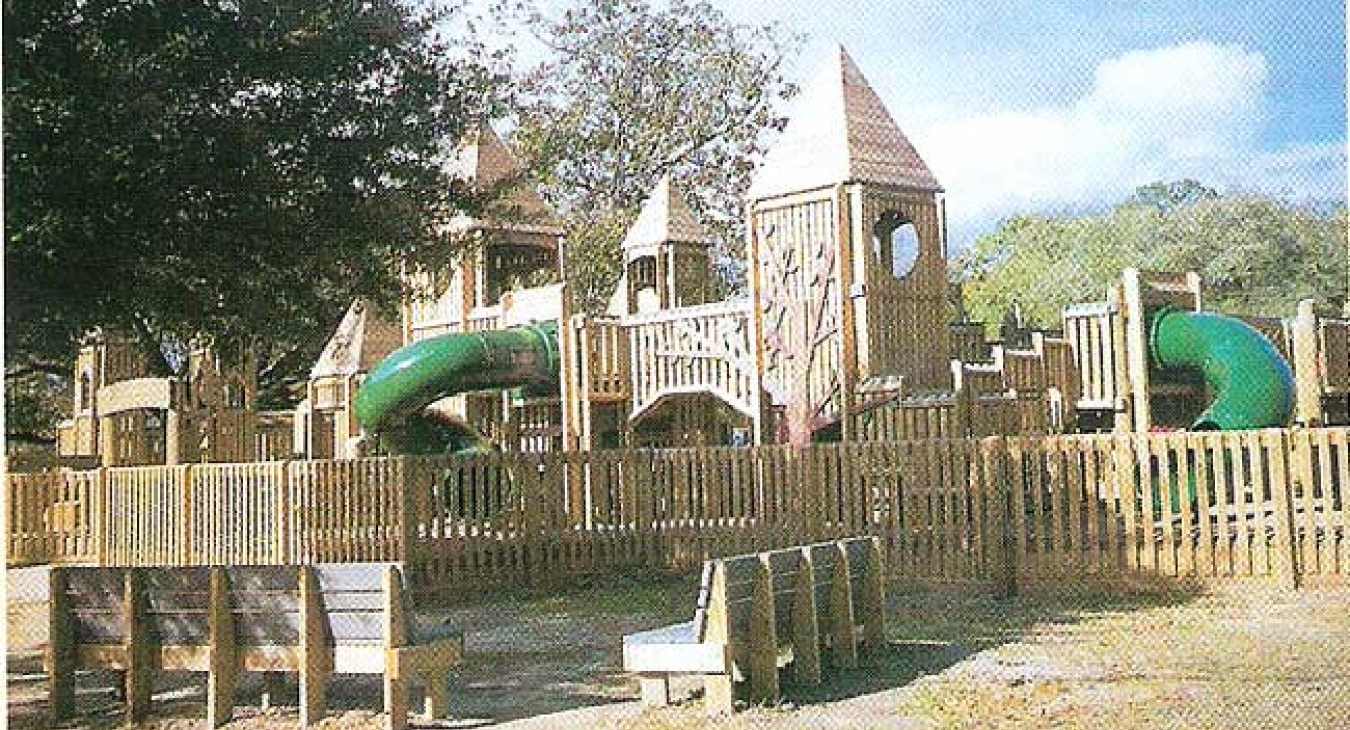 "Let's Build it Together"

That was the theme our community selected for the Bay Minette Park Project. Building a kid's park is no easy task, especially for a small community. Parents want equipment that is safe for their children to play on, yet appealing to the eye, as well. However, design, materials, and labor for a top-quality playground can be very costly.

When our community in Alabama initially learned of community-built parks, we had already looked into several other options. Yes, the elementary schools had playgrounds, but the equipment was not sturdy enough for older children, and many of the school playgrounds were outdated.

Although there were several park areas. only two had play equipment. One play area was pulled up by the city to build tennis courts, and the other had old, unsafe, metal equipment. Parents wanted a safe place to take our children to play.

Although the desire was there, the money wasn't. There were no public or private funds available. Determinedly, several of the parents decided to face the problem head on. Having heard about other communities with similar quandaries, we copied their solution: a community-sponsored volunteer-built park.

We knew this task was an enormous undertaking, but the incentive was high inasmuch as there was no other way to get the park built. Lani Redmon, a working mother of two young children, agreed to head up the project. She contacted other community parks in nearby areas to interview architects who would be willing to assist in the project. Because of the safety, legal, and financial concerns, it was imperative to have knowledgeable help. Many architects and contractors are unwilling to take on these projects because of the previously mentioned concerns. Fortunately for the project, Redmon located Leathers & Associates out of Ithaca, New York. She comments, "They were very knowledgeable about community-building projects; we wouldn't have been able to tackle this playground by ourselves." Our architects were very organized; they had done parks similar to ours before, and they had a lot of useful advice.

Once we had found a firm to take on the project, the real work began. Building a playground requires much more than just nailing a few boards together. Our park cost over $110,000 in supplies and materials, and a percentage of the money had to be raised before the plans could be drawn.

While interest and verbal support had been high at the outset, it was important to get the entire community involved in such an enormous undertaking. Community Kids' Park Project began in August of 1999. The architects flew in from New York for Design Day in the fall to help stir up interest and support. Business owners donated prizes for raffles, local food suppliers provided the meal, and local students were interviewed by the architects, who asked opinions on what types of designs and equipment they would like in the new playground. There was a huge turnout of families, and the committee heads were encouraged. Everyone appeared to be excited and enthusiastic about the plans.

It was, however, a challenge to raise money in the early stages. Most of us involved in the project were parents of young children, and many of us worked, as well. Time was a factor -- or rather, a lack of it. Additionally, many businesses and professional groups did not seem to take us seriously in the beginning. Because it was a grass-roots volunteer organization, some outsiders doubted whether there was enough commitment to succeed. Furthermore, there were problems with the city government. At first, they were reluctant to help with the financial aspects, and they also were slow to approve locations and labor assistance.

We were blessed with strong support from local civic clubs and organizations. Rotary, Kiwanis, Women's Clubs, North Baldwin Hospital, and local schools had fundraisers, donating all proceeds to the Kids' Park. Not only did this assist us financially, but also it continued to spread the word and focus public attention on our project. Without the aid of these groups, it is doubtful that we would have had such a successful experience.

After raising funds for several months, we began organizing final details in the summer of 2000. We scheduled "Build Week" for August 23-27. Using volunteer labor, it would take only five days to build the entire park! It seemed almost impossible to believe that it was actually happening. As the building dates loomed near, we worked frantically to raise the remaining $50,000 we needed. As Food Committee Chairman, I was responsible for locating food to be provided for the meals during Build Week. Once, again, local caterers, restaurants, and grocery stores came to our aid. Additionally, despite earlier foot-dragging, the city agreed to donate the remaining funds needed. They were impressed by the $60,000 we had already raised. Two fundraisers that had proven invaluable were T-shirts and tiles. Many parents and community members spent hours at ballgames and grocery stores selling these items.

During Build Week, there were a few small crises to be handled. The volunteer turnout on the first day of construction was lower than we had expected and the architects were concerned that the project might have to be scaled down. Spurred on by fear of downsizing. the committee heads called friends and notified the local television news and radio shows to spread the word. The turnaround was astonishing. People who stopped by out of curiosity ended up staying for hours to help build. The volunteers were not only the parents of the community. but lawyers, doctors. retired citizens, and teachers. Students came by after school and worked with non-powered tools. The architects had everything so well organized the project went up quickly.

The daily metamorphosis was awesome to observe. The community spirit was palpable as we worked alongside friends and new acquaintances. Many were reminded of old fashioned "barn-raisings" from earlier days. Although the temperature was often above 90 degrees, and a few times it even rained. The enthusiasm never damper;ied. The architects were strict about code standards, and a few times things had to be taken down or redone. They were perfectionists about the work, which enhanced the quality of our playground.
At opening ceremonies that Sunday night, there were big smiles and a few tears. The park is a source of pride and is worth much more to our community than the money raised to build it . It brought Bay Minette together. Across age. class and racial lines. As Mrs. Redmon commented, "It was the best job I ever had."