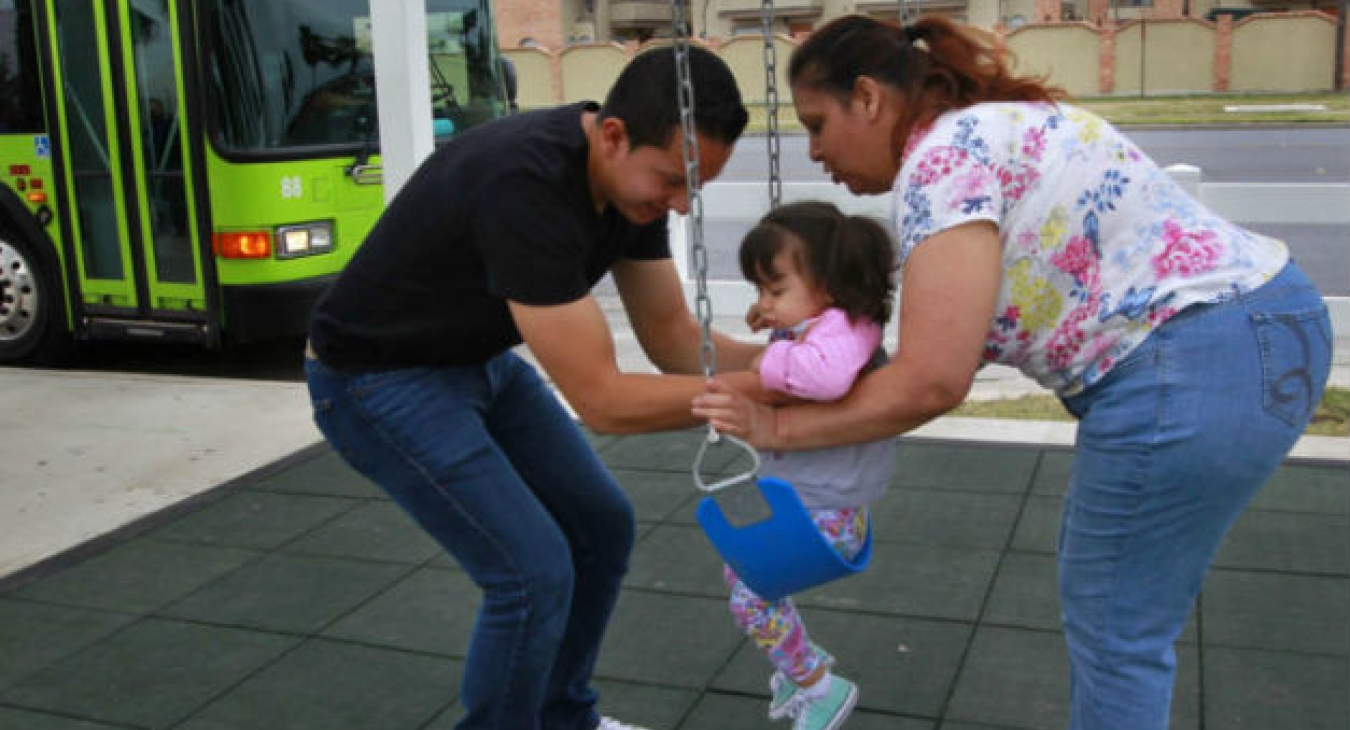 photo by Nathan Lambrecht of the McAllen Monitor

Sit and wait. That’s what most people do at bus stops.

Robert de León, a business management analyst with the city of McAllen, thought people could be more active while waiting for buses in McAllen, Texas (85% Latino).

In fact, he and other McAllen city employees wanted to turn a bus stop into a play area with swings, hopscotch, and fun for the whole family.

Could they turn a sit-place into a play-place, and boost health in McAllen?

The Sorry State of Health in Hidalgo

De León knows health is a problem in McAllen, the largest city in Hidalgo County (91% Latino) in South Texas, which sits next to the Mexican border.

In McAllen, 7.6% don’t own vehicles. Driving is expensive, costing Americans over $9,000 per year to operate a minivan or medium SUV. It’s even more expensive in McAllen, Texas, with the second-highest annual auto insurance rates in Texas.

Yet decades of inequity in investment in streets, sidewalks and public transportation across the country have disproportionately burdened Latino communities with health disparities, traffic fatalities, and even criminal citations for jay-walking.

Bus Stops as a Health and Transportation Solution

Yet there are some sorry bus stops out there. Streetsblog even hosts an annual tournament for the Sorriest Bus Stop in America. Sorry bus stops crush any sense of neighborhood pride. Unsafe sidewalks to get to bus stops may prevent families from accessing public transportation or put them at risk of traffic fatalities.

A bus stop can be so much more than dangerous places to sit.

A bus stop is an untapped location—just like parking lots, staircases, and sidewalks—that cities can use to encourage active play and incorporate play into normal daily routines. A playful design may even inspire community pride and civic trust.

In 2016, de León and his McAllen city colleagues learned of a KaBOOM! grant for out-of-the-box play spaces in unexpected places.

“Our grants department, who I used to work with, reached out to our department at transit,” de León said. “They asked, ‘hey, is there anything we can do to apply for this community award challenge opportunity?'”

After reviewing some information from a webinar, sent by his friends at the grants department, de León learned that KaBOOM! was looking to help communities transform a public space into a place where kids would have an opportunity to play.

It was a perfect fit for their bus-stop-play idea.

At first, the team thought about adding hopscotch and other games to sidewalks, but de León thought why not add swings, too?

He had recently been to the park with his wife and remembered just how much fun it was to ride swings as a kid.

The team drew further inspiration from an image they saw online of a traveling swing set that plays music. 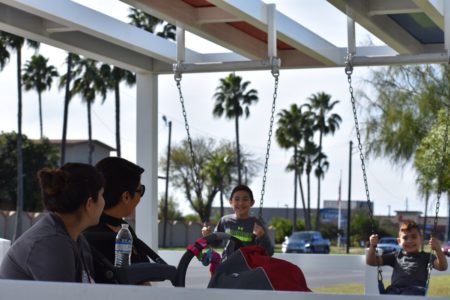 Turning an Idea into Reality

They proposed adding swings, oversized musical instruments, and games painted on to the sidewalk for everyone, not just bus riders.

They also wanted to move the play space back away from the street and traffic, where the McAllen public library is located, and encourage people to walk.

“The vision is to transform an underutilized area into a multi-dimensional and colorful nontraditional bus stop where, in an age of phones and tablets, children and riders remain active,” grant writer Carla Rodriguez said, according to one source.

“It combines transit with promoting health,” said Mario Delgado said, according to one source. “It’s a small project in terms of size, but the benefits of it are going to be substantial.”

The bus stop now features a bench, 12×12 canopy, two swings, as well as a path with painted hop-scotch and maze that lead to the library.

The bus stop also features solar-powered lights, so it’s lit up around the clock.

The bus stop serves more than 1,200 people between the city’s bus station, the public library, and the University of Texas Rio Grande Valley, according to de León. Additionally, it serves folks who commute between cities located in the lower Rio Grande Valley.

“It’s also part a regional public transportation service where for $5 dollars a day people can commute between McAllen to Brownsville and South Padre Island, with stops in Mercedes, Harlingen,” said de León.

Now dubbed as the “smallest city park,” de León’s “crazy” idea of adding swings to a bus stop appears to have paid off.

“We’re very proud of it and I’m glad they went with my crazy idea,” he said. “There’s no crazy idea that’s crazy enough…You’ve just got to be creative.“

Check out KaBOOM!’s Play Everywhere Gallery for ideas you can implement in your community to help build a culture of health.