Art + Play at the Seattle Center 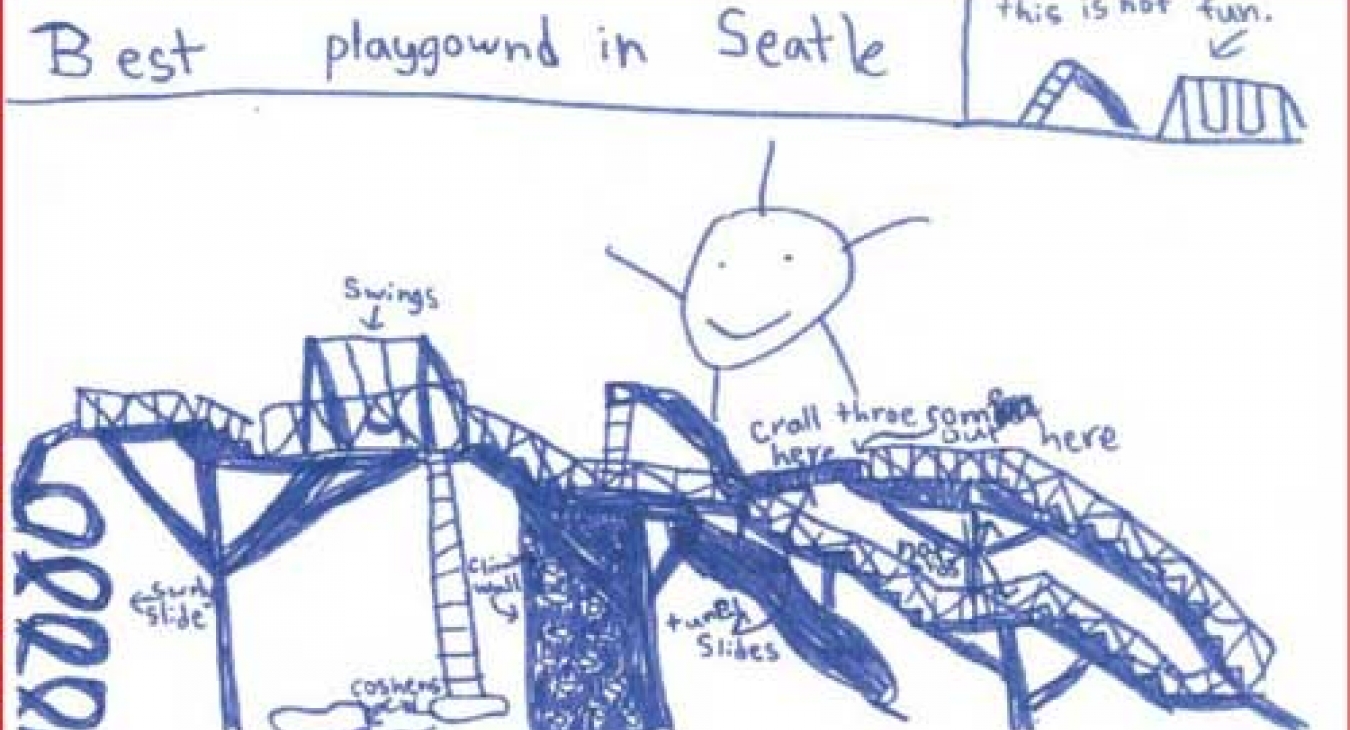 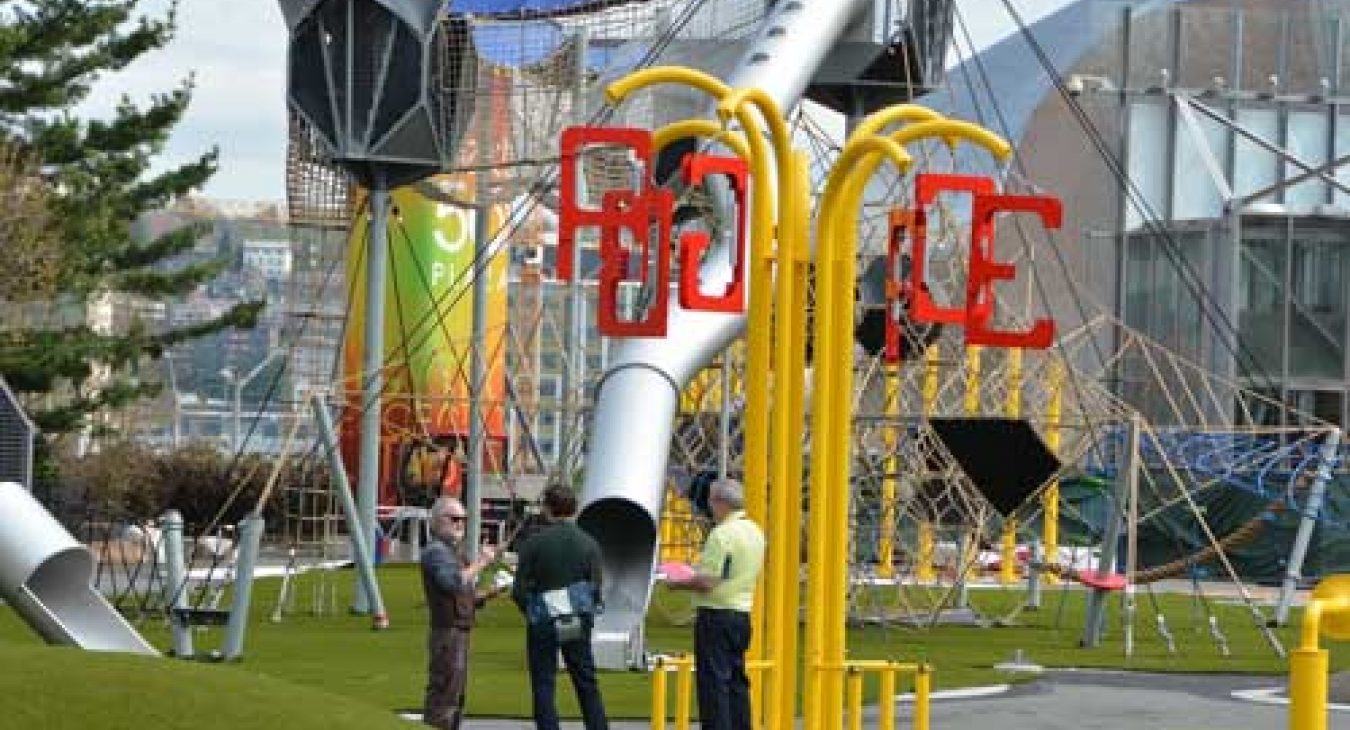 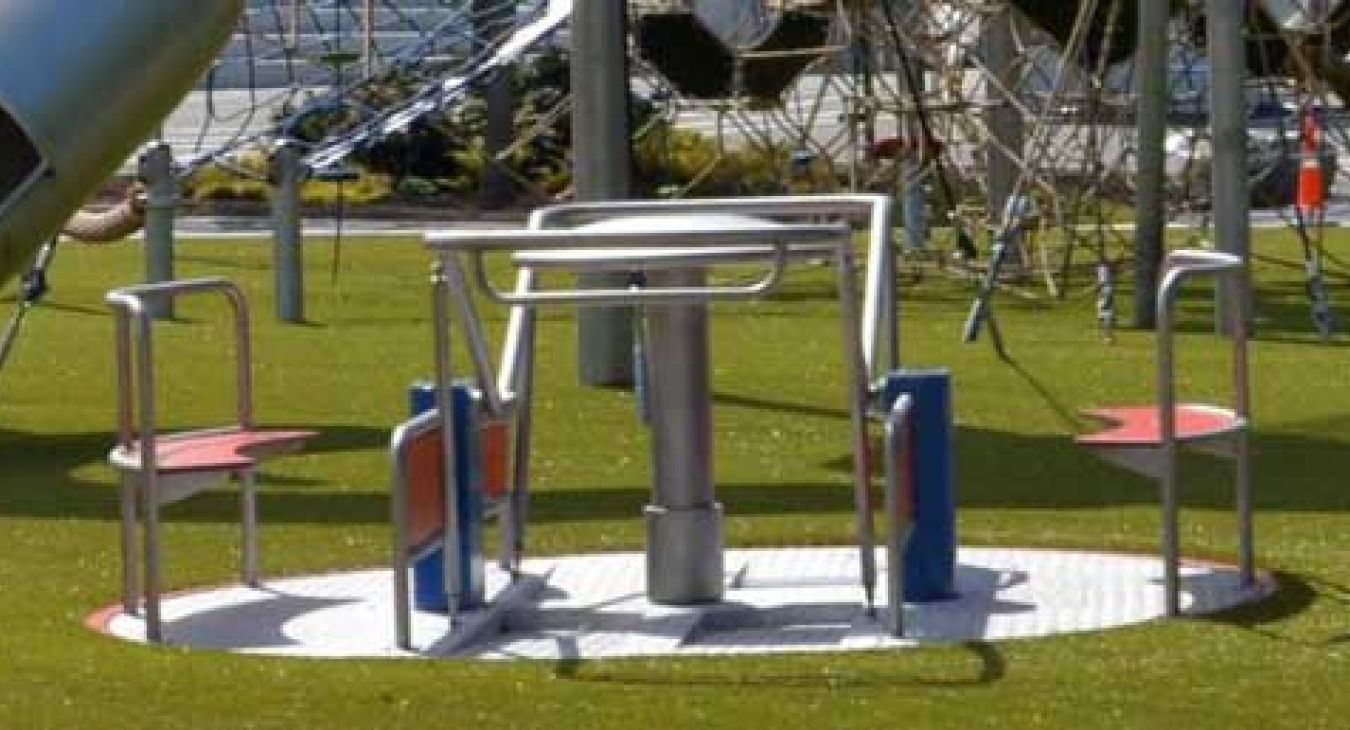 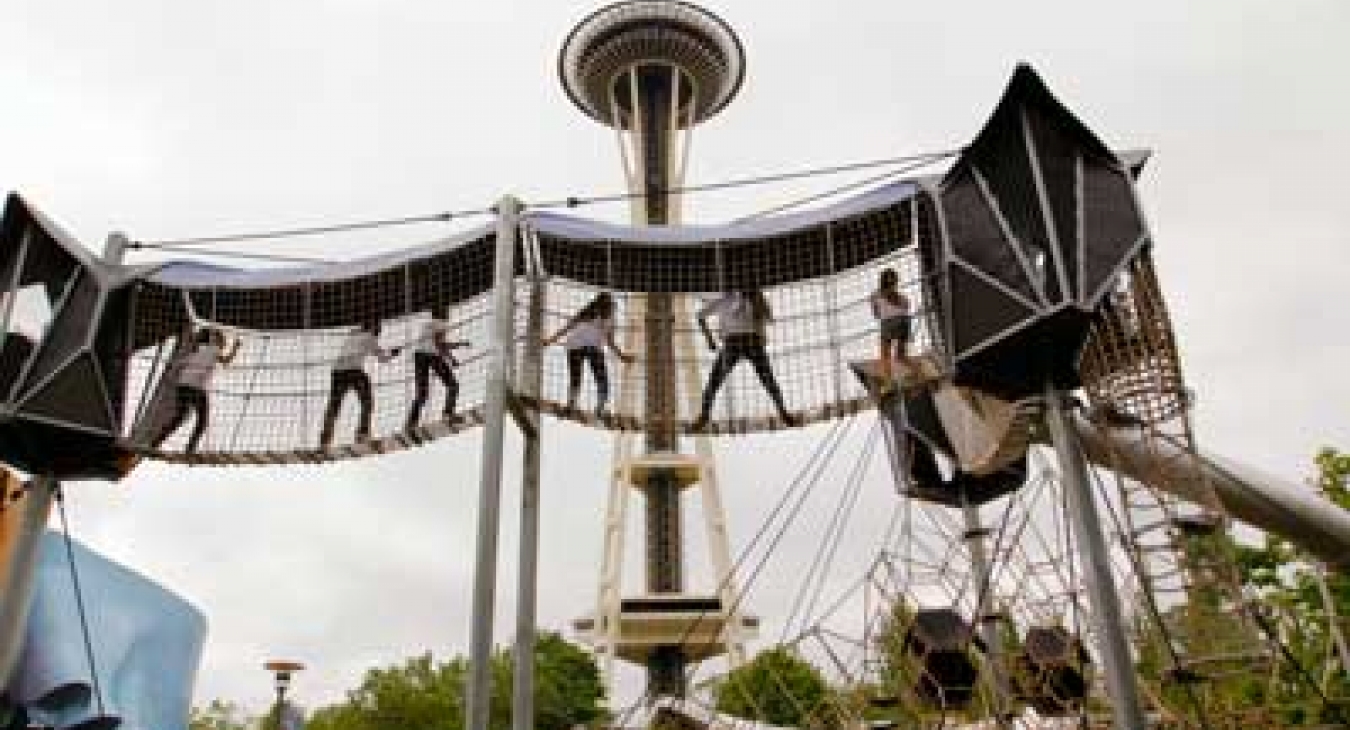 The Seattle Center, home of the iconic Space Needle, has become Seattle’s locus of community engagement. On the 74-acre campus, the Seattle Center hosts over thirty separate organizations whose venues and programs feed the community spirit with unique and inspiring opportunities to share, learn, and engage in nearly 5,000 cultural and sporting events. The purpose of the Seattle Center has always been to create exceptional experiences and environments that delight and inspire the human spirit and build stronger communities, so when a three-acre plot needed a facelift, an intricate, multi-disciplinary urban design project called Art and Play was initiated, but its core inspiration came from the community’s most important demographic: its children.

A passionate and enthusiastic group consisting of two artists, a landscape architect firm, and a playground equipment distributor came together to propose what they thought was the ideal Seattle Center play space. With such diverse skills, high expectations, and numerous stakeholders, the design team faced an incredible creative challenge, but during their project research, they found their inspiration.

“The park [design] was inspired by a drawing done by a little girl in 2008 when the Seattle Times challenged school-aged children to draw the kind of play space they wanted for the Seattle Center,” recounted Seattle-based metal artist Judith Caldwell.

This drawing represented a dream—the ideal playground from the point of view of a child—but the team saw possibility and practicality within the dream’s vision. Playground specialists Highwire Inc., saw the KOMPAN Sky Walk within the child’s drawing. The Sky Walk was not available in North America at the time, but its elevated form and multi-use design met many of the project’s challenges, but more than anything, it was proof that the child’s drawing was not just an impractical dream.

Center Art, LLC is a privately owned business of the Howard S. Wright Family, the same group who built the Space Needle for the 1962 World's Fair. Center Art, LLC gifted $1 million for development of the Artists at Play playground as part of a community partnership agreement to provide educational opportunities and other social benefits to the general public. In addition to this philanthropic gift, the Seattle Center allocated approximately $700,000 for landscaping, terracing, and the construction of a patio to further revitalize the play area.

The design team that won the Seattle Center’s call for a playground design included artists Trimpin and Judith Caldwell, landscape architect firm Site Workshop, and playground specialists Highwire, Inc. “Our team knew right from the start that the focus has to be on kids…as an iconic space, our design should offer a play space that kids can’t get anywhere else” said artist Judith Caldwell. Both Trimpin and Caldwell were tasked with translating children’s ideas and stories into art. “Often kids don’t have the words to express their thoughts but when illustrated, their stories are wonderful,” Judith added admiringly.

Sound artist Trimpin is widely known for his ingenious talent for creating symphonic sounds from Dr. Suess-like gadgets, doohickeys, widgets, doodads, and thingamajigs, objects far removed from what most consider to be musical instruments. His sound sculptures and installations are located across the country with some of his most notable work at the Seattle-Tacoma Airport, the New York Hall of Science, the Portland Art Museum and his Perpetual Motion piece at the Phaeno Science Center in Germany.

Judith Caldwell is a metal artist whose Flying Fish installation at the Seattle-Tacoma Airport brings a smile to both Seattleites and visitors from around the world. Caldwell has an incredible ability to bring stories and images to life through metal casting. Some of her public pieces include the bronze sculpture “Medical Philately” at the Seattle Community College, the “Blue Sky Baskets” at the White Center Community Center in Seattle and “Pillars of Industry” at the Everett Train Station. While sculptures by Trimpin tickle the ears with wonderful sounds, Judith’s bronze inlays visually express the poems and stories as told by children. Judith also designed a bronze interpretation of the drawing that had given the entire team its inspiration and it became part of the play space.

The landscape architect firm, Site Workshop, was central to the design team as their role was to blend the artwork from the artists with fun and exciting play. “It’s not easy to strike a balance between beauty and play...but our team was different because of the collaboration between our diverse team members” says Clayton Beaudion, Principal at Site Workshop. The firm was adamant that a strong community engagement strategy be part of the design process. In fact, Site Workshop created an engagement plan that included presentations, stakeholder meetings and briefings, community outreach workshops and open houses. “We felt it would be beneficial to engage all stakeholders including the Experience Music Project Museum (EMP), Seattle Children’s Museum, the Seattle Center, and the Seattle Children’s Play Garden; a nature-based program for children with physical and mental disabilities.” In total, members of the design team attended over fifteen different events to persuade children and adults to share their imaginations, creative ideas and words for the play space. The community engagement process was considered a very important component as it helped to shape the final design. “Our team had three major design considerations: play value had to be high; comfort for guests; and flexibility of use” explains Clayton Beaudion.

As a Certified National Playground Safety Inspector, Peter Tammetta from Highwire provided his expertise in selecting play equipment that was not only entertaining for children of all abilities, but also safe. While it was Site Workshop's role to bridge art and play and create a design that fit with the existing infrastructure, it was Highwire that pointed out the KOMPAN Sky Walk play system eerily corresponded with the play structure depicted in the 2008 drawing.

“The idea behind adding art to play came from the Wright Family: it was important that there be a strong art integration and that it be inclusive” says Layne Cubell, Planning Advisor for the Seattle Center. In an effort to unite sound with the art pieces and play structure, children were requested to share stories about the interesting sounds they hear every day. These stories evolved into the nine distinct sculptures installed in the park:

“Child development and accessibility were two very important considerations when designing this space,” says Clayton Beaudoin from Site Workshop when talking about the many play elements that were considered for the park. He further adds, “a wide range of ages had to enjoy the park.”

The custom play structure was designed by KOMPAN’s Design Studio. Known around the world as a special task force of engineers, landscape architects and child specialists, this group has designed some of the world’s most original play structures. The design for the Seattle Center was made to parallel the play elements described in the 2008 drawing: a stainless steel swirly slide, a tunnel slide, a swinging bridge on the top, the Giant Octa net as the climbing wall, and covered swinging walkways to offer crawl-through opportunities. The tallest point on the Sky Walk is 29 feet and 10 inches.

Combining art and play is nothing new for KOMPAN. Over forty years ago, a young artist named Tom Lindhardt Wils witnessed an event that changed the world of children’s play forever. One of his bright, large sculptures had been placed in a new housing development to add color to the otherwise monotonous surroundings. Realizing that children were more interested in playing on it than admiring it, he established KOMPAN.

“Integrating equipment that provided opportunities for children with disabilities to play alongside their friends” was a must-have for Clayton Beaudoin and Seattle Center Director, Robert Nellams.

A miniature version of the Sky Walk was created and incorporated an ADA cabin with a slide, accessible stairs and a climbing net. The integrated carousal accommodates children using wheelchairs and able-bodied children. An ADA swing was installed alongside traditional and dish-shaped swings.

To bring elements from nature to the play space, “real boulders and rocks with small indentations were added” alongside natural logs “with real bugs and bark peeling”, adds Clayton Beaudoin. The “coshuns” in the original drawing were accomplished by using Forever Lawn, a cushioned artificial turf recommended by Site Workshop. The grassy mounds in the park, also built using Forever Lawn, represent the crest of sound waves. “During the engagement process, one disabled child talked about loving mountains” said Clayton Beaudoin. “Topography change is very important for play value. They provide seating opportunities for parents and caregivers, sliding opportunities for kids, rolling opportunities for kids, everyone is enjoying the mounds”, reports Beaudoin.

There is an overwhelming consensus that the success of the project was due to the joint effort put in by all team members and stakeholders. “The success of the project was the result of the collaboration between all stakeholders. Despite everyone having different ideas, the project came together. Artists had the freedom to be creative while the staff at the Seattle Center played a role in keeping the project on target”, declared Layne Cubell from the Seattle Center. Judith Caldwell agreed: “There were a large number of people involved however with enough well intended people, with patience, they can create something spectacular.” For Clayton Beaudoin and his colleague, landscape architect Matt Wood, what made this project different from other playground designs was collaboration and customization. “We had close collaboration with artists. There is a lot of interaction in the park, which is a direct reflection of the interaction of the team working together harmoniously.” Because of the ability to customize products in the park, Beaudoin felt they were able to meet the goals of the Seattle Center. “Customization of the park made the experience very rewarding professionally. Everything came out the way it was planned, which was very gratifying.” While Site Workshop pushed the budget to get a few items like the artificial turf and more pebble play for the younger children, “the Seattle Center was supportive and willing to take the risk.”

Judith Caldwell says, “The entire project was a real community initiative with the children’s drawings starting out the inspiration, and the many stakeholders who participated in the planning and installation. The staff at the Seattle Center had the strength to manage the artists and were willing to take the risks suggested to make a fantastic space. The Seattle Center trusted the team completely, which is very important for an artist.”

Overseeing any large multi-dimensional project like Artists at Play has its usual challenges: managing all the stakeholders, keeping it on track, on budget and on time. Layne Cubell says, “the staff at the Seattle Center all played a key role in keeping the momentum moving forward and holding the vision despite the public and political scrutiny. “ She further adds, “while there was a long period of waiting, the results were worth it. It’s a unique and aesthetically beautiful setting, really a dream urban setting.” Matt Wood from Site Workshop says, “the park fills a need in downtown Seattle where there are not a lot of play opportunities.” While following some high-schoolers at the Grand Opening of the park, Beaudoin overheard them say, “Wow this is a beautiful playground.” The results far exceeded the expectations of the design team because they were able to navigate the initiative’s complex requirements, satisfy the many project stake-holders and still surprise and delight the region’s community with the Best Playground in Seattle. As Caldwell puts it, “this park was truly a “child-designed” play space.”

Top photo: The first Sky Walk in North America is at the Seattle Center.