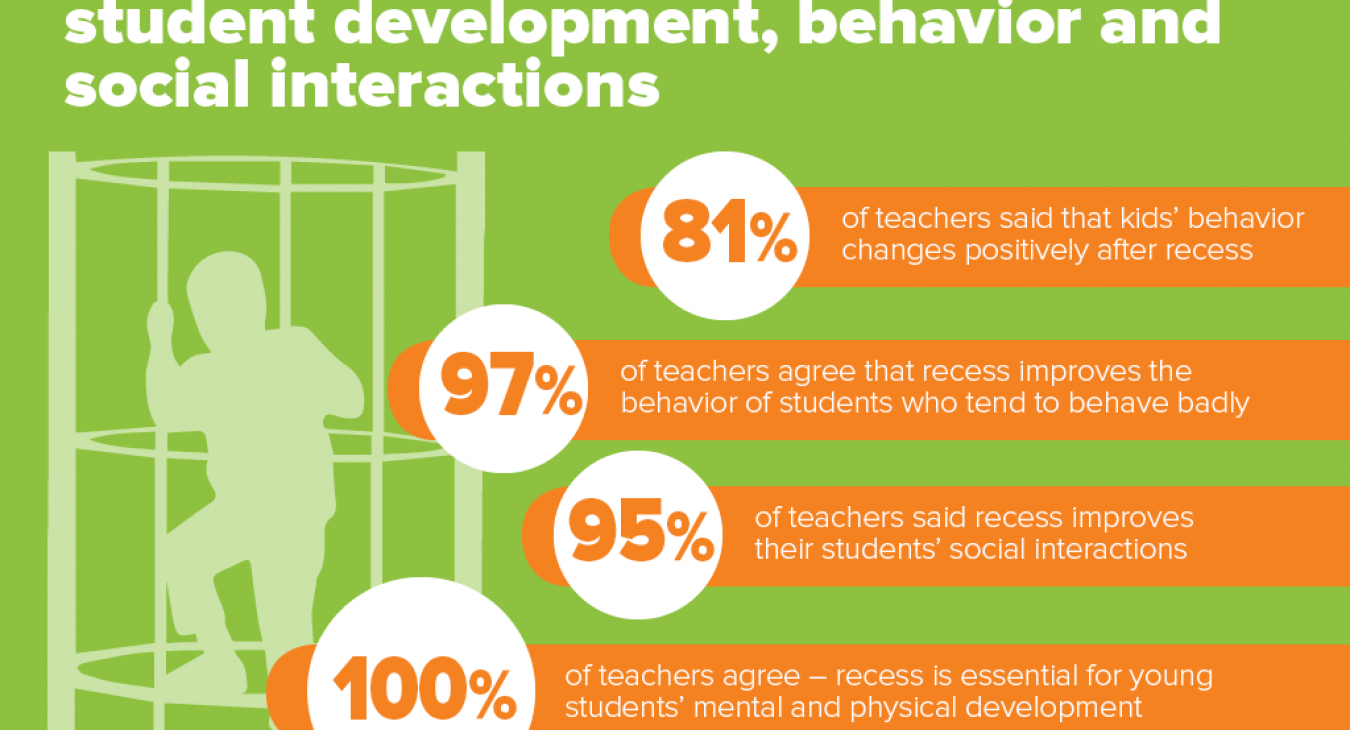 Graphics courtesy of the Voice of Play

Research shows that outdoor free play gives kids many valuable benefits, including the growth of physical, emotional, social and cognitive skills. And teachers agree, according to the second annual Voice of Play Survey. The survey of 500 U.S. elementary school teachers was conducted by Wakefield Research on behalf of the International Play Equipment Manufacturers Association (IPEMA), the playground industry’s leading playground safety certification organization, and its Voice of Play initiative. Among the findings was that each teacher surveyed – 100 percent – said that recess is essential for young students’ mental and physical development.

The survey also found that most teachers see positive impacts in student behavior, as 97 percent said that recess improved the conduct in students who tend to behave badly, and 95 said that their students’ social interactions improved when they played together outside. Teachers are also using recess as a motivator. Nearly two in three said they use recess to motivate their students, although 86 percent have at one time decreased or taken away recess time as punishment for bad behavior.

“Play shouldn’t be seen as extracurricular or a form of punishment, or even optional, but rather a right for every child,” said Tom Norquist, IPEMA President. “Play is essential to a child’s development, so it’s exciting to see teachers are aligned with the National Institute for Play’s scientific evidence of the developmental benefits of a playful recess.”

Of those surveyed who said their school did not offer recess, the reason was that it was either due to additional time being needed for academics due to poor student performance or due to the school day being too short to include time for recess. IPEMA’s Voice of Play initiative promotes growth in the quality and quantity of children’s free play and the use of playgrounds, and it hopes this data will shed light on the importance of recess, and that every school will keep it a regular part of the school day.

The preferred way to play? Outdoors, unstructured, and on the playground

Of the teachers surveyed, 93 percent said that their school currently offers recess for its students, and the average length is 25 minutes per day. The U.S. Centers for Disease Control and Prevention recommends 20 minutes of recess per day. The primary location of recess, according to 87 percent of those surveyed, is outdoors and on a playground, and 89 percent said children are supervised all the time during recess. About half do not have structured recess (meaning they participate in activities chosen by the teacher or other school faculty). 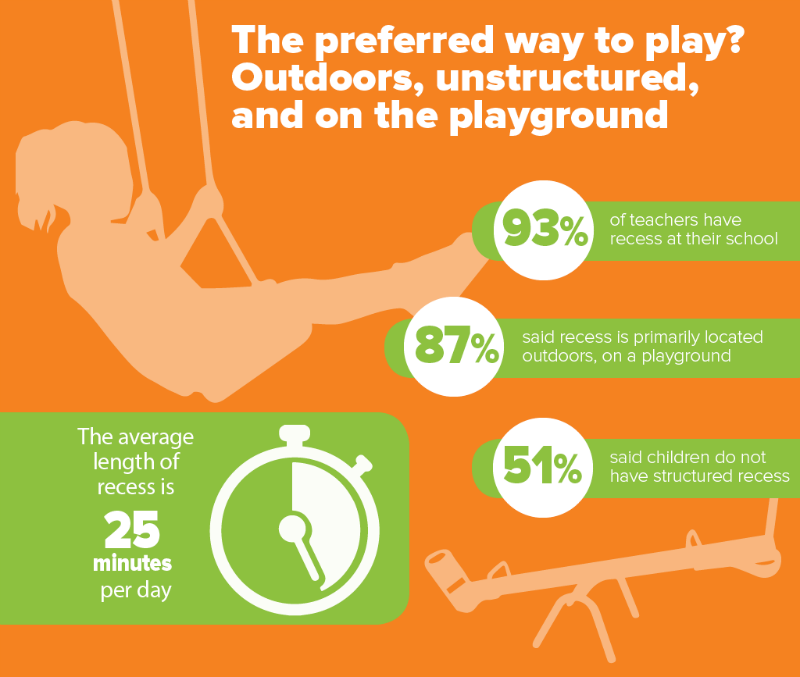 Teachers use recess as a motivator

Nearly two in three elementary school teachers use recess to motivate their students, and 86 percent have at one time decreased or taken away recess time as punishment for bad behavior. Teachers also said they benefit from recess, too – 64 percent said that recess allows them to take a break and collect their thoughts and recharge, 38 percent said it gives them an opportunity to plan the rest of the day, and 26 percent said it allows them to play and exercise as well. 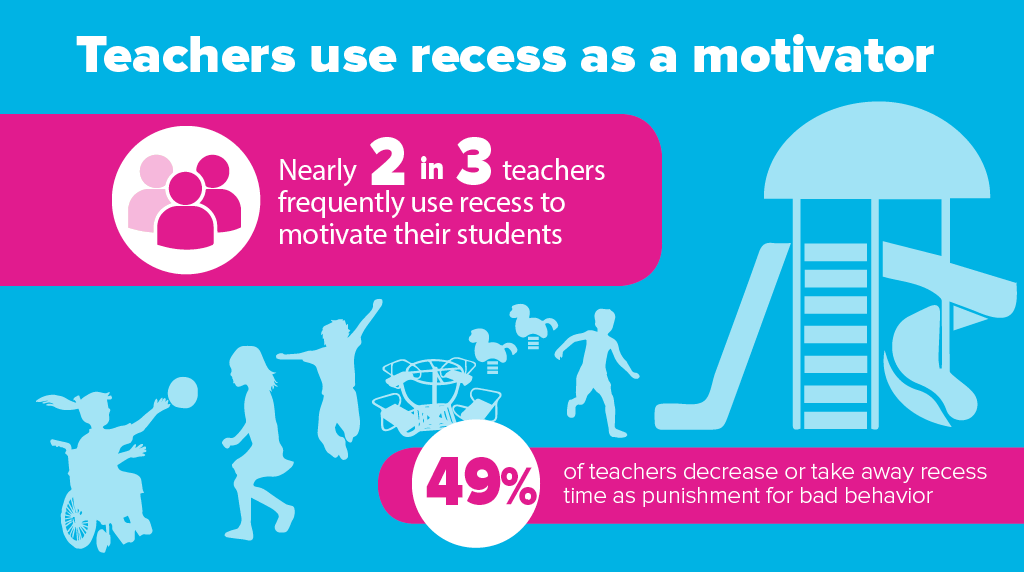 After recess, 81 percent of teachers said that kids’ behaviors change positively. These changes include more positive moods, longer attention spans, fewer behavior issues, increased participation in class, more eagerness to learn, and improved academic performance. In terms of students who tend to behave badly, nearly all the teachers surveyed – 97 percent – agreed that recess improves their behavior. Also, 95 percent agree that recess improves their students’ social interactions, 78 percent noted their students are focused and ready for their next lesson when they return from recess and 100 percent said recess is essential for young students’ mental and physical development.

Bullying is real, but teachers agree recess can help

Across the U.S., bullying remains an ongoing issue, and 67 percent of the teachers surveyed said at some point, they have observed this behavior among students, including 38 percent before recess, 55 percent during recess, and 39 percent after. Among those surveyed, 64 percent of teachers agree that recess reduces bullying. 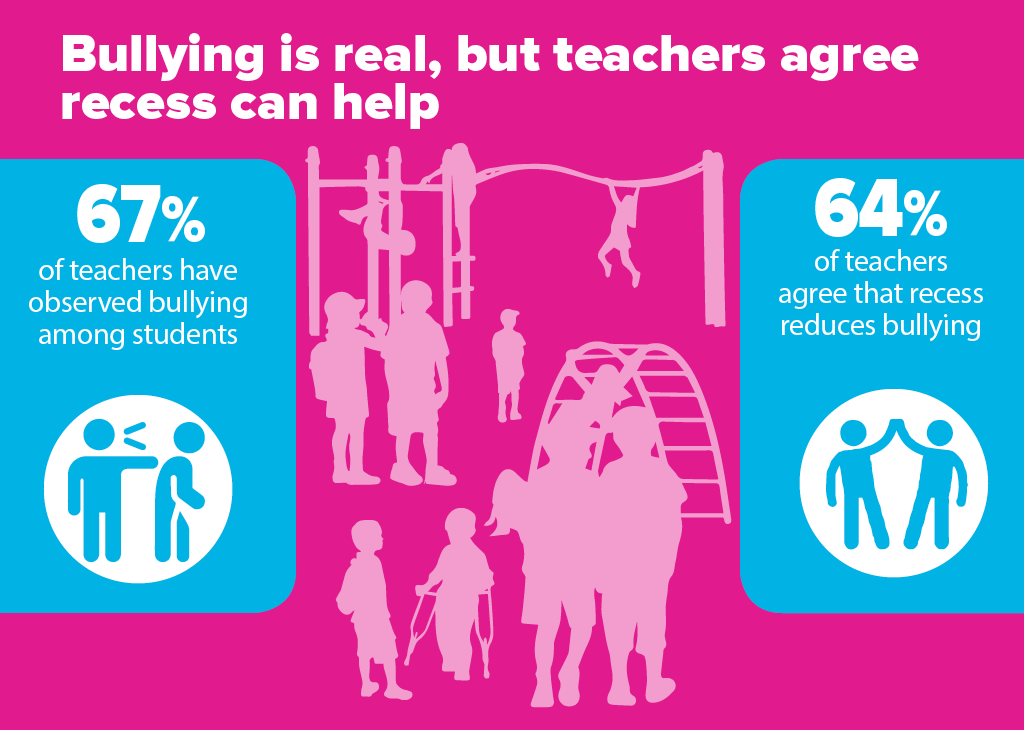 To learn more about the benefits of play, visit VoiceofPlay.org.