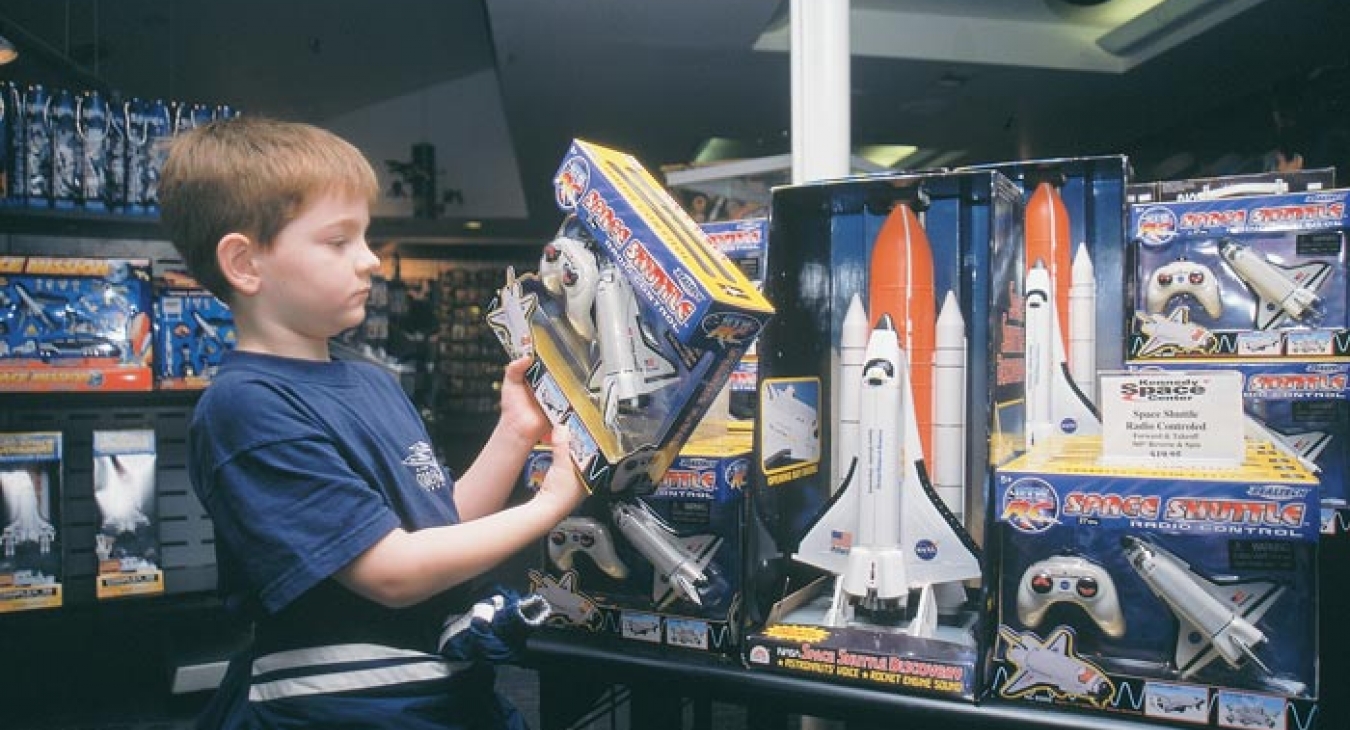 Why the interplanetary playground is so popular

Only the squeals, squeaks, giggles and laughter of children at play can replace the terse NASA countdown commands. The excitement level is approximately equal and the locations are in close proximity.

The interplanetary playground within the Kennedy Space Center Visitors Complex equates favorably in the minds of the junior astronauts to the real Launch Complexes where America’s authentic space heroes begin their interstellar journeys.

The cast of characters is roughly the same. Most are Americans with a scattering of international visitors for each mission. At the Space Center’s launch pads, the astronauts have come from around the world; Japan, Canada, Russia, United Kingdom, Poland, and Israel. On the space shuttle play structures under the domed playground at the Visitors Complex, the ratio of children was the same. The foreign visitors come from all over Europe, Central and South America, the Middle East and from the Orient. 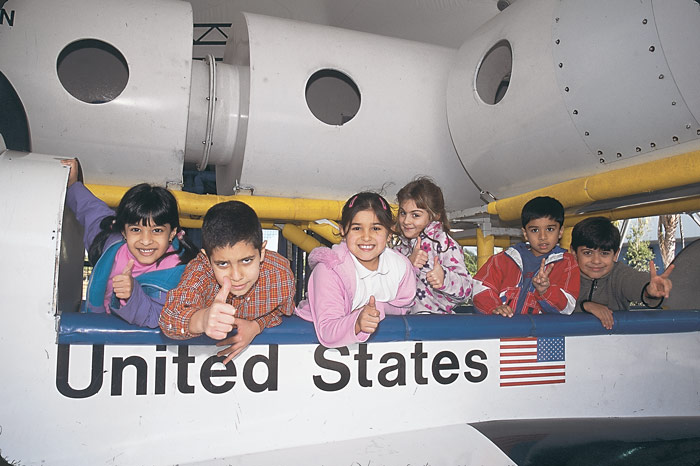 Delaware North Parks Service, (DNPS), NASA’s Visitor Center Complex operator, has gone above and beyond expectations to create a playground that stimulates the high levels of interest and excitement generated by the overall facility.

The playground was created as part of DNPS’s recently completed $130 million redevelopments of the Space Center’s Visitor Complex. It is now an integral part of the historic Rocket Garden, a collection of eight vintage rockets from the Mercury, Gemini, and Apollo space programs.

DNPS had three space capsules fabricated by Museum Productions as part of the rehabilitation. They were built from fiberglass and stainless steel to withstand both the harsh weather elements of Florida’s East Coast and the rigors of daily use by the older aged children. These older visitors can now climb in these replicas, complete with working knobs, dials and switches, and experience precisely how crowded the real things were. The capsules were designed and fabricated to incorporate and meet the latest playground safety standards. Included in this was any possibility of occupant entrapment. 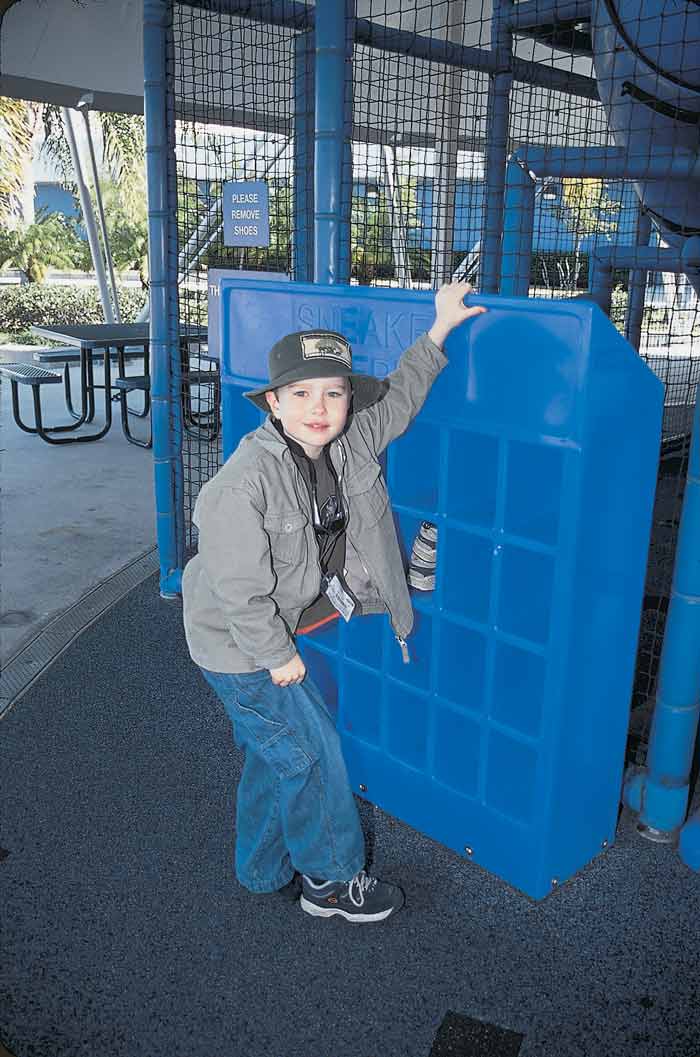 Under the protective playground, dome are a scaled-down space shuttle mockup and the elements of an International Space station. Incorporated within these are slides, ladders, crawl spaces and monkey bars. The space shuttle has a cockpit, complete with joystick controls, and an open cargo area for a junior-sized crew of make-believe shuttle astronauts.

What is not make believe about this out-of-the-world playground is the real-life experiences and lessons both the children and their parents take home with them. With all the animosity between the Christian and Muslim faiths, a visit to the Visitor Complex by a class of 26-second grade students (ages 7 and 8) and their teachers from the Muslim Academy of Central Florida had some very positive, unanticipated results.

The students had been attending a session at the Exploration Laboratory at Kennedy Space Center and the teachers had brought them to the Rocket Garden and playground for recess. As the children scrambled uninhibited over, under, through and around the play structures they interacted with many children of several other faiths. In their innocence, they played together in a spirit of brotherhood with nary a crossword, fight or disruption, nothing but the unbridled joy and exuberance of childhood.

“The first activity the children will have when they return to the school will be a writing exercise regarding what they experienced and learned. The second will be a discussion of the field trip and a sharing of what they learned from the experience,” commented teacher Farida Ibrahim.

In another instance, Senor Adolfo Zarraga from Marca, Aragua, Venezuela, expressed the opinion that it was very important for children especially, to learn about the universe, not only about their own country, and how to interact peacefully with other peoples of the world. At the time, Senor Zarraga was photographing his two young daughters (ages 5 and 8), having an encounter with a “spaceman” suited in astronaut External Vehicle Activity (EVA) attire.

Several other features of a visit to the NASA Visitor Complex should also be noted. Educational and unique, Mad Mission to Mars magically transforms children to “Astronaut Trainees.” Children are guided on an interactive journey through the cosmos where they learn the basics essential for an astronaut to live and work in space. 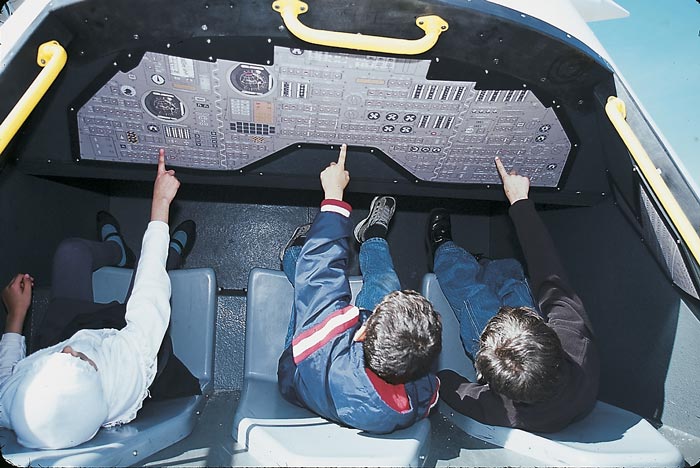 Mr. and Mrs. Rob Hebert and their children, Daniel (age 13) and Andre (age 7), of Breaux Bridge, Louisiana, were quick to avail themselves of one of the more exciting events instituted by DNPS & NASA to personalize a trip to the Visitor Complex. It’s included in the price of admission and called the Astronaut Encounter. During this show, youngsters get the chance to come face to face with a real astronaut.

For those wishing a more in-depth encounter–­at a slight additional charge–there is now the opportunity to participate in the “Dine With An Astronaut” program. Parents and their children get a video presentation, a briefing of his mission(s), have lunch and the opportunity to ask questions and pose for pictures with an astronaut who has actually made one or more trips into space.

In perhaps saving the best for last, almost every young child to the Kennedy Space Center Visitor Complex hopes for the opportunity of seeing an actual launch of a Space Shuttle.