Playful People and Where to Find Them 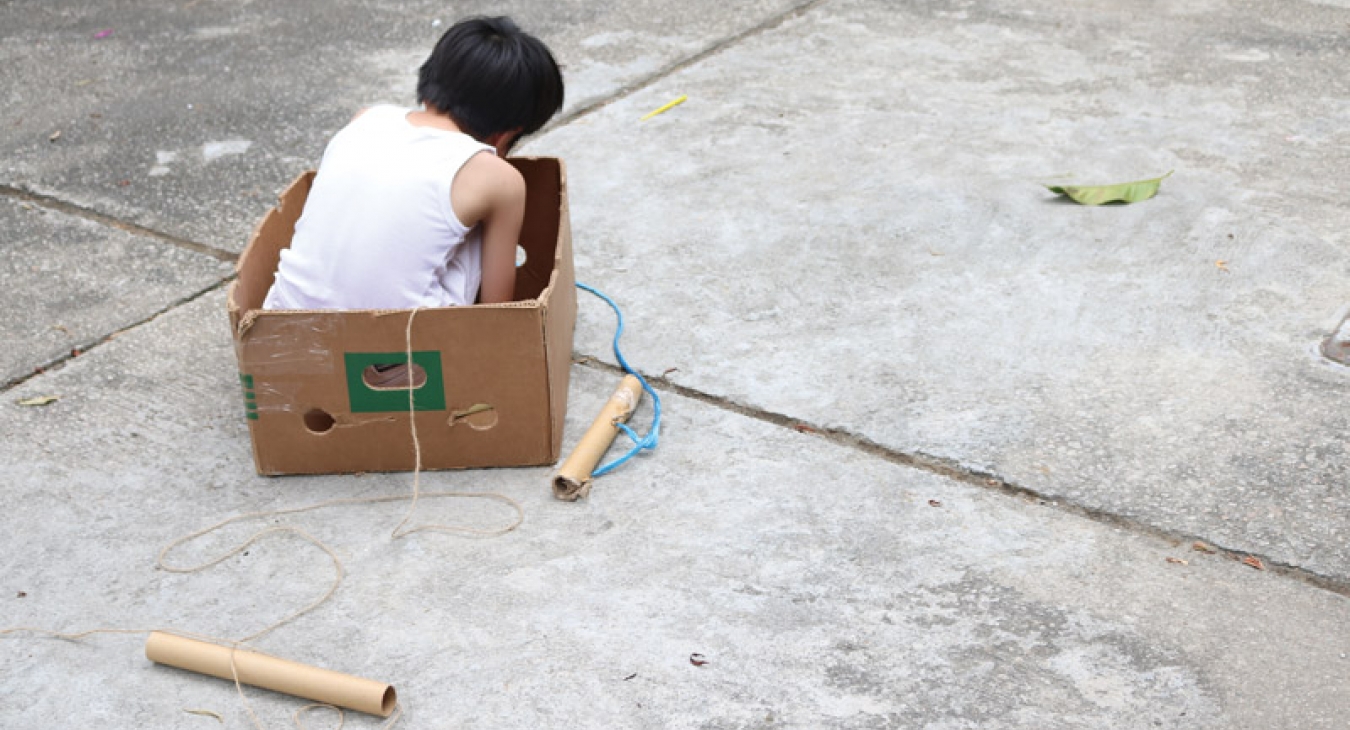 We believe that play is the sign of a healthy community. When children spend time outside, climbing trees or on their bikes, we know several things: adults feel comfortable letting their children roam, children know their neighbors, and everyone feels able to make use of public space for their own pleasure.

What's more, we believe that playing outside is a catalyst for healthy communities. Children are our most vulnerable citizens, and when their rights to participate and enjoy public space are assured, everyone benefits. These beliefs are behind all of the work we do.

Our background is in UK-based playwork, a professional approach to supporting children's play, with its roots in the post-WWII adventure playground movement and an absolute focus on valuing play for its own sake. Play is an instinct we all share, and a drive we must pursue. For people of all ages, there are so many barriers to play — fear of public space, fear of strangers, tight schedules and hard responsibilities, even the simple fear of looking ridiculous. The best way we have found to overcome these barriers is to set aside time, space and materials, and to give explicit permission to play. Here, we say, is an opportunity to imagine and explore. Here, we promise, is a chance to take creative risks without judgment. We provide recycled materials that cost nothing, making it easy for us to give this permission and mean it.

The pop-up adventure playground model that we developed can help ourselves and our neighbors overcome barriers to play, together.

The idea is simple, bringing together people and materials for play in a public space and applying the very basics of playwork practice. Anyone can register for free through our website, and get support in organizing their own. It began as a little idea, in response to the combination of barriers we saw most often in the US. We wanted to spark new conversations about risk, freedom, and connection, and to celebrate play. 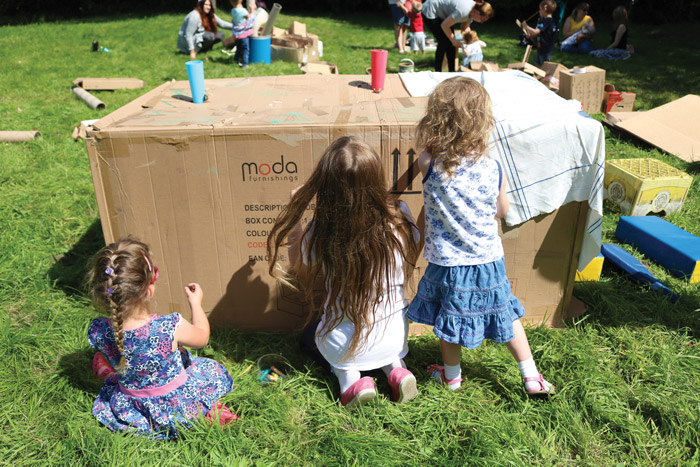 We held the first pop-up adventure playground in 2007, in New York City's Central Park. It was part of a much larger festival and thousands of people came to visit the areas run by Disney, LEGO, Sesame Street and others. To one side, tucked beneath the trees, we filled a space with all sorts of scrap — cardboard boxes, a sofa cover, several broken plastic blinds, a mountain of acorns and a wok. We had also brought friends to welcome parents and help out any children who asked. We had brought duct tape and several garbage bags for later.

In that little area, hundreds of people played. They built houses and cut windows to peer through at their neighbors, and when they grew bored with that, they connected the houses together in one long tunnel. Children positioned themselves at different points: one handed out tickets which another took, and an older child poked his head in through a window in the middle "to make sure they’re all doing ok." Towers rose and fell, tipped over slowly by children giggling hysterically. They cut fabric into superhero capes and saved the bystanders. They dribbled pebbles through long cardboard tubes and discovered that acorns rolled into a wok make a sound like miniature thunder.

Over that afternoon, dozens of adults came to shake our hands. Some said it felt familiar, to see children playing in this way. Others said it was like nothing they’d ever seen and did we know when the next event would be? It seemed we were onto something, so we put some information online.

Perhaps, we thought, other people are facing these barriers of time, fear, space and money. Maybe they’d like this idea. Now it is seven years later, and there are independent organizers of pop-up adventure playgrounds in seventeen countries around the world, in cities such as Bogota, Los Angeles, Cairo, San José and Hong Kong.

We are still doing community organizing around play, but now our "neighborhood" is the internet. 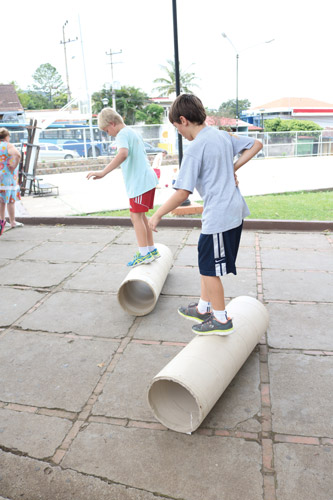 Each little ping that comes through our social media tells a similar story. It starts with the epiphany that play is important. Next is sadness, because play is not widely valued and the person feels alone in their new belief. Third, comes a fervent search for more information about play, and their reaching out to us and saying “I’m so glad I found you.”

This is also my story. As a teenager, I knew that play was much more important than people were willing to admit but was dismissed as being childish and immature. After years of searching for like-minded people, I finally discovered playwork and my life has never been the same.

Perhaps we were in the right place at the right time, but as our tiny organization logged into our first social media account, it seemed like we were starting a brand new adventure. Most play projects of the time were still focused locally, concentrating on meeting the needs of their immediate community. It was only a matter of days before the first messages began to come through in response to our photos: “How can I do this in my community?”

Since that moment, we have been connecting people all over the world to the field of playwork and to each other. Just as a playworker makes themselves available for play, our organization has opened its arms out to everyone, welcoming them to come and hang out. Six years on, we have a growing following on four different social media platforms with a weekly reach of 50,000 people. Feedback has been fantastic too: "You guys give me the boost I need every morning to take my kids out playing.”

It is no secret that we love play, but we know firsthand how isolating it can be. The limitless possibilities of the internet mean that we are never truly alone in our quest for play so just come and say hello — we are always here. 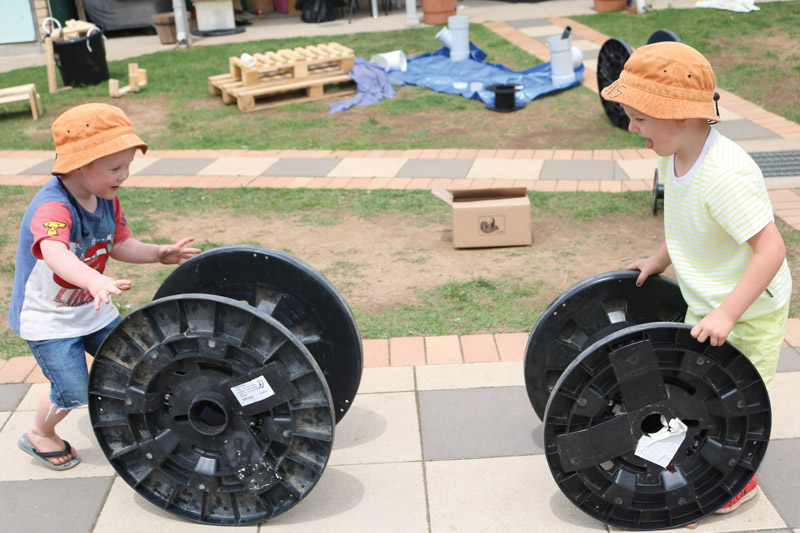 It started with an email from across the globe. A simple request, a shared vision and a common goal — Playful Communities. Playwork is often stumbled upon "by accident," although people are generally guided there by a combination of thoughts, feelings, and discussions with like-minded people.

Bellelli Education, based in San José, Costa Rica reached out to Pop-Up Adventure Play in 2008. They sought some reassurance in their quest and hoped to connect their child-centered philosophy to that of playwork from across the Atlantic. From that initial exchange, something sparked, connected, grew and flourished.

Today, driven by that same group of people, both Bellelli and Pop-Up alike, have come a long way in their quest to support children, families, organizations and interested parties in the promotion and development of dedicated time and space that is child-led, goalless and fun.

Bellelli, with both long distance and in-person support from our team, has hosted almost 30 pop-up adventure playgrounds (which they call PopAps) within their local communities. Over the years these events have grown in both size and understanding. Pop-up adventure playgrounds create a point of reference, a purpose, a trigger that brings people together in a positive way. They open up lines of communication and provide various levels of opportunity for people to contribute whenever or however they can. Some people organize, some bring resources, some stories, and others food, but sometimes people just bring themselves, and that, for some communities is a huge deal.

In addition to the almost 30 play events, our team has supported both Bellelli and their local community partnerships with a tailored professional development workshop as part of the 2015 World Tour while also supporting over ten students through the online Playworker Development Course.

Play isn’t just "What children do:" it isn’t just "messing about." It is an energy that is within us all, waiting for a space, an opportunity and the permission to spark the circuit and begin to flow.

We understand the barriers to play because we have felt them too. We can see firsthand the consequences of our busy lives, our packed schedules, and the constant valuing of work and productivity above all else. Pop-Up Adventure Play and the pop-up adventure playground model have opened up an opportunity for us to talk about all of this, and to help people start making changes in their local neighborhoods, professional settings, and in their own lives. Over seven years, we have found that this process creates its own unanticipated community, introducing new friends and bringing us around the world to visit them. Each time we share a meal and a story, or steal a moment of awe-inspiring discussion between playful engagements, we see how the shared and human instinct to play connects us across enormous distances and differences.

No matter who we are, where we live, what we have done before and what may happen in the future, play is something that can keep us together. To enter most fields of work, you need specialist knowledge, specific jargon and sometimes even fancy equipment. To discuss play, we can simply ask for you to think back to when you were a child, or help you get started playing now. Play reminds us that it’s never too late to experience the fun of creativity, to glue or smash or cut or tape. We all have the ability to send and receive cues for play, to become once again fluent in a language where communication can be as simple as throwing a ball, pulling up a chair to the table, or just sending a little email. We’re ready when you are — come and play. 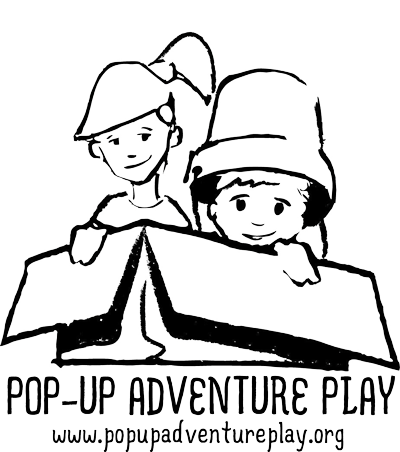