Lions and Tigers and Bears... and More! 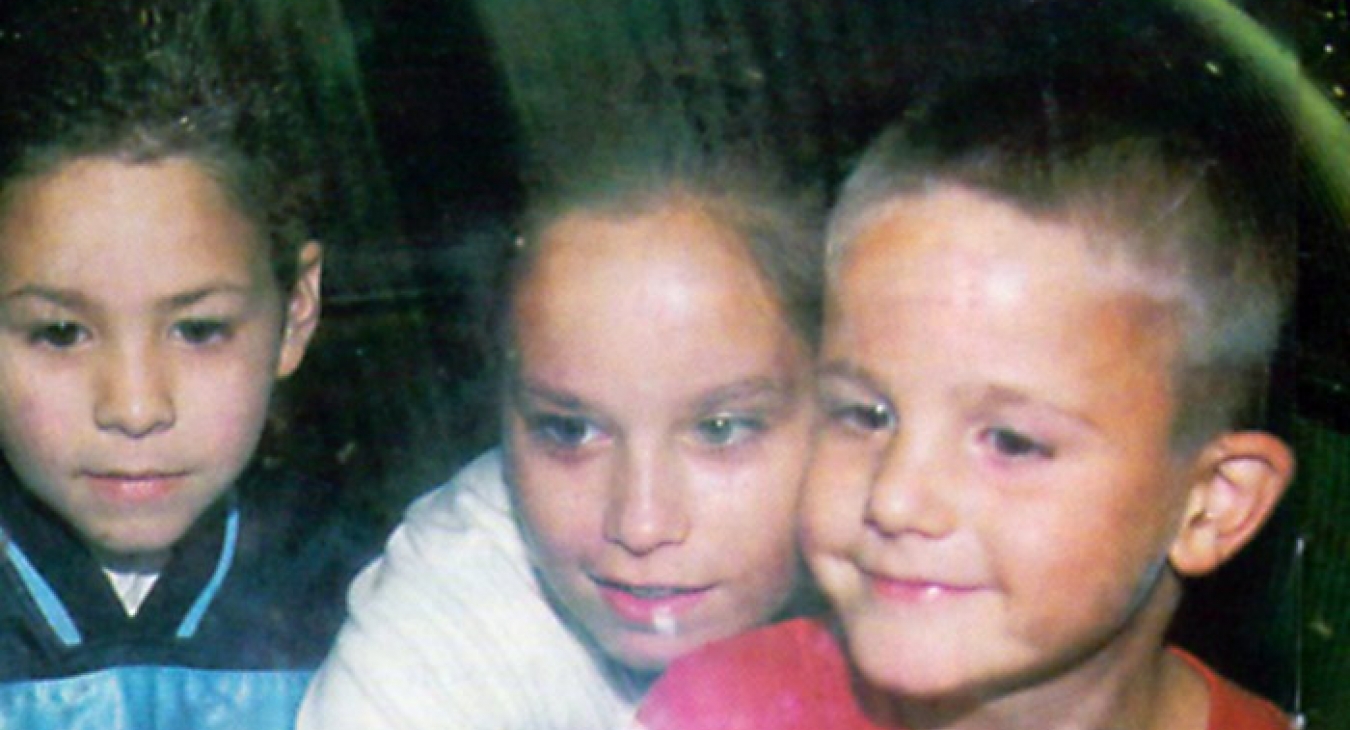 Young parents and small children in strollers interact with older children and live, small animals and unique playground equipment. There is a beautiful- larger than life-size bronze statue of a pair of playful river otters to climb through. It is an extremely popular home video filming location.

The most popular playground attraction? It is a see-through acrylic tube-slide that takes kids down through the underwater habitat of a colony of live river otters. Just to get to the top of the slide, children must climb up on Goat Mountain. With names like Larry, Moe, and Curley, the agile otters appear to be as curious about the kids as the children are about them.

At the "Just Like Me" area, kids can play and learn how animals are just like them. It is a known fact that both small animals and small children have need for unstructured playtime. What better place to combine recreation with education than at the zoo? At the "Dig Like an Aardvark" sandbox, children can play in the sand. Maybe Eddie, the armadillo, will join them.

Alice Feyfried, associate curator of the St. Louis Children's Zoo, said that several years ago the decision was made to upgrade the existing 29-year-old Children's Zoo. She explained the reason for the undertaking was to bring the facility more in line with the needs of today's children. With so much more competition for their time and attention, the changes were needed to keep the Children's Zoo at the forefront of their attention. When parents asked their kids where they would like to go, they wanted the answer to be the Children's Zoo.

With many dual-income families today, premium time with offspring is very limited. More than a few amusement parks, water parks, and other attractions are competing for their attention. There isn't the time to explore creeks, ponds, and farmyards today like there was at times past.

The zoo's governing board places a high priority on education along with recreation. What better place to combine both, than at the zoo?

As the squealing children happily emerge from the river otter slide, they encounter a maze of rope work to climb on, under and around. It takes a bit of coordination and some advice from their peers to get into and remain upright on the spider web. 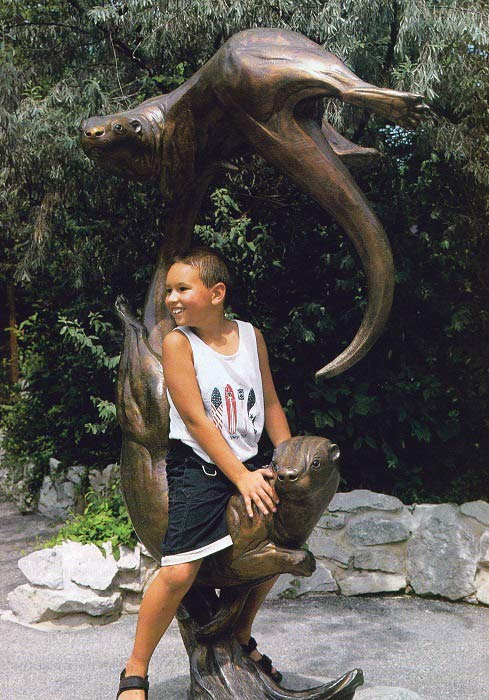 The bronze otter statue is a popular place for photos.

Safety and security are always uppermost in the zoo's concerns for children. There is always unobtrusive adult supervision present. There are more shaded park benches for the adults than at any other place at the zoo. Mothers can get together to discuss their children and to solve other pressing world problems. Grandparents can compare the modern facilities as to how they were “in the old days”. Since there is only one guarded entrance and exit to the Children’s Zoo and Playground, there’s little likelihood of any lost children. 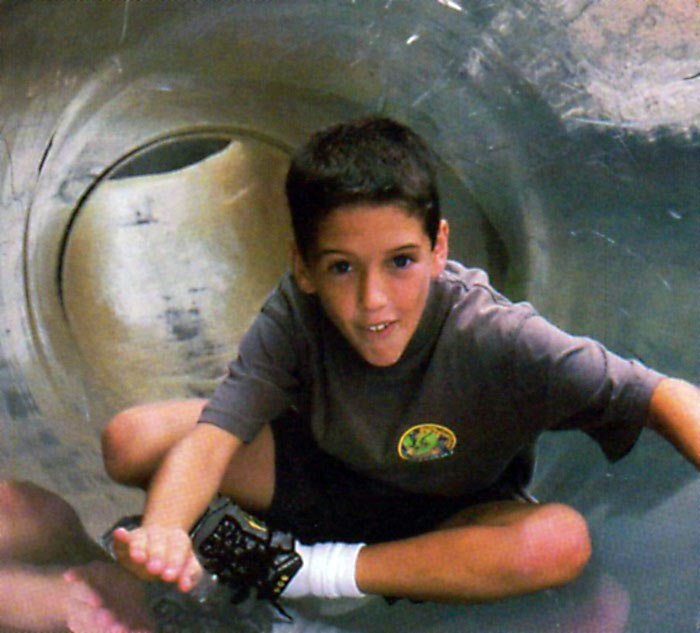 The most popular attraction at the St. Louis Zoo’s zooground is a see-through acrylic tube slide that takes children below a water habitat full of live river otters.

Need to cool off after a hot workout on the ropes? The kids can play in a maze of bubbling water geysers. At times, they spray close to the ground. Sometimes they shoot higher into the air. You never know which one will go off next. The children spend hours playing in it. Some parents even bring bathing suits for their kids.

A brightly painted board with the heights and silhouettes of familiar zoo animals show children how they measure up to those in the animal kingdom. Are they as tall as a Ilama? A grizzly bear? A boa constrictor? A red-tailed hawk? The children can find out by comparing themselves to the silhouettes.

Inside a modern, air-conditioned building, a young son clings tightly to his mother. She is bravely attempting to introduce him to his first live animal there, a squirming black and white guinea pig. Docents are nearby to assist. A father helps his daughter make the acquaintance of a shy box turtle. Nearby another family: mother, father, son, and daughter, interact with a family of rabbits.

There are a number of varied responses to the next visitors-the naked mole rats. Mothers and dads can't stand them, small children, girls included, find them "fascinating and cute." These underground rodents are wrinkled and pink. They look like hot dogs with buckteeth and tails. There are more than 340 animals in the Children's Zoo. 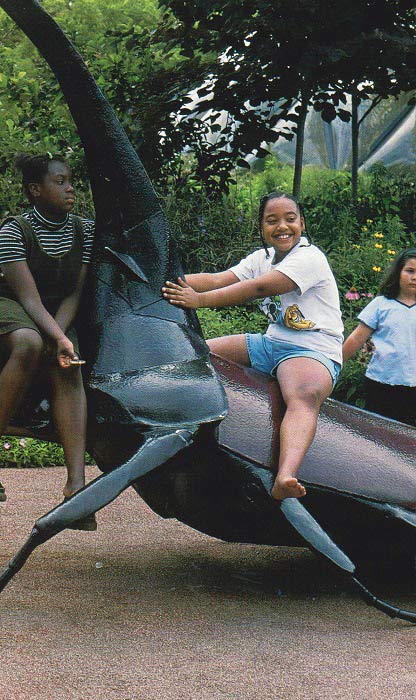 This giant beetle is as close as many kids want to get to insects.

The "Hip Hop Swamp" is a ribbet-ing experience. Children are surrounded by a maze of colorful amphibians when they enter. A new addition to the zoo, the swamp features 1 7 species of frogs, toads, and salamanders.

The highlight of the exhibit is the Frog Surround, a one-of-a-kind walk-through toadstool in the center of the maze. Children can pop up in the interior of the acrylic toadstool for a close-up look at dozens of brightly-colored frogs surrounding them on all sides. Parents can shoot their photographs from above. Near the Frog Surround is an activity water table, where children play with plastic frogs in water. 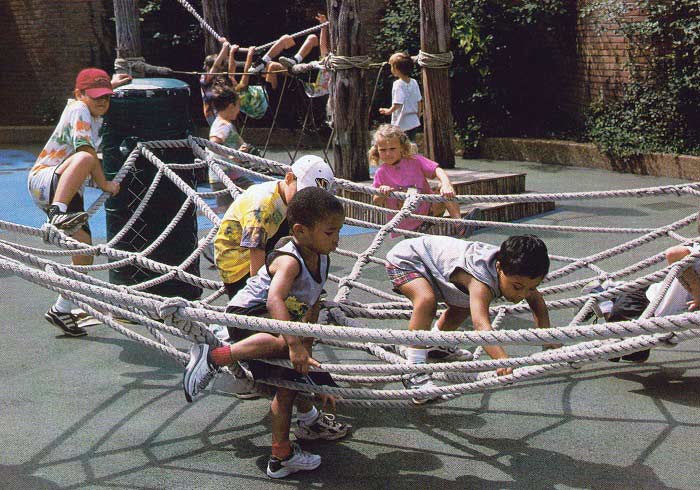 The play elements of the St. Louis Zoo's children’s area have an animal theme, including the giant spider web.

In addition to all these activities, there are live shows at the Bank of America Amphitheater every 30 minutes. Here children and their parents can watch a Harris hawk in free flight or watch the release of homing pigeons. They can also meet Llarue, the Ilama who can carry 130 pounds and travel up to 18 miles per day. Then there are Josie and Sabrina, English Cotswold sheep and Clyde, a screech owl.

And the Children's Zoo and Playground is so engrossing that a survey by zoo officials indicates that the time spent there by parents and children averages 98 minutes, some coming several times a month