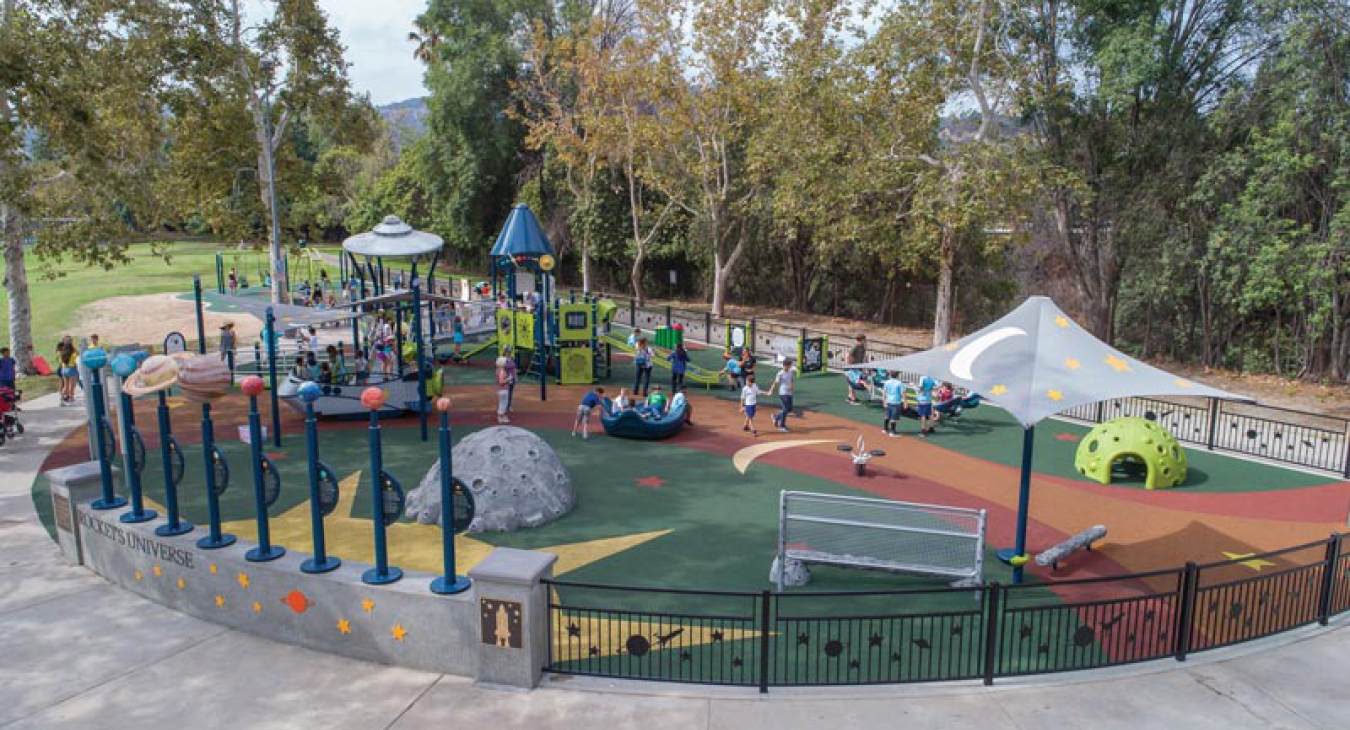 The neighborhood playground is an environment where families create community. But for decades, an entire group was missing from these vital hubs: caregivers and children with disabilities, who make up 19% of the US population.

In 1996, Amy Barzach opened Jonathan’s Dream, the first accessible playground in the United States. This ground-breaking legacy in West Hartford, Connecticut inspired Catherine Curry-Williams, Scott Williams, and Tiffany Harris to form the non-profit Shane’s Inspiration in Los Angeles in 1998, resulting in the first fully-accessible playground in the Western United States.

“Families of children with disabilities were ostracized and not invited to be a part of their communities,” observes Brad Thornton, Senior VP of Project Development with Shane’s Inspiration. “When Shane’s Inspiration opened in 2000, I met these families and saw children having a wonderful time on equal footing. I got to see the parents light up and see their children accepted for who they were. All the differences melted away.”

The Evolution Of Barrier Free Parks

Diane Scanlan, Shane’s Inspiration’s Sr. VP of Design has created more than 50 award-winning playgrounds since joining the organization. “Before 1998, the public had no idea what defined an accessible playground. Shane’s found their own definition of accessibility and the key to engaging a child in the playground. Most of the newly constructed playgrounds that fulfill the minimum ADA guidelines still did not benefit children with disabilities. Hence, the birth of ground level and sensory play, where children with disabilities could be challenged but not threatened while experiencing the benefits of social play.”

Despite the many benefits of inclusive play, Shane’s Inspiration had to persuade communities to establish these play spaces in the beginning.

“Sometimes the public responses were challenging and shocking. This was new. At some community meetings, we were told that they didn’t need an inclusive playground because there were no children with disabilities in the community, which wasn’t true,” remembers Thornton. “Or some believed that they carried contagious diseases. They were afraid of integrating their children.”

But persistence paid off one community at a time.

“Once we opened a playground, those who previously resisted saw children with disabilities come to the playground. It would shift them. They would have an aha moment,” Thornton shared.
“There was an increased understanding of the play needs of children with disabilities. Those who saw that these children were being denied their right to play became activists for a changed world for their children,” Scanlan commented.

This new awareness and activism fueled the demand.

“Inclusivity has come to the forefront of the playground industry. Instead of simply updating playground equipment, communities ask for inclusive playgrounds. Those interested are finding the funds through municipalities and private donors,” commented Scanlan.

“I give parks and recreation departments across the nation a lot of credit. They took a seed of an idea and grew it powerfully. That’s a huge paradigm shift that was not there back in 1996,” stated Thornton.” 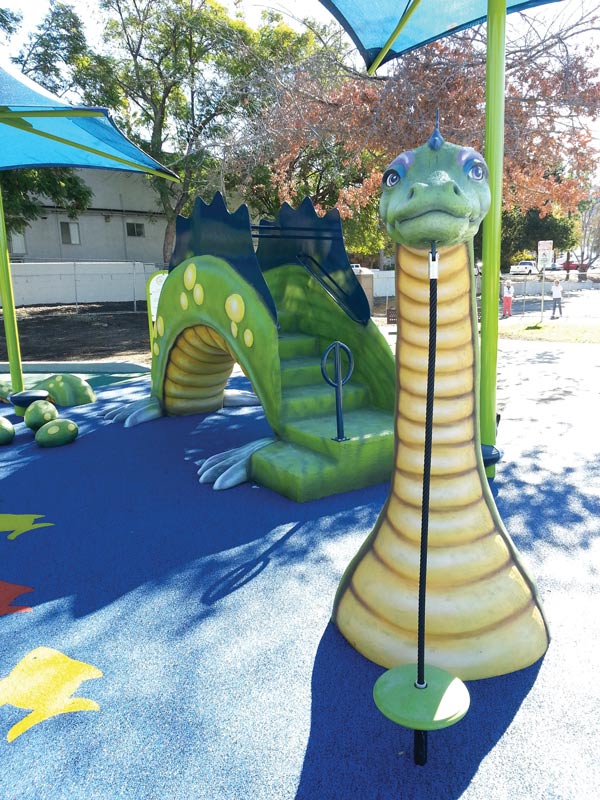 “The mandate for inclusive design has forced designers to be more creative. No longer are we providing the simple function of a swing or slide but designing an environment with multi-sensory experiences that forms a thematic world,” reflects Scanlan.

“The use of the sand table is one example. If we isolate a raised table away from other activities, a child would likely feel alone while their peers played elsewhere.  But if it were located facing a sand pit, children could interact with their peers on the other side, enhancing the social aspects of play. We don’t just place elements on the playground that comply with the guidelines. We massage them, which results in more unique and thoughtful playground,” observed Scanlan.

Who are the key drivers of this evolution in design? Children. By implementing school and family programs at their playgrounds, Shane’s Inspiration staff learn as kids play.

“I learn from watching kids interact with play equipment. I come away with information: why is it working for them, why is it not, how can we make it a more sensory experience?” Scanlan shared. “That’s how a roller slide turned into a roller table: someone let us know that a child with a disability was fearful of being put on their back and going down the slide. If one piece of equipment isn’t working for one set of needs, then we choose to adapt it.”

As more and more students and families with Autism and sensory processing disorders participated in their programs, Shane’s Inspiration’s designs shifted again.

“Back in early 2006, we really started focusing specifically on the play needs of children with sensory processing disorders. That was a lightbulb moment. We created the first sensory walls that engage the whole child,” Thornton recalls.

“Sensory processing is a challenging accomplishment to bring to a playground,” Scanlan admits, “because of noise, lack of space, and the fact that you aren’t dealing with a single child’s sensory needs. With creativity, you can combine multiple play and sensory opportunities into one play element.”

“An example is the sea serpent sculpture we designed at a play space in Los Angeles, which incorporates climbing, crawling, sliding, tactile/visual opportunities and theme all in one element,” Scanlan stated.

Twenty years ago, no one saw a movement. They saw a unique playground that allowed all children to play. Today, Shane’s Inspiration has created 70 inclusive playgrounds and currently has 50 more in development worldwide.

And while the designs and industry have changed over time, one thing has not: children with disabilities still drive the inclusion movement.

And the legacy they will leave?

“The next twenty years are going to be influenced by those children who grew up on inclusive playgrounds and experienced Shane’s Inspiration’s inclusion programs. They will be guiding those who follow. There’s no box limiting them on what is possible,” shares Thornton.

“When you think about a future playground, there will likely be more sensory, interactive play through technology that won’t be possible without today’s generation capturing the opportunities, creating a better understanding of what all children experience and feel.” 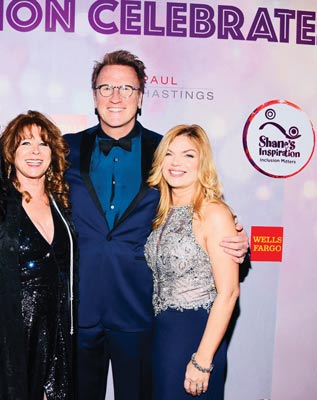 Shane’s Inspiration, the world's leader in creating inclusive playgrounds and educational programs for children with disabilities celebrate their 20th Anniversary in 2018. Shane’s Inspiration has reinvented the paradigm of play with education and community outreach programs that socially, physically and emotionally integrate children of all abilities to foster acceptance, friendship, and understanding for children with disabilities. shanesinspiration.org