The Impact of ADA on Playground Design 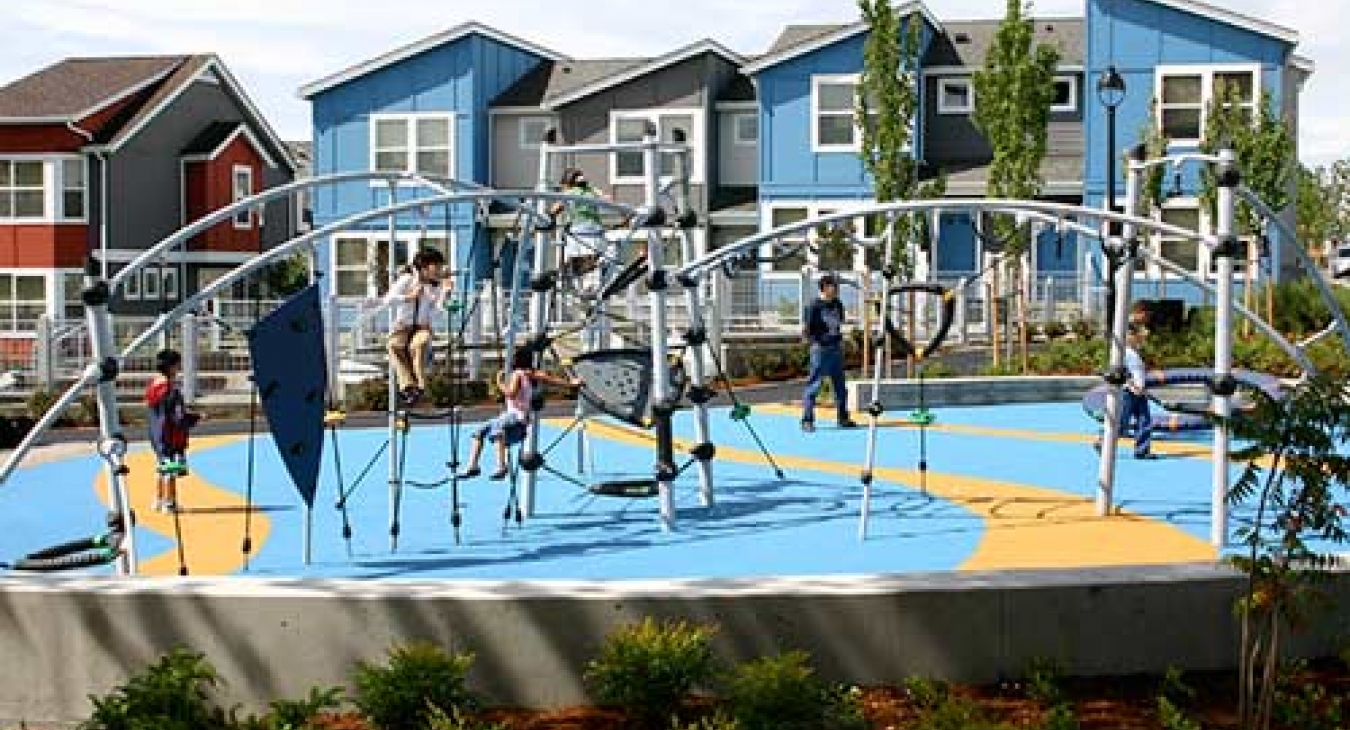 Let’s be clear. Every person has the right to play and there is no “condition” that negates this right. The more a society ensures this right for all, the healthier it, and its people, are.

The citizens of the United States are to be congratulated for taking the lead to enhance access to play areas. With promulgation of the Americans with Disabilities Act (ADA) Standards, playgrounds across the country have been transformed. Typical of most visionary movements, the results have been a mixed blessing.

As with all governmental regulations, the standard is an exercise in compromise and is basically designed to provide the most access at the least cost. Here are some examples.

Firm and stable paths of travel for wheelchairs are ideal, but when inside the fall zone of play equipment, they have to be resilient; they are expensive and a less expensive alternative, engineered wood fiber (EWF) is allowed to meet this need. Having tried to use a wheelchair on EWF myself I can attest that such surfaces are very difficult to negotiate and one can certainly not “play” on EWF in a wheelchair.

Transfer stations, which many players find very difficult to use, are deemed sufficient to provide access to elevated play activities on small structures. Large structures are required to have ramps that double the cost of a play structure, are visually unappealing, and have no play value. The result of this “two size” approach is that the vast majority of playgrounds are just small enough to qualify as accessible with a transfer station and EWF surfacing.

Most communities provide at least one “play for all” large playground. In the early days of the standards these structures where fitted with long ramps and were not well received. Nowadays the more typical design is to use earth forms and bridges to provide elevated access, a far more attractive and functional solution. 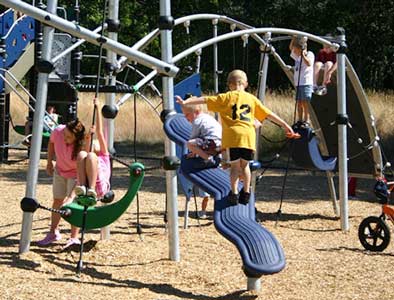 A few years ago another way of providing access emerged, the “deckless” playground. Since slides are the only play event that actually requires an elevated path of travel, these systems typically don’t have a real “slide” in the common sense but rather some sort of slide-able device. The great thing about the deckless concept is that all of the activity is accessible from the ground. When a rubber fall surface is used, these playspaces can provide fully integrated play without the stigma of “accessible” adaptations.

Shift the Focus to Inclusion

Over the past decade we have learned that access alone is not the answer, since these expensive “accessible” spaces do not attract the number of users expected for the investment. What we have found is that it is necessary to create fairly elaborate and unique environments in order to attract the whole community. That is to say that just adding ramps to a playground consisting of standard play apparatus doesn’t generate the critical mass of players so that there are enough kids and stuff to do that everyone is playing together.

If we were to take an inventory of playspaces nationwide, what we would see is that there are a few extraordinary playspaces that really do allow all children regardless of abilities to be playing together. But we also see that the vast majority of playgrounds, while they meet the letter of the law, they do not meet the inclusion needs of children where they spend most of their time, at their small local park.

For too long the parks and recreation community has felt that simply adding some play apparatus into a field of mowed lawn will meet the needs of the community. Those days are over. There are stories in the media nearly every week complaining about boring playgrounds, playgrounds that aren’t interesting enough to compete with video games. Playgrounds are losing their customers and we need to do more.

The trend that is emerging these days is that large playspaces are relying less and less on a single equipment provider or even commercial apparatus at all. They also tend to be “destination” parks, large complex playgrounds that merit a long drive to them.

A wonderful example of this is Magical Bridge Playground in Palo Alto, California. I recently visited the site and had a chance to talk with the creator, Olenka Villarreal. Since I’ve been deeply involved with both the development of accessible playgrounds and the application of the ADA guidelines, I know how incredibly difficult an inclusive playground is to execute and wanted to see how a person with no prior background in playground design/build could pull off such an exemplary project.

What initially drew me to Magical Bridge were the images of the extraordinary playhouse that is at once playful and refined. Created by Barbara Butler, it is a tour de force and reflects her vast experience building residential playhouses where parents and kids get to ask for what they really want. The stage element is a feature that I think all playgrounds should have, but never do. The interior details include a bakery and workshop. Best of all, the two-story design makes the ramps logical and well integrated rather than an obvious stuck on ADA requirement. 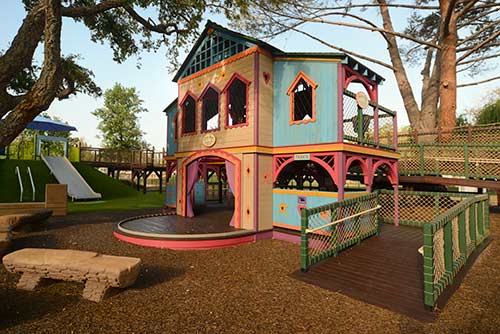 I was also impressed by the lack of commercial equipment. As I have written previously, I’m a huge fan of site-built playgrounds, especially those that include artists as major contributors. This is a great illustration of the power of that approach. As with most site-built projects, commercial elements are mainly limited to the actual play apparatus, and all of the support and context is locally crafted providing the best of both worlds – ASTM compliant and maintainable play events in a unique and beautiful presentation.

Walking the site I was impressed that the poured-in-place surfacing worked well. Generally, I’m not a supporter of wall to wall rubber, but this site design mixes colors and textures, is broken up with wood decking and concrete pathways, and the crowning touch is using a multi-color mix under the trees that mimics wood fiber for a very naturalistic effect.

As with most playgrounds these days with their excessive fall zone requirements, the various small features such as rockers were set far apart. Normally, this just looks stupid, but here the sense is of spaciousness and generosity.

A confession. I didn’t do a great interview. As an “industry insider,” Olenka’s story about her experience trying to achieve her vision was so fascinating to me that most of the time I had with her was mainly taken up with sharing our mutual passion for all things play-related. I learned, for example, that none of the major domestic vendors were at all responsive to the very clear design requirements that were set forth in the RFP. Except for the slides, the rest of the equipment is either custom made or imported from Europe.

My visit was mid-day during the week and there were at least 50 kids and parents actively using the space. Olenka had gone to great lengths to preserve the existing trees and went to the considerable expense to import mature trees that together create a sense of space that is impossible with canopies. The mature oaks are adjacent to the playhouse, which has stone seats arranged in amphitheater style in front of the stage with game tables behind them, which creates a natural gathering place that was brimming with activity.

As I have followed the development of these inclusive parks, there is another feature to them that is rarely noticed. The better examples generally include some form of programming. Generally, such programming involves busing in children from programs with special needs. In other cases a community of families is formed and events are planned for this group. While these programs are unquestionably valuable, they tend not to be inclusive. Indeed, they can reinforce the perception that the playspace is primarily for this population.

Magical Bridge goes about this in a very different, and to my mind, a much more effective way. Their programming is for the whole community. The concept is Kindness Ambassadors, who are there to play with the community and to spread kindness.

Lest you think this is just a “feel good” and passing gesture, there is a Kindness Wall that clearly spells out what kindness is and what kind people do. On opening day hundreds of Kindness Wands where hung spreading kindness everywhere. 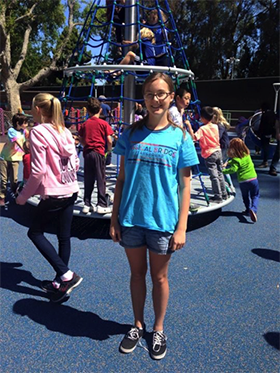 Olenka now faces the dilemma of how to ensure that the project she has invested eight years of her life into continues to thrive now that it has been turned over to the City of Palo Alto. In the coming months she will be working with the city hall to get permanent staffing to provide Kindness Ambassadors on an on-going basis.

As Olenka described her relationship … “they are very supportive and interested in helping with programs, entertainment on the stage and more. The Mayor, Director of Community Services, and other City staff are all on our Stakeholders Committee. Our project has often been held as an example of the most magical (really!) of private-public relationships.”

All too often donors are great at funding construction, but rarely, if ever, willing to fund staffing. The key is to ensure that the programs that are presented at the playground are seen as serving the whole community, not a small sector. When everyone benefits, this becomes a natural part of the recreation programming and everyone wins. Magical Bridge is a shining demonstration of what can happen when the public and private sector work together.

Here are other examples that go beyond the ADA to become inclusive community destinations:

It’s time we stepped up to the plate.

While a fully inclusive destination playground is a wonderful thing, it is not the whole, or perhaps even the best, solution to a fully inclusive community. Since it will not be possible to make small playspaces better at accommodation, neighborhood parks can at least do a better job at being inclusive and not just accessible.

Yes, there are budget issues, but activists alone cannot be the sole source for providing for critical community recreational needs. Recreation professionals are the ONLY people fully qualified to competently develop solutions to comprehensive inclusive recreation. No one else, not landscape architects, not equipment suppliers, not well intentioned NGOs, no one else knows the intricacies of government, maintenance, and local politics as well as local park professionals.

And there are solutions

The good news is that there are workable, affordable, sustainable solutions to significantly increasing inclusion throughout park systems. Let’s look at some examples:

The intent of the ADA was to provide for inclusion by ensuring access. The goal was, and is, that everyone should be able to play together. Just following architectural mandates might work for buildings, but it is not enough when we are trying to create playspaces. The fact is that if all of the activities on your playground are active play, two things are true: 1) there will always be some children who will not be able to use the space, and 2) it’s not a great playground for any children because play is not just active, it is also pretend and constructive play.

All these suggestions should be part of new playgrounds and can be additions to existing facilities that will greatly increase the use of the playspaces by the entire community. These ideas can all be designed to be extremely accessible. But the really big pay off is that they bring a critical mass of players together so we get real inclusionary play.

If community advocates can generate millions of dollars and enlist thousands of volunteers, you, the highly qualified recreation professional, can certainly reach out to the community to find a few thousand dollars and a few dozen volunteers to implement any of these ideas, and in so doing bring inclusionary play right where it’s needed most, the small local playspace.