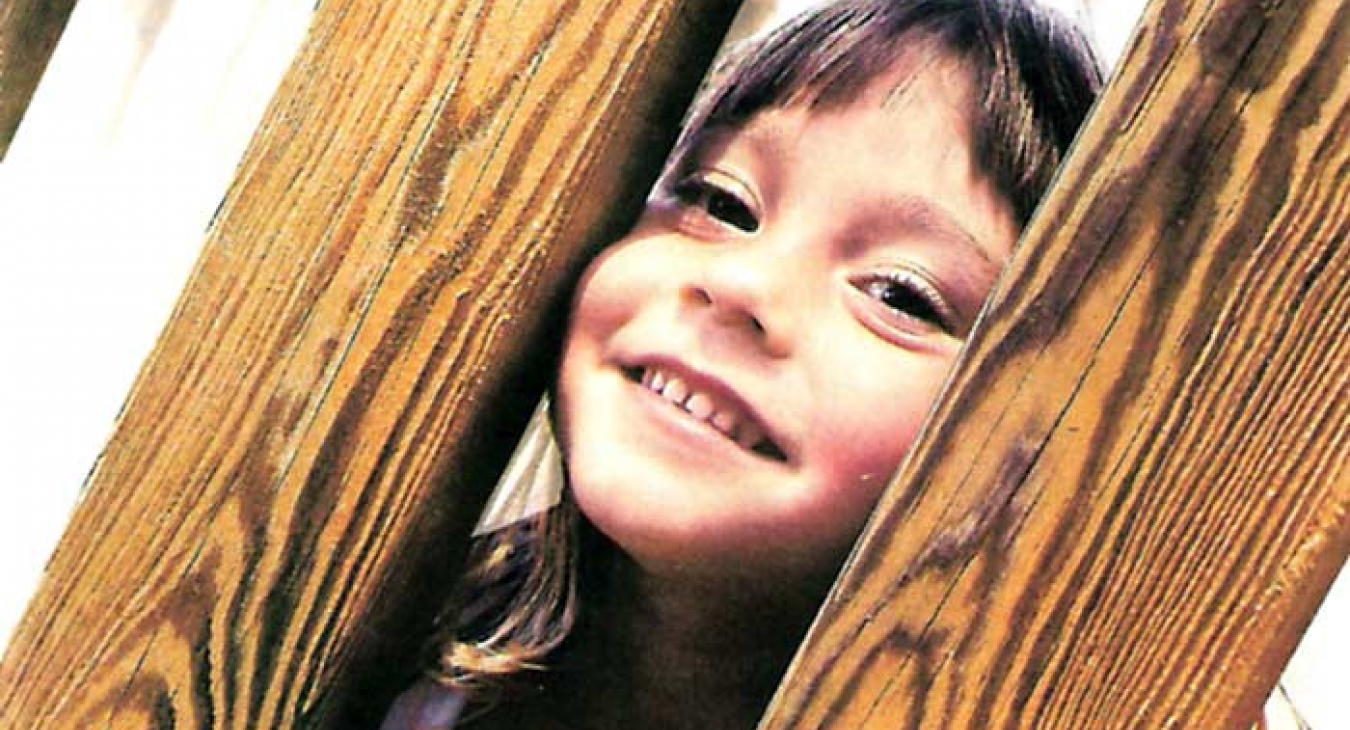 One Florida official summed it up best when he said, they knew they had a problem, they just didn't know how big or serious it was. He was not, of course, referring to the Sunshine State's voting conundrum. He was talking about the discovery of high levels of arsenic in the soils beneath some of the state's thousands of public and private playgrounds. The official also added that they were not precisely certain how best to fix the problem or where the funding to do so would come from.

Few tend to agree how big a problem it is. The American Wood Preservers Institute (AWPI) quote one set of guidelines, the environmentalists another. Florida's own Department of Environmental Protection actually has two different sets of standards which it goes by. One distinguished professor at Florida State University takes a position different from that of a colleague at the University of Florida. Given the intense interschool rivalry over the years, that should come as no surprise. But wherein lies the truth?

Ninety-nine percent of all the pressure treated lumber sold in the United States contains the preservative Chromated Copper Arsenate (CCA). The wood used extensively in playground structure construction lasts five times longer than untreated wood due to its ability to resist insects and humidity. Rainfall and moisture tend to leach CCA out of the wood and into the soil underneath playground structures. 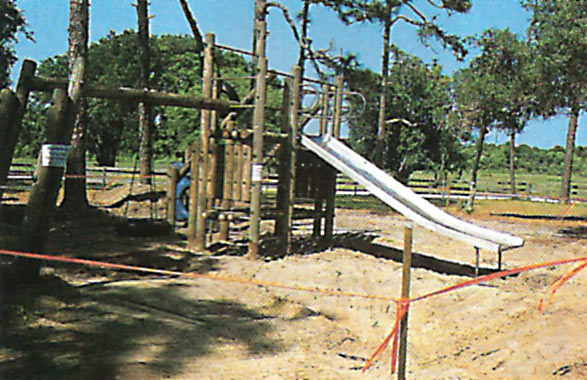 Holder Park, in Mims, Fla., had to shut down its playground while workers removed soil surrounding the structure. The soil was found to have traces of arsenic from the treatment used on the wood.

So, is it politically correct to use CCA treated lumber in the construction of today's playgrounds? Apparently not. A firestorm of public opinion ignited possibly by a March 2001 article in the St. Petersburg (Fla.) Times has raced across the state of Florida during the first quarter of the year with the speed of a Wyoming Wildfire.

From its evident beginning on the state's west coast, it has swept across to the east coast in less than 30 days. Playgrounds have been closed either permanently or until serious remedial actions are taken in the firestorm's wake. Since then Charlotte County, Orange County, Volusia County, Brevard County and others have ordered soil testing on hundreds of playgrounds.

This incident, however, was far from the first. Over a year ago there was arsenic contamination scares in Cleveland, Ohio, St. Louis, Mo. and Gainesville, Fla. All of these and others around the country like them died down and, after careful analysis, the playgrounds in question reopened and are still in operation. To this date, there has not been one child's death attributed to playground arsenic contamination.

The wave of playground closings or modifications was triggered by the desire to protect our children from the risk of cancer. An admirable goal. We are, however, trying to do this by removing all the playground structures and the safety surfaces, which have traces of CCA. Recognized experts in the field estimate that a child would have to actually eat at least a teaspoonful of arsenic-contaminated soil a day for thirty years for that to be a valid assumption.

Make no mistake: arsenic is a deadly dangerous chemical when misused. So are many naturally occurring compounds. In short, arsenic can kill. We should take all possible precautions with it to protect our children and ourselves. But we shouldn't lose our heads in the process. The sky is not falling. Remedial actions should be taken without delay. But this must be tempered with a healthy dose of reality.

CCA pressure treated wood is the green-tinged lumber treated with a pressurized solution containing copper, chromates, and arsenic, which is where the term CCA lumber comes from. It is sold in almost every home center and lumberyard in America. It is highly resistant to rot and insects. 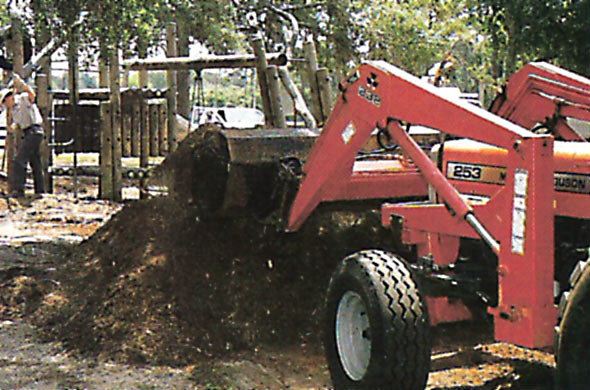 Soil removal is a tedious job that can close a playground for some time.

Recently, Dr. Christopher Teaf, director of the toxicology program at Florida State University, said, "It would take far more arsenic in soil than what I have seen in scientific reports or the press, before any." threat of health effects to children might occur . .. as a husband and a father of two young sons, with a playset in the backyard, I plan no changes. The product has been used safely for generations, and I have seen no reason why it shouldn' t continue to be properly used in the future." In December 2000 Dr. Teaf completed three studies on health considerations of (CA-treated wood.) 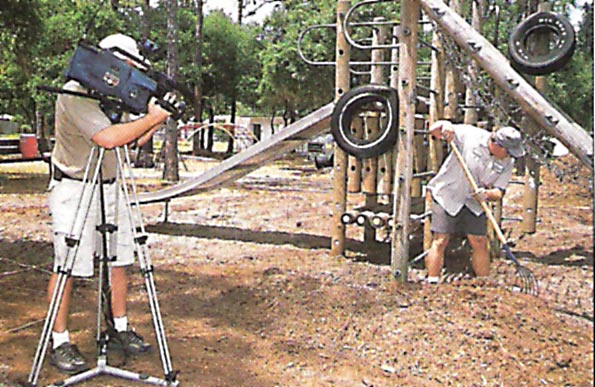 Local media attention placed the closures of some Florida playgrounds in the public light.

In 1997, the U.S. Environmental Protection Agency said: "EPA reviewed the use of CCA in pressure treated wood extensively during the 1980s and concluded that pressure treated wood did not pose unreasonable risks to children or adults, either from direct contact with the wood .. . or from contact with surrounding soil where some releases may have occurred. Based on scientific data that EPA has reviewed to date, the Agency has not identified any significant health concerns from short or long-term exposure to arsenic residues from pressures treated wood.”

After the Consumer Product Safety Commission (CPSC) studied playsets made of (CA -treated wood, that agency's investigator said: "The amounts (of dislodgeable arsenic) were much below the level that makes a difference to health. I have no problem with telling consumers it is appropriate for playground use." 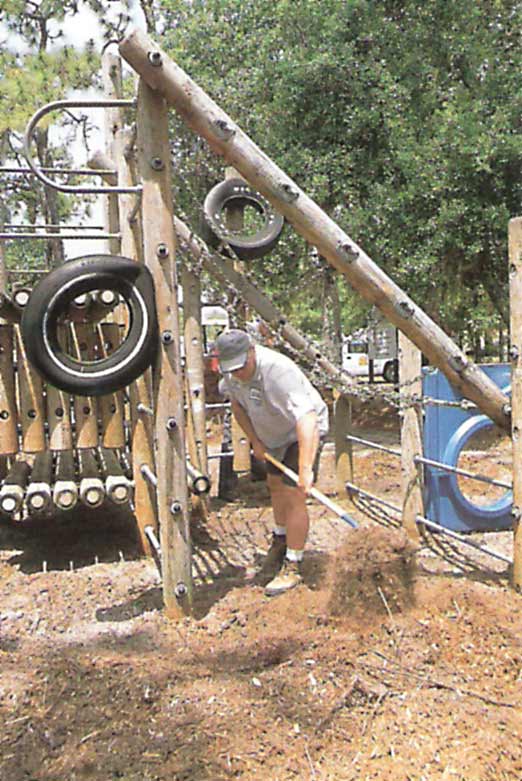 Much of the soil removal at Holder Park had to be done by hand.

Consumer Reports magazine in 1996 reaffirmed the CPSC's findings about (CA-treated playsets and added: " If you'd rather not take any risk at all, you can always paint the wood, but we think that's a needless expense."

Mel Pine, manager of communications, American Wood Preservers Institute, of Vienna, Va., presented these findings to us. The United States Environmental Protection Agency (EPA) banned most arsenic pesticides years ago but made an exception for pressure-treated wood. Switzerland, Vietnam, and Indonesia have banned (CA-treated wood. Japan, Denmark, Sweden, Germany, Australia and New Zealand have restricted or proposed restrictions for it.

A small dose of arsenic can be fatal, and long-term exposure can cause cancer. But it is not clear whether contact with arsenic leaking out of posts and boards is dangerous. Does that mean that every timber playset is dangerous and should be replaced immediately? Not at all. In fact, far from it, many of the timber play structures showed absolutely no CCA contamination when tested.

One economical way of reducing arsenic from leaching out of older wooden play equipment is simply to paint the structure each year with a good sealant. This is not to say that older equipment should not be updated. But for the financially strapped local governments and private playgrounds, it is an option.

A case in point is the extensive timber play structure at the privately owned Brevard Zoo in Melbourne, Fla. 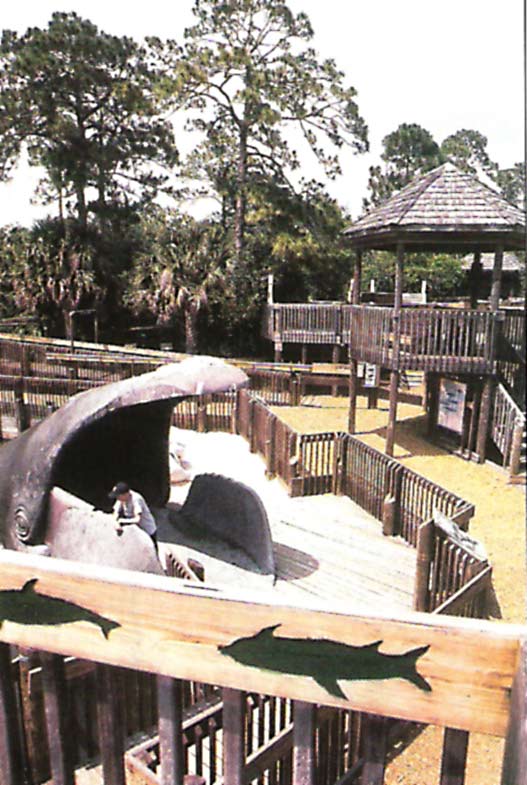 Brevard Zoo's playground is treated consistently with a sealant and has had no problems with arsenic in the surrounding soil.

"As a result of the recent press coverage of playgrounds which showed CCA levels between 5-10 parts per million, on May 2, Brevard Zoo's playground area was tested for CCA," said Gayla Schaefer, public relations and marketing director for the Brevard Zoo. " Six surficial and near-surface soil samples were gathered. Only two of the samples showed traces of CCA, and both samples were taken from one foot below the surface. Samples taken at 6 inches below the surface showed no traces. The highest level found in the playground (at 1 - 1 1 /2 feet) was significantly lower than the highest levels labeled as acceptable by the Florida Department of Health before the levels become dangerous for children. 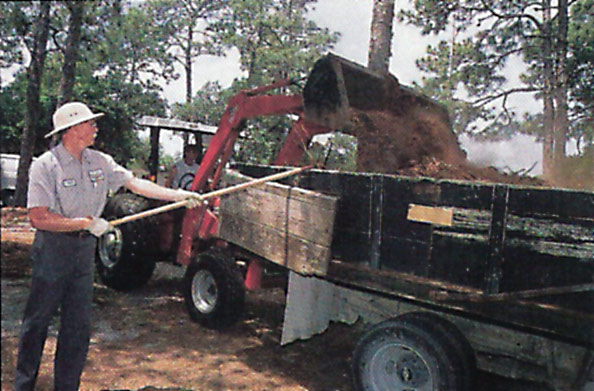 "Brevard Zoo's playground, a large wooden structure, meets many of the criteria that lessen the risks of Chromated Copper Arsenate (CCA). The wood has all been sealed within the last year. There is a mulch layer above the soil, which is also covered by a cloth, making it unlikely that a child could come in direct contact with soil in the playground.

"While the Brevard Zoo feels that the test results on the playground area, in conjunction with our risk factor reducing agents, have proven our playground safe, we will be watching the issue closely. Plans were already underway to revamp much of the playground. All new areas of the playground and replacement parts will be held to the absolute highest standards. Children's education and safety are the primary goals at Brevard Zoo ."

In Brevard County, one of the state's larger counties, examination of all the public playgrounds showed that only one of twenty had a problem. The remedy was for a crew to come in and remove the mulch and one foot of sand under the play equipment. This was disposed of at the county landfill and replaced with clean, uncontaminated sand. The entire facility is scheduled for upgrading and overhaul shortly. No other county playgrounds were affected.

Piggybacking was one problem that we encountered when researching this article. That is the practice of replacing older playgrounds or wooden playground structures with new, more modern designs under the guise of "protecting the children ." It is an almost failsafe tactic for obtaining necessary funding in tight economic times. Unfortunately, there are also a few peddlers in the industry who are willing to exploit this in order to sell more playground equipment. Former Seaside Heights, N.J. councilman and safety commissioner Guy Mazzanti said that this has been a common political ploy in the past when funding for a project was tight. 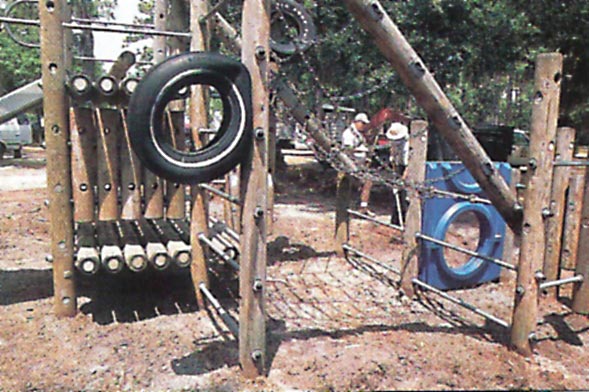 The bottom line when it comes to playground safety is that, if you must err, then err on the side of safety. In the case of CCA, it appears to be one of concerned caution. Have your playground checked by an independent testing laboratory and heed their advice. So much the better if the testing shows that there is no problem.

When the time comes to replace your play equipment, do it in consultation with professionals in the field. It may be time to look at new building materials. In the meantime, a coat of good wood sealant will go a long way toward playground safety.

4 Benefits of Remodeling a School's Playground

How Much Cost To Build a New Playground In 2020