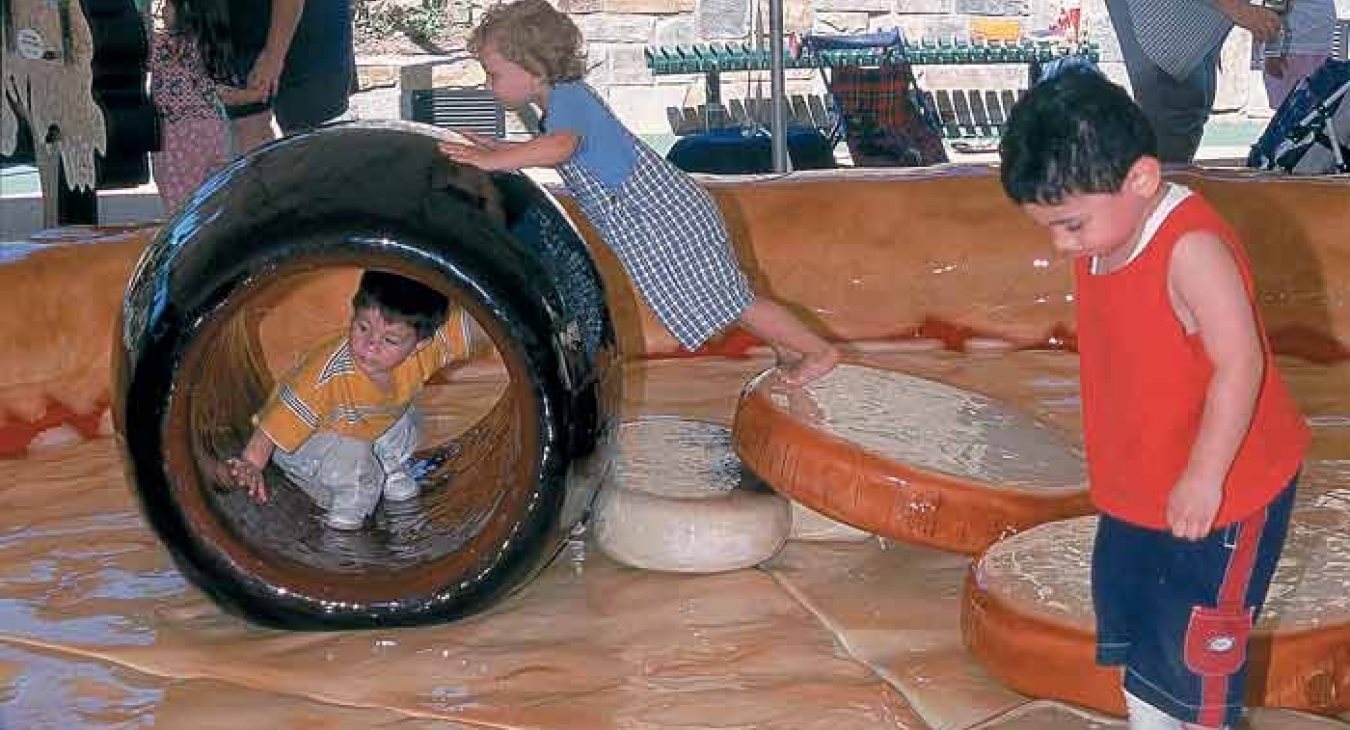 Koala’s food for thought at the zoo

A huge rubberized vegetarian pizza makes an exciting new children’s playground at the National Zoological Park in the nation’s capital. It’s far too large for the typical home delivery truck, but the 22-foot diameter structure comes complete with a foam filled crust, an oversized tomato, a large wedge of cheese, a hefty hollow black olive, garlic and red onion and mushroom slices. A nearby mini-garden—complete with real things growing—graphically illustrates where the pizza ingredients actually come from.

The emphasis is on providing 3- to 8-year-old children with educational “hands-on” knowledge as well as an entertaining experience. The young urban inner-city youth, for example, quickly learn that not all milk comes from a bottle or onions and tomatoes from the neighborhood supermarket.

To back up the KoalaPlay Group playground, the recently opened $5 million Kids Farm is designed to introduce young children to a few live farm animals in a natural barnyard setting. The overall exhibit covers a total of two acres and includes a spotless modern bright red barn and an accessible barnyard where young visitors have the opportunity for up close and in person encounters with cows, goats and miniature donkeys. The animals are among the newest members of the zoo’s 2,470 animals. 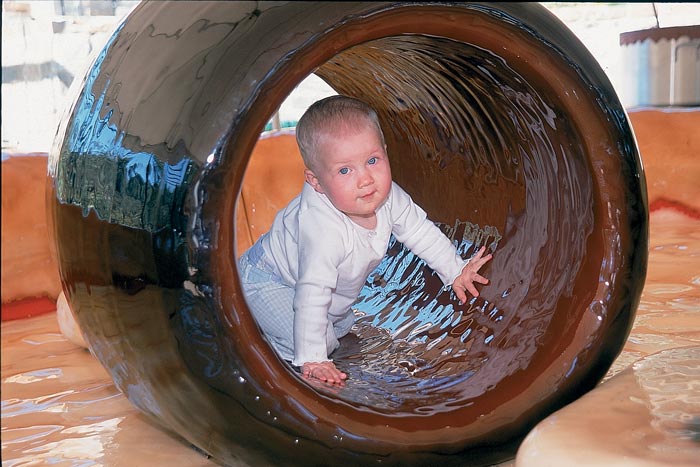 The Kids Farm, built on a section of unused zoo property, was funded by a congressional appropriation earmarked specifically for that purpose. Republican Ralph Regula (R-Ohio), himself a farmer, lawyer, and former educator, spearheaded the congressional support. Lucy Spelman, the director of the National Zoo, commented that the exhibit offers children and adults a chance to learn what it takes to care for these domestic animals, which are often taken for granted. “Many children, especially those living in an urban area, have never seen many farm animals, much less a zebra or giraffe,” she added.

The idea for the new Kids Farm and Pizza Playground originated in a brainstorming session of zoo officials and was brought about because of a perceived need to provide the younger kids and their parents with a closer hands-on experience than they could get with the association with most zoo resident animals. In short, it was a collaborative effort, a conglomeration of collective ideas.

It is the Pizza Playground; however, that often takes center stage with the youngsters. The playground came about under the direction of Susan Ades, the head of exhibits planning and design.

“The idea was to give the children a sense of where their food really comes from, not just from the local grocery store,” says Ades. “What food has all of the food groups that we wanted to talk about? And what is one of a kid’s favorite foods? A pizza, the answer to both questions! And what better way than a Pizza Playground to get our message across? All kids love to play with their food!”

Ades realized that with one very popular food they could talk about  the food groups: the grains (wheat), the dairy products (milk and cheese), fruits (tomatoes), vegetables (onions, mushrooms, garlic), and they could plant and grow most of these in their small garden that the children could actually see and touch. Another consideration was that little kids need to release pent-up energy. What better way than to provide them with something to lift, twist, turn, climb on and develop motor skills and coordination? 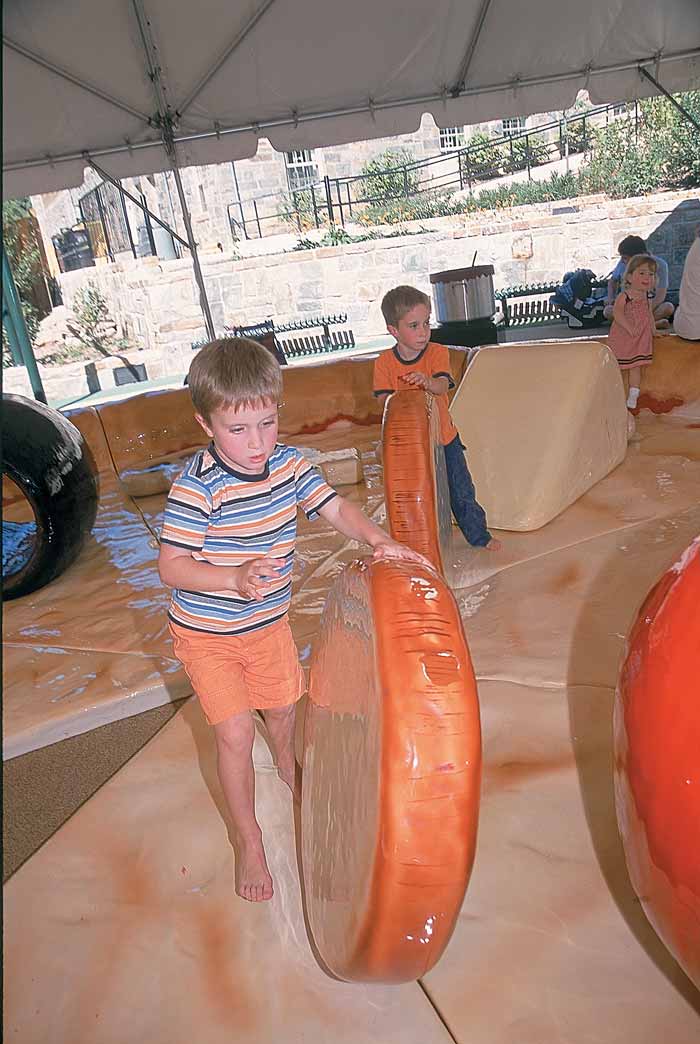 “While the pizza is strictly for play, the peripheral interactive displays, the garden, and the barnyard with its live farm animals would impart a learning experience,” says Ades. “It would give them a tactile sensation while communicating the desired message.”

Once that was decided, the next step was to select contractors and subcontractors who could grade the site (a former wetlands area), build the structure and fabricate the necessary playground apparatus.

The overall contract for the exhibit was awarded to Hadley Exhibits from Buffalo, N.Y. A subcontractor for the giant pizza was the Koala Corporation’s Superior Foam Division. They specialize in producing large-scale food objects and did the fabrication of the Pizza Playground at the National Zoo. The material they used for this is called Playfoam.

The impact surface area under the playground and of its immediate surrounding area was of immense concern. The safety of the children was paramount. Altogether a total of about 6100 square feet of No-Fault Safety Surface was put down at the National Zoo’s new children’s Pizza Playground.

The cost for this averaged out, according to a company spokesperson, to six or seven dollars a square foot. This is a poured in place playground surface comprised of both virgin and recycled rubberized material. This is a two-stage process in the critical fall height impact area. An inch and three-quarters thick recycled rubber material is installed first and followed by a 3/8-inch thick layer of EPDM, the virgin rubber material for the wearing surface. The supplier, who also used their own forces to do the installation, is No Fault Industries, Inc. of Baton Rouge, La.

Interactive attractions are an integral part surrounding the Pizza Playground. These exhibits all illustrate one portion of the whole pizza. Everything from explaining how the grain is grown, harvested and milled into flour and made into dough is covered. How the various vegetables are grown and prepared is demonstrated as is where milk comes from and how it is used in making the dough and transformed into cheese are shown at individual exhibit stations.

The youngsters can, if they wish, stack the onion and mushroom slices on top of each other and use them to climb onto the top of the tomato. The wedge of cheese is readily transformed into a short slide and the giant black olive is hollow and can be climbed through.

Children can pull mock onions from a false ground plot or stir a replica pot of tomato sauce or pretend to milk a cow mockup. Or they can see the real things in the barnyard or growing in the veggie patch. One of the features that most attract the kids’ attention is the pictogram at each stall in the barn. As they lift a wood panel they activate a sound recording the animal makes. It is so realistic that Tulip, the Holstein cow, her counterpart, Rose, a Polled Hereford and the goats actually come over to the fence to see who’s in their territory.

All things considered, the new Kids Farm exhibit and its giant Pizza Playground have been a resounding success. Hardly a day goes by that the attraction doesn’t achieve its minimum use design capacity. More often than not, the playground receives its maximum design use, even throughout the days when school is in session. That’s when the preschooler age group, their parents, and the other caregivers take over. They often interact in the Pizza Playground one-on-one with the young children.

For more information on the KoalaPlay Group, the manufacturers of the Pizza Playground, call 303-539-8356 or visit www.koalaplaygroup.com. For information on No Fault Industries, Inc. call 800-232-7766.