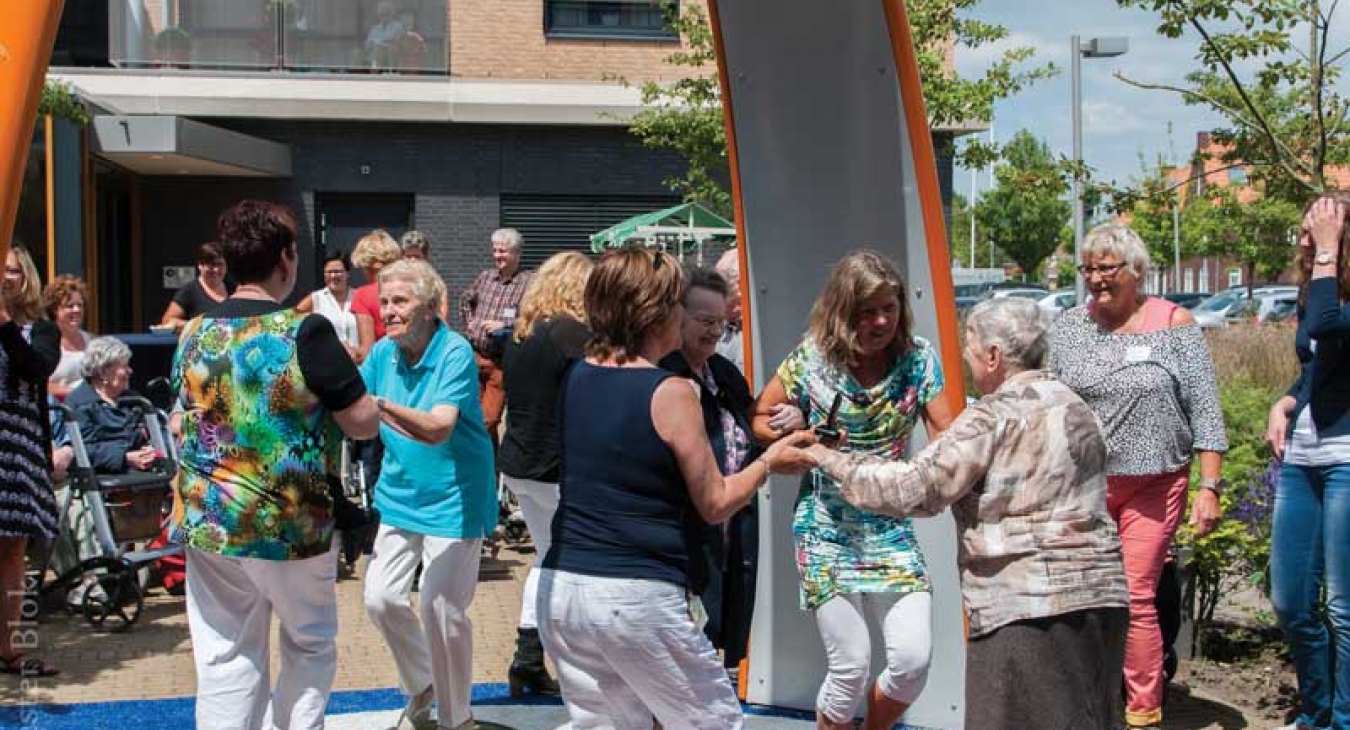 Multigenerational play seems to be another ‘buzz’ word. How can playgrounds actually activate all?

A multigenerational park usually means a large child-focused structure with some outdoor fitness equipment near it which already is a huge leap from the traditional 0 to 12-year-old parks, but how cool would it be if you could really be active alongside the kids you’re with? If you take your child to the playground, what do you do? Parents usually spend time on their phones and grandparents are not going to climb into a high rope structure because they might be afraid to break a hip. As for our teens and tweens, they are definitely way too cool for the slide.

Fortunately, not every playground needs a slide. The time in which we were only able to use traditional equipment on a playground is a thing of the past. Interactive play combines modern technology with being physically active outdoors. Technology allows for a broad spectrum of new and exciting possibilities.

For toddlers and preschoolers, movement detection and audio samples can offer a completely new world of imaginative play. During the pretend game ‘Moon Monster’ under the Dance Arch Sona children go on an adventure. The dance arch Sona will create a monster fantasy in which kids pretend there’s a Moon Monster. The Sona will play scary sounds and will give the kids instructions like ‘sneak around and flee the floor when the monster attacks’. It will ask the kids to ‘slow down’, ‘walk with caution’, ‘lie on the ground’ or ‘crawl on your knees’. Children fully immerse themselves in this monster fantasy and pretend it’s a different monster each round of play. Or they have a blast when the Arch asks them to ‘dance like an elephant’. Kindergartners find more challenge in games such as Rhyme (‘jump on the number that rhymes with live’) or a modern version of Musical Chairs.

And even though ‘dancing like a chicken’ is a little outside your comfort zone, a little dance battle or a game in which you and your child learn binary or roman counting might be something you would enjoy engaging in. Playing soccer with a couple of neighbors or other parents on a smaller multipurpose square athletic court with four interactive goals might attract more than a regular field. Imagine defending your red goal and hearing ‘switch’ after two minutes into the game and realizing the targets have switched forcing you to move to the other side of the field. Not only is it addictive to play, but just as importantly it is also very enjoyable to watch. And what is a good sports arena without a crowd?

That entertainment value can also be used to create out-of-the-box solutions that attract teens because creating an appealing meeting place for teenagers and young adults can be quite an ordeal. There simply isn’t that much to choose from. Not everybody wants to be on a skate ramp, play table tennis or be the next ninja warrior. And there can only be so many basketball courts.

On the interactive DJ booth, creative teenagers can become a real outdoor DJ. When placing your cell phone on one of the two hotspots, the music gets amplified instantly. It allows you to perform DJ effects with some of the pre-installed beats or your own music, like for example filter, scratch, and delay. You can mix two songs together, record loops, cut them and there’s a crossfader; it truly gives you the feeling of being a real DJ outside.

Some technology can even be used to transform your park to a destination and engage users even when they have left the park. After setting a score on the interactive ball wall Sutu, users can choose to claim their score in the free Sutu App to enter the worldwide competition, set up their own competitions, earn all kinds of badges, invite their friends and share their scores on social media. And that is not all. If you allow it, the app will even send you push messages. So imagine sitting on your couch while watching TV and suddenly receiving a message. ‘Your best friend has just beaten your high score’. Doesn’t it make you want to go back to the park again?

Modern technology allows for new games or audio samples to be updated to existing locations to go along with important yearly events or societal themes. Recently we customized one of the Sona games to fit with a school’s music week. Our Memo activity set includes a broad variety of STE(A)M games and quizzes. We educate users on cultural integration, healthy nutrition or make custom content so for example, a science center can integrate questions that correspond to their exhibit subjects.

Interactive play has even been adapted to activate the more mature adults. In several senior living locations in Europe, the Dance Arch Sona is used by seniors for brain training with memory games, daily exercise or even to play air conducting games.

Interactive play is much more than simple electronic play and being able to generate a sound or light. Modern technology can make a playground experience epic and memorable for both the young and the less young.