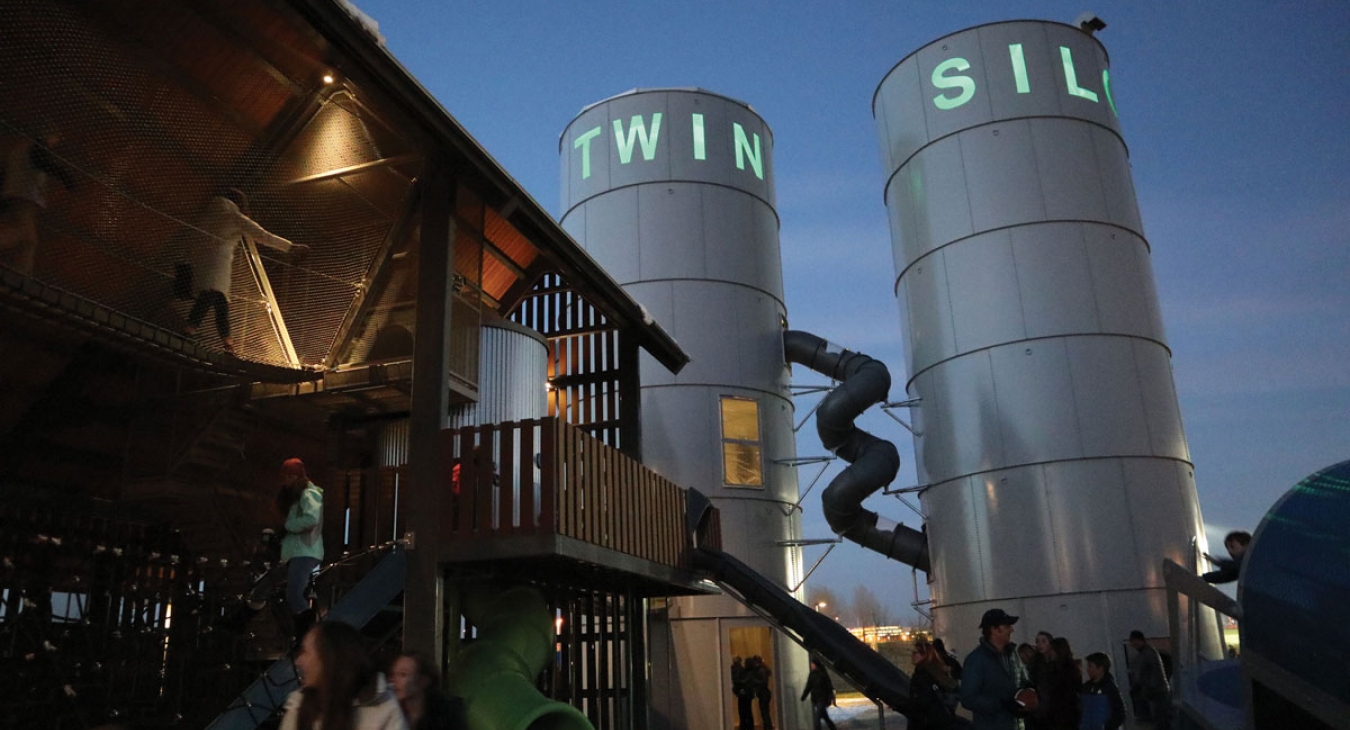 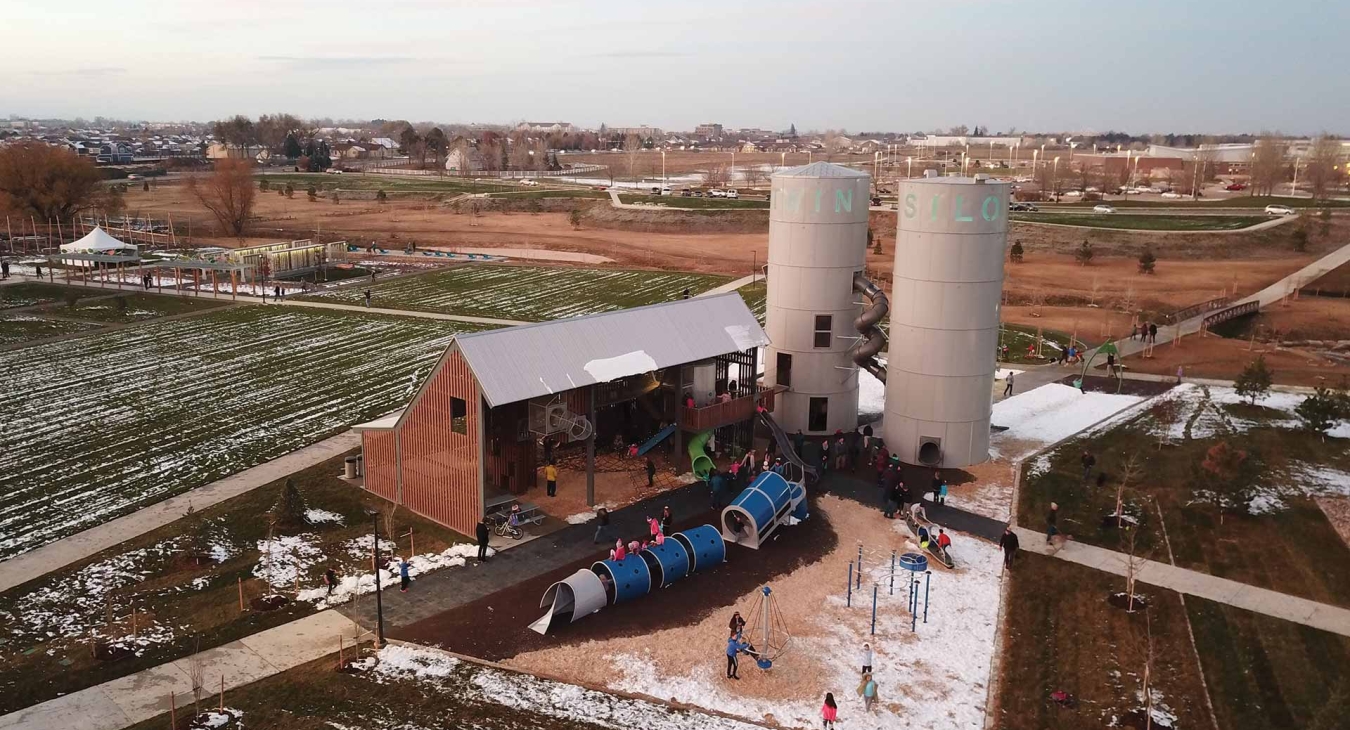 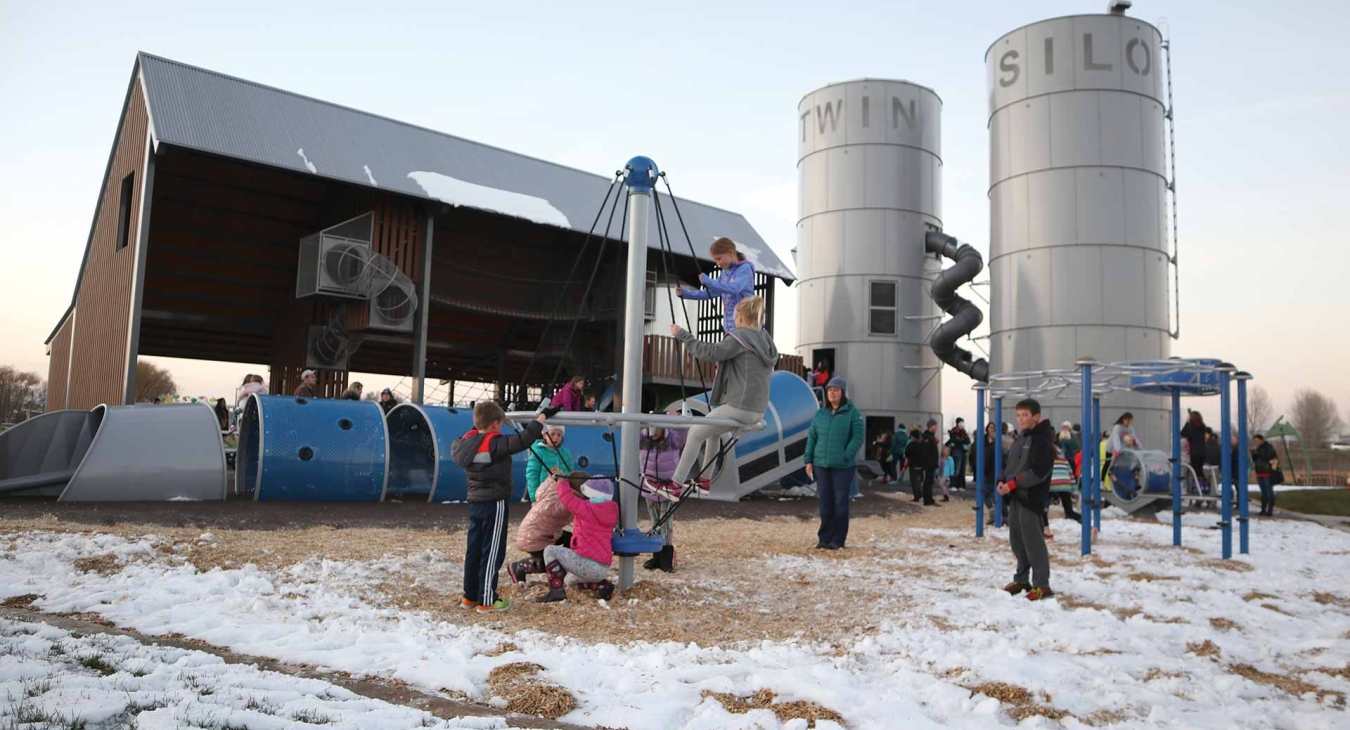 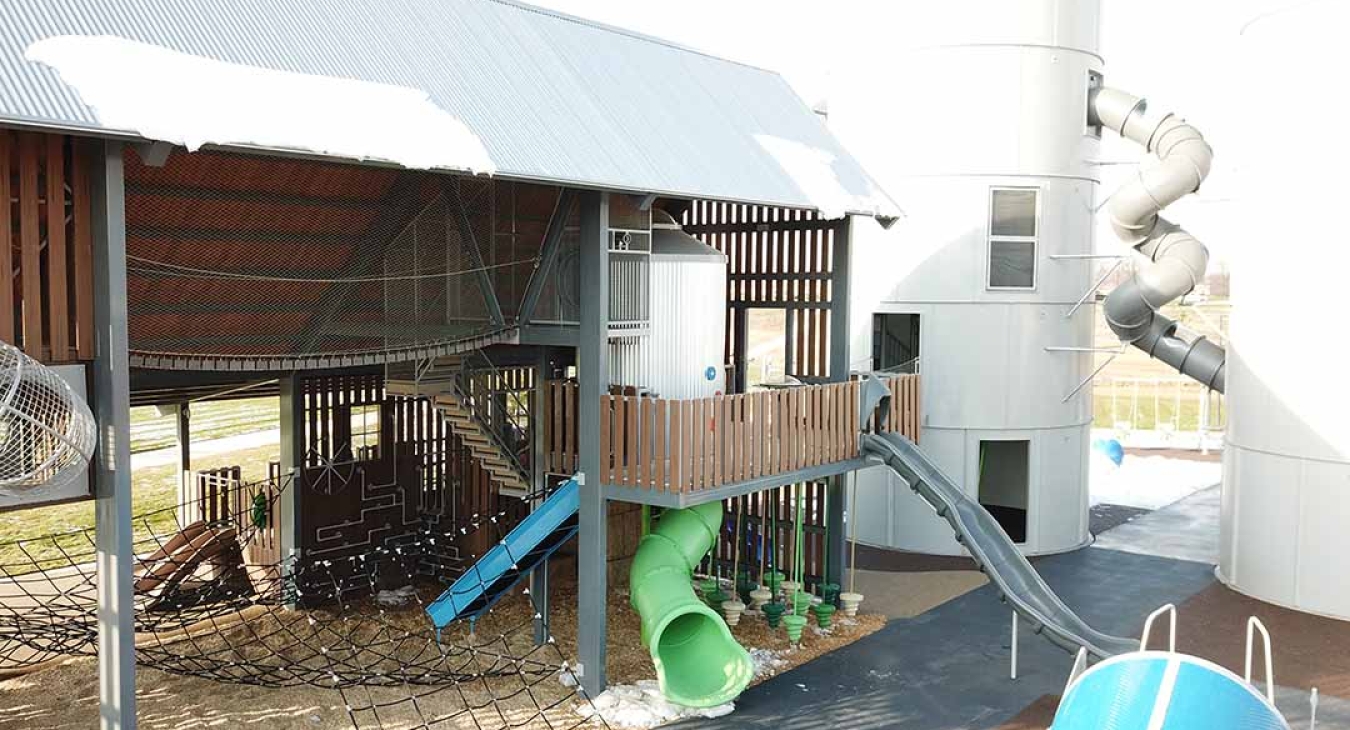 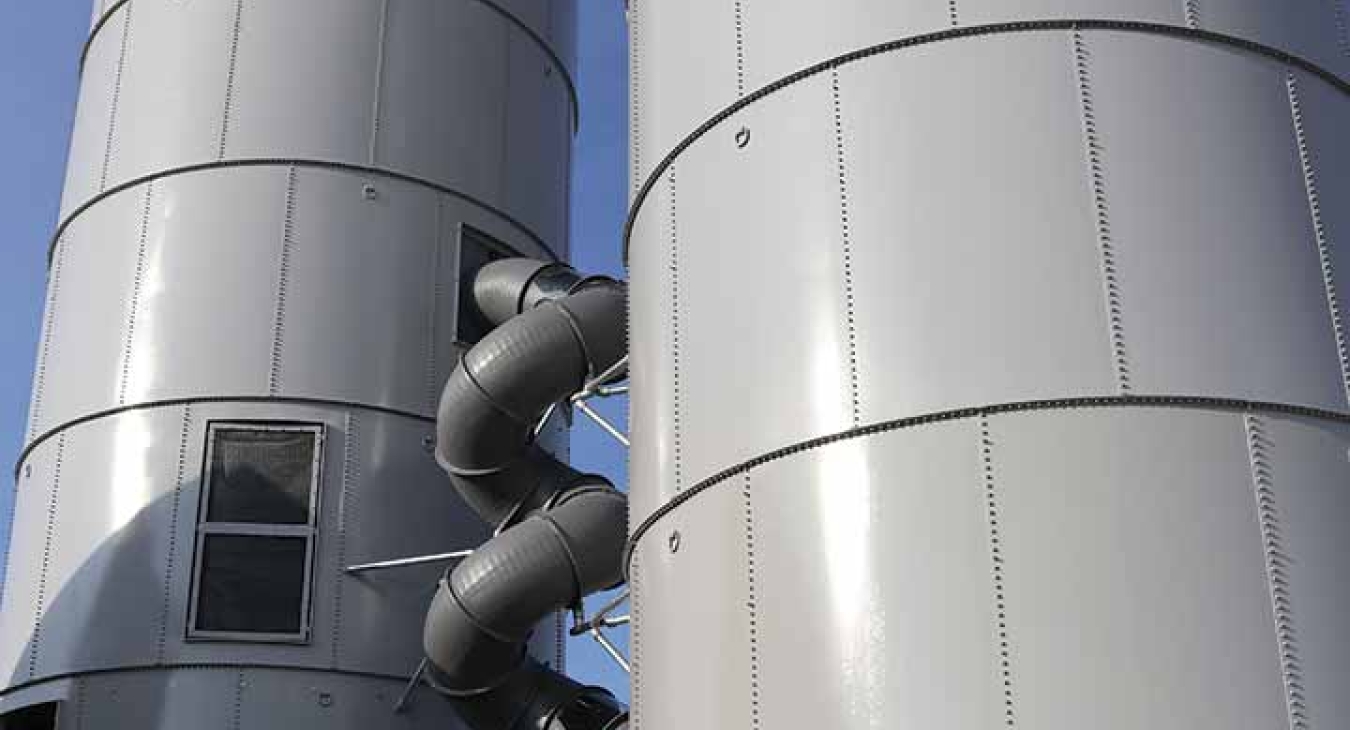 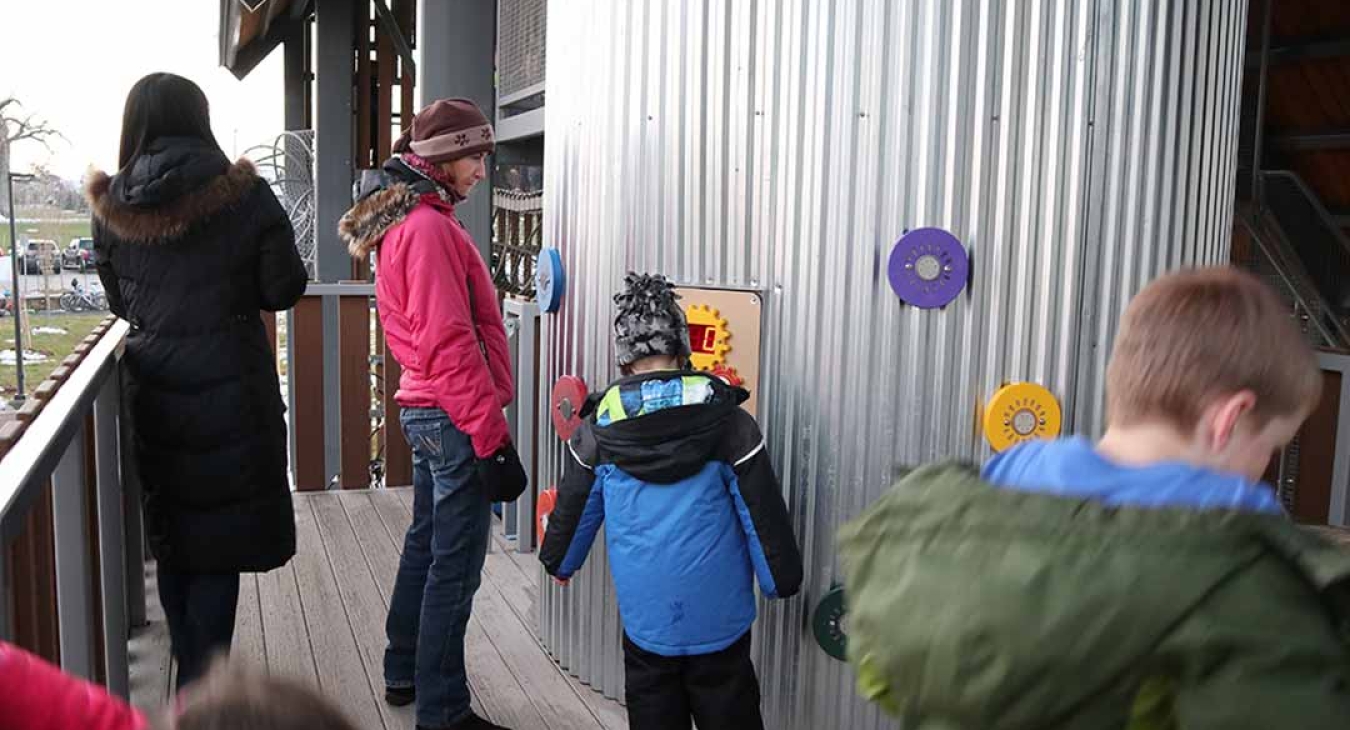 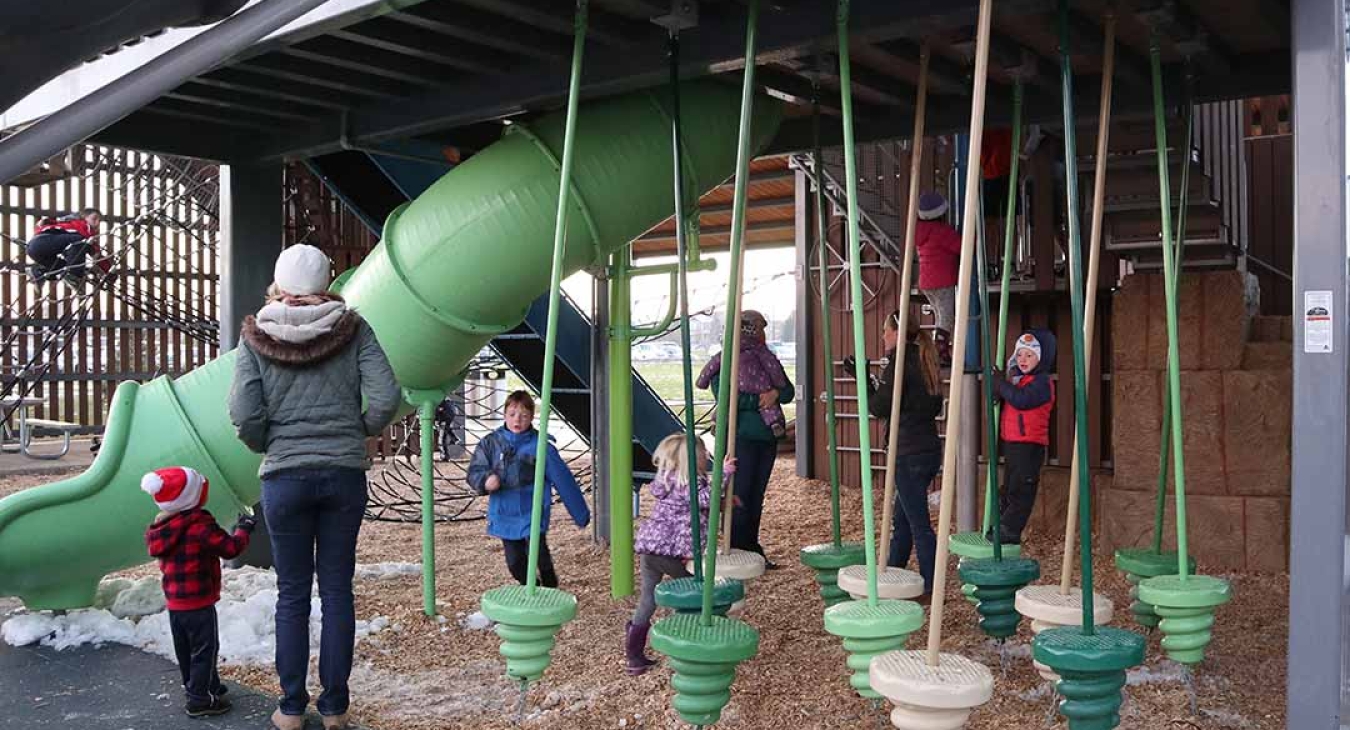 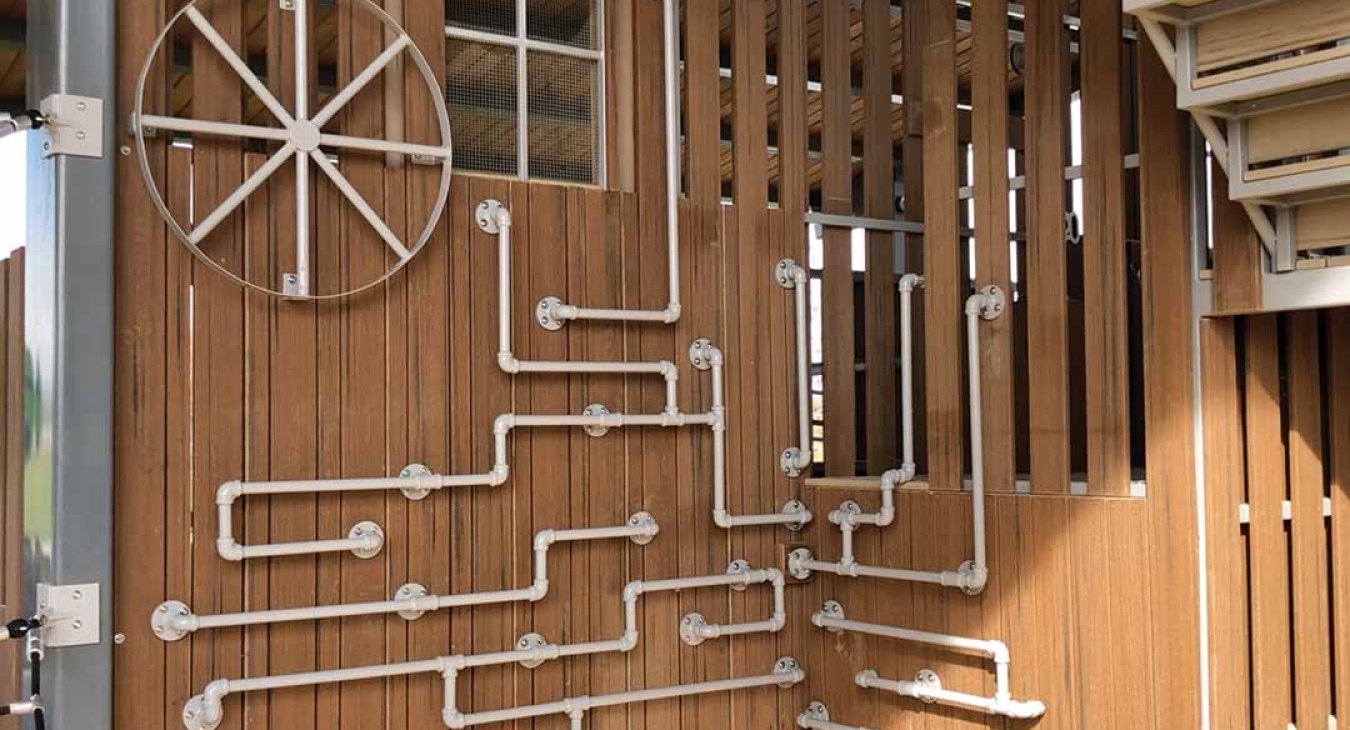 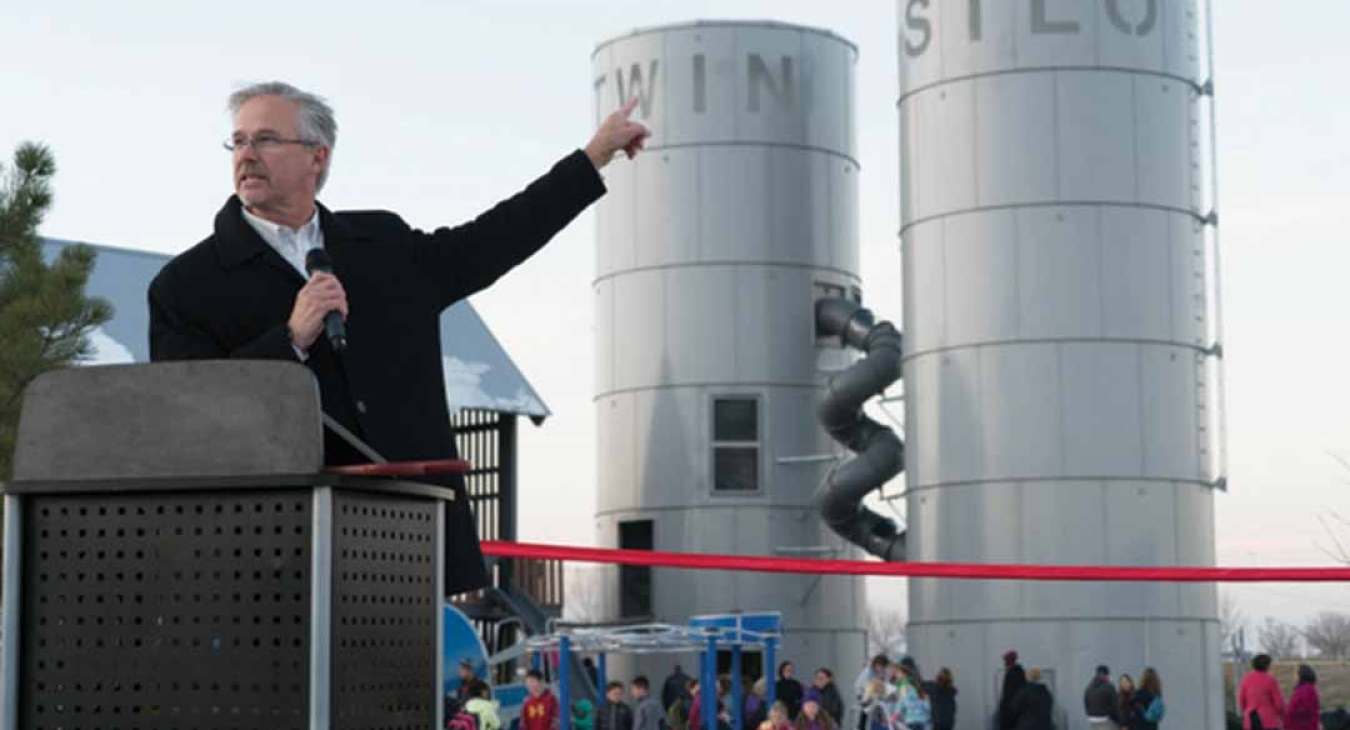 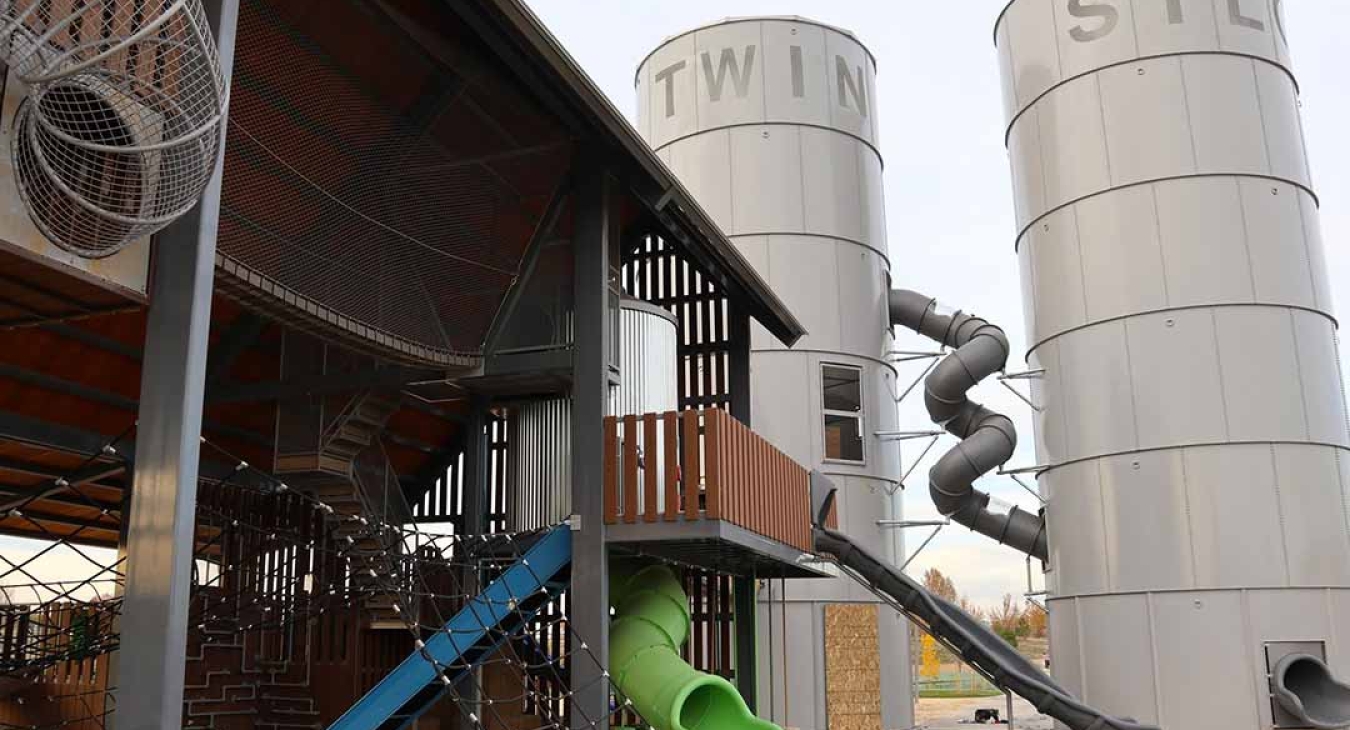 Recently voted #1 out of 9 of the best playgrounds in the Fort Collins area by Northern Colorado Speaks.

54 acres which used to house a sheep farm has become an expansive and exciting park. With a river running quite literally through it, Twin Silo Park is an engaging site. As the name would suggest, the glowing main attraction of the park are the two towering silos that dominate the landscape. Within these metal shells are slides, stairs, and a multitude of interactive play that make Twin Silo Park stand apart from the rest. Alongside the exciting silos is a smaller, conventional playground for the kids and parkgoers. More than a place to play, Twin Silo Park houses an elegant community garden and extensive footpaths. On the eastern side of the park is a large, expansive dog park with a section dedicated to small and shy dogs. In the northern part of the park is a track for Twin Silo BMX (bicycle motocross). The large park is equal parts picturesque with stirring views of the mountains as well as fun for every part of the family.

Built with the blessing and encouragement of the Fort Collins community, Twin Silo Park is part of a city-wide park system plan from the Fort Collins Department of Parks & Recreation. The hope is to include 9 community parks and over 60 neighborhood parks throughout the city. Twin Silo Park, ultimately, was a community effort. Their input was integral in the planning. Because of that, the community has been enthusiastically involved in the cultivation and opening of the park.

It isn’t only the work of the community or the many parts of this park that makes it stand out. The two silos are the focal point of the park. Cre8play, a play and experiences design-build company from Minneapolis, renovated those two old silos. They also designed and built the accessible barn and shelter.

51-feet tall, the silos offered lots of space to fill with creativity and fun. Which is exactly what Cre8play did. Fitted with a spiral staircase, slide entrance, and more, the silo became home to a unique style of play. Twin Silo is where a child (or adult) makes his own choices about how he wants to play. More than stairs to the top, there is a double-helix climber that offers a bit of a challenge for those looking for one. At the top of the slide are lights to alert when it is best to slide. Within the tallest slide in Fort Collins are even more fun gadgets. Funny and entertaining sound effects play as the child moves down the slide. They range from a sonic blast to a toilet flushing! The slide begins in one silo and after two full spirals, brings the rider into the second silo. In this silo are zip lines that lead out to separate parts of the park.

All this alone would already make an exciting park, but of course, Cre8play went above and beyond. A suspended bridge between one of the silos and the rafters of the barn allows for another area of fun. Kids have a balance beam to tackle with full protection from falling on both sides of the narrow bridge and a net of rope below to play in. The barn is made accessible by wheelchairs and others with disabilities as well as the bathrooms. The words TWIN SILO are cut out of the tops of the silos and are fitted with LED lights that change color. Creative, interactive fun is prevalent in Twin Silo Park, making it a must visit for the family!

On November 9th, 2017, the park opened to an excited community. After a year of construction, and enthusiastic participation from the people of Fort Collins, the grand opening was packed with kids and adults alike to marvel at the newest addition to their town. The innovative park generated happy buzz with the first crowd of visitors but that same energy is still felt by people now. With nearly 500 reviews on Google, Twin Silo Park has an enviably high rating of 4.8 stars. Of course with reviews such as these, how can they not?

“I'm obsessed with this part[sic]. It's so community-friendly with their beautiful grounds, cute little playground, amazing dog park, and great walking trails. It's one of my favorite places to take my pup and my family,” from November 2018.

And this one from August 2018, “This is one of the coolest parks I've ever been too.  Very modern playground with games, sounds, unique equipment, slides, ropes, zip line, swings, and more...My son loves it and so do I. Highly recommend.”

Cre8play took their work from Twin Silo Park and used it in miniature at the 2018 National Recreation and Park Association Conference. A smaller silo and spiraling slide was used to represent the work Cre8play had done in the past. Their presentation contained the interactive aspects of sound, similar to Twin Silo Park. Their effort earned them first place with Best in Show. Cre8play has designed and built hundreds of experiences for parks, malls, museums, schools, hospitals and offices around the country.

Twin Silo Park is a perfect example of how the community can work together to create something truly amazing and appreciated by everyone! From the fun and interactive silos to the budding community garden, Twin Silo Park shows how important and impactful parks and community spaces are. 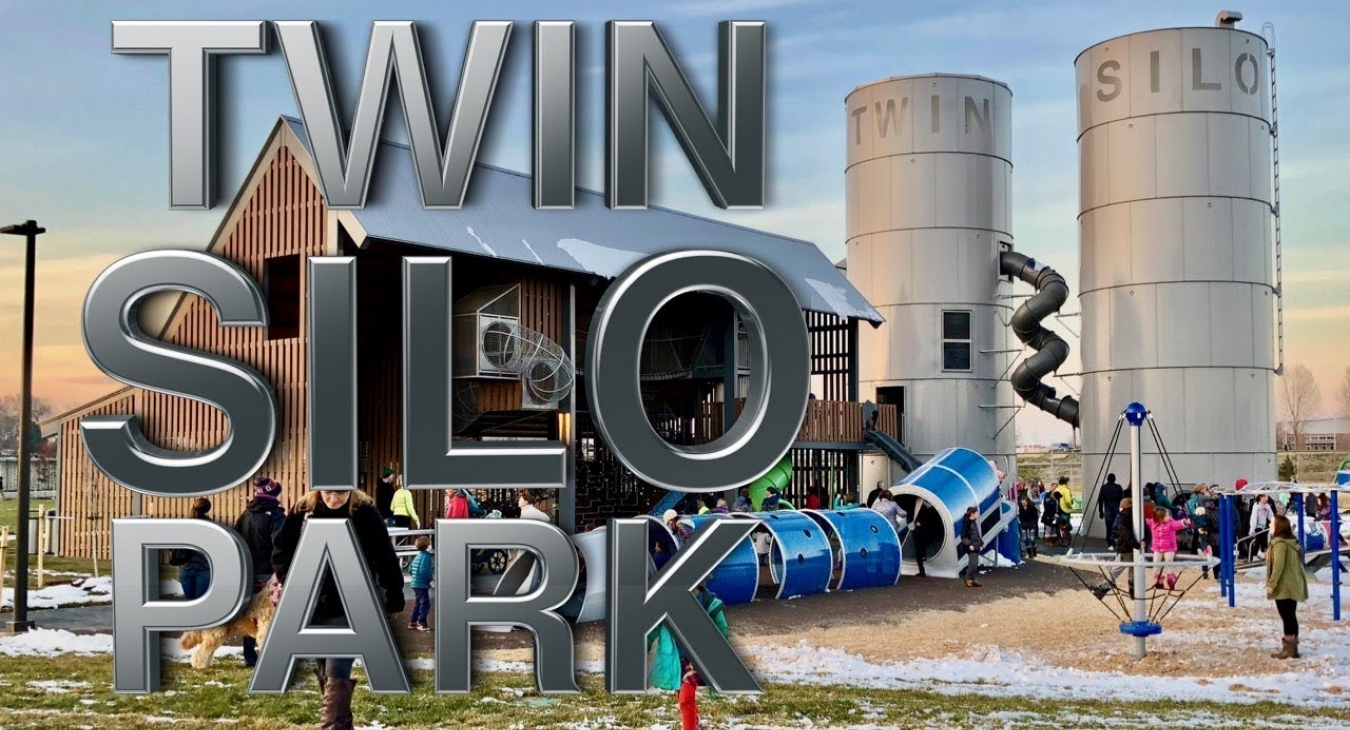