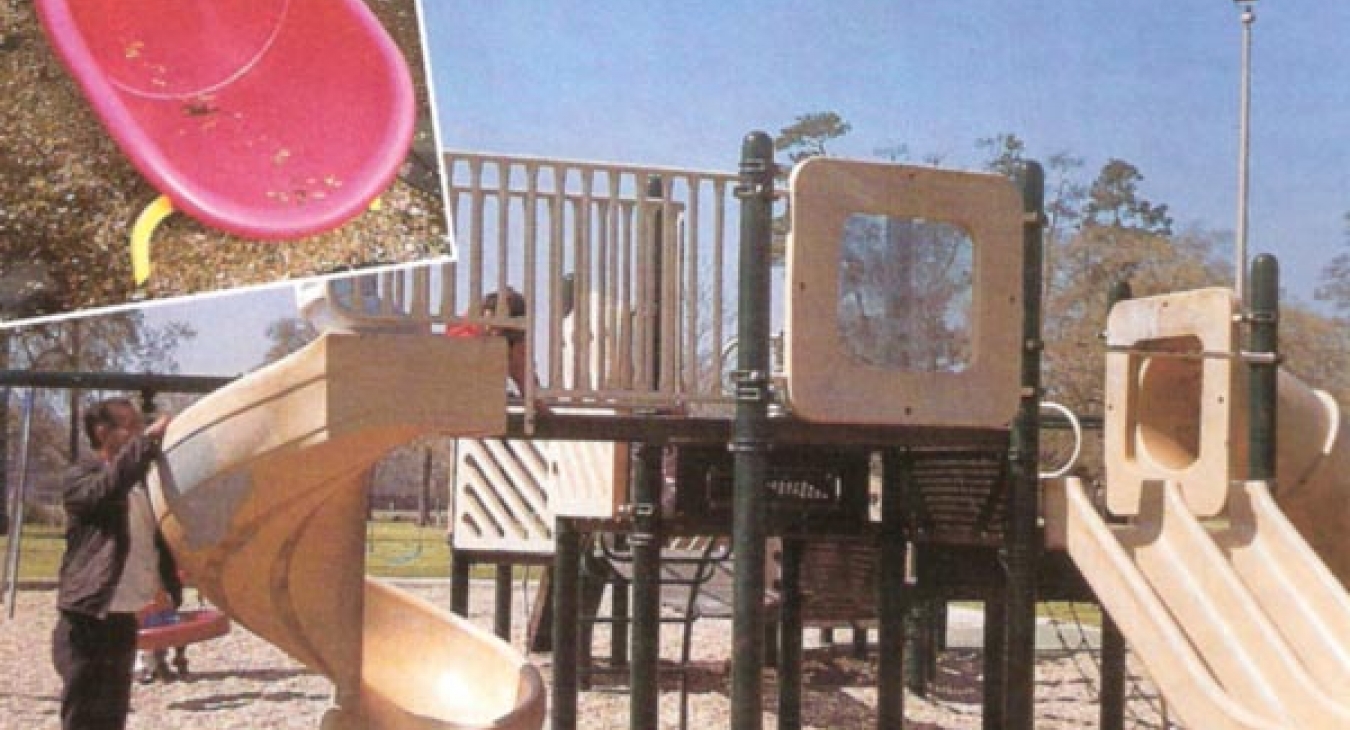 When is a standard noncompliance a first priority hazard and what should be don about it without eliminating use of the playground?

One of the objectives of playground safety audits is to recognize very serious hazards. Generally speaking a "Class ·1 Hazard" has been defined as one that could cause an injury which would result in death, brain damage, permanent paralysis, loss of vision or a limb, or the destruction of an organ. The CPSC has found four major causes of this type of injury: falls to hard underlying surfaces; entanglement of clothing, strings, or ropes; head entrapment in equipment openings; and impact by moving or tipped apparatus.

Some playground safety inspectors have taken the extreme "it's either black or white" approach to identification of hazards by incorrectly labeling any fall hazard, entanglement, head entrapment, or impact hazard as "Class 1 ". This has resulted in many pieces of playground equipment being inappropriately condemned as extremely dangerous.

What is necessary is an objective and comprehensive evaluation of each situation. In each case some of these factors need to be considered: Where on the apparatus is the hazard located? What is the probability that a child will be exposed to the hazard? What would be the likely consequences of a child being affected by the hazard? Would the affected child have any opportunity to rescue him/herself before incurring severe harm? Does the peril preclude any possibility of intervention before dire consequences occur? Depending upon the situation, there may be other factors to consider as well. The point is that all fall hazards, entanglements, head entrapments, or impact hazards should not automatically be labeled "Class 1 ".

Playground safety inspectors are trained to use special templates, probes and gauges to verify the presence of certain hazards on public playground equipment. Use of these devices are prescribed in the CPSC Handbook for Public Playground Safety and ASTM Specification F"l 487. Some inspectors have come to rely upon these tools too much in their enthusiasm to identify hazards in the playground, rather than limiting them to checking public playground equipment. I have heard reports of individuals using these devices to determine the safety of such items as drinking fountains, fences, picnic tables, park benches, bicycle racks, restroom doorknobs and even toilets! The rationale for using the probes and gauges on these items has been that they are located in the “playground environment” and thus should be subject to the playground safety criteria. Proximity of park amenities and playground equipment does not turn site amenities into playground equipment any more than proximity of a bird feeder to a flowerbed makes the feeder need fertilizer and pruning. There is an old saying”for each task there is a tool” - not all construction can be built with just a hammer. By attempting to evaluate non-playground equipment with these probes and gauges, some safety inspectors have been not only using the wrong tools, they are also applying criteria not intended to be applied for these site amenities, thus inappropriately labeling some conditions as hazardous.

A similar problem occurred when a safety inspector applied the criteria from ASTM F1487 to public playground equipment, as well as soft contained playground equipment. Each type of equipment has it’s own unique safety concerns, addressed by a specific safety standard. Fruit and meat may both be food, but the quality standards for apples are very different from those for pork chops.

Bottom line: Safety inspectors must use the appropriate criteria, procedures, and tools to evaluate each element they check. Safety inspection is not a “one size and color fits all” situation.

When, after a thorough evaluation, a condition is rightfully identified as a “Class 1 hazard,” the actions taken by the playground owner must be just as carefully considered. There have been some knee jerk overreaction to this which have resulted in the unnecessary loss of the use of the rest of an affected apparatus of even the unjustifiable closing of the entire playground. Such extreme approaches are usually uncalled for and cause unwarranted loss of play opportunities for children and valid criticism by parents and government officials. Such extremist tactics can cause playground safety programs to be tagged as anti-play and thus anti-kids by the press, thus actually defeating the value of such a program.

In many situations, the first issue is what to do about the problem during the interim time before the hazard can be removed or corrected. The action to be taken should be a balance between a) amending the problem and b) minimizing the impact upon the play use of the rest of the apparatus. It is important to immediately secure the hazard so that children cannot be put in jeopardy of severe harm; but this should be done in such a way as to still permit unfettered use of the rest of the equipment, with minimal disruption of normal play patterns. In many instances, this can be done without unduly drawing attention to the problem. If done appropriately, even a temporary blocking off, covering, or securing of a hazardous condition can be achieved without causing alarm or complaint.

It has been done successfully by making any temporary hazard control as inconspicuous as possible and avoiding brightly colored material that would draw attention to the modification. A good practice is to make any shield, covering, or guard only as large as necessary to do the job effectively. Do not use material that are subject to rapid deterioration or easy removal. The following which have been used by well-intended but impractical playground operators in the past, are usually inappropriate for temporary modifications to playground equipment: rope, corrugated cardboard panels, thin plywood, plastic fencing, plastic or cloth bags, duct tape, thin-gauge wire, “police line” flagging, portable traffic guards or c ones, radiator hose clamps, rubber belts, and other similar items.

Do not temporarily make safe any playground hazard in a manner such that children are tempted to use the hazardous portion of the equipment “because it has been obviously repaired.” Children often view any change to the equipment as an opportunity to use it in a new way - they may climb or otherwise attempt to play on these temporary modifications.. Part of the temporary hazard control may be to install devices that divert the use of the apparatus away from the hazardous area until the problem has been corrected.

Contact a representative of the equipment manufacturer to obtain replacement parts for permanent corrections to any hazardous condition. Schedule repairs as promptly as possible.,

Concern for safety in our playgrounds does not justify extremism. Our kids deserve the best protection we can provide on playgrounds, but “best” is not necessarily provided by incorrect or fanatically zealous safety approaches.