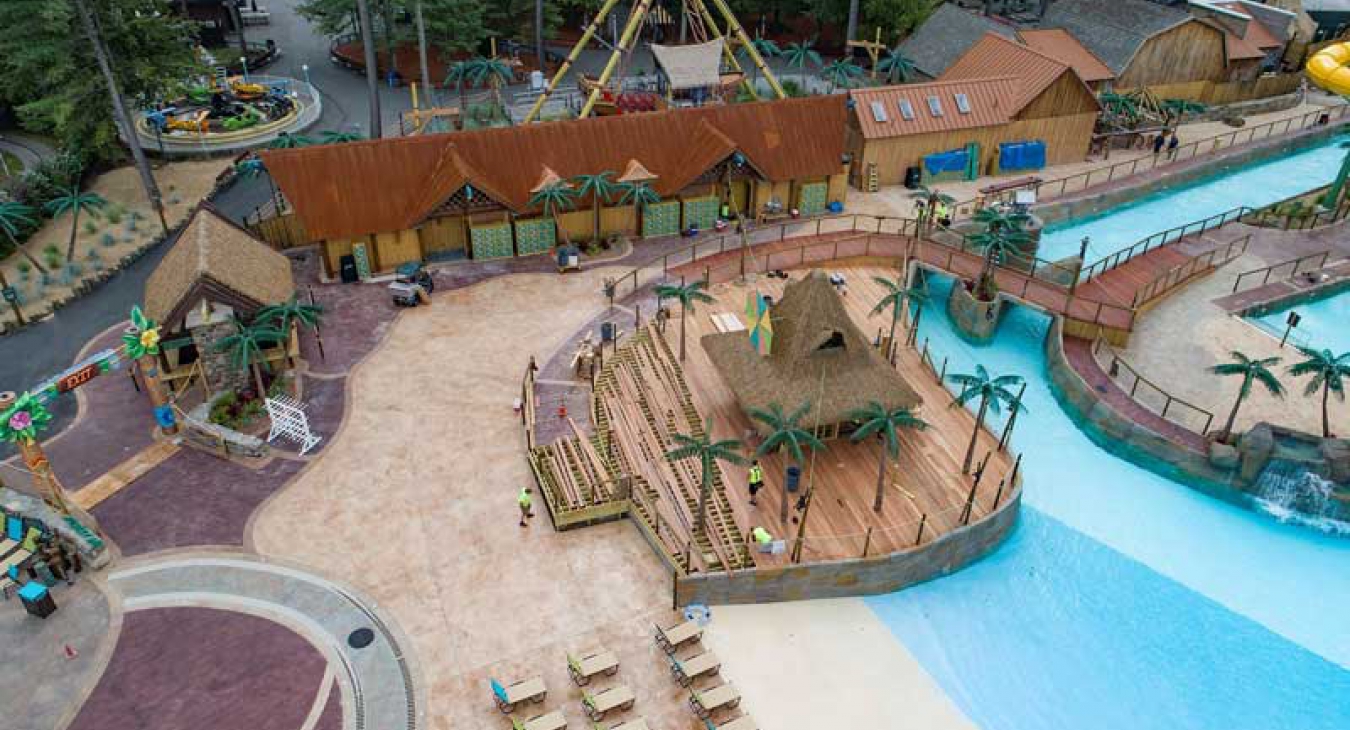 After more than 117 years, Canobie Lake Park keeps looking ahead with long-lasting Bomanite.

An adage says if you want something done right then do it yourself. In 2019, the idea of doing nearly anything yourself probably seems antiquated. However, despite today’s tech-connected, hyper integrated world, true visionaries and craftsmen still often really can’t imagine doing it any other way. Such is the case at Canobie Lake Park, a hand-built amusement park located on the shore of Canobie Lake in Salem, New Hampshire, that first opened to the public in 1902. Founded as a trolley park, the original visitor experience featured botanical gardens, a penny arcade, and a few early amusement rides. In 1936 to the delight of visitors, the park’s second owner installed a new wooden roller coaster named the Yankee Cannonball; a ride that still draws crowds 83 years later. In 1958, Canobie Lake Park was purchased by three close friends from New Jersey who decided to take on the challenge of renovating and revitalizing it themselves.

“Every year they add something new,” says Mike Harrington of Harrington Bomanite, a decorative concrete contractor who has been installing concrete at Canobie Lake Park for the better part of thirty years. One of the park’s three owners, Raymond Captell, is the visionary responsible for dreaming up new crowd-pleasing environments at Canobie Lake Park. Harrington shares that Captell is never short of ideas or light on expectations. “Ray always has a clear picture of what he wants the finished attraction to look like. Maintaining the park’s rustic, historic, handcrafted feel and using high-quality materials are both very important to him.”

Harrington was first approached by Captell about using Bomanite’s stamped concrete to create realistic, durable, repeatable concrete patterns as borders around various attractions sometime in the early 1980s. Since then, Harrington and his team have been back essentially every year, adding textures, upgrading features, and helping tie together the park’s many different attractions with a wide variety of patterns and textures. The first name in stamped concrete, Bomanite imprint systems produce repeatable forms in cast-in-place architectural concrete such as slate, granite, limestone, sandstone, cobblestone, and brick, among more than a hundred different patterns. Perhaps the most unique aspect of Harrington Bomanite's longstanding relationship with Canobie Lake Park is the way the two enterprises go about their business.

“We’ve never had a contract or a precise scope of work in all these years. It’s always been an estimate and a handshake with Ray,” says Harrington with a light chuckle. “Thirty years ago, when he came across Bomanite’s stamped concrete there were very few people building that way, so we were the choice locally. We’ve been back every year to create something new since, so quality has built the relationship.” 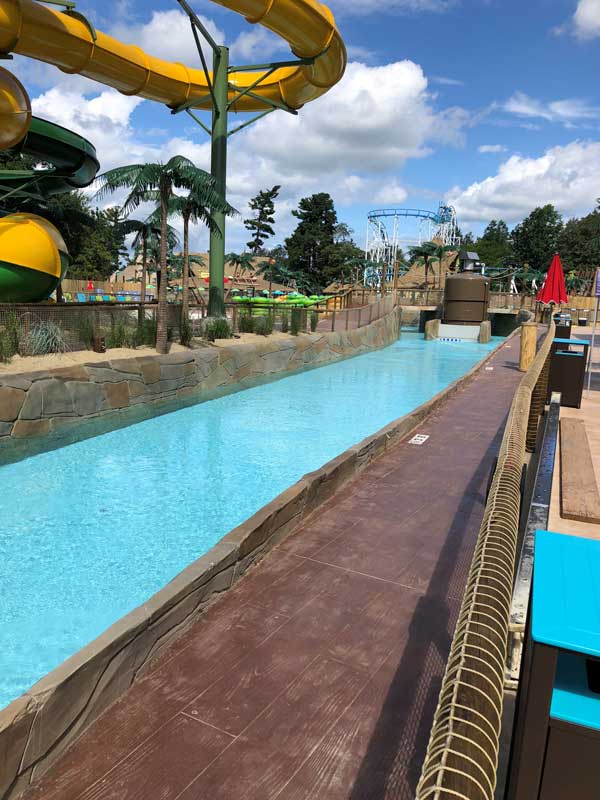 The 2018 addition Harrington Bomanite completed for Canobie Lake Park was Tidal River, a 45,000-SF lazy river with waves, circling the park’s grandest water feature, Castaway Island. Only one of three tidal rivers ever created, after entering a zero-entry wave pool guests loop around the tranquil island oasis propelled by waves that form every ten seconds. In addition to the river, the expansion included adding a new kiddie pool and significantly enlarging the pool deck facing Castaway Island.

“The big challenge was meeting the state and environmental requirements for capturing surface runoff in a way that met the owner’s expectations for aesthetics,” says Harrington. Sitting next to cherished natural resource, Canobie Lake, a primary determinant of what has been built on the property has long been containing the large volume of runoff that accumulates across the park when it rains. “Drainage is a big issue here, but it had to be done in a way that enhances the look and feel of the space,” continues Harrington 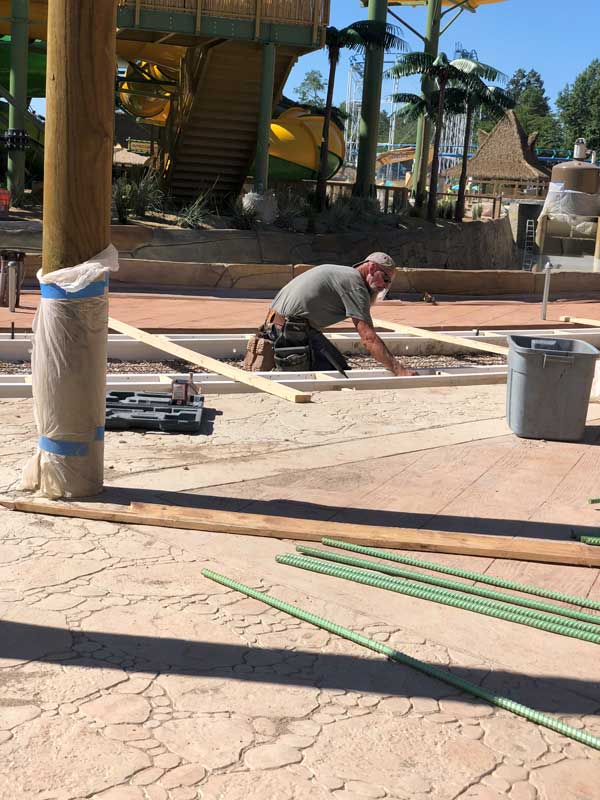 Adding approximately two acres of new hardscape next to the pool meant the need to incorporate an extensive drainage system in the concrete deck. In any pool deck, surface water must drain away from the pool and rather than trap runoff in a catch basin, the design intent was to get it into the ground through natural percolation. While many hardscape options allow permeability including pavers and pervious concrete, Captell was opposed to installing anything other than Bomanite stamped concrete, insisting that the solution be visually harmonious with the rest of the hardscape.

“Ray likes being able to go into the Bomanite palette and choose textures and colors that achieve his intentions,” says Harrington of the eventual design. In this case, the collaboration between Harrington and his client incorporated three different imprints and produced a meandering pebbled brook, bisecting the deck to elegantly conceal the drainage system. 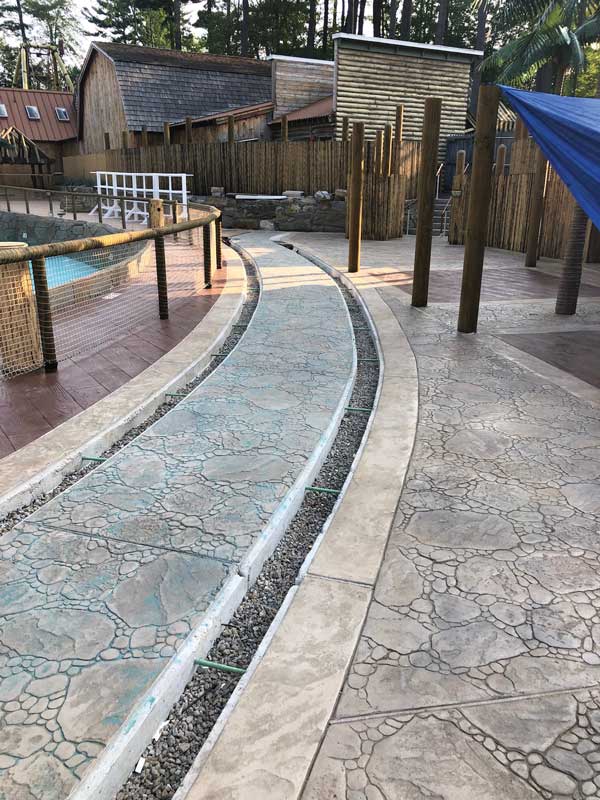 A four-foot-wide band of Bomacron Garden Stone pattern was brought to life by a custom aqua blue color hardener to reveal a ripple of liquid in bubbling motion. A 12” drain-grate on either side of the brook catches runoff and directs it below-grade where an engineered system of crushed stone 4’ deep allows the water to absorb into the ground naturally. Captell, himself, was the one who found the ribbed drain system, a critical component that snaps together and allows the channel to seamlessly follow the undulating wave of concrete. Beach areas abutting the pool were simulated with Bomacron Regular Slate Texture and light brown tones of color hardener and release agents to achieve sandy beach vibe. On the lounge deck and around the Lifeguard walks, Bomacron’s 11.5” Boardwalk pattern imparts a wood-grain quality that adds depth and balance to the island getaway experience.

“We’ve been working with Bomanite since 1972,” finishes Harrington proudly. “It’s amazing for us to still be able to do something that feels new, challenging, and exciting after all this time. We’ve still got it, and with Bomanite, the possibilities remain endless.”