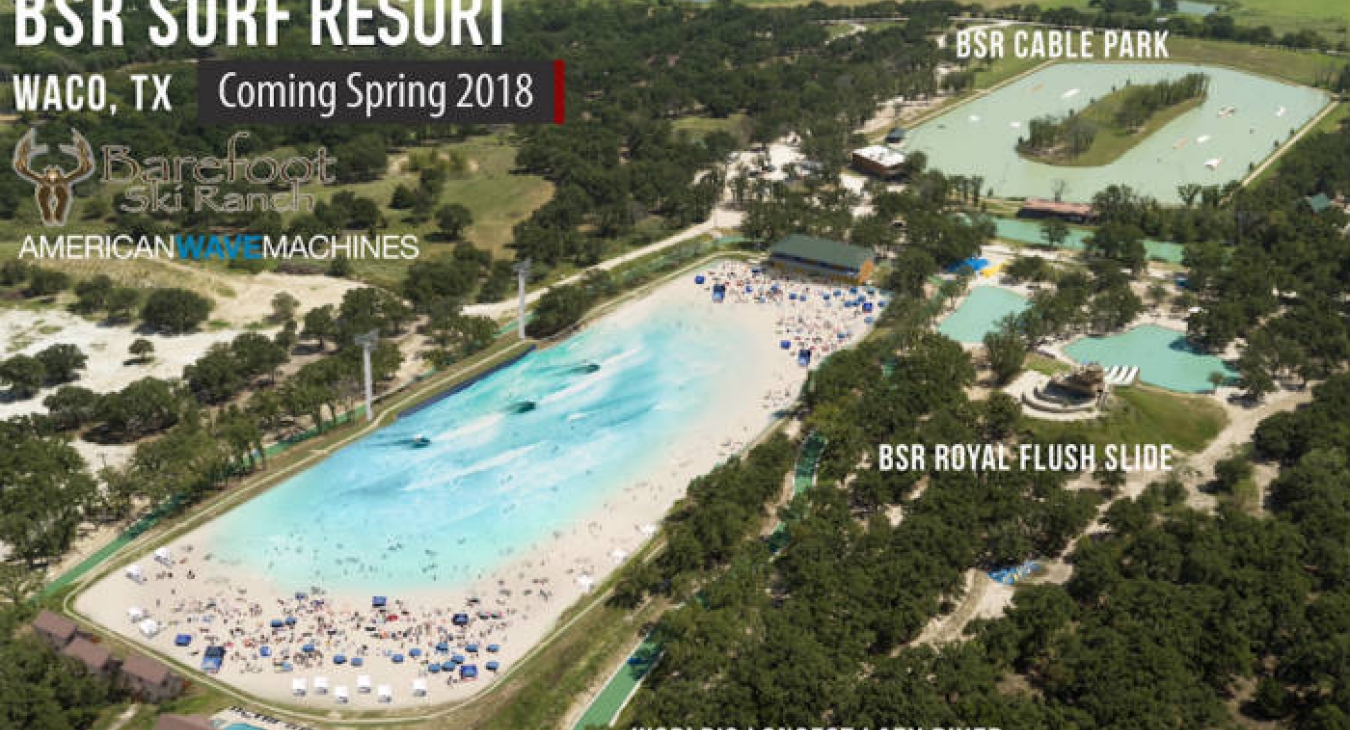 Barefoot Surf Resort, formerly known as BSR Cable Park, announced their partnership with American Wave Machines back in 2016. Together, the two are bringing what will be the first wave pool of its kind to the middle of America. PerfectSwell™ InfiniteOcean® technology is what Bruce McFarland says is, “the most authentic surfing experience outside the ocean.”  Bruce also adds that “wave quality, size, duration, and frequency can be controlled at the touch of a button via an iPhone or iPad, with no wait time for waves.”

Kelly’s wave and that of NLand Surf Park are closer to 6-14 minutes when it comes to pumping out identical waves. The most similar version of the AWM pool that’s in development is found in the Basque Country, at the Wavegarden Cove. Comparable to a small lake, the BSR pool comes in at a full two-acres of water. Making it the largest American Wave Machines built surf pool to date. What seemed like a lofty aspiration is now becoming very close to being operational. The facility plans to open this coming March of 2018, and they’re already selling season passes.

This “mini ocean” in the middle of America, it’s quickly going to make Barefoot Surf Resort a legitimate location for an inland surf trip as well as create a dreamy Caribbean-like environment to bring the whole family.

When Bruce McFarland founded American Wave Machines, his goal was to create waves that mimicked nature as closely as possible. Whether a river wave or ocean waves, AWM has the originating technology for both. PerfectSwell™ Infinite Ocean® is of the later, the design replicates waves the way they’re found in the ocean. By creating “circular particle motion waves” they’re able to create waves similar to a classic New England point break, a near twin of the Newport Wedge or even a mush-burger for good measure. Even with the diverse wave making capabilities, one of the most attractive parts of this technology is the level of safety. Unlike that of KSWC and Wavegarden, the PerfectSwell design has no major moving parts through the water. The waves are generated via air chambers which also means there’s no wait in between waves.

It’s a “designer wave house” and there’s no limit to the type of wave that you can produce. They use air chambers that, at the touch of a button can fire at different patterns and sequences…basically a line up of underwater air-cannons. The options and sequence settings allow you to chose when and which cannons fire and which ones don’t. For example, firing only the first two will create a point break style, firing all of them simultaneously will create a big closeout and everything in between. With no wait in between waves, similar to the Wavegarden Cove, sessions with multiple people can happen with everyone catching identical waves.

“You can make a point break, a beach break, refraction waves, or a mush burger if you wanted. If you fired all the chambers at once the lagoon would turn into one huge closeout.” Cheyne Magnusson told StabMag

“This will be bigger and better-quality surf,” McFarland said, “we have more control with our technology. We can combine pieces of waves and create shape and amplitude. Ultimately, the goal is to find surf like you’d find at an ocean with a nice beach environment.”

North Americans no longer will have to dream of a pool environment like that of the Basque Country – which isn’t open to the public anyway. Barefoot Surf Resort will have the first wave pool of its kind, as well as the biggest, coming in at a full 5-acres with 2-acres of water. The lake is built on a watershed, so if there are any problems that require the lake to be drained, the millions of gallons of water won’t be lost.

BSR is a crazy-cool 500-acre ranch facility. The whole lot is fenced in with big game roaming around; like surfing in a wildlife sanctuary. Bruce McFarland, President of AWM, said, “I saw more wildlife in 4 hours at BSR than I’ve seen in years of hiking and mountain biking. My whole team is totally stoked to work with the folks at BSR.”

It’s not just a surf park either, BSR touts one of the top water facilities in the country. Hosting a 3,600-foot long lazy river, a 120-foot tall water slide and America’s number one cable wakeboarding park.

With cabins, a restaurant/bar and now with the addition of a surf lake, this will be the first ever in-country surf resort for the whole family.

Along with the wave pool, they’re adding more cabins to house surfers that want to make a trip out of their visit. Waco is conveniently located just under two hours from DFW airport which is a major hub for flying internationally. Making BSR a perfect place to schedule a two-day layover to warm up before you get on your way to Indo, Hawaii or wherever else your travels take you. Imagine how on point your surfing would be after spending a few days surfing unlimited waves at whatever style you want before arriving at your destination.

Construction is moving right along at Barefoot Surf Resort. They’re already selling season passes for $999 and renting out cabins for over-nighters.

Exploring new and unique waves is one of the most exciting aspects of being a surfer. Whether they’re in a pool or in the ocean you can’t look at a crystal blue, barreling five-foot wave and say that you don’t want to get in there. Other than going to Indo or the North Shore in the winter time, there’s no other way to take a surf trip for under a week and guarantee perfect waves. From a competitive standpoint, there’s really no drawbacks. Jamie O’Brien says, “it’s the perfect platform to say, ‘do you surf better than me?’ because we’re going to serve you two of the same waves and may the better surfer win.” When the world starts to experience this – everyone is going to want one in their backyard.