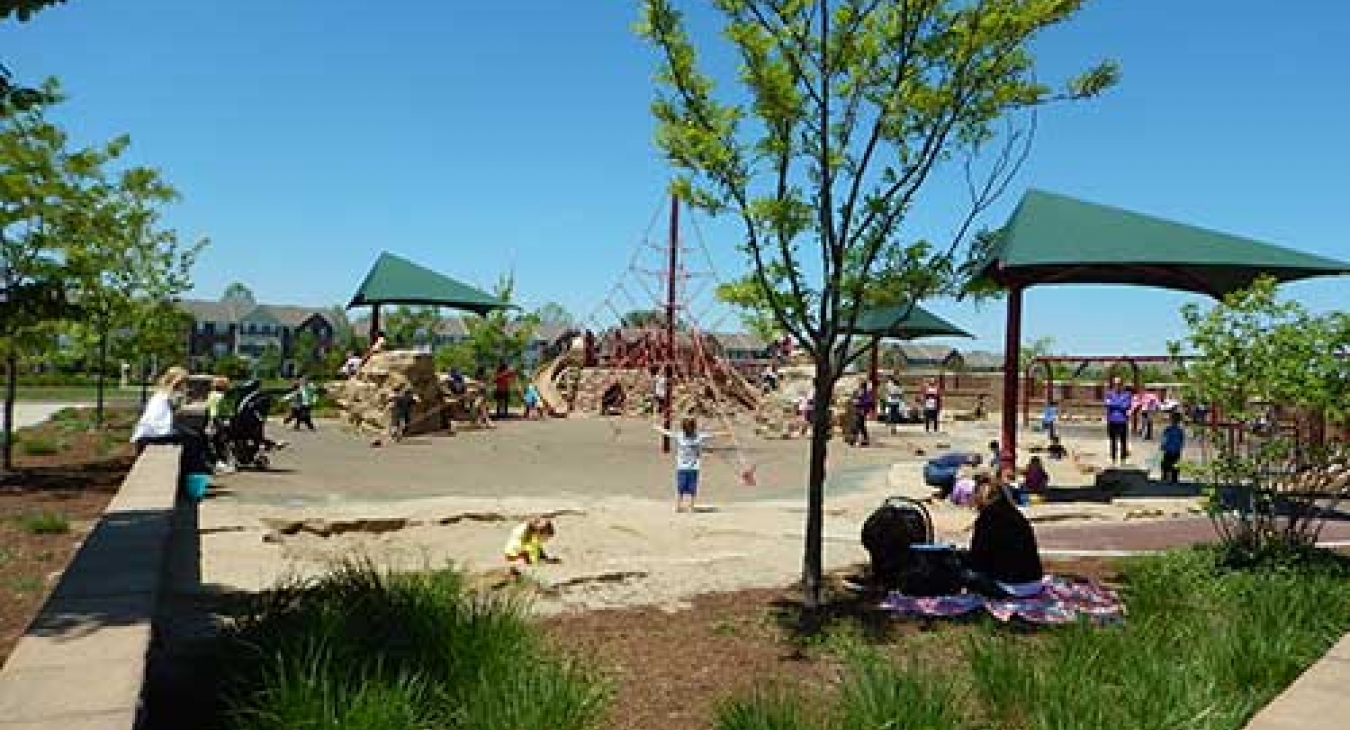 This summer marks the 25th anniversary of the Americans with Disabilities Act (ADA). Being reflective of an anniversary as people often are, we thought we would take some time to reflect on the evolution of the accessibility guidelines for play areas, what we know now that we didn’t know back then, and contemplate where we need to look to the future.

When the ADA accessibility guidelines were originally adopted by the U.S. Department of Justice in 1991, the standards only addressed bricks and mortar buildings. The uniqueness of recreation environments like trails, swimming pools, beaches, golf courses, and playgrounds were too complex to easily apply technical provisions written for buildings. From 1994-95 the U.S. Access Board, the designated federal agency that develops accessibility guidelines under the ADA, convened a national advisory committee to develop preliminary guidelines for recreation facilities. When the report was issued for public comment, the sections on playgrounds (believe it or not) and trails, received the greatest volume of feedback with conflicting viewpoints. This was during an era when public involvement in rulemaking was highly encouraged by the Clinton administration. So in 1996 the U.S. Access Board ventured into regulatory negotiation to develop accessibility guidelines specific to play areas covered by the ADA.

A Regulatory Negotiation Committee was brought together with key stakeholder groups like the National Recreation and Park Association, ASTM International (ASTM), United Cerebral Palsy Association, National Association of Elementary School Principals, and National Easter Seal Society. The committee convened in a 16-month process by which consensus would need to be reached on every provision it would recommend to the Access Board for rulemaking.

The effect of the Regulatory Negotiation Committee’s recommendations has had a lasting impact on the design and manufacturing of public playground equipment and surfacing. The committee recommended that elevated composite structures have minimum widths for transfer steps and wheelchair access, along with turning space. They recommended hand supports for stairs and heights for equipment where children are meant to transfer. One of the biggest impacts of the committee was regarding equipment where elevated structures were installed. The committee recommended that in addition to the elevated structure, ground level play components should be required. This requirement was intended to give children with mobility impairments more options on the ground when they could not physically transfer to an elevated composite structure.

Lacking significant research data, the committee struggled with transfer systems, ramps, and surfacing. They considered options such as a maximum height for elevated platforms with ramps and whether to require molded swings with back supports, but ultimately decided to withhold recommendations on these issues. The Regulatory Negotiation Committee presented its report to the Access Board in 1997, and the Access Board issued a final rule for accessibility guidelines for playgrounds in 2000.

Peggy Greenwell was the Access Board staff liaison to the committee along with a federal mediator selected to facilitate the process. “This [regulatory negotiation] is a supplement to the traditional rulemaking process and allows face-to-face negotiations among representatives of affected interests in order to achieve consensus on the text of a proposed rule. In many ways, it was a ‘leap of faith’ for the Board. Essentially, it meant agreeing to accept whatever the committee members reached consensus on. It was the first time the Board had ever used this process in its rulemaking efforts,” says Greenwell.

When asked to measure the success of the resulting accessibility standards for playgrounds, Greenwell replies, “Measuring the success of accessibility standards is very complex. On a very basic level, the Board was able to establish minimum accessibility guidelines, which later became standards in 2010. Prior to this, no ADA standards existed in this area. Virtually every newly constructed or altered play area built since March 15, 2012 must comply with the standards. No longer can a Title II or Title III entity ignore this requirement and build an inaccessible playground.” Greenwell continues, “Beyond this, the success of the provisions can be measured on many different levels. Has the opportunity for children with disabilities to play alongside their peers increased? Do the provisions provide adequate guidance for owners and operators for the design and construction of play areas?”

However, the provisions were still met with resistance through the early 2000s. “The codes tend to make people think about what they can’t do rather than what they can do! The codes have not elevated the design process. It has made places more accessible by kids with disabilities, but not necessarily elevated design practices,” says internationally acclaimed designer Susan Goltsman. Best known as one of the pioneers of the universal design movement in play areas and landscape, Goltsman represented the American Society of Landscape Architects on the Play Areas Regulatory Negotiation Committee. In her reflection, Goltsman says of the regulatory negotiation, “The process was really about endurance, whoever stands firm on their opinion the longest wins. It is a democratic way of doing it, but if we were really trying to create healthy human habitats, we would be looking to the ways in the environment that make it work [best for everyone].”

Goltsman spent hours at the negotiating table with her fellow committee members like John McGovern and Cindy Burkhour. McGovern represented the National Recreation and Park Association on the committee. McGovern says, “In 1995 there were only a handful of playground manufacturers that were really aware of accessibility concepts. That is very, very different today. Today every manufacturer not only knows access concepts but incorporates those into plans, sales pitches, and yes, real playgrounds. I see so many more people willing to make access integral to the site. Candidly, it wasn’t that way in 1995. People looked for exceptions so access could be minimized or avoided.”

“Now people consider kids with disabilities when they are planning a playground,” says Cindy Burkhour, who represented TASH (formerly The Association for Severely Handicapped) on the Regulatory Negotiation Committee. “We have made product improvements.” Burkhour is most encouraged to see the manufacturers, like Playworld Systems, Landscape Structures, and PlayCore companies, have developed inclusion design guides for their sales staff and prospective clients.

McGovern sees the accessibility standards applied in public playgrounds throughout the United States and has been very direct in recent years. “I am not sure it is a failure, but we were not innovative enough to create an incentive for playground owners and operators, and manufacturers, to use ramps. Hindsight is always better, but we know now of course that transfer systems just don’t work for 95% of kids who use mobility devices. Either they can’t or won’t transfer, meaning that most composite play structures’ elevated play components are unusable for them,” says McGovern.

Burkhour adds, “If a kid gets up to an elevated deck with their wheelchair or walker, then they should have an expectation of what can be done on the elevated platform.” Burkhour suggests much more is needed from the standards to clarify expectations when the child stays in their wheelchair and when/if they leave the assistive device to use the equipment. She believes the levels of challenge should be revisited with considerations for contiguous experiences – where children can climb together, one choosing the straight up climbing wall, the other choosing the less steep route with more body supports.

And then there are the accessibility requirements for surfaces. The technical requirement for the accessibility of play surfaces used as the accessible route probably generated the most “head scratches” among playground owners and the surface industry over the last 15 years. The ADA Standards referenced the ASTM F1951-99 Standard Specification for Determination of Accessibility of Surface Systems Under and Around Playground Equipment. Over the last decade, leading surface experts in the field have urged ASTM to update the standard and clarify the test protocol, so it can be conducted at actual playground sites instead of only in the lab environment. Unanswered questions and concerns on installation and maintenance even led to an Access Board-funded longitudinal study of playground surfaces. Last year the Access Board published a technical guide on playground surfaces following the release of the study, “Surfacing the Accessible Playground: 7 Things Every Playground Owner Should Know About the Accessibility of Their Playground Surfaces.” Unfortunately, the ASTM Subcommittee on Playground Surfaces has yet to advance an effective field test to determine the firmness and stability of playground surfaces related to accessibility.

There are some surface manufacturers that have been working to ensure the accessibility of their products and increase awareness. “As a manufacturer of a loose fill surface called engineered wood fiber, we’ve tried to look at the whole picture from how our product is installed so that it is accessible to how we can help playground owners to keep it accessible for years to come,” says Jeff Mrakovich, R&D, Certification & Services Manager for Zeager Surfacing Products. “Most playground owners don’t realize that if they take the time up front to install the surface correctly by raking level, wetting, and compacting it 6 inches at a time, will actually save them from having to top off in the near future and keep a firm, stable surface from the start.”

It’s clear when talking with inclusion advocates, designers, and manufacturers that we have come a long way in making today’s public playgrounds more accessible to children with disabilities. But like children on the playground, we have much more opportunity to grow by improving the existing standards. Most model building codes are updated and reissued every 3-5 years to incorporate research discovery and technology improvements. However, rulemaking under the ADA is a little different. The Access Board first has to issue its rulemaking as guidelines. Their guidelines then become enforceable standards after they are adopted by the U.S. Department of Justice as a revision to the ADA. The revisions to incorporate recreation facilities into the ADA took more than 15 years. Therefore, it isn’t likely updates to the playground provisions will be made any time soon. Both ASTM playground committees, F15.29 Playground Equipment for Public Use and F08.63 Playground Surfacing Systems, have added “accessibility” to their scope over the last 10-15 years. We’ll have to wait and see whether ASTM committees drive the future of accessibility standards development to continue to improve access for children and parents with disabilities or if it will be left to the Access Board and DOJ.