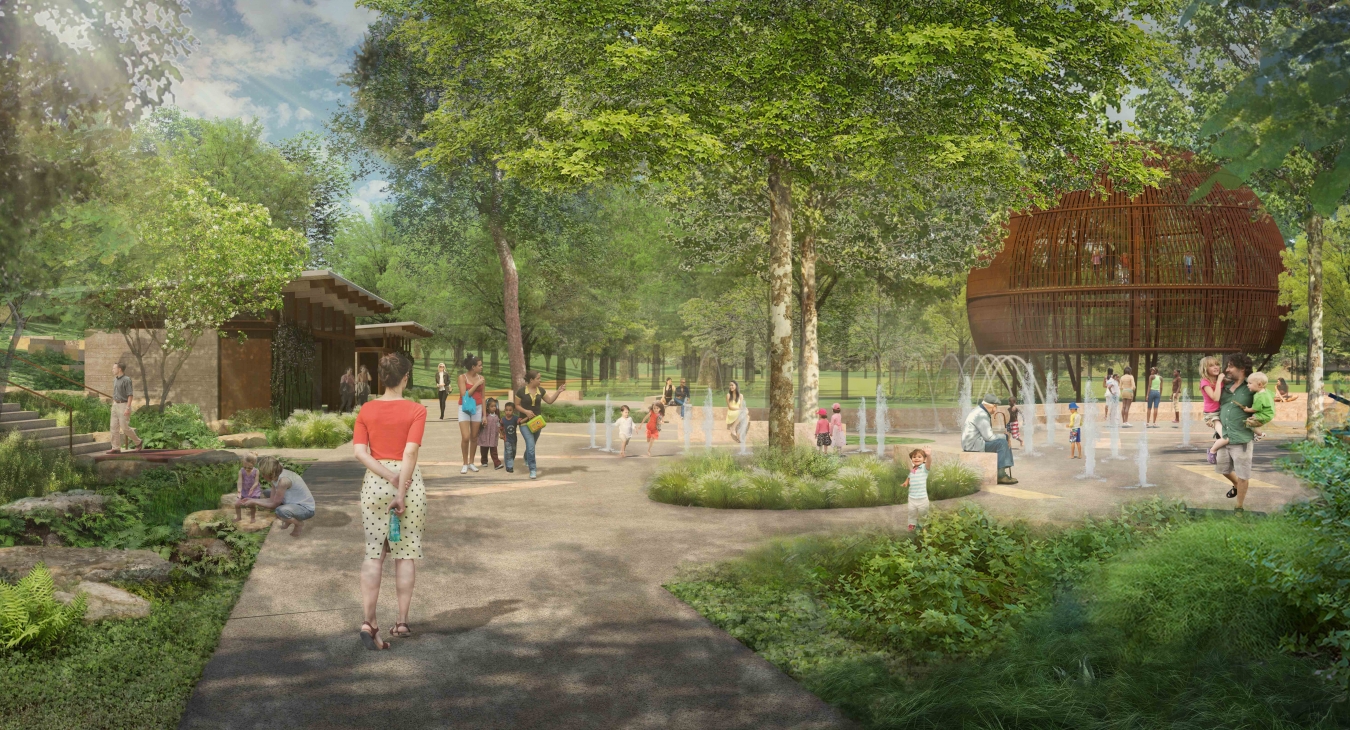 In Austin, Texas, Pease Park is one of the city’s oldest parks, spanning 84 acres in the heart of the city. The natural greenspace runs along Lamar Boulevard and the Shoal Creek Greenbelt and serves as a shaded and lush oasis for residents and visitors alike to enjoy for picnics, nature walks, recreation and general enjoyment and exploration of the outdoors.

This beloved greenspace and civic landmark have been protected for over a decade by Pease Park Conservancy. In 2008, the group was formed (originally as Trees for Pease) by a group of concerned neighbors who saw the park declining and decided to band together to ensure that the park remains one of Austin’s greatest treasures.

On November 1st, Pease Park Conservancy celebrated 10-years of preserving Pease Park at the organization’s 10th annual fall fundraising event, the first they have held in Pease Park. The event, “Past, Present, Pease,” brought hundreds of guests together to celebrate the Conservancy’s work and to get a sneak peek of the future of one of Austin’s most iconic greenspaces.

At the event, the Conservancy provided guests with an exclusive look at new design plans for the southernmost 13-acres of the park, commonly known as Kingsbury Commons, as envisioned by the prominent Austin-based landscape architecture firm,  Ten Eyck Landscape Architects, Inc. (TELA). The Pease Park Conservancy and TELA teams are working together with the City of Austin Parks and Recreation Department on the designs, which will restore and enhance the park to better serve the needs of parkgoers and to create an activated hub of play and community.

The plans for Kingsbury Commons channel its place as the recreational heart and cultural soul of Pease Park and aims to enrich the area by infusing it with more opportunities for play, fitness, activity, and connections among people of all ages. Preserving the natural feel of the park is a key part of the mission of Pease Park Conservancy and of Ten Eyck’s plans for Kingsbury Commons, which will feature the use of indigenous and sustainable materials throughout the project.

One of the larger additions to Kingsbury Commons is an innovative recreational play pod or “treehouse” in the park, designed by Mell Lawrence Architects and inspired by the trees and native species of the park.

Another awesome addition to Kingsbury Commons is a new children’s play section that will feature dedicated age-specific play areas for preschoolers and young children that may also include nature-based playscapes - like stumps and wooden beams for climbing, with a new set of swing sets and slides. To help parkgoers cool off during the hot Texas summers, the restored Kingsbury Commons will also feature a new state-of-the-art waterplay feature and splash pad with arcing and pop water jets.

For a sportier park experience, guests can also play a game of basketball or volleyball on the new and improved Kingsbury Commons basketball and volleyball courts, and the area will feature additional bike racks to facilitate alternative modes of transportation to the park.

Moments for peace and relaxation will also be a part of Ten Eyck’s plans for Kingsbury Commons, with the addition of new benches and the restoration of the historic picnic tables in the area. Pease Park Conservancy is honored to have the Ten Eyck Landscape Architecture team leading this project, and they cannot wait for the public to continue to love and visit one of Texas’ oldest and most beloved parks.

The proposed improvements to Kingsbury Commons are made possible in part by the transformative $9.7 million gift from the Moody Foundation in October 2017, and by continued contributions from the community. To learn more about Pease Park Conservancy, and the plans for Kingsbury Commons, visit  www.peasepark.org.