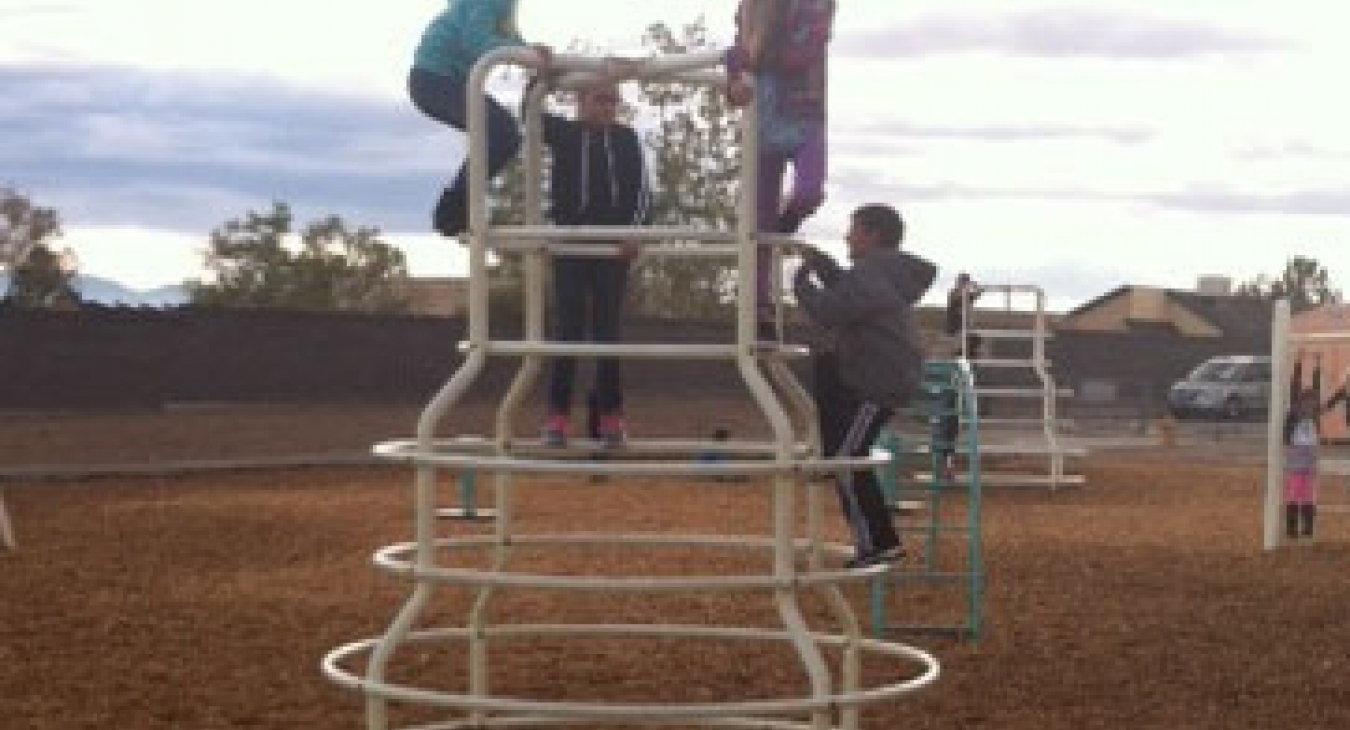 Our profession works very hard to make playgrounds safe, enjoyable places for children to grow. To bring in the New Year, I have asked an outstanding team of teachers and students to tell us about their very special game and experiences on the playground at their school. They did a great job and I would like to thank them very much.

The Game of Dead Mummy

The Eagle’s Nest is a dome shaped climbing structure (GameTime’s Mountain Climber). All of the horizontal bars form circles. At the bottom of the structure they are larger in diameter than at the top of the structure. There is room to play in the center of the structure as well. The ground cover of the play area is wood chips (Engineered Wood Fiber).

This is no ordinary tag game because the dead mummy must climb and tag with his or her eyes closed. That’s only the beginning of the rules. There are many rules, which allow up to five players to face challenges and experience science. If more than five players are involved, it gets too crowded to move around the structure.

New players have a couple of details explained before they start. They may also watch an example round. They truly learn by trial and error.

The mummy has to listen to sounds and feel how the poles vibrate to find players to tag. Other key sounds to listen for are wood chips from falling shoes, talking, whispering, and shoes squeaking. All these sound waves and vibrations lead the mummy to find a replacement.

One of the surprising things about this creative game is that it all gets played in less than 15 minutes and has many variations. If the dead mummy game gets tiring, students talk about how the Eagle’s Nest reminds them of the center of the earth because it starts with little circles at the top, which remind them of the Earth’s core. The circles get bigger and bigger like the layers of the earth. Then you have the beginning of a new game created by nine and ten year-olds.

I think we are getting it right! Please use this month’s column to remember why you do what you do and to help keep you motivated when issues arise. We all work hard, but can you ask for a better reason than children like these? The PlaySafe, LLC Family would like to wish you a happy and healthy new year.

I love this article it is

I love this article it is really accurate, and I would know because I was in the picture at the top and was in Mrs.sanchez's and Ms. Noel's class for 4th grade.

Unfortunately, IPEMA, U.S. CPSC, ASTM and other agencies appear to have stuck their collective heads somewhere when it comes to playground fall safety. Why else would they choose to ignore over 14-year-old data from the VERY SAME National Highway Traffic Safety Administration (NHTSA) whose crash test data was used to establish playground fall safety standards. When the March 2000 NHTSA Report stated 1000 HIC is unsafe, 700 HIC is the threshold for likely permanent disability or death for ages 6 to adult, 570 HIC for ages 4-5, and 390 HIC for ages 1-3, it proves the playground industry may care more about profits than safety for our kids. In addition, monolithic or unitary surfaces are dreadful when it comes to impact attenuation, inasmuch that they return the collected kinetic energy from the point of compression impact toward the child while they're still falling in a downward motion, thereby creating much more horrific injuries.