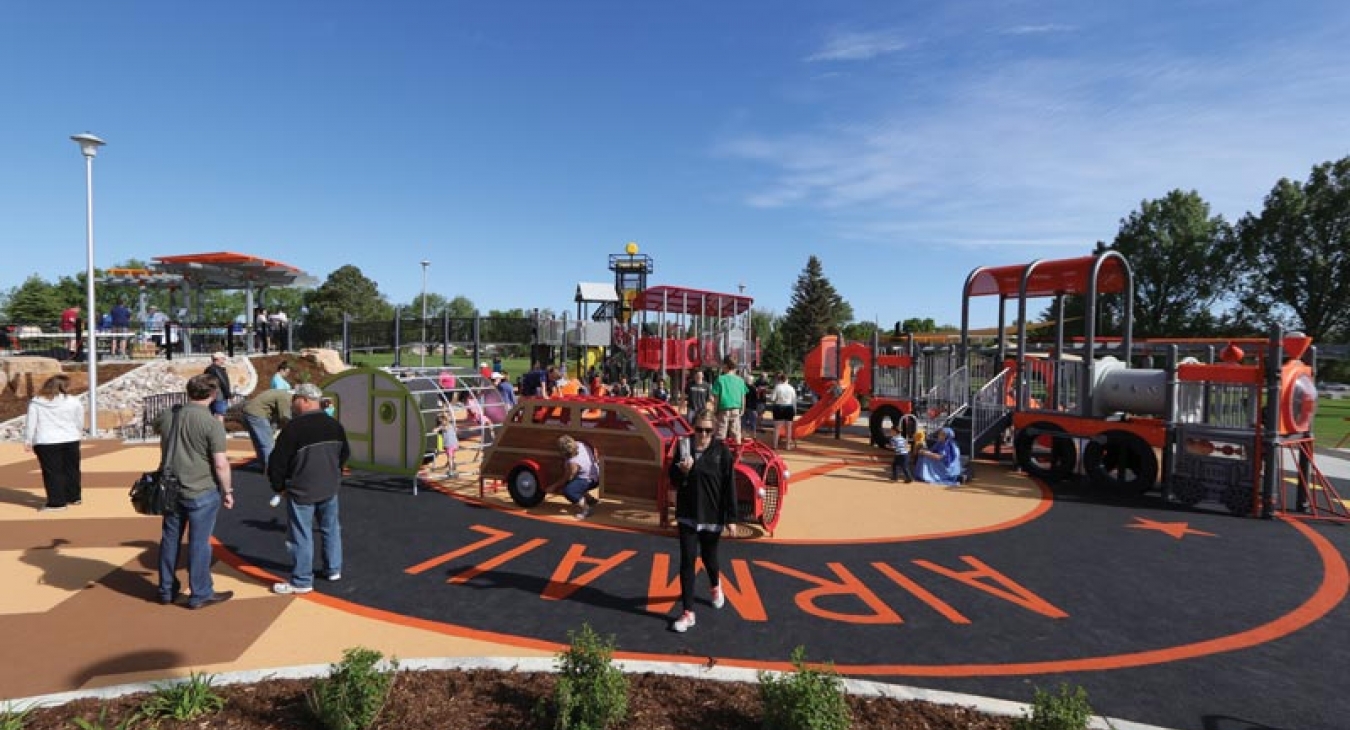 The unrelenting fundraising efforts of the citizens of Cheyenne, Wyoming paid off big with a beautiful all-inclusive playground designed to be enjoyed by play enthusiasts of all ages and abilities. The official opening of Cahill Park Friendship Playground on June 10, 2017 culminated years of dreaming, planning, and fundraising by community members that included city leaders, local businesses and organizations, and schoolchildren.

The Cheyenne Parks and Recreation Department along with the Mayor’s Council for People with Disabilities had been working for several years to provide an inclusive playground to the citizens of Cheyenne, and in 2011 the ball got rolling with the first seed money obtained from a grant from the Cheyenne Community Public Recreation District. The city contributed $200,000 for the playground that was primarily used for the cost of design and engineering and related upfront costs.
The fundraising campaign for the new playground began in 2015 when the City of Cheyenne partnered with local volunteers to form the Friendship Playground Fund. The mission of the Friendship Playground Fund was to privately raise funds to match and enhance grant monies awarded to the City of Cheyenne for the playground project. The Kiwanis Club with its nonprofit tax-exempt status served as the fund’s fiscal sponsor to properly collect donations and transfer them to the city. Building playgrounds has long been a focus of Kiwanis International.

A committee of key people who were committed to seeing the project through to the end was vital for success. Teresa Moore, City Parks and Recreation planner, and Monica Puente, volunteer chairwoman of the Friendship Playground Fund, were two of the dedicated people who worked tirelessly for two years to see the playground successfully completed. They were able to keep the vision of providing facilities in Cheyenne that were designed for able-bodied and differently-abled people alike. 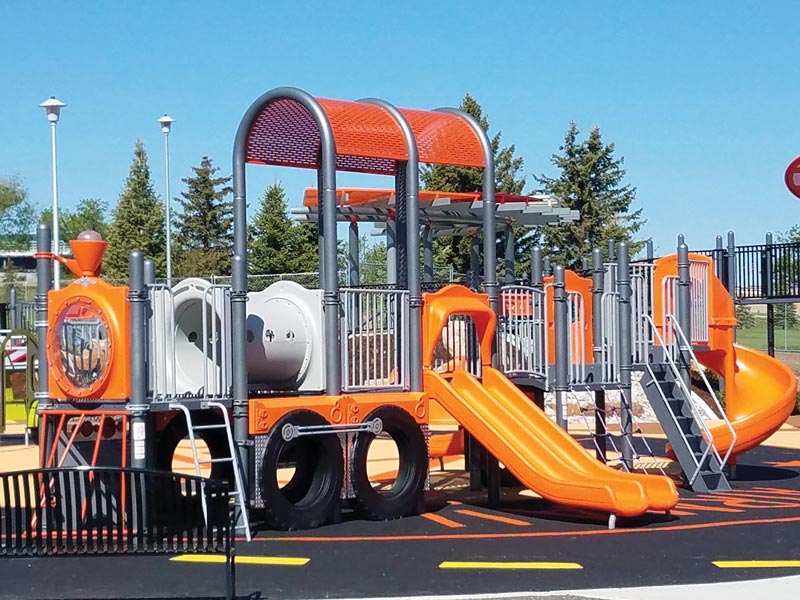 Cahill Park, located at Dell Range Boulevard and Friendship Circle, was selected as the site for the new playground. The park is centrally located, and it already contained parking lots and restrooms that met the Americans with Disabilities Act accessibility requirements. Before the playground was completed at Cahill Park, the closest inclusive playground was nearly 50 miles away in Fort Collins, Colorado.

The fundraising efforts became a public/private partnership. No tax initiative was necessary. The Cheyenne Community Public Recreation District awarded three $140,000 grants to the project. The City of Cheyenne received a $65,000 grant from the U.S. Department of Interior from the Land and Water Conservation Fund, designated to purchase playground equipment. The Rotary Club of Cheyenne also secured grant funding from the local club foundation and a matching Rotary District Grant.  Local service clubs played an instrumental role in not only project fundraising but in advocacy.

The local newspaper, Wyoming Tribune Eagle, promoted the playground with frequent articles updating the progress of the fundraising efforts. Having the support of the local radio stations and newspapers increased the excitement of the project and kept it in the minds of the community. As donors were recognized, matching fund challenges were made, and fundraising events were announced, the media had a big part in promoting the fundraising campaign. A Facebook page for the Friendship Playground Fund dedicated to the project also kept the community informed and involved. 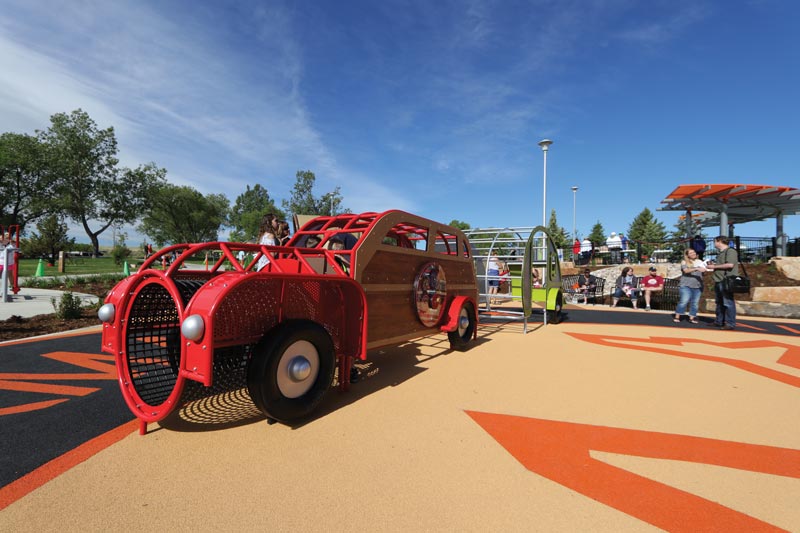 Donations from corporate sponsors and private individuals included challenges to match funds raised by the Friendship Playground Fund. Fun runs were held, a GoFundMe page was set up, and for the final push to meet the need, collection jars were put in local businesses and school children raised money in a penny war fundraiser between grade levels. A final $100,000 matching grant was secured by the Cheyenne Sunrise Lions Club from Lions Club International, and civic groups, churches, veterans’ groups, the Chamber of Commerce, the Downtown Development Authority, and many others who had not previously contributed rose to the challenge to meet the matching grant amount.

DHM Design, a landscape architecture firm hired by the city, called for designs for the play equipment to be submitted. The theme for the new playground was proposed to highlight Cheyenne’s transportation history from covered wagon to rail to highway to aviation. Designs were submitted in March 2016 and the contract was awarded in April 2016 to Recreation Plus Ltd. The equipment was ordered from Little Tikes Commercial in October with several pieces of equipment custom-designed including the airplane, control tower, and covered wagon. A vintage car and trailer were ordered from Landscape Structures. Reiman Corp. was awarded the construction contract. 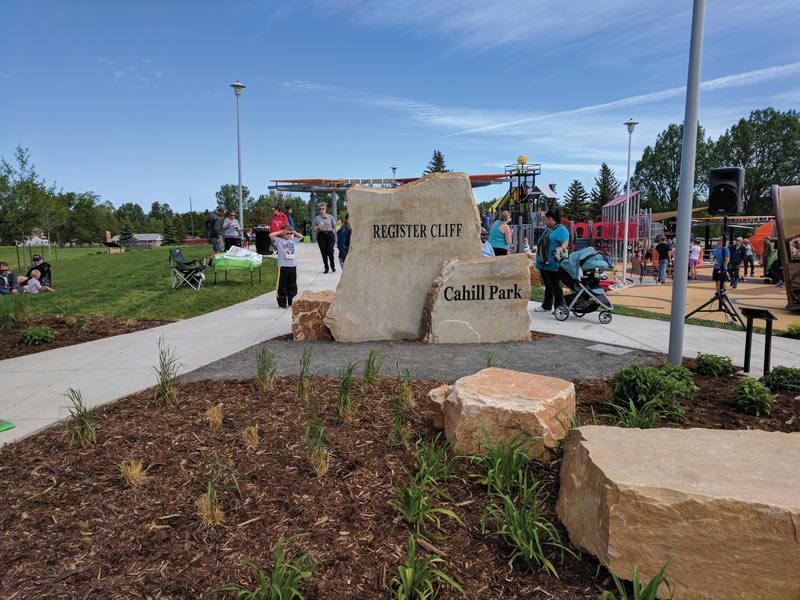 The groundbreaking celebration was set for October 26, 2016, with all but $300,000 of the $1.3 million raised. The final funds needed were for additional features to be added to the playground, which included several adult fitness pods, an outdoor classroom with rocks and shade, and a looping crushed-rock pathway furnished with education kiosks that feature Cheyenne’s transportation history. Wanting to have all of the construction of the playground completed at one time, the fundraising efforts by the volunteers during the final months before the actual construction of the playground would begin in January 2017 were unflinching as they made their final push. To keep the construction workers on the job, the City of Cheyenne fronted the necessary money to continue the progress of the build. The final fundraising efforts were able to put the money back into the Parks and Recreation coffers. 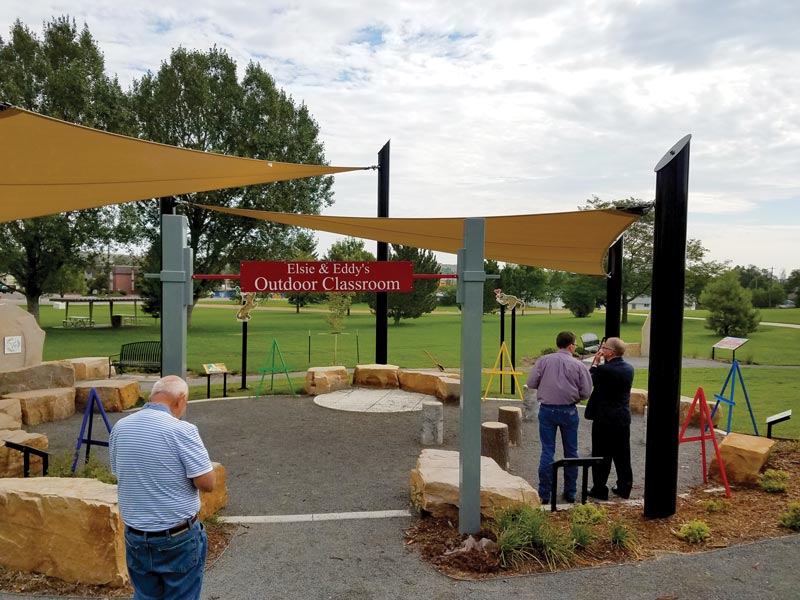 Monica Puente was quoted as saying: “This playground has just become a community-wide endeavor. It has touched almost the full community, and donations have come in from just such a wide variety of donors. Everyone will be able to look at the facility with pride and joy, knowing this was a gift to the community by the community.”