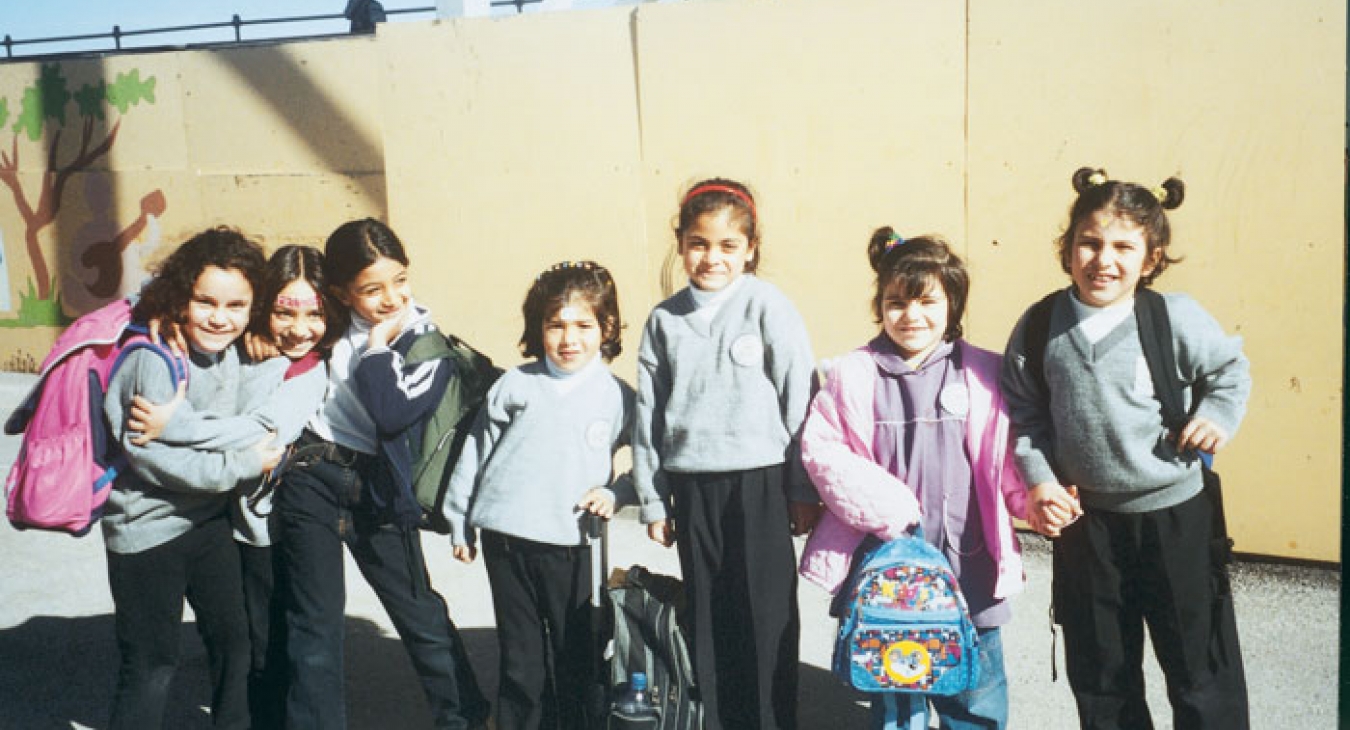 Most Americans know the little town of Bethlehem as the birthplace of Jesus. But for the children who live there, it is a high stakes battleground. Most of these children have spent the last two years under constant curfew. They’ve seen their schools and recreational areas destroyed before their very eyes. Playgrounds as we know them are a distant dream…but not for long.

This year, one person decided she would try to make a difference for the innocent victims of a conflict they can never understand. 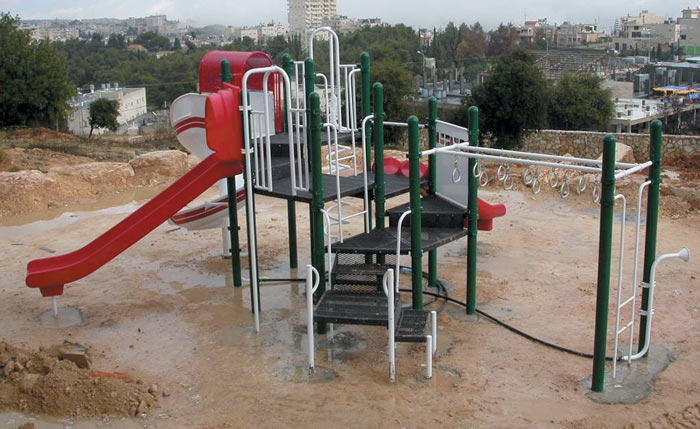 Thanks to the dream of human rights activist Susan Abulhawa and the support of American Playground Corporation, a brand new, state-of-the-art playground arrived on the grounds of the Evangelical Lutheran Church in Bethlehem.

While playgrounds are a normal part of park and school landscapes in most parts of the world, in occupied territory they are a rarity…or in ruin.

That’s what inspired Abulhawa to create her international foundation, Playgrounds for Palestine, Inc. (PfP) as a network for raising the funds, purchasing playgrounds and establishing sites where children can once again be children.

While Abulhawa worked with fellow activists and organizations like American Near East Refugee Aid (ANERA) to obtain the necessary government clearances, her associate, Mark Miller, looked to establish a relationship with a supplier who would be sympathetic to PfP’s mission. That’s where American Playground Corporation president Phil Abookire stepped in. American Playground agreed to provide the first playground to PfP, taking the first step in what Abulhawa hopes to be the future of PfP. In making the contribution, Abookire said, “While we are obviously concerned about the political implications of getting involved in this dispute, we decided that the children should not have to suffer. We would do the same for any other worthy cause. Our contribution here is not a choosing of sides, but just a way of helping underprivileged children.” 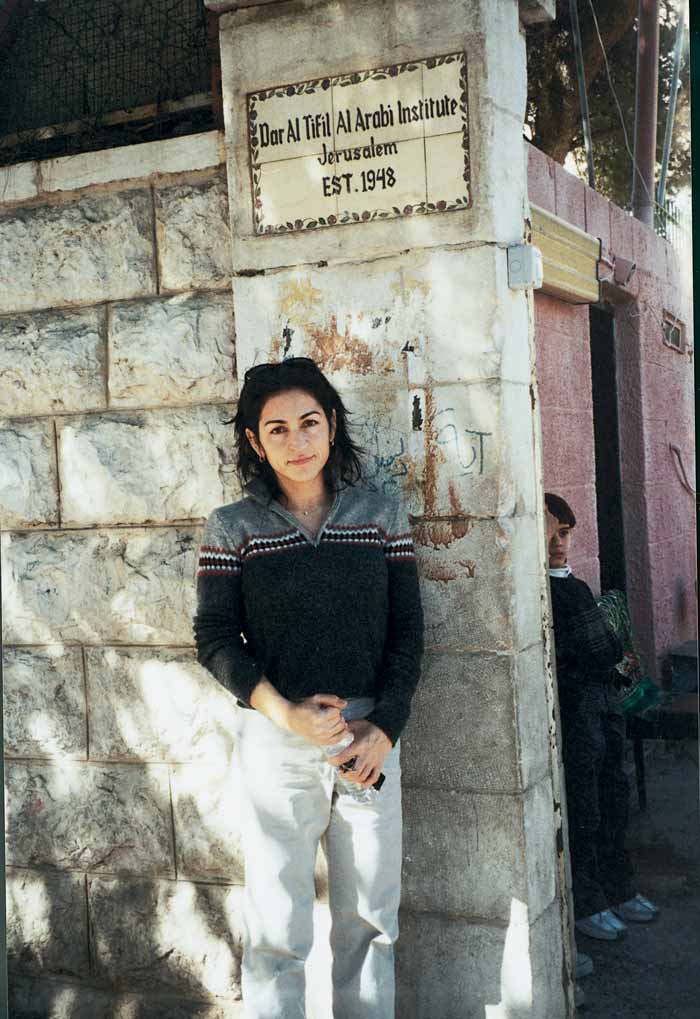 PfP selected Bethlehem for the first site after meeting Rev. Dr. Mitri Raheb, pastor of the church and the director of International Center of Bethlehem. Then Abulhawa put her organization to work.

After nearly nine months of navigating red tape just to allow the playground to reach its destination, everything was in place to install the playground in hopes of making this past Christmas a memorable one for the children. Unfortunately, as the January edition of Today’s Playground was going to press, PfP hit another roadblock. The Israeli army, citing new terrorist threats, kept the not-so-little town of Bethlehem under tight lockdown. Strictly imposed curfews meant Christmas was canceled in the Holyland, and PfP stood by helplessly as their hopes for delivering a playground for Christmas disappeared.

Abulhawa was down, but not out…not by any means.

PfP kept the dream of bringing a playground to the children of Bethlehem alive, and thanks to hard work, persistence, and lots of patience, the group successfully broke ground on the new playground on January 9.

Without the use of heavy machinery, volunteer workers reared picks and shovels and began installing the new playground.

“For this project, we helped arrange the shipping and provided technical support for the installation, which was done by a group of volunteers,” said Abookire. “While considerable assembly was required, the work was not difficult. We figured the assembly should take the volunteer group about 3 days to complete.” 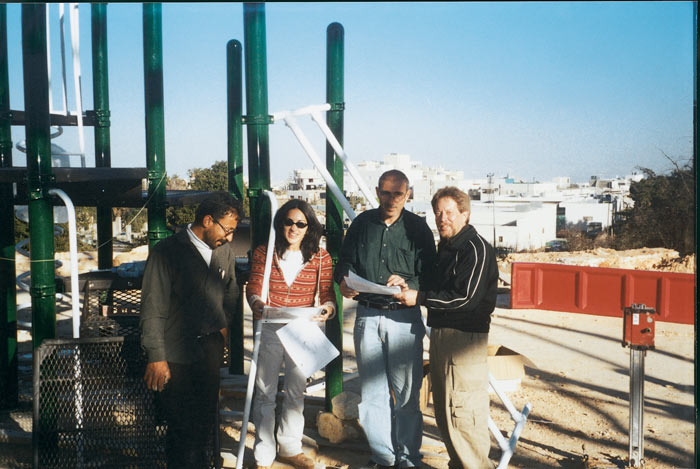 But due to tight Israeli restrictions on movement, after six days in Bethlehem, Abulhawa and Miller returned on January 13—before the playground installation was complete. In their absence, workers continued assembling the playground, which they completed right before reimposition of the curfew.

Designed to accommodate about 35 children, the new play structure consists of nine decks, three slides, one play panel, four climbing events, and one overhead exercise event. The playground is one of American Playground’s best, featuring their trademarked one-piece aluminum spiral slide. Even the colors have been custom blended to match the red, white, green and black of the Palestinian flag.

For the children of Bethlehem, the playground is more than a means of enjoyment; it’s a lifeline to childhood and some measure of normalcy. For the past two years, these children have seen untold death and tragedy and unspeakable destruction. Children’s rights organizations have reported an unprecedented incidence of posttraumatic stress syndrome among the youth, and the UN warned of staggering levels of malnutrition due to the severe closures and near halting of the economy.

American Playground hopes to continue its involvement with PfP through an agreement to provide additional equipment at a specially negotiated rate, which will enable PfP and its partners to meet its goal of installing eleven more playgrounds by the end of 2004.

PfP is also looking at expanding its initiatives to include other recreations.

For now, PfP, ANERA, and American Playground Corporation are glad to see the playground operational for the New Year; another step in what many hope will be the path to peace.

One playground will not bring peace nor will it change the dire economic situation of the region, but for a few children, who’ve never seen a real playground—like the ones American children take for granted every day—it will mark a whole new world.