Bentley’s Playground Phase 2 officially opened Saturday, June 24, 2017. The universally accessible play area at Keokuk, Iowa’s Tolmie Park was dedicated before a crowd of volunteers, donors and local families. Bentley and several other children lined up with their parents for a ribbon cutting ceremony during the program. A moment that was eagerly anticipated for the past 2 years as the Keokuk community pulled together to conduct grass-roots fundraisers.

Bentley’s Playground is named in honor of Bentley McGhghy, who has cerebral palsy. The driving force behind the project is a 501(c)(3) non-profit organization, K-Play, which was formed to raise philanthropic funds for the $300,000 project. They hope to continue their mission and develop more inclusive play spaces in the future. 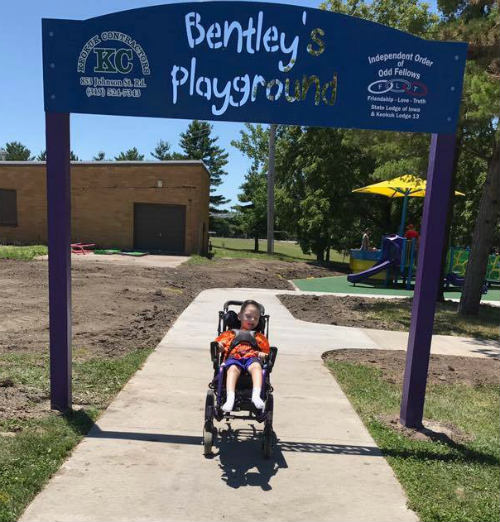 Phase 1 was completed in June 2015 and included an inclusive swing area and music play station. Phase 2 was a much larger undertaking, and features two parallel zip lines, an adaptive merry-go-round, a saucer swing, a multi-level play structure and additional music and sound play components all manufactured by GameTime, a leader in the Inclusive Play movement.

The play equipment was completed by a volunteer playground build in May. McGhghy named Keokuk High School student Tyler Stephenson as the K-Play Volunteer of the Year. Stephenson, who was unable to attend the dedication program, worked from 9 a.m. until everyone else had left all four days of the community build event.

The International Order of Odd Fellows Grand Lodge of Iowa was the largest donor to the project, with contributions totaling over $100,000. Hy-Vee was also a major fundraiser as well and agreed to host a “round-up” Cause Marketing campaign at their local Keokuk location.  K-Play board worked very closely with Play 4 ALL Community Resource Director, Victoria Schmitt Babb, to champion this project across the finish line.   Victoria helped to identify potential funders and developed strategies and tools to help with the fund development process. She also worked closely with K-Play grant writer, based in St. Louis, MO, who devoted her time to write grants on a continual basis.

“When they say it takes a village, that’s exactly what it takes to successfully complete a large inclusive playground project build. It took the whole Keokuk community,” says Babb.