Do You Hear What the Children Hear? 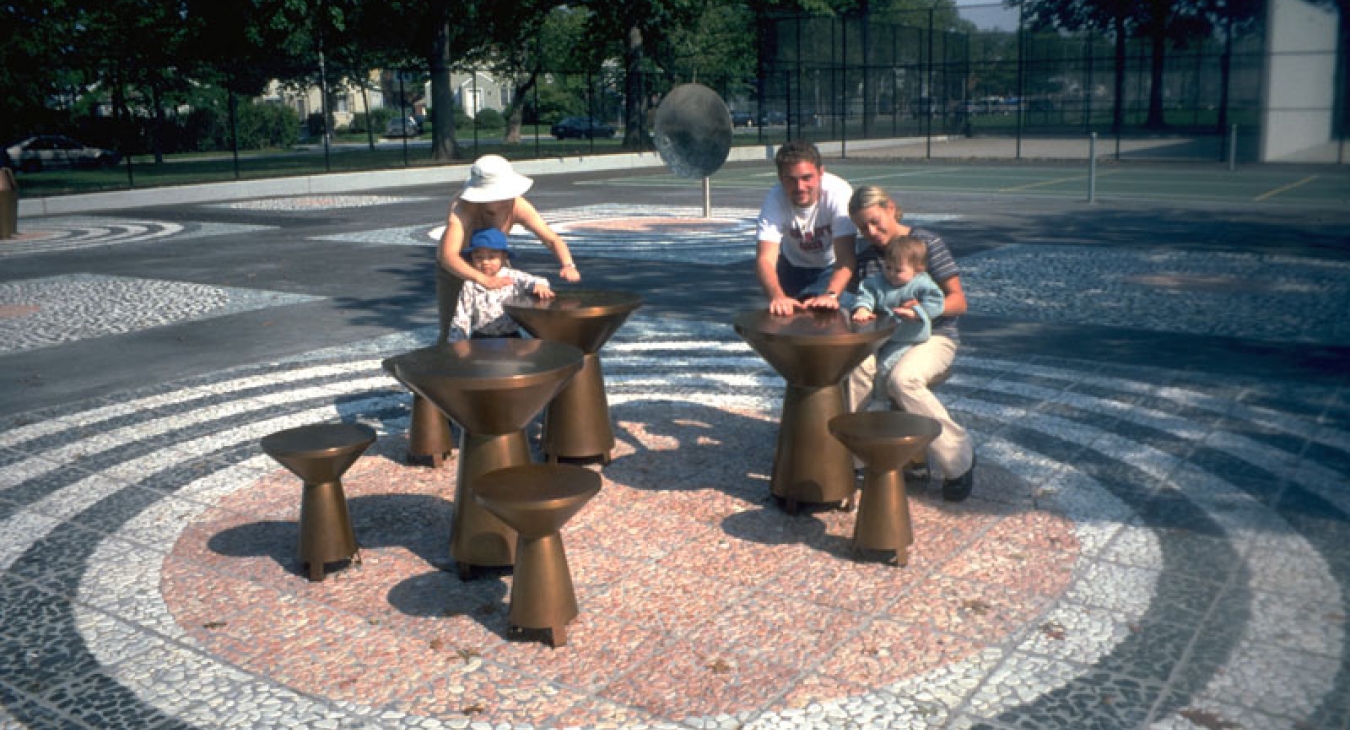 The art of play with sound gardens

They are happening around the nation and are music to your play. Sound gardens, or sound playgrounds, are chiming in and bringing a whole new dimension to play. Bill and Mary Buchen have collaborated in the creation of these innovative playgrounds that combine sonic and visual arts and create a synergy of art and play. They have been working with these since 1972 and have traveled the world researching sonic phenomena and making field recordings.

Washington Avenue/East 182nd Street & Fordham Road in New York City took two years to complete and was created by Paul Warcket and associated with the Percent for Art program. The sonic sculptures created by the Buchens have been exhibited nationwide and encourage active exploration of sight and sound together. In 1996 they completed a permanent public artwork for the New York City schools called Sound Carnival. You’ll also find their work at Socrates Sculpture Park in Queens. Were there one organized, you could take quite a tour of their work throughout the United States, including other sound parks and wind harp installations.

These playgrounds are especially nice for differently-abled children who might be visually impaired. The sensory experience is invaluable and aids in development for all. Universally accessible play spaces can be a great place to install a sound garden.

In addition to this, these play spaces are just plain fun. How great is it to make your own music? You may or may not have heard of the group Stomp. These individuals perform musical numbers with non-traditional instruments combining sounds we may not normally think of as music. As they do this, they add their own rhythm and touch to the sounds, turning them into pieces that invite the listener to create their own music.

Sound gardens can have that same effect and compel children to create as they make their own music on these unusual pieces. What a great way to encourage creativity, all the while developing the senses.

Sound Garden at P.S. 23 was created for use during recess and includes bronze table/sculptures, modeled after Chinese and Burmese frog drums, and stools created with a North African Islamic drum in mind. These provide seating in addition to being a great instrumental ensemble. Close by you’ll find a sculpted concrete bench embedded with various sizes of pipes, pipes which tap into a hollow space within the structure. Children are able to whisper messages to each other through these.

The Parabolic bench lets children explore how sounds bounce back and forth between two large metal disks. The Echo Chamber uses the architecture of the site as the 40-foot wide underground tank collects excess rainwater and creates a cavernous sound-board.  Big Eyes/Big Ears gives children a giant’s perspective through a periscope that looks to the playground. The sound is activated by the child in each part of the play area and explored physically as well. Sound Garden also sits up on a hill right above the school, so you might imagine how the sound carries as the children make their own music.

Largely aware of the cultural content of the sound, the Buchens were prompted to promote changing the school’s carillon to sounds that seemed to be more relevant to the students. It used to play “Westminster” chimed on the hour, but carillon now offers bells based on a five-tone scale. These bells can also be programmed very easily and are more of a “sound mark” to be decided on and changed by the students and teachers whenever they like.

This play space is unique in every aspect right down to the concrete pavers, which were stamped with toy truck tracks in a fern-like design. Wind bell sounds define the perimeters of the play space and also block out ambient noise from sirens and traffic. All the materials were chosen for longevity to withstand extreme elements and years of rough play since all budding musicians don’t have the same touch when creating.