Child Socialization on the Playground 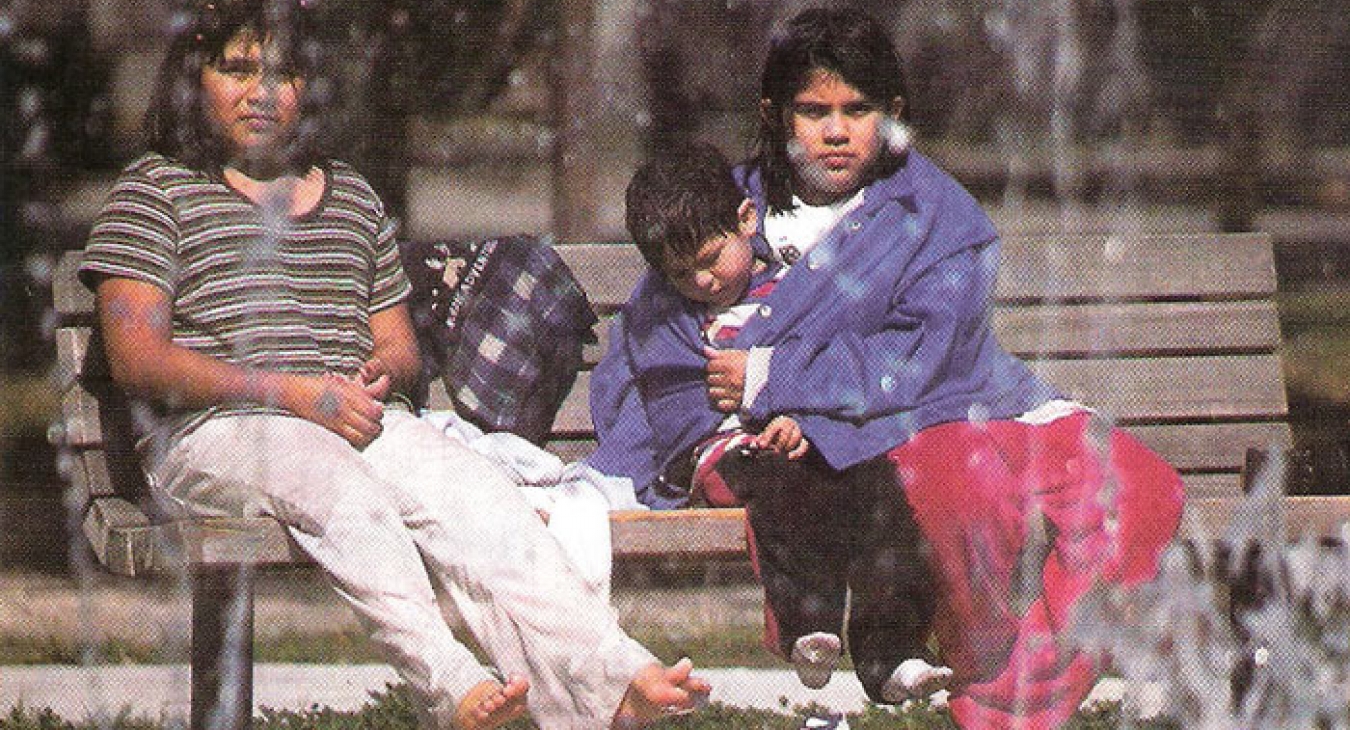 Creating an environment where kids can grow socially, as well as physically

The Board of the National Program for Playground Safety has taken the position that playgrounds are an environment for the facilitation of physical, emotional, social and intellectual development. But, what do these terms really mean? Most people take for granted that traditional playgrounds can improve a child's physical ability. But, very few have paid attention to the other three developmental areas. This article will explore one of those other three areas, namely the social skills and abilities that can be developed in the playground environment.

THE IMPORTANCE OF SOCIALIZATION

There are at least three observations that we would like to make to indicate that socialization and social skills are important and need to be taught. At the 2000 Congress of the National Recreation and Park Association, a survey was conducted of 50 of the attendees to ascertain whether or not playgrounds were still viable in the 21st century. Forty-eight of the surveys were usable. Those responding indicated that the No. 1 benefit of playgrounds for children was socialization. Social development was deemed to be the sixth most important benefit, followed by interactive play (8th). (Hudson and Thompson, 2001).

The second situation deals with the importance of responding to the Columbine crisis. If the social responsibility of the students had been different, perhaps the crisis could have been avoided. Bearing that in mind, it seems appropriate to consider ways that young children can learn positive social skills before tragedies of Columbine proportion occur. 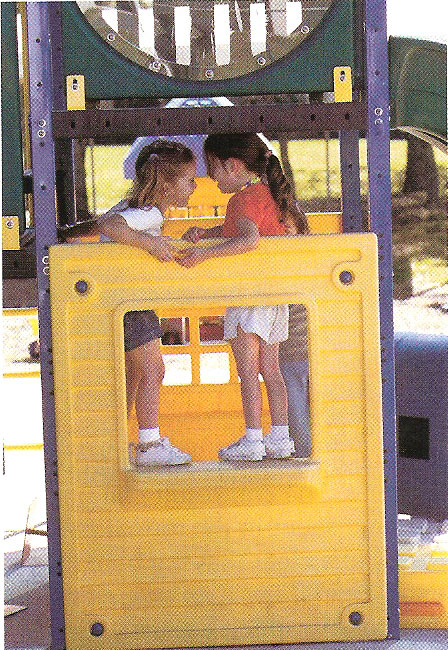 Third, studies about the development of children and their use of space were recently concluded in Canada by Anne Gillain Mauffette (1999) along with her mentor, Steen Esbensen. Among other things, Mauffette observed children's use of equipment in the outdoor setting and strongly supported the importance of the outdoor place as an area to develop social skills. Since all children spend time on playgrounds, th is appears to be a logical environment for these skills to be learned. What are the social skills that might be developed to benefit children?

Libby Oshiyama (1999) describes the ideal climate for schools in terms of the "four R's":

(1) Mutual Respect among all the school's constituents, (2) Reciprocity among students and between them and adults,  (3) Responsibility to self and the greater  community, and (4) a Reverence for place and its connections. Each of those elements seem like items about responsibility that could be taught on the playground. How might this occur?

In order to build the mutual respect for individuals, adults need to model respect for individuals on the playground. They need to value children's need to have free time and give them opportunities to develop their relationships with one another. In addition, they should encourage children to accept one another despite diversity of skills and abilities. Each child brings different skills to the environment and those need to be honed to fit group social situations. A team has many players and the team is stronger when children learn that a variety of skills and abilities can contribute to the overall success of the team. Children need to be given opportunities to grow and develop socially, to respect the likenesses and differences of other children. What better place than the playground for such skills to develop?

Think of the playground in this fashion. Some children have the abiIity to cross the horizontal ladder in a hand over hand manner. Others need to let one hand meet the hand that is ahead before stretching for the next bar. Some children will help others develop their skills and become more efficient users of the equipment. On swings, children need to learn to take turns. On slides, children need to learn to cooperate in sliding down and exiting so that all have a chance to experience the slide in a safe manner. 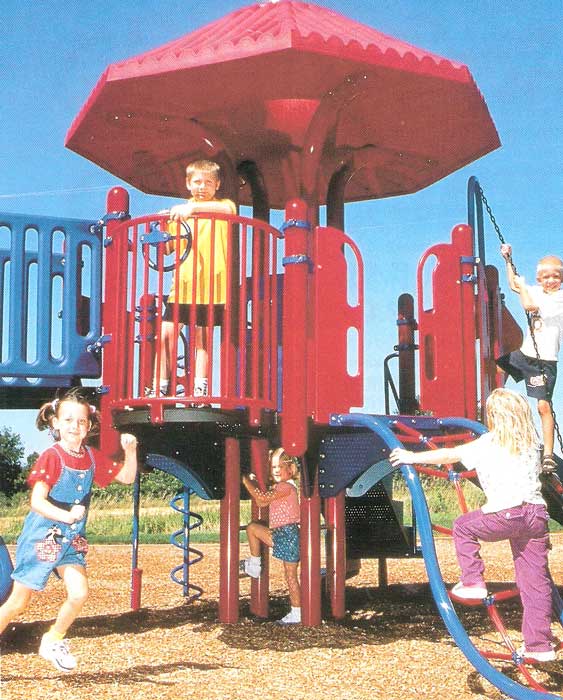 Bullying among children appears to have become more prevalent in recent years. The questions are why and what are the conditions that enhance bullying? On the playground, if children who are skillful are allowed to make fun of those who are not as skillful, then a lack of respect for individual differences will develop. Adults who are responsible for supervising children on the playground, need to watch for children who are being disrespectful of others. They need to teach them reciprocity.

Reciprocity is the practice of a mutual exchange of privileges. If children are given the privilege of being leaders in going to and from the playground, they also must learn to take the responsibility of being the last person in line. If they have the privilege of being the first in line to use a certain piece of equipment and are able to demonstrate its use, then they must be willing to be taught to use another piece by another child. This is an illustration where a child can learn reciprocity by leading in one instance and then respecting the rights of others to be in control and demonstrate in another situation. Such an exercise also gives children an opportunity to acquire patience. If one does not have to practice being patient, how can one learn to be patient with characteristics and abilities of others? Such an endeavor helps children practice give and take, and builds their ability to exchange privileges.

One of the ways to increase reciprocity among children and to reduce social inequity is to refrain from referring to children as being "at risk." Instead, adults need to think of all children as "children at promise." As Wade Boykin (1996) puts it, we need to identify and build on the cultural and personal strengths of individuals and accept nothing less than outstanding performance. This would be a pleasant change from concentrating on reformative measures and instead concentrate on pro-active instruction. On the playground this would mean that adults pay attention to known differences in social skills that children possess and in cultural ways that children express themselves. 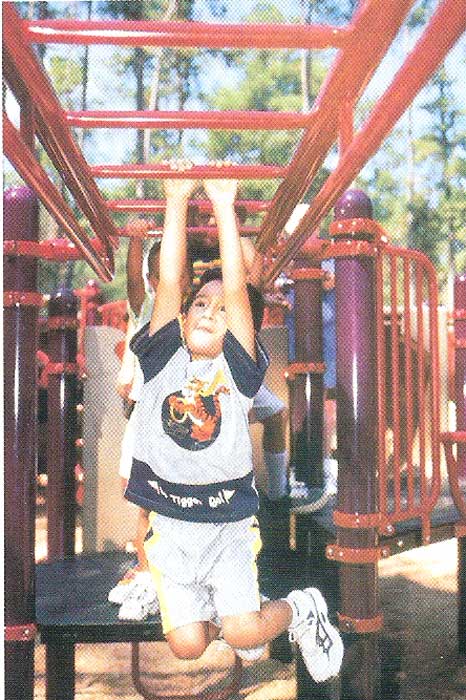 An example of this would be found in the activities of an organization called Kids at Hope (1999). This organization is dedicated to emphasizing the possibilities that children have rather than the deficiencies that might exist. The group clearly presents the opportunities for children and recognizes the strides that children make rather than noting errors that might be committed. For example, on the playground, when children are trying to proceed across the horizontal ladder, they are praised for making it to three bars which might be an increase in reaching two from the day before, rather than being chided for not getting across the whole string of bars to the other side. The Kids at Hope group has a whole series of suggestions to help adults be positive in the social development of children.

BUILD RESPONSIBILITY TO SELF

In the school setting, the use of the playground area can help children take a break from classroom learning. The end result can benefit the time spent in the formal classroom. It is clear that the human brain cannot learn an unlimited amount of explicit content. As Jensen (2000) has noted, you can pour all the water you want from a jug into a glass, but the glass can only hold so much. Movement can give learners a much-needed break. (Stevenson and Lee). Thus, children need that most important break called recess (Clements, 2000). The end resu It wi 11 be more rather than less productivity in the other more formal classroom.

BUILD REVERENCE FOR PLACE AND ITS CONNECTION

As one considers children having a reverence for place, one needs to remember the old Indian proverb that we are but caretakers of the land for future generations. Children need to learn that they are part of an interconnection with the past and the future. They can demonstrate this by respecting the playground and working to maintain it, not just for their use but for those who follow. For example, the surface at the bottom of slides and the surfacing under swings are the two places where the surfacing displaces most easily. Children can be taught to be socially responsible tor others by replacing the surfacing after using the equipment, before doing other things. This will make it safe for others to use the equipment and enjoy it. Children will contribute to the social gratification of others.

It should now be evident that playgrounds can contribute not only to the physical development of children but also to their social development. However, for this to occur proper planning needs to take place to ensure that the play environment is designed in a way that allows children to socialize. Thus, when creating a play environment some crucial questions must be answered. These include:

1. How will the design allow children cooperate with one another?

2. What features help children learn to work with one another?

4. How does the playground help the adults facilitate learning or socialization?

5, Does the playground enhance the possibility of socialization or is it detrimental to the development of that important idea?

By answering these questions through the design of the playground, one can go a long way to provide children with the means of enhancing their social skills and abilities through play.