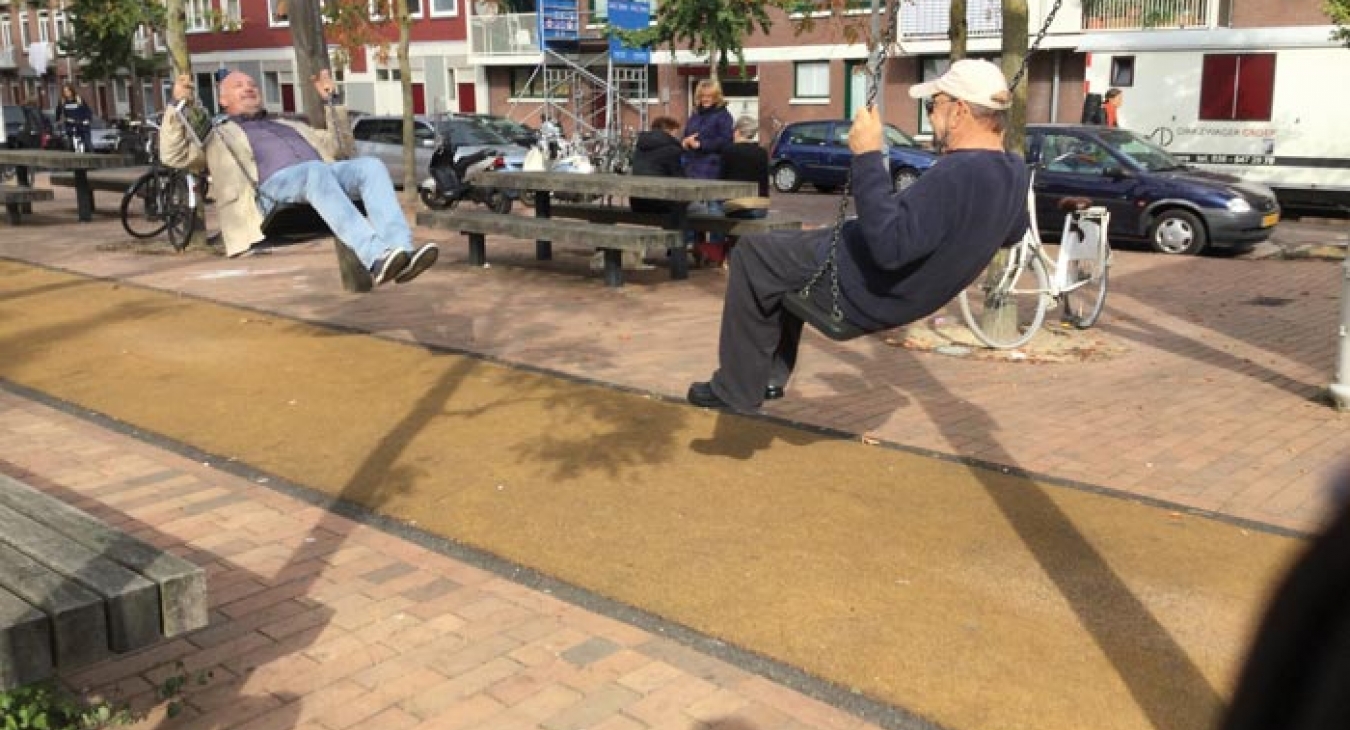 Frankly, it was almost too much for me to take in. There we were, in Holland, being given a tour by a friend I’d only met online: Gerard Mulder, who by the end of the tour became a best friend. We were on our way to a museum he thought we’d enjoy, and just happened to find these swings, and, because we are both people of a playful persuasion, found ourselves swinging, together.

The swings are connected to the same frame, and to each other via another cable, making what you might call a “double swing.” I’ll show you those in a few paragraphs.

We didn’t really have to sit facing each other, but something about the design invited just that. And so we did. And, facing each other, we got to see the expressions on each other’s faces. And a lot of the time, because it was all so new and so much fun, we saw each other laughing, which made us each laugh harder. Though, come to think of it, I’m sure if we had been there long enough, we would have tried every possible way of sitting on them – because they were just fun enough, just strange enough to invite that kind of exploration: the kind of exploration that makes something shared, something new, something unforgettable. The kind of shared exploration that makes friends.

While we were doing all this swinging, we were laughing. And when we weren’t laughing too hard, we were talking about how the Double Swing worked, wondering together about how we could get the swings to swing us higher together; wondering what would happen if we tried to change the rhythm, timing, balance between swinging towards and away. In other words, we were fully, delightfully engaged, not only in the exploration of the swings, but in the discovery of each other’s playfulness. Engaged in body, mind, and in the growing relationship between us.

If I were trying to describe the characteristics of what I thought might be the kind of playground device that could serve as an archetype for all playground devices, this would be exactly what I’d want, what I’d recommend, probably passionately. Because it invites cooperation, exploration, discovery, physical and interpersonal engagement.

I used the word invites because that really is the key to what makes it so relevant to play and playful interaction. Seesaws, for example, are cooperative, and they, like the Double Swing, allow us to see the various emotions of play flit across each other’s faces, but they don’t offer any viable alternative. To make a seesaw work, you basically have to cooperate. You can be mean, if you really need to, and jump off the seesaw just at the wrong time, wrong enough to really hurt the person at the other end. But that’s too clearly a violation. It’s not another way to play. It’s a way to break the game, and the body of the person you’re supposedly playing with.

I’m not trying just to make a case for more intelligent, creative, playful, enlightened uses of those liminal spaces that divide our homes and streets and neighborhoods and lives. What I’m also hoping to do here is invite you to think a bit differently about the place and function of playgrounds in our lives.

Here, finally, is the picture I promised you all those paragraphs ago. It gives you a slightly better perspective on the mechanism that makes the swings so fun. The cables that connect the swings are near the top, so the tug of one swing against the other can have just enough leverage to make each swing in the Double Swing swing significantly further, given the right timing. Given what you might think is the “wrong” timing, it transforms the obviously fascinating act of trying to help each other swing together into a more complex act of creating something like a jiggly, laughing dance together. 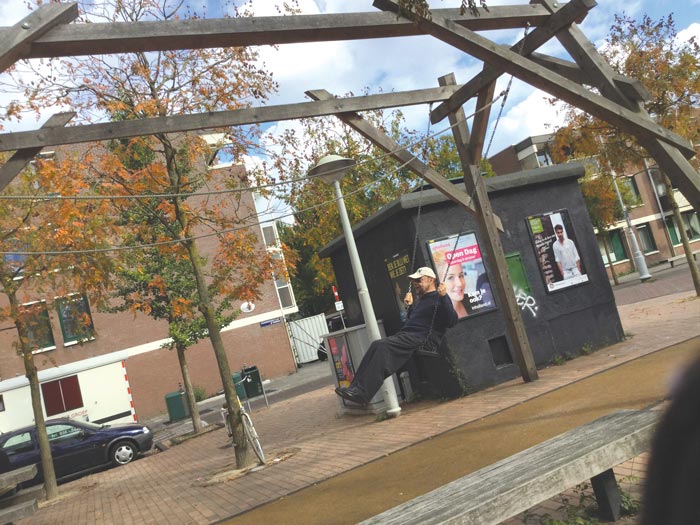 Such a simple idea, inviting genuinely shared exploration, resulting in deep and lasting fun and providing a platform for a deeper and more lasting friendship.

Before we leave the cooperative, explorative, inventive swing thing, there’s one more example that I need to show you. This one, unlike the Double Swing, but like most of the swings you find in public playgrounds, requires you to sit side-by-side. You can still see each other – at least you can see the people on either side of you – but you have to look. Otherwise, you find yourself engaging in what most observers of children’s play aptly call “parallel play.” Which is good. Because sometimes you need to play by yourself, among others.

Other than that, it’s not your typical swing thing at all. It’s actually an art installation called “21 Balançoires," and it’s musical. 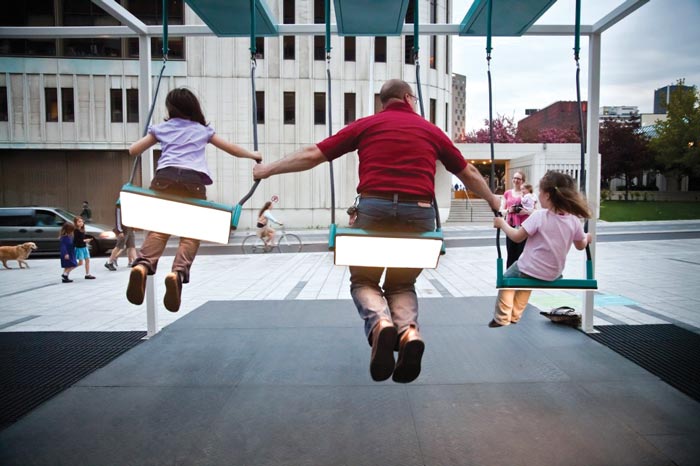 This musical swing set uses electronics. The electronics are used to make each swing produce a musical tone every time you swing, back or forth. For added artiness, the bottom of each swing is lit.

You really need to see this in action. Fortunately, there’s a video you can watch, and listen to. Maybe you might want to take a break from reading, and get closer to the sheer delight of the whole thing. [https://vimeo.com/40980676]

Like the Double Swing, 21 Balançoires is an invitation to cooperate, to explore, to play together. The music and light involve the other senses, and do so even more deeply as you continue to engage and share in the play experience.

High-tech or no-tech, the opportunity to explore and discover new ways to play is almost as central to what these swings offers as their cooperative aspect. As players find other ways to play on the swings, their experience together becomes unique, something new, that belongs solely to them. Because it’s theirs, and they’ve discovered its newness together, it becomes something that brings them closer together still; something special, bonding, unforgettable.

If I were trying to explain why I’ve devoted more than 45 years to exploring, teaching, writing about new ways to invite deeper, more social play, these swings could very well symbolize the one thing I most wanted to share with the world and you.

Always great to hear from Bernie. One good swing deserves another, The Unbearable Lightness of Swinging - http://bit.ly/16EoiQC

I'd loved your post.
I'm from the Netherlands and I have tried these swings myself (off course!). I'm a specialist in inclusive play. With the Speeltuinbende (the playground Tribe, www.speeltuinbende.nl) I test playgrounds.
We think these swings are great.
Unfortunately not for everyone. If you can't sit by yourself, you can't swing.
It'll be great if one of the swing seats was a seat for everyone.
But if that's not posible, their is a nice solution. It is cold www.theaswing.com Do you know it?
[email protected]