The Perks of Natural Turf 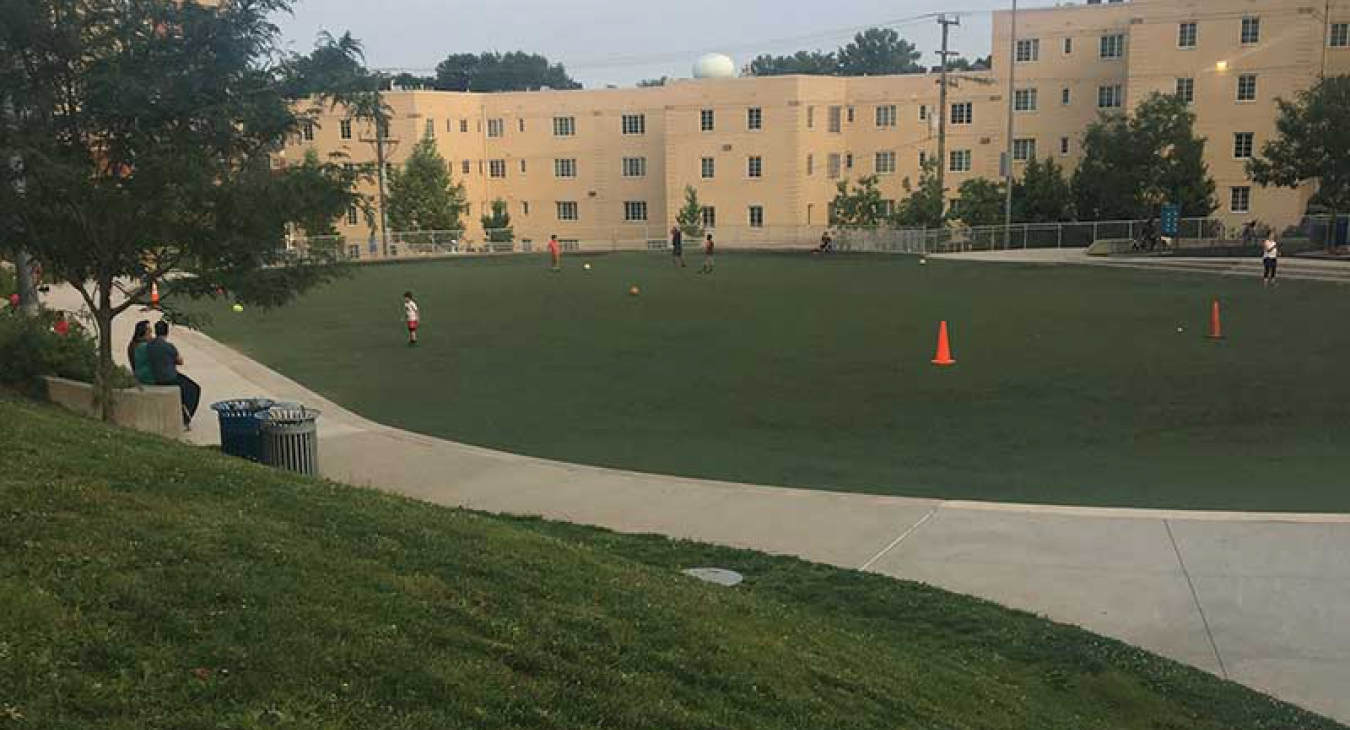 Playgrounds are an integral part of childhood. Who among us did not live for those trips to the park, to run around and roll in the grass, climb on the jungle gym, skim down a sliding board, or swing to our heart’s delight? Playgrounds naturally entice play and creativity. They are part of our community fabric, and in many instances, are the focal point of many neighborhood activities. While artificial turf use has increased with some athletic fields and school playgrounds, the National Turfgrass Federation (NTF), a non-profit group which coordinates turf research between public and private entities, believes natural turf still offers safety and environmental advantages that far outweigh benefits from synthetic surface varieties. Not to mention that it offers better protection against injury for those using playground facilities.

NTF’s contention is that natural turf is a better long-term investment, in terms of safety, general aesthetics, and environmental stewardship. Its natural benefits stem from an accepted need for natural greenspace. As for environmental benefits, look no further than natural turf’s reduction of “heat island” effects. This remains a major concern for playgrounds with artificial surfaces, especially in densely populated urban areas. Many of these synthetic surfaces use ground up rubber tires in place of natural soil, and “grass” that is a poor imitation of Mother Nature. Studies have shown that on a typical summer day, artificial turf surface temperatures can approach that of asphalt — amounting to as much as a 50-60 degree increase over natural grass surfaces! Conversely, natural turf offers cooler, softer surfaces for natural play, with less risk of skin burns or other injuries associated with harder, more chemical-based, playing surfaces. Several groups, including the California Environmental Protection Agency (CALEPA), are investigating the potential of children absorbing possible carcinogen and skin irritant compounds found in artificial turf systems. On the other hand, hardwood mulch, soil, and other natural grass surfaces alleviate such concerns. While injury and health data between playgrounds using artificial versus natural turf is limited, thus leading to no definitive conclusions on overall preference, the natural versus synthetic turf issue will remain in the forefront of playground safety, especially as communities call for more readily accessible play areas in public spaces.

Admittedly, playground use differs from athletic field use. However, recent studies also indicate that certain athletic events using artificial turf can increase the risk of lower leg injuries and knee injuries, especially if foot cleats catch in the carpet. Another concern is ‘rug’ burns that can cause significant open skin wounds that lead to infection. Natural grass surfaces afford more “flexible give,” thus making their surfaces less injury prone for its users. This is especially true for playgrounds, where children are blithely unaware of hidden dangers and do not wear added protective gear that older players use for athletic contests.

In terms of our environment, it is well known that playgrounds are often major components of natural ecosystems. Playgrounds using real turf can serve as filters that trap harmful pollutants through its dense network of roots and shoots. The soil beneath natural grass also captures many potential contaminants before they end up in groundwater systems — thereby considerably mitigating their harmful flow into our streams and waterways.

Meanwhile, NTF advocates for continued research dollars at the federal and state levels to create grasses that address public use needs in a variety of climates. This includes ongoing research creating improved grass types (“cultivars”) for playgrounds, athletic fields, and public parks. Scientists are currently working on more “traffic” and weather-hardy cultivars that will require fewer pesticides and less overall maintenance. The latter directly addresses the cost issue, which is a recurring budgetary concern for playground maintenance at schools and local municipalities.

Overall, NTF believes installing or retaining natural green surfaces provides the best return investment for playground users and managers.  More importantly, it provides children with safer playing environments, while enhancing their appreciation for the tactile feel of the natural world around them.

Kevin Morris has been Executive Director of the National Turfgrass Evaluation Program since 1998, and President of NTF since 2007. Jonathan Moore has been NTF’s policy consultant since 2015. For more information, please contact Kevin Morris at 301-504-5125.