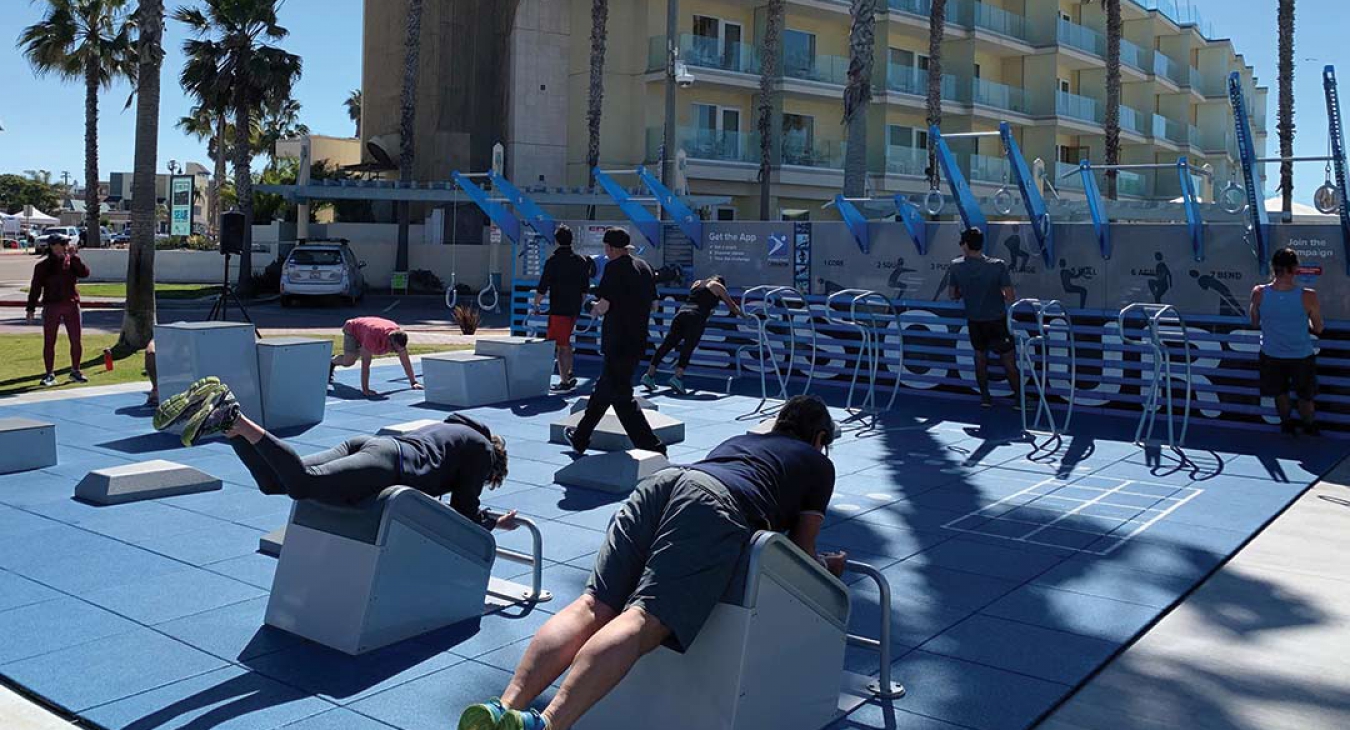 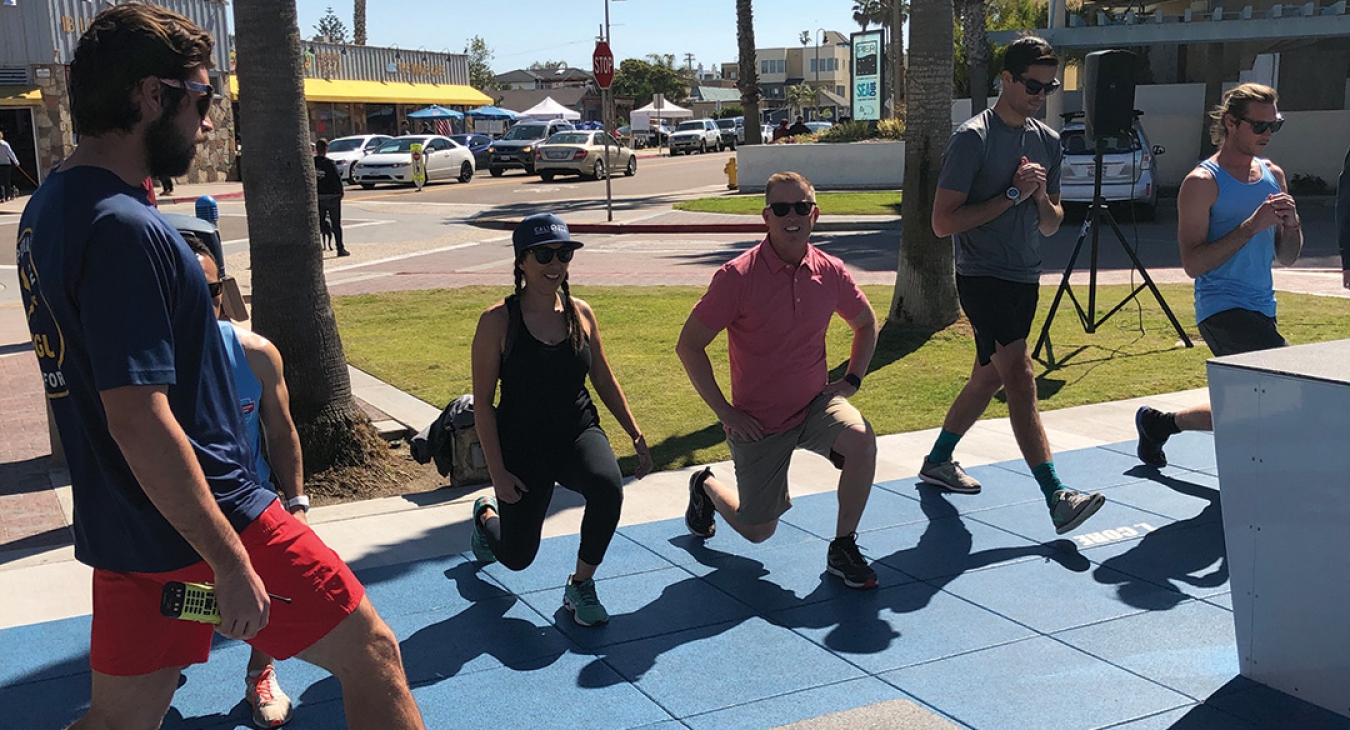 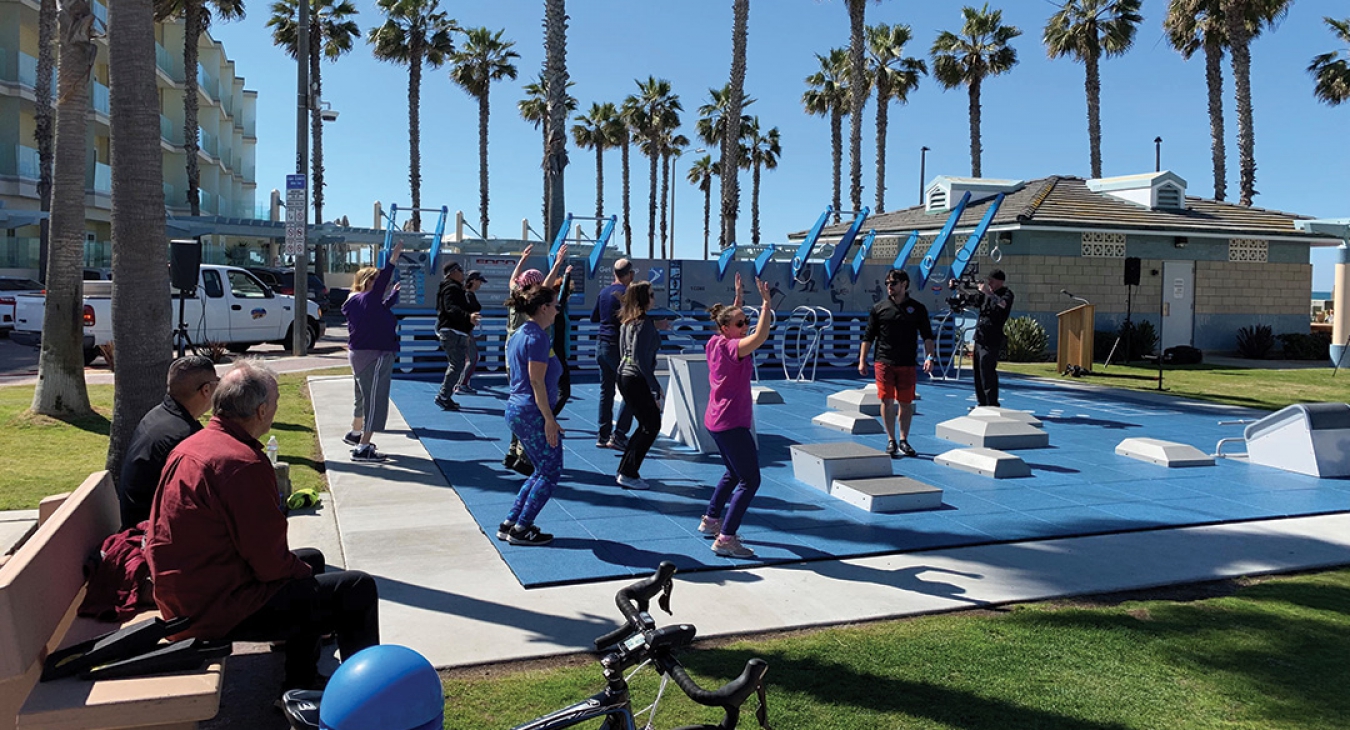 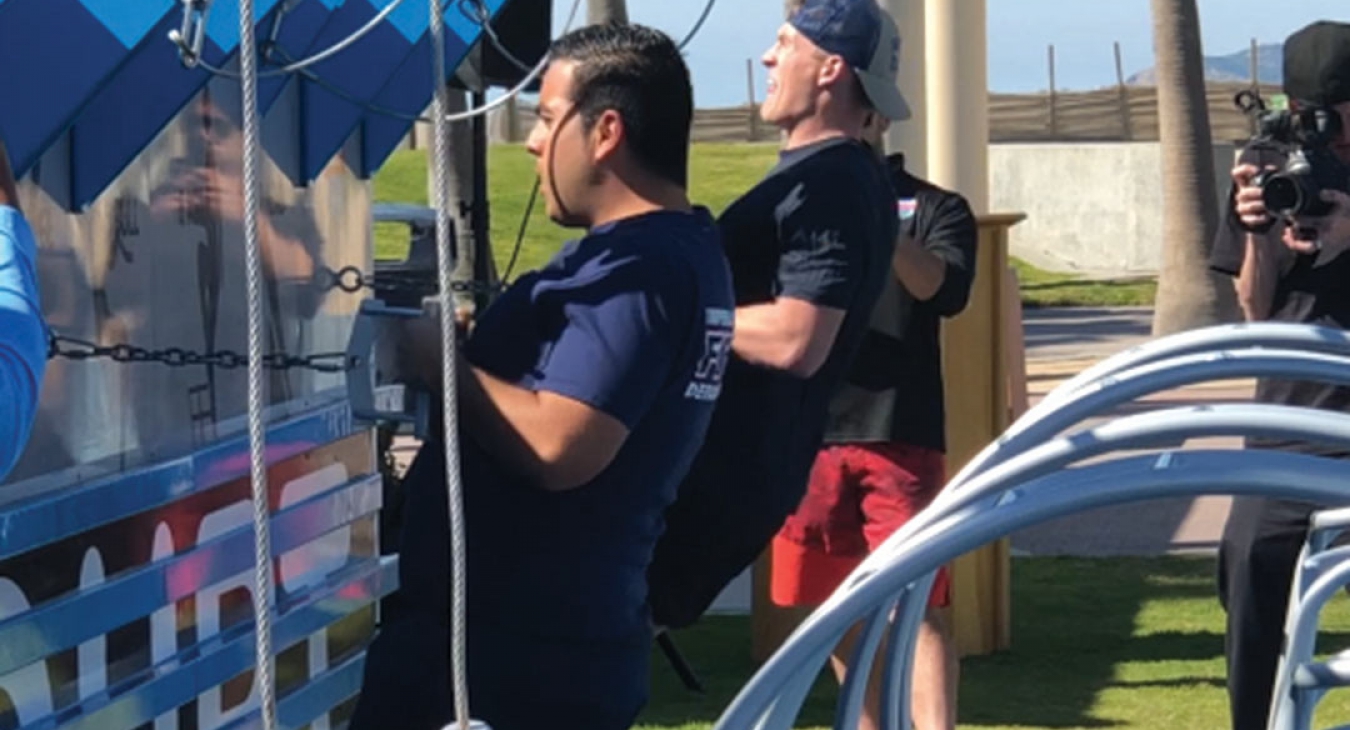 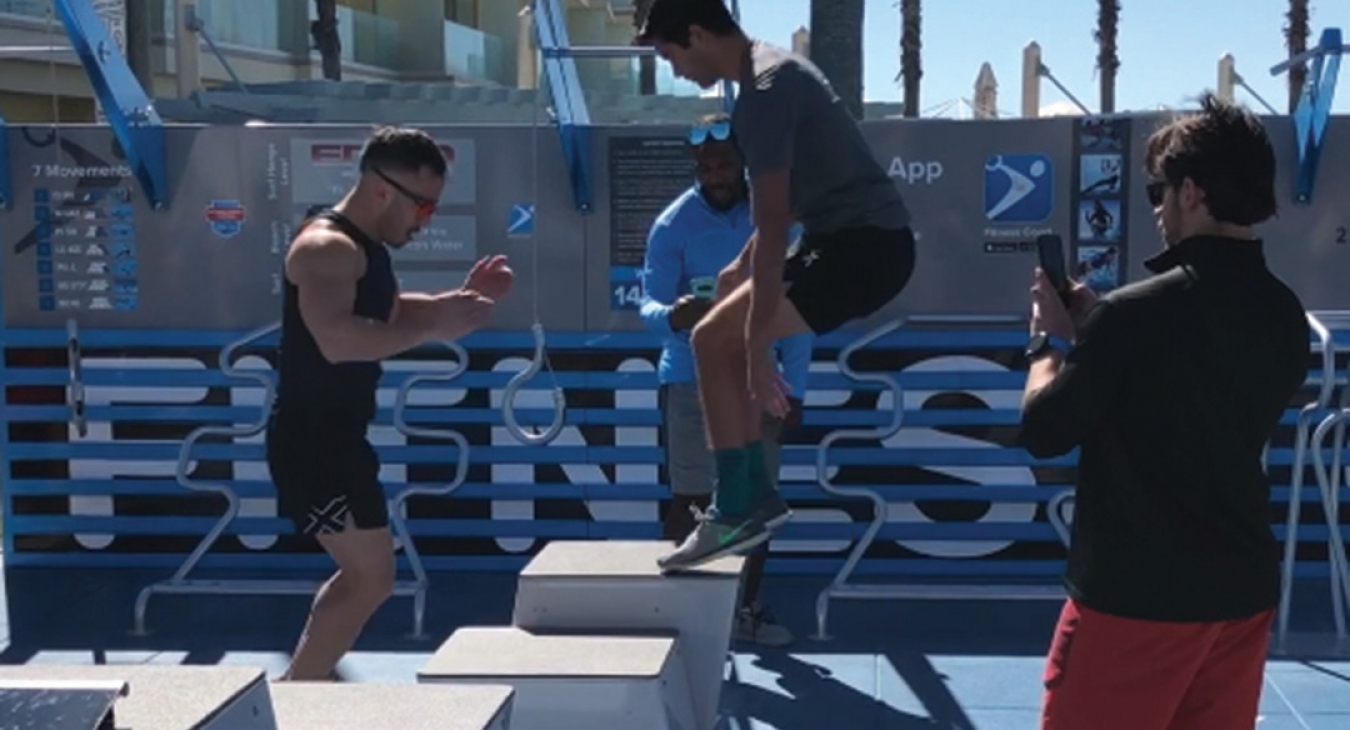 From Placemaking To Fundraising, The National Fitness Campaign Covers Every Angle

Among society’s many distractions, sports are the great equalizer and beyond winning, nothing is more cherished about the experience of being an athlete than fitness itself. Serge Dedina has been an athlete his whole life. He grew up in Imperial Beach, CA surfing Southern California’s best breaks. He trained extensively as a triathlete in college while earning a BA from UC San Diego, a master's at the University of Wisconsin-Madison, and a Ph.D. from the University of Texas Austin. In 2000, he co-founded WILDCOAST, an international conversation effort focused on protecting coastal and marine ecosystems. In 2014 he was elected Mayor of his hometown where infusing fitness into his community-building ambitions has been among the most rewarding aspects of the job.

“I started swimming and running competitively in high school and doing triathlons in my early 20s,” says Dedina. “Fitness has always been an important part of my life and in my role as Mayor it has become a critical component of my community development efforts.”

Located on the southern edge of San Diego on the U.S. / Mexico border, Dedina describes Imperial Beach as a family-oriented town populated by people who have an affinity for public space and natural love of the outdoors. When he first learned of an innovative program combining physical fitness with community-based placemaking, Dedina quickly realized that the National Fitness Campaign’s Fitness Court was a perfect fit for his vision of a vibrant community.

“When I first heard about the National Fitness Campaign and the Fitness Court, I knew immediately this was exactly what we needed,” says Dedina enthusiastically. Established in 1979, for more than 40 years the National Fitness Campaign has been dedicated to helping communities fund, build, and activate the world’s best publicly accessible outdoor gym. The Fitness Court is a functional fitness circuit-training system designed around a series of bodyweight exercises that provides a simple, yet powerful, full-body workout. Progressing through seven functional fitness zones, the Fitness Court combines 50 different components on a 38’ x 38’ sports court designed to be installed in public spaces wherever there is a community desire for the health, wellbeing, and vitality that fitness compels.

The brainchild of National Fitness Campaign’s Founder and Director, Mitch Menaged, over the four decades since inception the evolution of the Fitness Court, has been a labor of love and an altruistic passion.

“I am invigorated by the opportunity to make a positive impact on communities across America,” says Menaged of his life’s work. “More than just a way to give the public a good workout, this is an opportunity to impact the way cities think about building healthy infrastructure.”

Menaged points out that 40 years ago when he first conceived of an outdoor, bodyweight exercise circuit, the term aerobic was just coming into public consciousness. Few outside research-based healthcare recognized the impact of human movement and physical fitness on reducing cardiovascular disease or the now widely understood correlation between obesity and poor health outcomes. To develop the latest iteration of the National Fitness Campaign and new digital Fitness Court, Menaged has assembled a powerful team of thought leadership in bodyweight fitness, industrial design, urban planning, and grant funding to propel a cohesive, achievable vision of civic activation.

“To be effective, the Fitness Court has to be engaging,” continues Menaged. “In the context of public infrastructure, engagement means finding sites in public parks, along walking and biking trails, in places where the value add is obvious and accessible to everyone.”

In Imperial Beach, the first site that came to mind for Dedina was in Dunes Park. Just steps from the Pacific, Dunes Park is the quintessential California beachscape, with a basketball court surrounded by towering palm trees overlooking the ocean.

“Dunes Park was pretty much perfect,” says Dedina of the chosen location in a public beachfront park. “By placing the Fitness Court in public view, the park is now populated by people easily seen working out.”

With site selection simplified, Dedina shares that perhaps the biggest challenge in realizing the Fitness Court in his hometown was rather more pragmatic. His big concern was how to pay for it. Despite an oceanfront address, Imperial Beach is bereft of economic development and is largely funded by a single-family residential tax base rather than commercial interests.

“Our goal isn’t just to sell cities an outdoor gym, we are committed to helping them fund it too,” says Menaged, who has long understood the need for multi-faceted investments in financing Fitness Courts. “Our value as a consultant is not just in our experience with fitness but significantly with building fundraising partnerships. We help cities jump-start the process and have a complete tool kit of materials and resources partners can use to attract key sponsorships for their Fitness Courts.”

In the case of Imperial Beach, Dedina turned to his lifelong connection in ultra-competitive athletics to secure a partnership with the first name in triathlons, IRONMAN Foundation. Dedicated to creating positive, tangible change in race communities through grant funding and volunteerism, IRONMAN Foundation, was a perfect fit and the partnership has extended well-beyond simply financial support.

Imperial Beach’s Annual Mayor’s Fitness Challenge kicks off IRONMAN 70.3 SUPERFROG weekend with a little friendly fitness competition between Team IB and Team IRONMAN. In the spirit of sportsmanship and the comradery of fitness, a team of Imperial Beach firefighters, lifeguards, and sheriffs compete in a series of events against a team drawn from IRONMAN Foundation’s leadership. The IRONMAN 70.3 SUPERFROG is based on Navy SEAL training and features multiple loops, a whole lot of sand, and offers top performers qualifying slots to the IRONMAN 70.3 World Championships.

“The Fitness Court has been a huge success,” says Dedina. “It’s a great placemaking project and a high caliber fitness experience. In Imperial Beach, we see everyone from Navy SEALS to everyday Joes and Janes using it. Fitness is the new social nexus and the National Fitness Campaign’s Fitness Court is a great way to bring people from all backgrounds together in a democratic public space.”