Two Playful Women Taught Us So Much 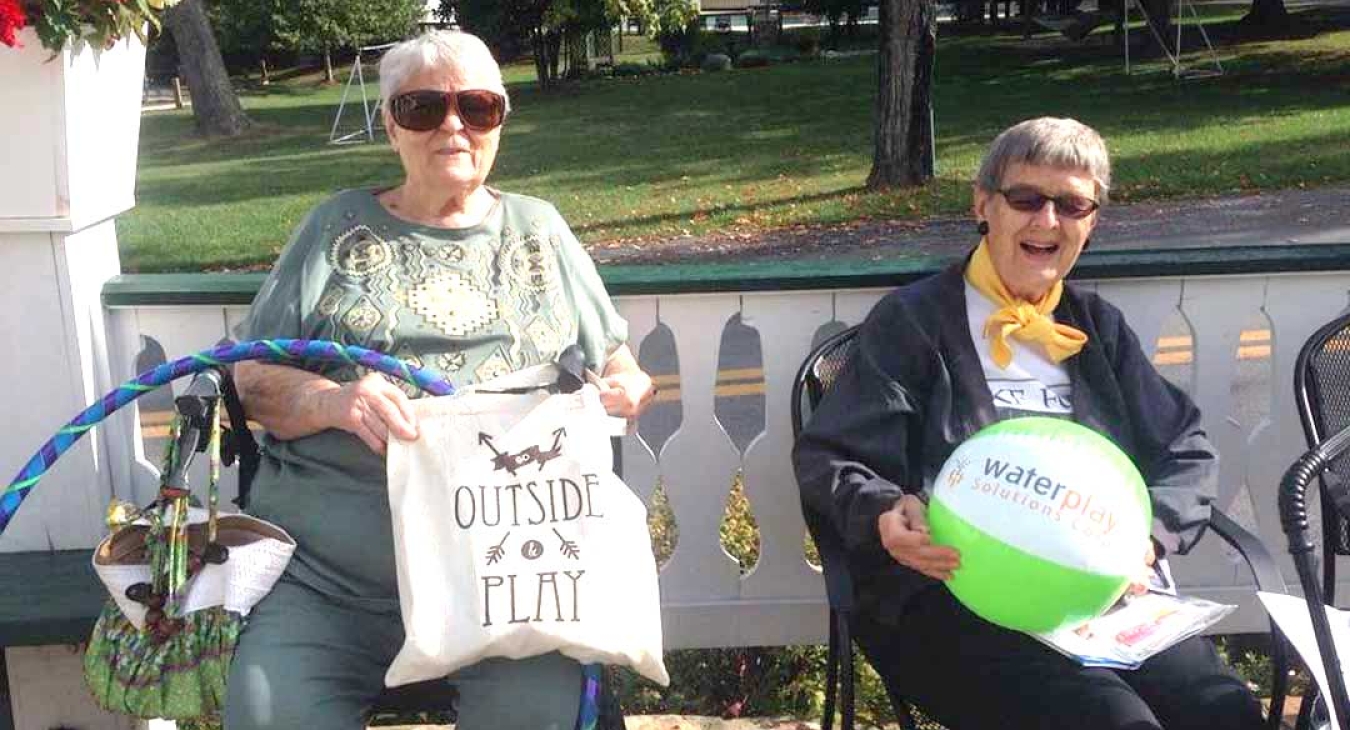 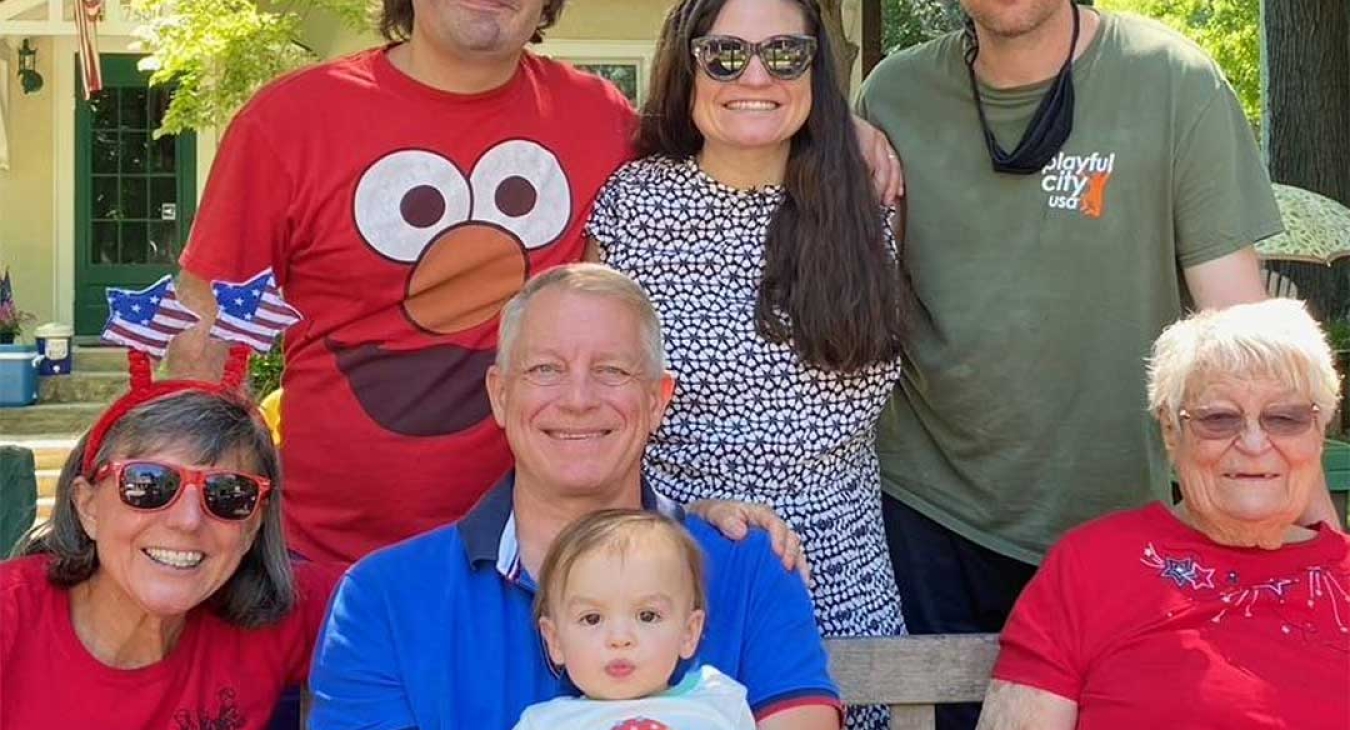 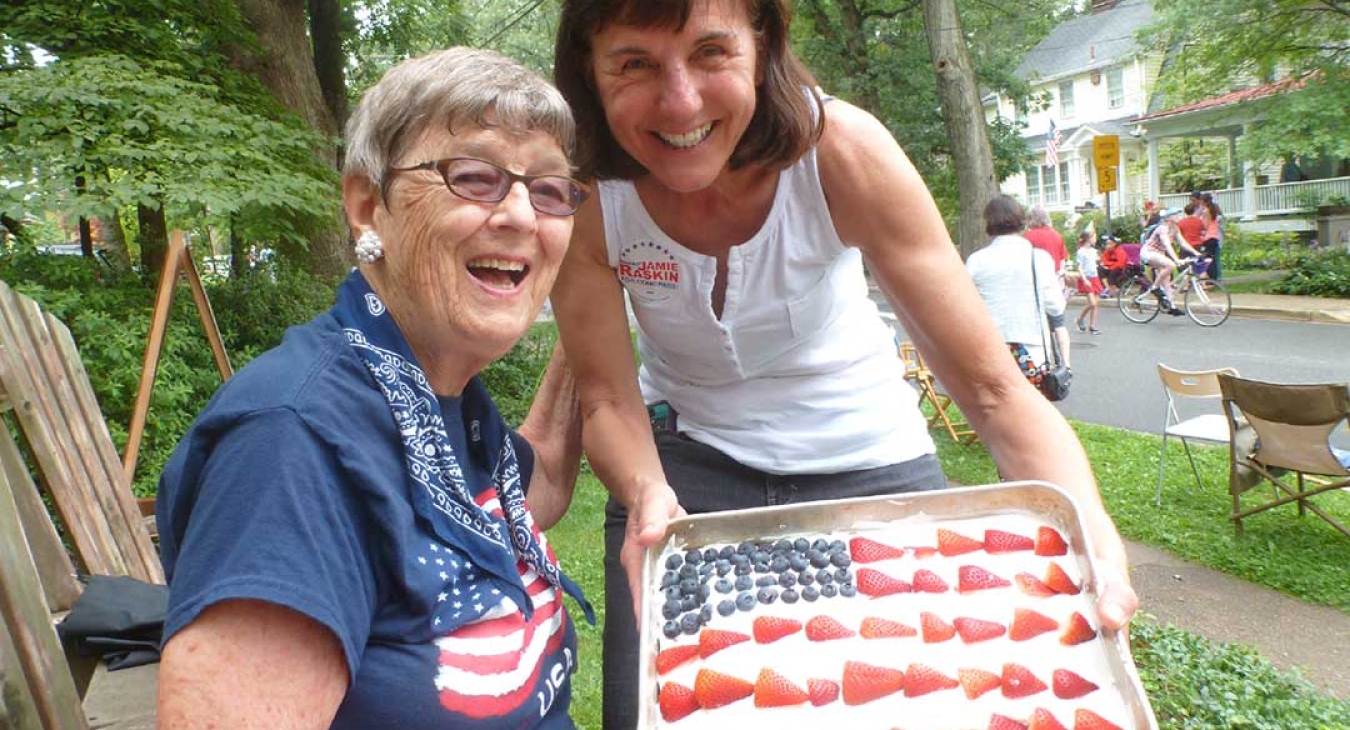 As you age, you may ponder, from time to time, which people have been the biggest influences on your life there are your parents, maybe a teacher or a coach. I’m willing to bet reading this article will bring a few to mind who helped you along the way. The two ladies in the photo above had a tremendous impact; both recently passed away. Anna Mae Rumbaugh who is holding the hula-hoop was my mother-in-law. Colleen DiPaul holding the beachball, I met at church in Takoma Park, in 2004.

The photo was taken at Capon Springs Farm in West Virginia in 2016. For several years I led Playful Adventures with Cherwanda Oliver, and these two lovely ladies took part.

I first met Anna Mae in 1980 when my future husband Tom invited me to dinner. I was in awe of the delicious meal Anna Mae prepared. Anna Mae sure knew how to cook, and she baked the best apple pie, cookies and many other treats. After Tom and I got married in 1982 and then had our son Alex in 1985 and our daughter Sarah in 1988, Anna Mae and Tom’s father, Jack, would often visit, they loved to help with chores, cook meals and especially, to take the children to the playground.

At her house in Brush Valley, Pennsylvania, Anna Mae became a master gardener, so when my in-laws would visit, we often went to Brookside Gardens, a public garden filled with flowering plants, fountains, and a pond where you could feed the fish. Our children thought Brookside was just another playground since Grandma enjoyed going there so much.

Over the years, I picked up many tips from Anna Mae about gardening and maintaining a playful attitude and sense of humor. And I admired her fortitude. Anna Mae was always planning when we were all together. She wanted to know the plans for the day. I admired Anna Mae being on top of things; getting chores done, planning meals, but most important to her was that we fit fun and play into every single day. We took the kids to the zoo, botanical gardens, to see the cherry blossoms in bloom and over the years many playgrounds.

When Jack was declining Anna Mae took care of him and didn’t get a chance to do as many activities as she may have liked. After he died, I suggested to Tom that we take his mother on vacation with us. I was already developing an idea for a nonprofit around “play” As an athlete and tennis coach, I was always interested in how people play. That trip, we ended up in Rochester, New York, in the Finger Lakes region, to visit the Strong Museum, which is known as the Play Museum. Anna Mae and I both enjoyed the exhibit, and we became closer because of our mutual appreciation for play in all its forms.

See the photo from July 4, 2022 (second image above). The Takoma Park July 4 Parade goes past our house. Our son Alex and our daughter’s family Sarah, our son-in-law Zach and our grandson Charlie were all visiting and so was Anna Mae, Tom’s mother.

In 2004, when I first met Colleen, I made the biggest blunder of my life. She was wearing a tennis pin, and I asked Colleen if she used to play tennis. Colleen replied, “Why Pat, I still play.” Then she asked me for my phone number. Later that very day Colleen called to see if I wanted to go hit tennis balls-outside. Keep in mind it was January, sunny and maybe forty-five degrees. Well, since I felt like I should make up for my blunder I went and played tennis with Colleen. I recall that experience as one of the most fun I have ever had on a court. Colleen was just so excited we would get rallies of ten maybe twelve balls before someone missed. I absolutely fell in love with how much Colleen appreciated having a good time on the court. Over the years Colleen’s positive attitude has had a hugely positive effect on me.

Around 2007 Colleen invited me to inter-generational games night held at Victory Tower, where Colleen lived for 24 years. Prior to COVID every Tuesday night I was in town from 7-9pm. I would join a group of seniors, along with teens who received community service, and other folks from the community to play board games and cards. Colleen loved a card game called Kings in the Corner. Colleen got a kick out of laying down an ace, so no one could play on that column. We called that a "nasty".

In May 2008, Pauline Betz Addie who had won five US Opens and one Wimbledon in women’s singles in the 1940’s was honored at the Cabin John Indoor Tennis Courts in Bethesda, Maryland. The facility was being renamed after Pauline. I was fortunate to teach tennis under Pauline from 1979-1983. Billie Jean King was going to speak, and I invited Colleen to go with me. We had a fabulous time. I introduced Colleen to Pauline, and we got to meet Billie Jean King. When I was a teenager, I had Billie Jean’s poster on my wall. For years Colleen and I would talk about those special experiences.

On March 15, 2009, I held the first play committee meeting. Colleen was one of the seven people that attended. Colleen had been supportive for years of the play movement I’d been working on.

In September 2009, I organized the inaugural Play Day as part of the non-profit I founded, Let's Play America. Both Anna Mae and Colleen attended. Anna Mae made homemade play dough and Colleen participated in the mini tennis activity.

In September 2015 at our Annual Play Day the play team decided we wanted to start honoring folks who have been play advocates, so we gave Colleen the first Spirit of Play Award. Anna Mae was also a huge supporter of Play Day events. One year, we learned that September 19th is International Pirate Day, when someone attending Play Day gave us pirate eye patches. Anna Mae gladly wore hers for the rest of the day.

As Colleen started losing her balance, she switched from tennis to table tennis. I joined Colleen in the table tennis class offered to seniors by our City of Takoma Park Recreation Department. Colleen loved to play, was always a great sport and she strived to do her best. At one Play Day I found Colleen in the Recreation Room playing table tennis with a six-year-old. This young fellow shared in a video our City TV captured how much fun he had while playing Colleen. Wouldn’t it be great if we all had Colleen’s attitude when it comes to playing?

Anna Mae died on September 23rd, the day before our 14th Annual Play Day. Colleen died on October 19th. I miss these two special ladies. They both found enjoyment in life by pursuing play. They were both enormous influences on me, personally and professionally. These two women worked hard and pursued their passions. Both women were devoted to their families, especially their grandchildren. Now that I’m a grandmother of Charlie and another sibling along the way I want to be like these women; help my family however I can, give my best to my profession as a play advocate and to make sure I make time to play. I want to model these traits for future generations. I urge readers to follow in the footsteps of these play ladies, find the play activities you enjoy and make time to play them regularly. You deserve to play.