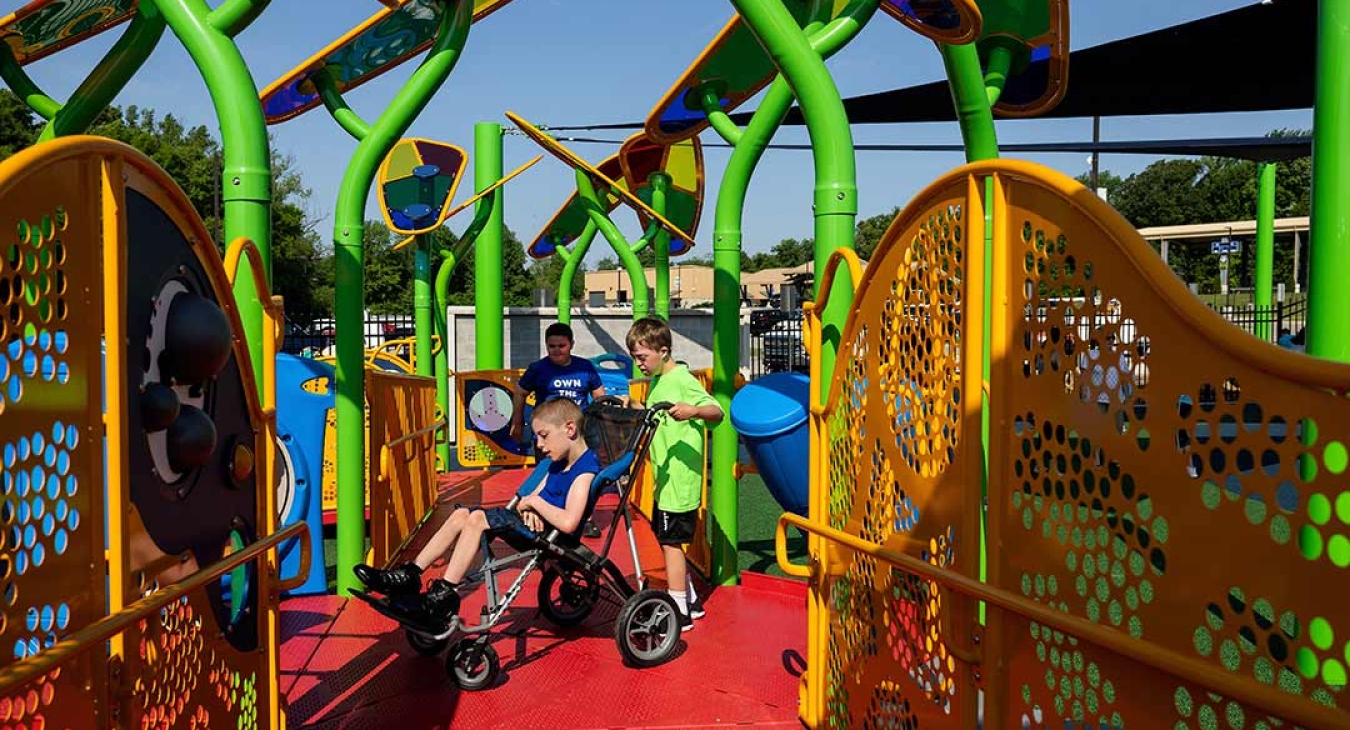 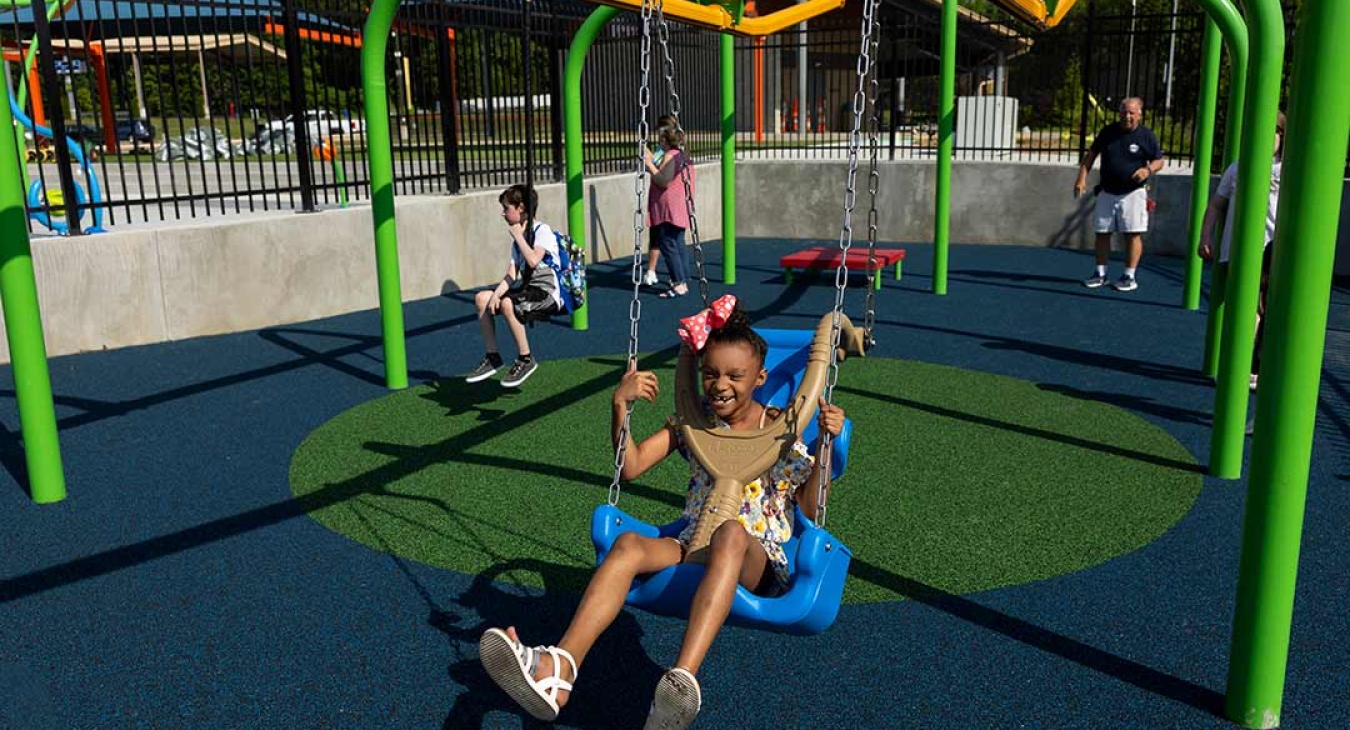 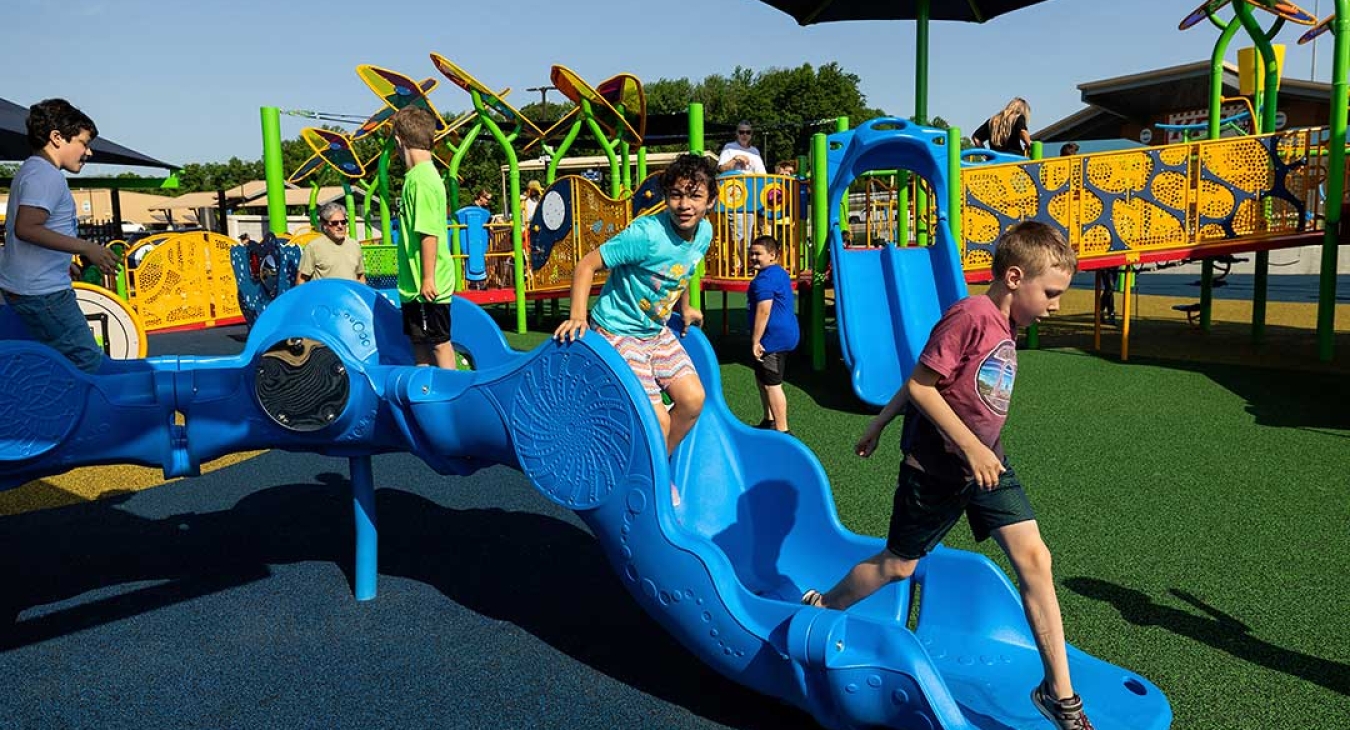 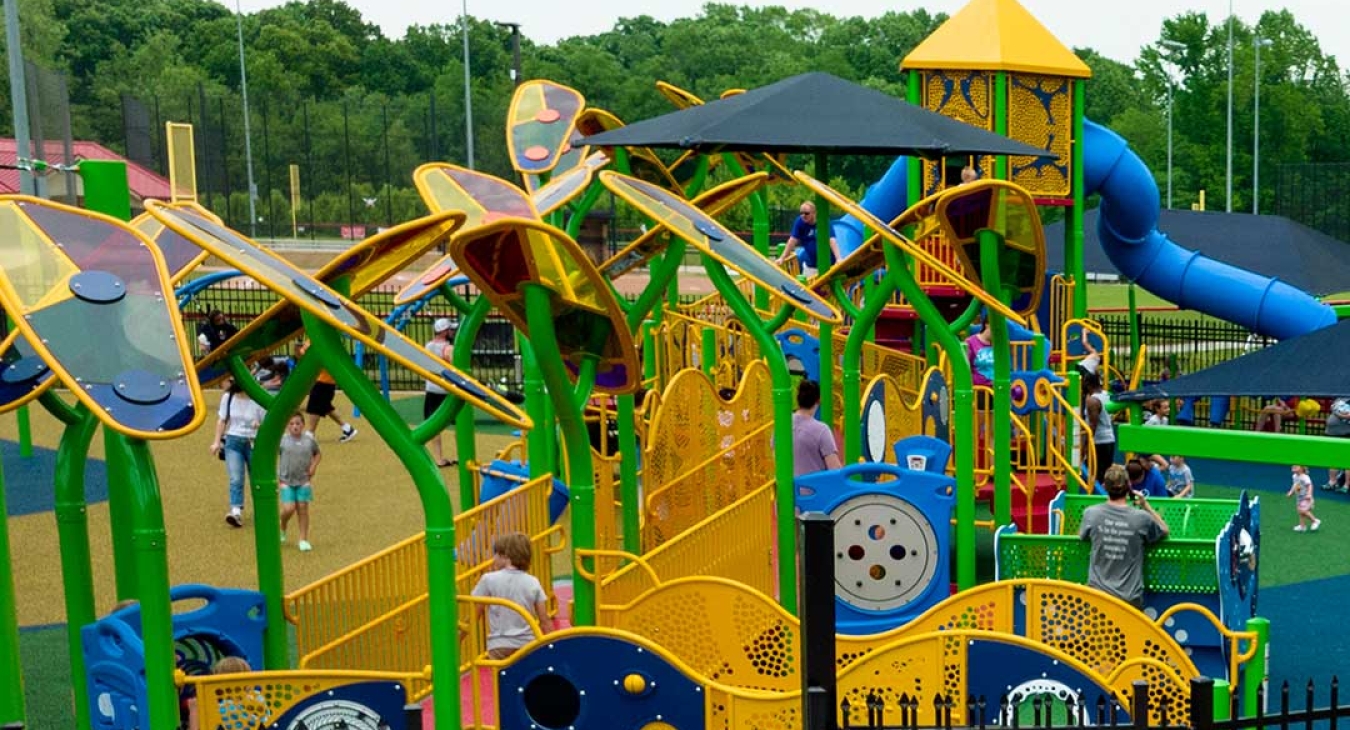 Situated along the Ohio River at the southernmost tip of the Hoosier state sits Kevin Hammersmith Memorial Park in the county seat of New Albany, Ind. As a National Demonstration Site for inclusive outdoor play, the playground at KHMP exceeds guidelines for ADA accessibility. This was the selling point used by the Floyd County Parks and Recreation Department, when the team launched the $1.3 million playground project seven years ago. But words alone didn’t extend far when it came to fundraising on such a scale. Superintendent Jeffers realized that he had to show, rather than tell, to inspire donors and secure funding for the innovative design.

With the help of a film crew, the department captured the lived experiences of Floyd County’s 2,200 special-needs children. They highlighted perspectives of community members who would directly benefit from an inclusive playground, and once donors connected with the faces in the promotional video and understood the personal impact of a donation, funds started to pour in.

The idea for Floyd County to build an accessible outdoor play site originated from the concerns voiced by special education teacher Mindy McKnight. She saw that her special-needs class at Mt. Tabor Elementary struggled to participate comfortably in field day activities. This lack of inclusive social infrastructure prevented her students from equally developing social skills and play skills that allowed them to experience the kind of carefree leisure and playtime enjoyed by their peers. For McKinght’s students with more severe disabilities and wheelchair reliance, the ability to play and have fun was totally restricted by the exclusion of accessible spaces. It was 2015, and the educator had only one solution. She took her concerns to Superintendent Jeffers and his staff, proposing a playground where all children could play together, side-by-side, regardless of their ability level.

Looking at the numbers, the parks and recreation team recognized the community’s overwhelming need for an accessible playground. Superintendent Jeffers noted that the whole region of Southern Indiana lacked a large, accessible play structure. He saw the project as a regional asset and reached out to experts in Michigan and Tennessee who specialized in inclusive playground designs. While the proposed project site at KHMP left much to be imagined, his team envisioned a mock-up of endless possibilities for the empty plot of dry land.

Following inclusivity guidelines from the Me2 program, the design was finalized. In addition to a splash pad, it included wheelchair accessible ramps and turf, sensory wave sound boards and shaded musical instruments for the visually and hearing impaired, and inclusive swings, slides, and zip lines that could be enjoyed by wheelchair users and able-bodied children alike. For McKnight and Superintendent Jeffers, the idea of side-by-side play was paramount.

“Putting special-needs children out there to play all alone would be worse than giving them nothing to play on at all,” Jeffers said.

With the help of grants and donations from Patronicity and the Indiana Housing and Community Development Authority’s matching funds, Floyd County residents raised over $109,000 towards the construction of the new accessible playground. As momentum for the project picked up after the promotional video, the playground received financial support from individual members of the community and larger charitable organizations who believed in the cause. According to Superintendent Jeffers, the biggest hurdle of the undertaking was soliciting donations during Indiana’s COVID-19 outbreak. The project was in its eleventh hour of fundraising when shutdowns occurred across the state. Finally, six years after McKnight first asked Floyd County to build an accessible playground, the Parks and Recreation Department broke ground in August 2021.

“Working with GameTime and Sinclair Recreation to get this playground equipment has been wonderful,” Jeffers said. “I’ve been doing this for 47 years, and it’s the most impressive playground I’ve ever seen.”

Most of the site’s larger pieces of equipment had been purchased in the years leading up to the first day of construction, sitting in what he described as a “mudhole” at KHMP, waiting to be put to good use. As soon as the playground’s soft, pour-in-place rubber turf was installed, the vision came to life. The new ground was compatible for knees, wheelchairs, and walkers alike, as opposed to traditional playground surfaces like mulch or pebbles.

After nine months of construction, Floyd County’s accessible playground officially opened to the public on May 21, 2022. It was designed to meet the Me2’s Seven Principles of Inclusive Play and provide fun, developmentally appropriate play activities for all ages and abilities. For parents like Ryann Bond, the playground at KHMP is life changing. Her 8-year-old son, Jax, has Spina Bifida, and he’s paralyzed from the waist down. After years of feeling excluded and watching his friends play without him, Jax can now challenge other kids to a zip line race or even join them on the swing set in his wheelchair.

“All I want is for him to have friends and to actually be able to play with them and have that normal, child play-time interaction,” Bond said. “I think this park is going to make that possible.”

By thoughtfully aligning your outdoor play environment with the 7 Principles of Inclusive Playground Design, your project can be designated as a National Demonstration Site and serve in a network of leadership case examples — like Floyd County’s accessible playground at KHMP — that address local needs and goals of community stakeholders, deploy research-based best practices throughout the environment and focus on collecting meaningful outcomes.

How To Become A National Demonstration Site

The 7 Principles of Inclusive Playground Design 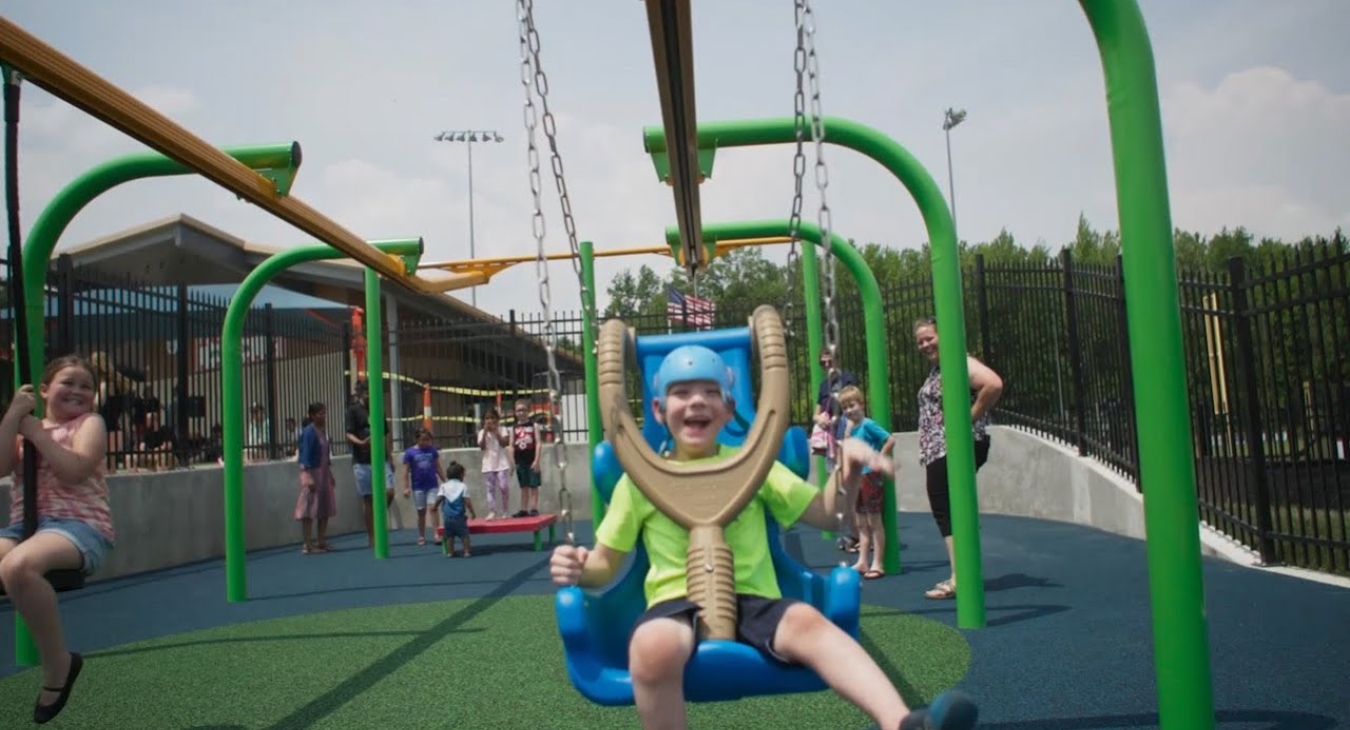