This spring, the National Program for Playground Safety (NPPS) released its 2004 Safety Report Card for childcare, school and park playgrounds. This report card is based on data collected from over 3,000 playgrounds during on-site visits during 2003. The randomly chosen sites were first selected in 1999, during the original assessment process. By returning to these sites, NPPS sought to document any progress that may have been made during the last four years.

The report card is based on the SAFE model developed by the NPPS. The model has four elements, Supervision, Age Appropriate Design, Fall Surfacing and Equipment and surfacing maintenance.

There are distinct items under each of these categories that help create a SAFE playground environment. What follows is a brief summary of the new SAFE report card.

There has been considerable updating of playground equipment during the last four years.  In the previous study, 46 percent of the sites had equipment installed between 1991-1998. In this latest study, it was found that 36 percent were installed between the years 1991-1997 with 43 percent having been installed since 1998. In addition, 60 sites were undergoing renovation during site visitations.

Slides (93 percent), swings (61 percent) and horizontal climbers (46 percent) remain the top three pieces of equipment found on playgrounds; although both swings (-11 percent) and horizontal ladders (-6 percent) showed a slight decline in numbers over the previous study. Merry-go-rounds (7 percent) are disappearing, as are monkey bars (5 percent) and animal swings (less than 1 percent). In the two latter cases, this is a good sign, since the Consumer Product Safety Commission issued a safety alert concerning monkey bars in the 1980’s and a voluntary recall of animal swings in 1995. Climbing walls and track rides (both at 11 percent) are starting to increase in popularity or frequency.

How did the nation do on each part of the SAFE equation?  Let’s look at a brief summary of each section.

The presence of adults and the ability to supervise properly is a crucial element in order to provide a safe play environment for children. More and more court cases involving playground incidents cite the lack of supervision as one element of negligence.  Unfortunately, this is the one area in the overall report card that decreased in 2004 (C) from the 2000 report (B-).

Supervision is not only being there—it is the ability to actively move through the playground and see children. However, play structures need to be designed for good visibility. This is especially true of composite structures that allow more children to congregate in a smaller space.

In addition, it is helpful to have rules posted concerning expected behavior. This is especially true in community play areas where agency supervision is not present.  However, parks are more likely to have rules posted governing the behavior of animals (i.e. dogs must be on a leash) than the fact that adult supervision is required for children playing on the equipment.

Children need to play on equipment that is designed for their developmental needs and abilities. You would not buy a pair of shoes for a 2-year-old and expect them to still wear them as a 12-year-old. Likewise, one should not buy equipment and expect that one size will fit all the needs of children ages 2-12.

One possible reason for lower score concerning separate play areas is the increase of composite structures. Many times, these structures are designed for mixed usage; that is, they have low elements (i.e. four feet high slides) for younger children and high elements (i.e. eight feet slides) for older children. However, because of the linkage inherent in these structures, there is nothing to prevent the younger children from accessing the higher elements. A 3-year-old is not a 10-year-old in terms of strength, reasoning ability, and physical development. Without proper guidance in an integrated age designed playground, it is very easy for a child to get on to equipment that is not designed for his/her developmental abilities.

With the absence of signage (only present on 9 percent of the playgrounds) to direct adults, especially parents on a park playground or a school playground during non-school time, it is a common sight to find children playing on equipment that is too high or large for their developmental abilities. Although adults may ignore the sign’s recommendation and put children on equipment that is not appropriate for them, the presence of a sign shows a good faith effort on the part of the agency to try to educate and inform adults about safety issues.

Falls to surfaces are cited as a contributing factor in over 70 percent of playground injury data (CPSC, 2000). Thus, proper surfacing under and around the playground equipment is a crucial element in providing a safe play environment.

There is good news and bad news in this area of the report card. The good news is that the grade in this section increased from a C to a B- in the 2004 report card. In part, this was due to the fact that 82 percent of all playgrounds surveyed are now using suitable loose-fill or unitary materials under and around playground equipment. In addition, agencies are starting to place these materials in the appropriate use zones (71 percent for stationary equipment). 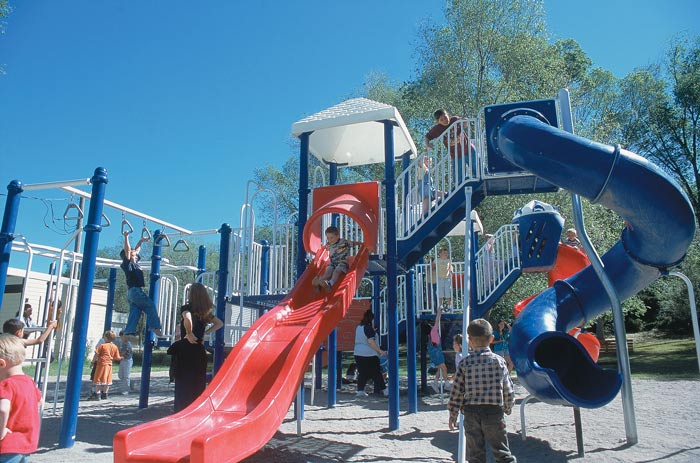 However, the bad news is that because agencies are failing to maintain loose-fill materials at the appropriate depth (only 19 percent of playgrounds had appropriate depth), they are putting children at risk for injury. As Fran Wallach has noted, having not enough cushioning material may be worse than having no surfacing material at all, since you are giving children an illusion of safety. Thus, they may try new and inventive play behaviors that they would not do otherwise if they knew that there was a hard surface.

The next big issue to deal with in terms of surfacing is one of maintaining materials, especially if they are loose-fill.  If an agency will be hard-pressed to do the maintenance, they need to think seriously about getting an ASTM/CPSC tested unitary surface. While the initial cost of unitary materials is high, pro-rated over a ten-year period, it may provide cost savings in terms of maintenance and liability.

Equipment and surfacing maintenance is the fourth element of SAFE playgrounds.  Without routine inspection and repair, any equipment will deteriorate and pose a hazard to children using the equipment. It appears that the maintenance of metal (74 percent free of rust) and wood equipment (65 percent free of splinters) is insufficient in comparison to plastic equipment (96 percent free of cracks and holes). Part of this problem lies in the fact that the older the equipment tends to be composed of wood and metal.  Proportionately, the metal equipment installed prior to 1991 had more rust present than after 1991. A similar finding was seen with wooden equipment. It should be noted that more plastic equipment has been installed since 1994 than before that time.

Gaps (30 percent) and head entrapments (21 percent) continue to be problem areas. Gaps in equipment may be the result of inappropriate installation or aging equipment where joints may have separated.  Again, it appears that the older the equipment, the more gaps that are present. Both gaps and head entrapments can lead to life-threatening situations involving strangulation and suffocation.

Once one has designed a safe playground environment, equipment and surfacing must be maintained to ensure that the playground remains safe for children. Without routine inspection and care, even new playground can contain safety hazards for children.

Lessons learned from the 2004 Report Card

While it is encouraging that basic safety guidelines and standards, as measured in this latest national survey, have been met in a majority of park, school and childcare playgrounds in the United States, there is still much more that agencies can do to ensure SAFE playgrounds. Suggestions for improving the safety of playgrounds include:

Overall, adopt the Consumer Product Safety Commission Public Use guidelines as the standard of care for all public childcare, school and park playgrounds.

The 2004 report card shows that when agencies and communities take children’s safety seriously, positive steps can be made.  By working together, adults can help ensure that playgrounds are SAFE for America’s children.

For further information, including suggestions for change, contact the National Program for Playground Safety.  Complete copies of national and state report cards can be downloaded from the NPPS web site: www.playground.safety.org. In addition, a complete report of the survey: How Safe Are America’s Playgrounds: An Update can be obtained from the NPPS ($5.00 shipping and handling fee).