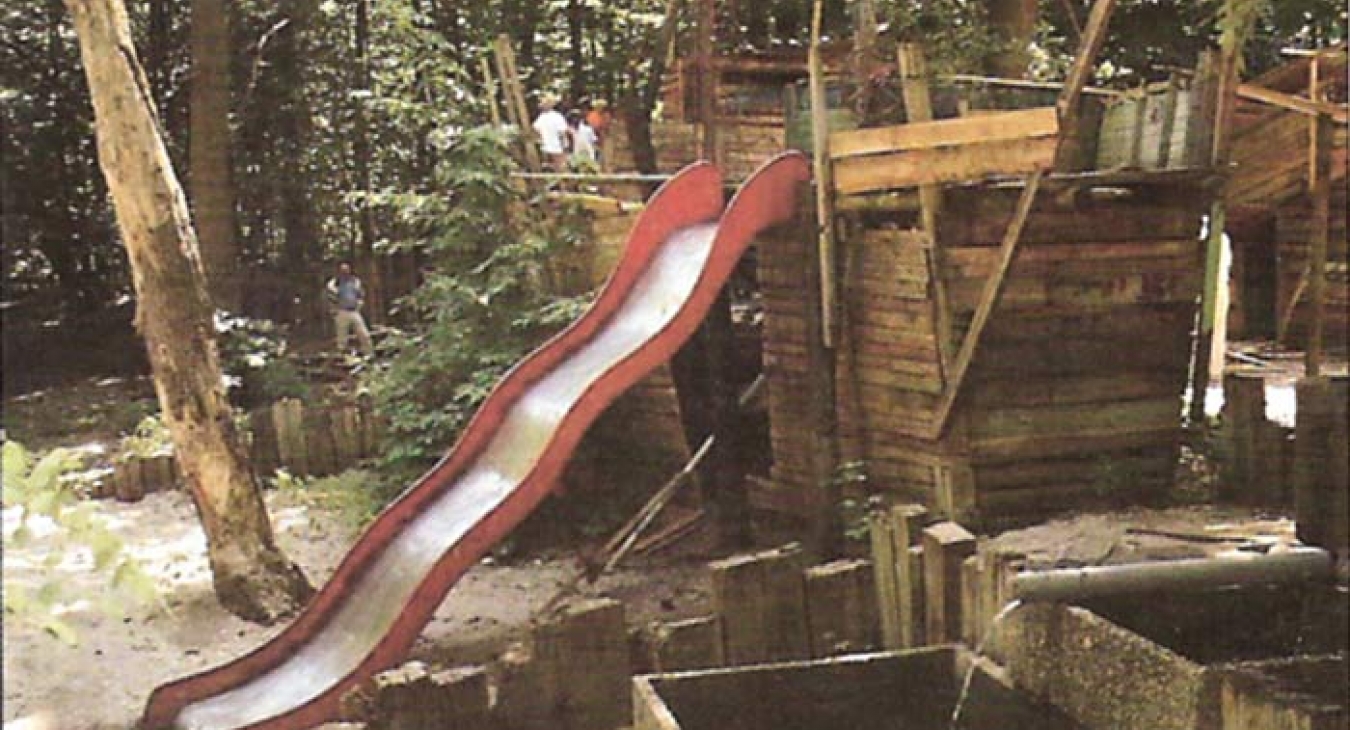 At the same time, in other parts of the world, people were beginning to awaken to the fact that safety for children was a critical issue, and that one of the areas we could do something about was on the playground. In certain parts of the world, more attention was paid in this area than in others. The United Kingdom, Germany, Canada and Australia, all worked toward providing some kind of guidelines or standards for play equipment and play areas. New Zealanders actively sought reference points for the development of safety standards in their country. Yet there were other countries who did not follow this path for playground safety, primarily because the cultures did not call for this kind of development. 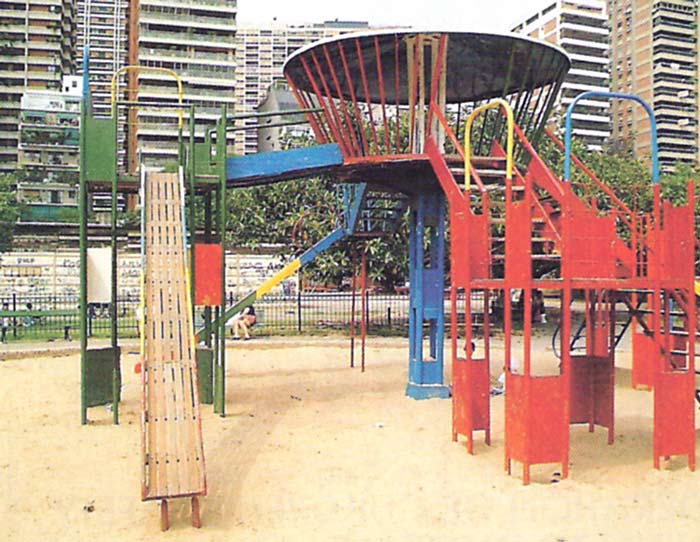 For example, in the U.S. we are still debating the maximum height we should have - or if we should have a maximum height at all - on platforms and slides. The recommended height by many is five or six feet. In Germany, there are pieces of equipment that are 20 feet up in the air, and that is considered to be safe by their interpretation.

While the national government was the prime motivator in promoting playground safety in the U.S., in other countries governments are either not willing or financially not able to do the same.

However, over the last twenty years, these playground safety movements have begun to make an impact on various parts of the world.

A major effort has taken place in Europe, where eight countries have developed a safety standard. After Germany had developed its own standard, the U.K. also created its own standard. Admittedly, there have been a number of reasons some political, some economic- to move ahead in the area of playground safety. But the important thing is that we're moving ahead. We are moving forward in play development, in the number of children who are using play equipment and playgrounds, and in the spread of the whole area of leisure, and leisure use of recreation facilities. 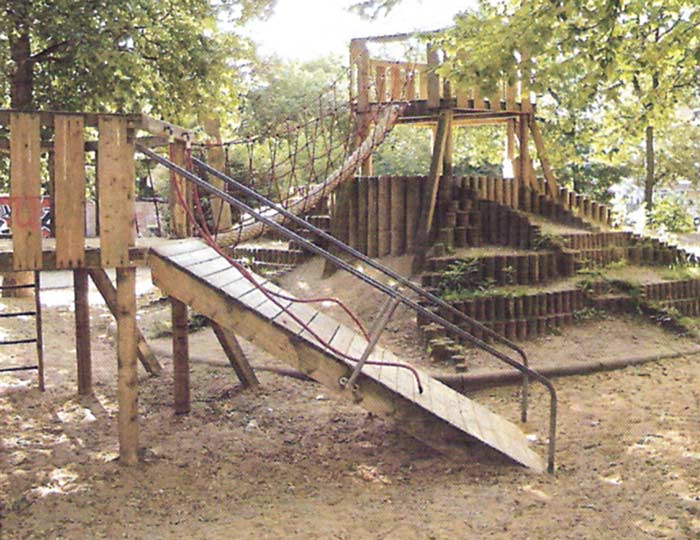 This older, custom-built timber fort on a tiered mound is linked to an outpost by a heavy rope walk in a neighborhood park in Frankfurt, Germany.

We have seen a tremendous increase in the use of amusement parks, theme parks, water parks, fast food restaurant play areas, and park, and school playgrounds. We have seen a direct influence of the increase in tourism on leisure and recreation facilities. Not too long ago there was an article on the biggest hotel in the world opening the highland resort in Pahang, Malaysia. It is a 6,300-room hotel, bigger than the 5,000-room MGM Grand Hotel in Las Vegas. Who had ever heard of Pahang? We never knew that a vacationer went there. It is obvious that tourism is increasing and the use of recreation and leisure facilities are increasing, and clearly, we know by the attention to safety and safety standards that the countries are now also looking at playgrounds.

The U.S. has, in the past, been involved in the development of a U.S. standard, but now has gone even further than that. The American Society for Testing and Materials (ASTM) has been working with the Canadian Standards Association (CSA) to develop a North American Harmonized Standard for the two countries. The ASTM is also attempting to reach out to the European and Pacific Rim countries to see if it can begin, with their help, to develop an international standard for all playground equipment and playgrounds. 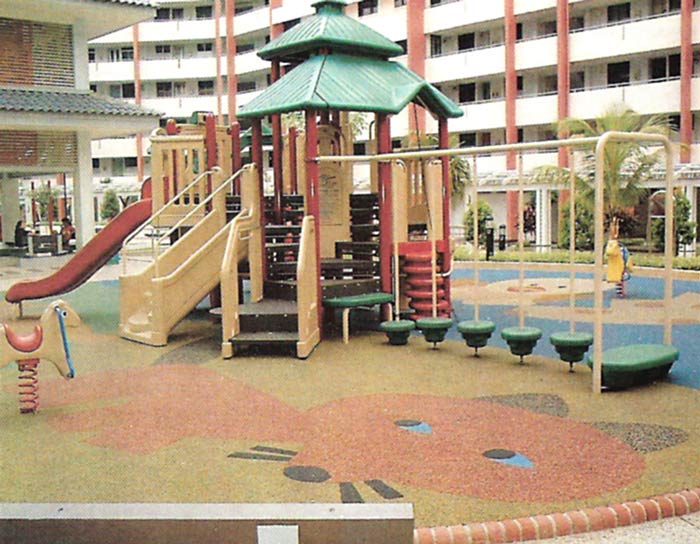 The shade canopy for this housing estate composite play structure in Singapore mirrors the Oriental roof style of the game shelter to the left. Nations all over the world are beginning to be concerned with surfacing safety and are increasing efforts to increase safety for children.

There are two major standard-setting bodies in the world. One is the ASTM, and the other is American National Standards Institute (ANSI). Both have become involved in most of the international standards that are harmonized. Presently a meeting is planned between ASTM and ANSI to discuss the possibility of merging for an international standard for playground safety.

But we have already reached out from here to other places. The National Playground Safety Institute (NPSI) has held seminars in various places outside the United States, including Argentina, Hong Kong, and Singapore. These seminars are the beginnings of the contact needed for playground safety. Monty Christiansen has served as the informal representative and ambassador of NPSI to Argentina, England, Australia, Hong Kong, New Zealand, Singapore, and other places. 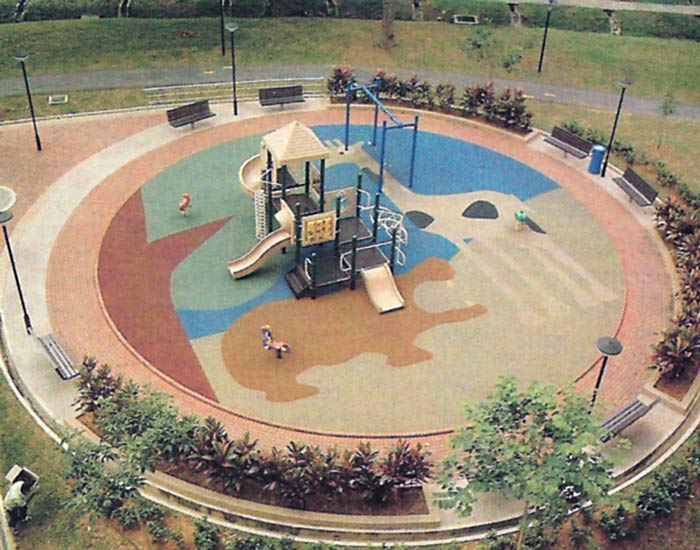 This accessible poured-in-place safety surfacing located in a housing estate in Singapore has a jungle theme complete with a colorful tree, a hippo, and a giraffe.

The National Program for Playground Safety has held safety seminars in Germany. The CSA and the Canadian Recreation and Park Society (CRPS) have run training sessions in playground safety in cooperation with NPSI. The International Playground Equipment Manufacturers Association (IPEMA) has been working with the CSA for a third-party testing program on Canadian play equipment products in addition to its current U.S. third-party certification of compliance to ASTM F148 7.

At the present time, there are safety standards in the U.S., Canada, Malaysia, New Zealand, Australia, Singapore and the European Commonwealth. There is also a new effort in Japan to develop a set of guidelines for playground safety in that country.

The U.S. is dedicated to the development of an international safety standard and is working hard to make this possible. It is our contention that children are the same everywhere and they like to do all of the same things in play. We see no reason why they should not have the same protection from dangerous situations on the playground everywhere in the world.

We think, through our international playground safety conferences, which have been done twice at Penn State University, in 1995 and 1999, both chaired by Christiansen, that we will be able to move this effort ahead. These previous conferences were endorsed by over twenty national and international organizations from numerous countries interested in children's safety. Christiansen is presently assessing the need for a third global forum in 2002.