How Design Relates to Play 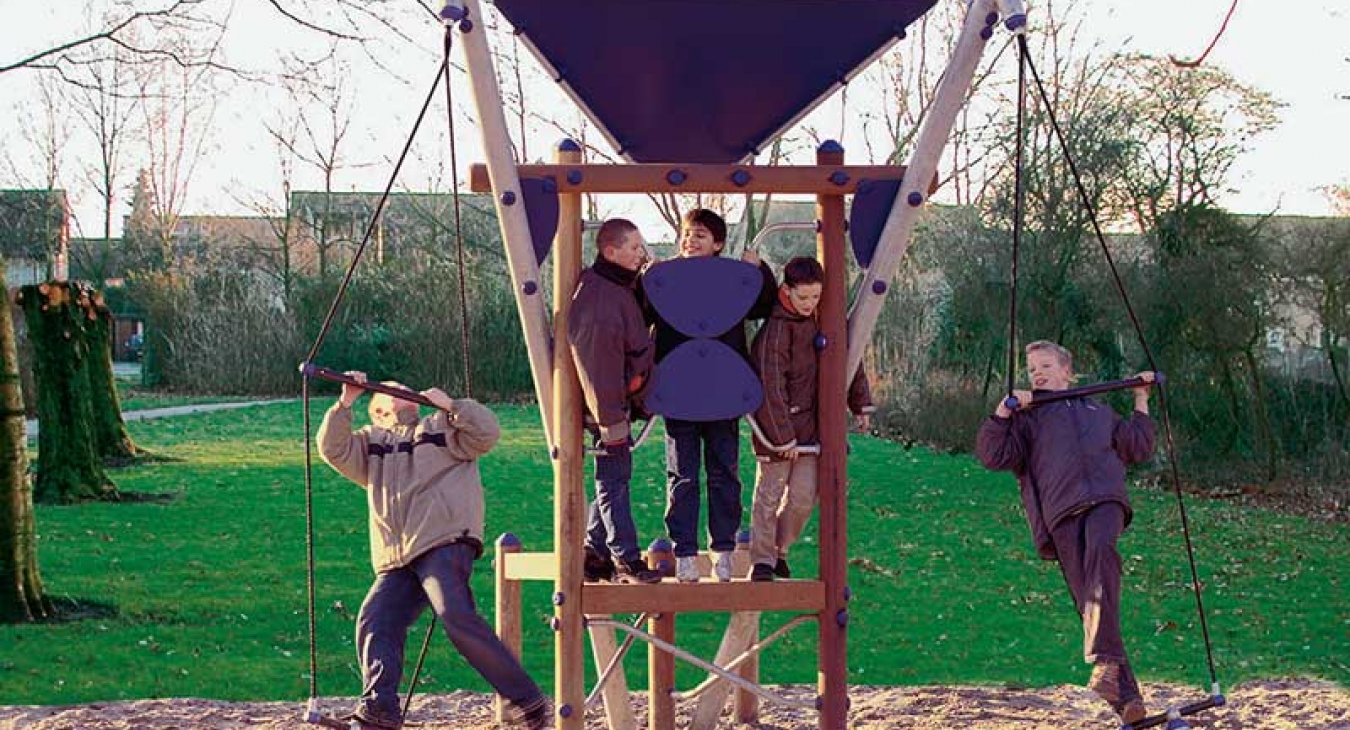 Throughout my nearly five decades of designing play apparatus and spaces I have been really gratified to see kids play on the results of my efforts. These days, however, I have begun to consider that perhaps design and play are antithetical to each other. I now suspect that I was seduced by the whole process of bringing an idea into reality and having it accepted in the marketplace.

Even at the start of my work I knew that kids played better in a natural setting than anything I could create. My justification for focusing on creating play apparatus was that kids spent much of their time at school and needed something that was fun and safe to play on. I also felt that it was possible to create experiences that were rarely available in natural settings. The first schoolyard structures were such a hit that I never looked back. The early wood structures I created gave way to metal and then plastic and then accessible features and the rest is history.

While I was instigating lots of volunteer built play structures in San Francisco and the Bay Area, Robin Moore was developing the Washington Environmental Yard. I loved the changes that he was able to accomplish there. The natural features that he was able to introduce and the level of participation and enthusiasm of the teachers and parents were phenomenal. I felt that the combination of active play apparatus, natural features, garden, and game spaces made for the perfect environment for kids in school settings. Indeed, an active play structure was added to the Washington yard to set a model that I was sure would be replicated everywhere.

Looking back over the last 40 years it is clear that we knew then what made for the perfect schoolyard, but that model never gained ascendancy. In hindsight it may be that there was insufficient value given to including nature in children’s spaces that we now have come to appreciate. Perhaps with the burgeoning interest in natural play the time has come to revisit the comprehensive model that Robin created.

But what about my contention that design, at least as the idea is typically construed, is antithetical to play? The primary role of a design is to create the form that follows the intended function. But what if the “function” is play? A child can turn an apple into a hot rod by just saying “Brrrumm” and pushing it around or calling mommy to say “I love you, Mommy!” on his apple phone. In the literature this is called “counterfactual” thinking; the apple is not a car. If I design a play car, then it is a car, and this essential creative process by the child can be thwarted.

My friend Tom Lindhart Wils, who founded and directed KOMPAN, used his considerable design talents to create abstract play forms based on the notion that these would not be too literal and would allow children to more easily imagine that a spring toy was a horse or a unicorn or a motorcycle.

The thrust of this Danish Modern design approach, if you will, is to simplify forms down to their essence. The question I have with abstract play forms is that there is no evidence that children respond to them more creatively than literal forms. We do know that children have longer and more complex play episodes in natural settings than in typical playgrounds, and nothing is less abstract than nature. I suspect that when it comes to play settings, rather than simplification, the more complexity the better.

Good design is all about asking the right questions. When it comes to play and playground design, we tend not to be honest about the first and most important question to be asked: “Who is the client?”

In my earliest work I can honestly say that the client was the children. As time progressed, however, the client became the manufacturer, then the park director, the risk manager, and finally the maintenance crew. Needless to say, the answer of what is a good playground design is VERY different depending on which one of these constituents is the real client. I feel the weakness of most playground projects is the idea that it is possible to satisfy this wildly varied collection of constituents, and by trying to please everyone, we end up with the cookie cutter blandness that is all too common on today’s playgrounds.

I’d like to suggest a new approach to play space design and look at the reality of how playgrounds are used today.

In the last couple of decades we’ve learned a lot about how communities use recreational spaces, so we must ask who will come and how will they use the play space?

We also know that creating a sense of place is essential for a successful and popular facility, and we should look for ways to preserve or create unique place identifiers.

These are just a few of the observations and questions I share with my clients before we even start the play space design process. My goal is to have those participating in the design process to begin to think “outside the box” that is, to not design with the shapes drawn on a plan and drop in equipment from catalogs but to visualize the play space as a four-dimensional living entity. These days with the ease of using 3-D rendering tools it is possible to provide excellent images of any proposed project.

The specific questions are not as important as the intent of the process. The best play spaces are those that people care about and that have been clearly created with attention to details that reflect respect for the users. The process of play space design is far more important than any other consideration. When the design process is inclusive, and dare I say loving, the opportunities for creative innovation and for creating enduring and endearing spaces blossoms.

Let’s get one thing straight: a play structure does not make a play space. Indeed I often advise my clients who are creating preschool play spaces not to install a play structure at all as these products tend to take up too much space and budget for what they deliver in benefits. There are three main consideration when implementing a design for children 6 years and younger.

Designing play structures for older kids is an entirely different matter. We all know the basics, play structures should be heavy on physical challenge and linkage, but beyond that we tend to be less clear.

Here are some of my suggestions:

It’s been 24 years since the ADA law was passed, and I find it hard to believe that many people think that ADA compliance is still a separate part of the design process. Throughout my participation in the citizen advisory process, consultations with manufacturers, and discussions with clients, I have been steadfast in my contention that we have gone about this in the wrong way. While I think that the goal of the ADA was and is noble, both the process and outcome are flawed.

To me the whole ADA process got started on the wrong path. In my experience the reason that the whole issue became so contentious and the resultant product so unsatisfying is that there were, and are, two points of view that have to this day been unresolved.

On one side of the argument there is the parent, let’s call her the “access” advocate, who wants to take her child to the playground only to find that she and her child can’t use the wonderful play setting that her tax dollars have been used to create. Her position is very simple: if you provide a service, it should be available for all, and by golly, if you have a slide in the park, then her child has the legal right to access it.

On the other side are those who we can refer to as the “inclusive” advocates, who do not have a specific child in mind that they want to accommodate but rather have the goal of insuring that all kids have the chance to play together.

As this drama played out, the process was driven predominately by access advocates. Logically they looked at existing legal standards for structures, we are after all talking about play structures, and basically applied the architectural standards with very minor adjustments. The results of the standards so created are heavily ramped monstrosities that ended up appealing to no one. For me the saddest sight in the world is a child who uses a wheelchair on the playground without anyone to play with.

More and more people are beginning to accept that the legalistic approach to design required by the current ADA regulations doesn’t produce an appealing play space. Fortunately, progressive designers are beginning to find ways to both comply with the standards and provide universal appeal.

Perhaps the most important innovation that addresses this issue is the development of ground level play structures. Perhaps a little background is needed here.

Historically all of the old freestanding monkey bars, jungle gyms, and cube climbers were ground level play apparatus; the only event that required elevation was the slide. When the notion of linkage was introduce, all that really happened was that those activities were attached to decks. While this innovation made for much greater appeal and benefits for kids, it created barriers for some.

The new ground level designs, to a large extent, overcome this problem. To my knowledge the 10 Plus product range that I worked on with KOMPAN was the first example of the ground level play idea. This was followed by KOMPAN’s Galaxy range brilliantly executed by the design team lead by Michael Laris. In short order, Landscape Structures and others brought out other versions of the concept.

While the ground level systems remove most barriers, they can’t solve the access issues for slides. The workaround that most producers have adopted are apparatus designs that kids can kinda-sorta slide on but they aren’t called slides.

Another play apparatus that helps us move toward universal design is the climbing net tower. The initial designs were based on pyramid shapes supported by masts. More recently we’ve seen many beautiful and complex shapes introduced. While a climbing net is not as challenging as real rock climbing, it is better than the typical walking-movement style climber. Best of all, nets are flexible and move with the players, which is fun. Or at least they were formerly. Many of the ones I’ve looked at recently are so stiff they might be made out of iron. What’s up with that?

I’ve made a number of perhaps controversial statements and asked some provocative questions and I’d close with some more questions that may be the most important:

Enjoyed the article. Looking back at the playground equipment evolution over my career I see your points very clearly. Our thought process on PLAY and what makes for a quality playground keeps evolving. There are a lot of boxes to check in the planning process. As they say, "the customer is always right." Except when they are not. Maybe we will run into each other again in the future. I will be teaching a CPSI Class in Berkeley in a couple of weeks and back in St Louis for the NRPA show.

I really liked your article. Thank you for your candid opinion. You really made my day.