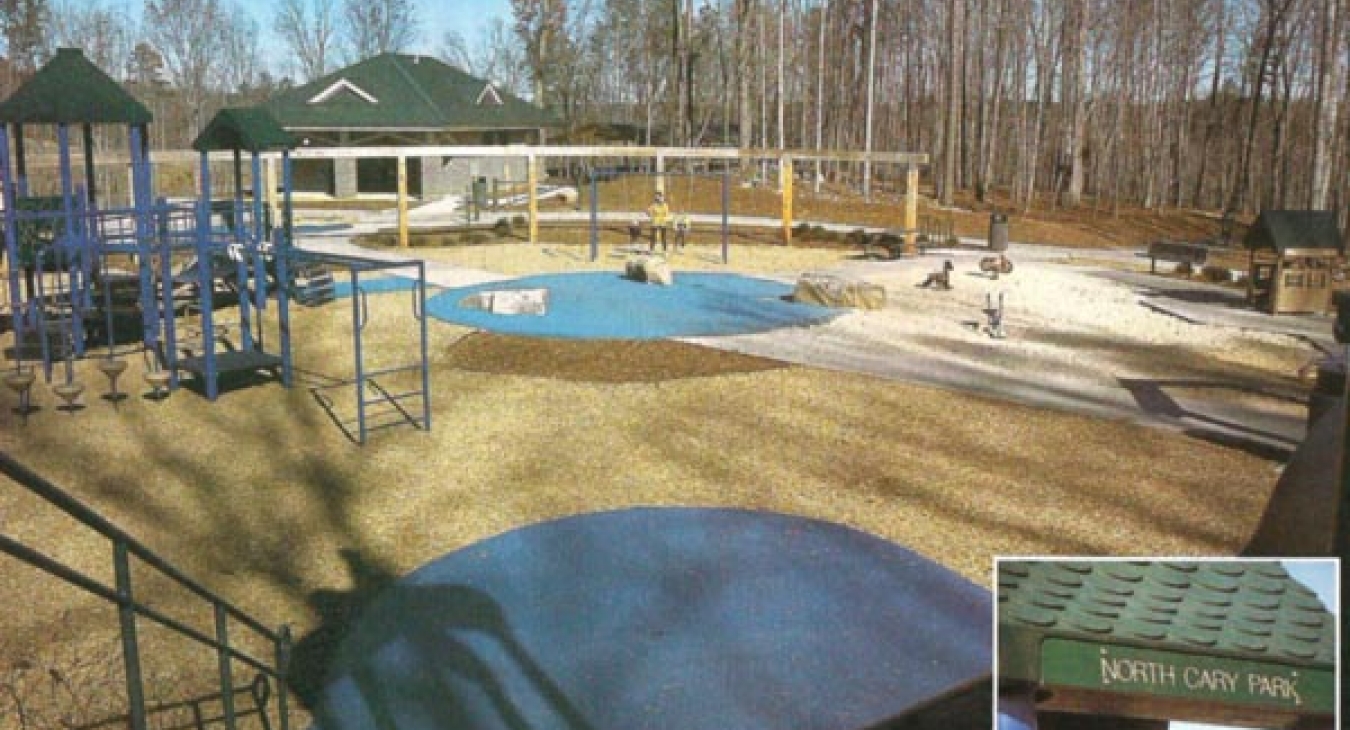 At one with the kids…and nature

This bridge was made for walking, but today it's serving a higher purpose as a heat source.

With North Carolina currently caught in a cold snap, 3-year-old Chloe Gurgel and 2-year-old Alexandria MacDonald have discovered that the black belt bridge at the North Cary Park playground makes for a good tanning bed. Although the air temperature is hovering around freezing, the skies are clear and the sun is beaming down on the black rubber. Taking a break from their activities, the girls lie down on the bridge and soak in the sun on one side while enjoying the warm surface on the other.

Three-year-old Chloe Gurgel gets a helping had from her mother while trying to get on a swing during a cold December morning.

It's a quiet morning in this suburb of Raleigh, N.C., thanks to the chilly weather.

"We normally have a play group today," says Chloe's mother, Kim, a Chicago native. "But the weather must have scared off all the southerners." It's likely to be one of the few times that such tranquility will be found at North Cary Park.

"Since it opened in November, it's been full almost every day with kids," says Russell Cox of Carolina Recreational Products. It was Cox, a sales representative for Landscape Structures Inc., who provided the playground equipment, but Mother Nature has to be given most of the credit for the overall appearance of the new park. Located on a heavily wooded slope, North Cary Park was carved out of and around the area's natural features.

"We wanted to do something interesting that took advantage of the topography: the woods and the hills," says Amy Mackintosh, a landscape architect with Mark Robinson and Associates in Wake Forest, N.C.

The two hillside slides are a unique feature of North Cary Park.

"And the Town of Cary was interested in doing the same thing. Some cities want to pack activities into every inch of a park, but that's not Cary. They wanted to take advantage of the woods and the hillsides. We really designed the whole park as a playground. We see it as providing all kinds of opportunities to play and explore."

Due to it’s elongated and spread-out design, North Cary Park does just that. While parents can keep their eyes on younger children who are playing in the main playground area, along hillside slide and a set of swings entice older children away from the center. A set of trails through the woods also suggests adventure, as do the two climbing walls.

"They're a challenge for young adults," Mackintosh says of the pair of bouldering walls. "And that's a group that's hard to serve. You want them to do things that aren't involved with antisocial behavior, but challenging enough to be fun, too."

Of course, the younger kids get their own boulders, as well. Incorporated into the center of the playground is a trio of huge rocks, each of which is surrounded by poured-in-place rubber surfacing. In addition to their aesthetic quality, the boulders provide a place for parents to sit while watching their kids, and add another play station to the park's already impressive selection.

Three large rocks were placed in the middle of a poured-in-place surface to add both beauty and additional components in the center of the play area.

"We were looking for a playground that was somewhat unique and fairly large in size because it was considered a community park and would be drawing people from all over the community," says Alice Webb, park planner for the Town of Cary. "We think it turned out well. It was integrated well with the site, and it provides a lot of play opportunities for the kids."

The play and swing set areas are covered with wood chips from Southern Pallet Co. out of Butner, N.C., and there's also a chunk of the center reserved for those wishing to spend some quality time with sand. A concrete walkway through the middle of the playground provides easy accessibility, while poured-in-place surfacing done by Safeguard Surfacing in St. James, N.Y., protects both slide areas from top to bottom.

Laying the concrete on the hillside provided a bit of a "challenge" for Polovick Construction, the Raleigh company contracted to build most of the $2 million park project, but thanks to "a lot of coordination" everything turned out as planned. "It's a beautiful park, the designers did a nice job," says Polovick's David Lanne. "And it's very functional. It's a very active park."

The two hillside slides were custom-built by Landscape Structures for the park, and due to the nature of the slopes ended up nearly a dozen feet in length, three or four feet longer than LSI slides built off of a raised play structure.

The dominant feature at North Cary Park is a PlayBooster play structure from Landscape Structures Inc.

"That's the first time I've done one," Cox said of the hillside slides. "They turned out great. The kids love 'em. They love how long they are. When I've went by, they've seemed to be the biggest hits of the park. Kids were constantly sliding down and then going right back up the stairs."

In addition to the PlayBooster system and pair of arch swing sets (one with full-bucket seats), Landscape Structures also installed a clubhouse, two spring riders and a pair of SuperScoops.

But while his older sister rushes from one apparatus to another, 1-year old Charlie Gurgel finds life on the beach to be pretty good ... even if it is only 30 degrees outside.

"Sand. They like sand," says Kim Gurgel, "It's not what I like as a parent, but sand's always a big hit. Especially with the little guys."