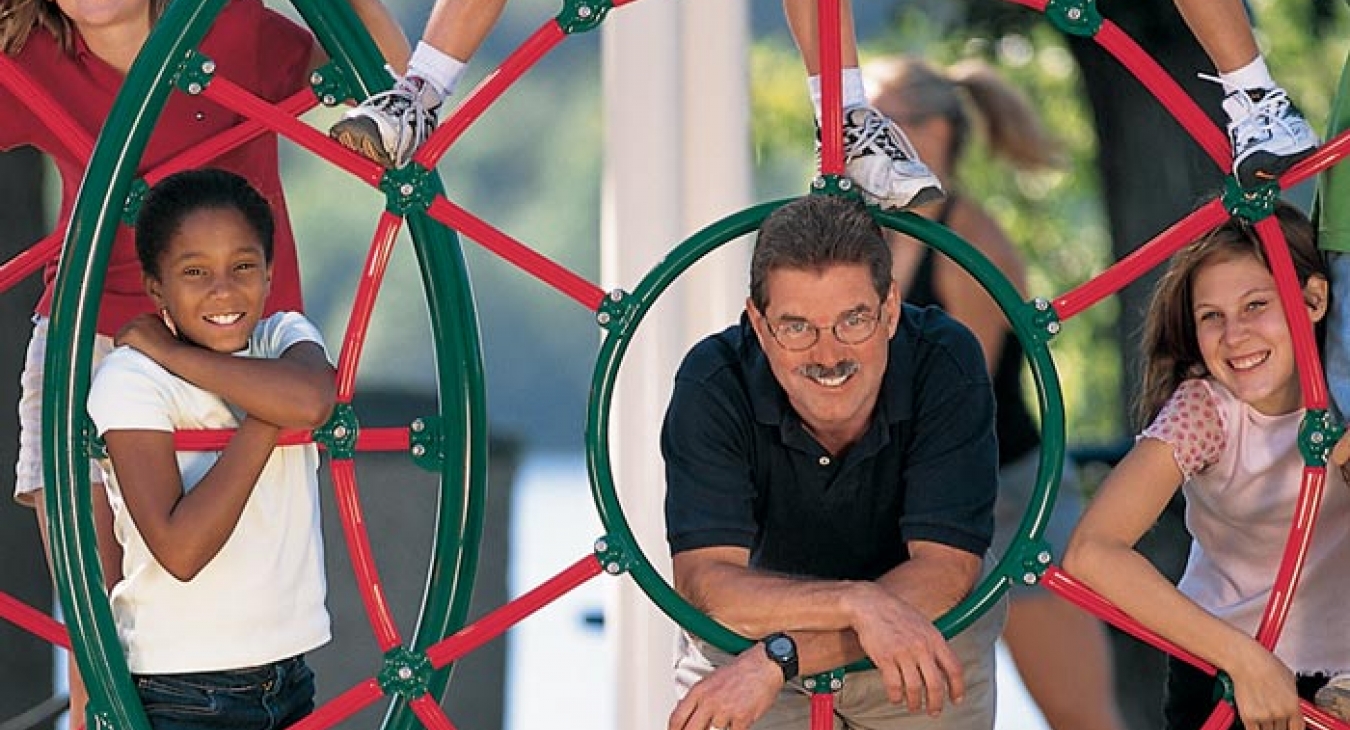 Steve King’s wheels are always turning. No matter where he is or what he’s doing, King sees possibility all around him. The father of continuous play concept never stops looking for new ways to make playgrounds safer, stronger, and more enjoyable for children.

While you may not know it, King’s ideas and concepts on the continuous play are evident in almost every play structure made today.

In the mid-1960s, while studying landscape architecture at Iowa State University, King ‘s senior design project was focused on determining the best way to develop a small patch of green space for a suburban housing project.

“I developed a concept of connecting various play components together to form a continuous play opportunity for kids,” said King. “It was a way of saving space while encouraging decision-making and interaction among kids—an important ingredient in a child’s development.”

Little did he know the concept he developed during the course of that college assignment would change the face of the playgrounds forever.

Continuous play moved playgrounds into the next century by eliminating separate structures for the different play elements and combining swings, slides, tubes, bridges, poles, etc. into one structure…in other words, playgrounds as we know them today.

In 1969, while King was working for a planning and engineering firm, the city of Minneapolis installed the first wood playstructure based on the continuous play concept. This wooden play structure stood for more than 20 years.

In 1971 King and his wife, Barb, applied the concepts of continuous play and started Landscape Structures Inc. It was hard, ambitious work for the young couple—selling and designing play structures by day, installing by night…frequently putting in 24-hour days.

Barb was still working for the Pillsbury corporation, but in 1973, the company closed her department, and she became LSI’s second employee without salary.

At this point, LSI was in serious financial trouble. Even with the help of two SBA loans, the Kings were forced to sell half the business to a venture capital organization in 1976.

“I still remember a quote from one of the many bankers that turned us down,” says King. “He said, ‘Steve, you have more guts than brains.’ At that point, I thought he was probably right.”

But the Kings didn’t give up on their dream.

“We knew the possibilities; we just didn’t have the money to realize them. We figured 50 percent of something was better than 100 percent of nothing.”

Since that pivotal moment, LSI has flourished. Eventually, the Kings were able to buy back the venture capitalists interest—at more than 100 times their original investment.

Steve and Barb King weren’t satisfied with simply having a playground manufacturing company. Their vision was to produce innovative new play components that would both challenge and inspire children.

King was the first to realize the potential for PVC coating. His concern for cold and heat retention by metal surfaces on play structures led him in the search for a material that would be tough enough to withstand the abuse that children can put on a playground and safe for children in the cold of winter or heat of summer. In 1981 LSI developed TenderTuff, a PVC based coating, for use on decks and handholds. In 1985 LSI came out with Permalene panels and in 1999 Super-Durable Powdercoat Paint.

Over the past 32 years, Steve and Barb King have directed the growth of Landscape Structures into one of the largest playground equipment companies in the world. Today, the company employs more than 400 people, has nearly 400,000 square feet of manufacturing and distribution facilities, and has installed more than 50,000 playgrounds worldwide.