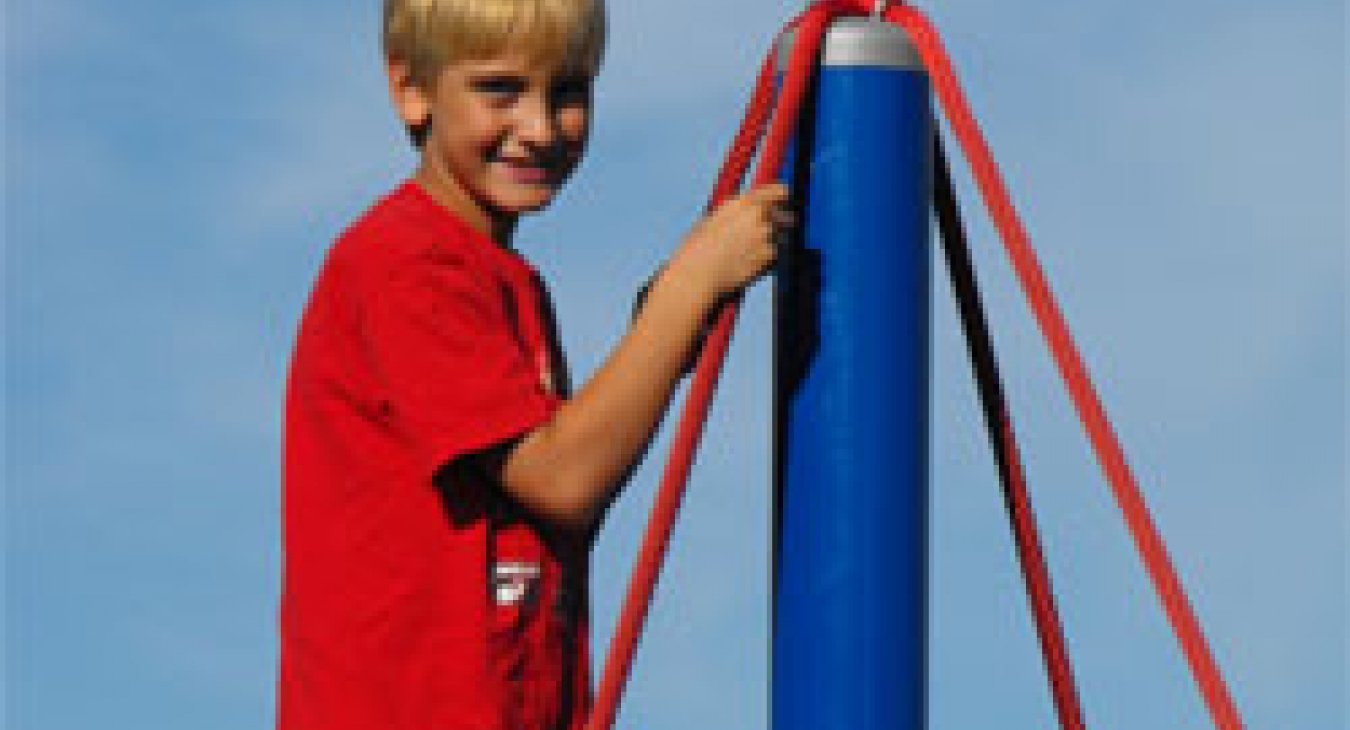 Yesterday my son and I happened upon a large park in our town. His immediate focus was about the group of kids gathering in the open space for boffing, “fighting” with padded swords, shields, and spears. We stopped and he found out they meet there every Tuesday at 4 for playacting fun. My thought? This is great kid-directed play using the grass fields that covered most of the park.

I then surveyed the rest of the park with its typical soccer goal nets and basketball hoops. In one corner there was an area of swings and the modular colored play equipment with tunnels, slides, rings, decks, and a sway bridge. Even though nothing was higher than about 6 feet, my 19 year old son wanted to test it out for me. His report after about 10 minutes? There were some fun features, but it was obviously for younger children. He did really “dig” the pivoting sand digging tool, except it didn't really move the sand to allow him to create something.

Looking at the whole space I was wishing there was some play feature that was more challenging for the older aged “kids,” which could include parents, by the way. Something for individual older play – like some of the new towers and nets or a bouldering wall.

So, could playgrounds be boring? Yes. Do they have to be? Absolutely not. But perhaps that secret still needs leaking out to the adults – the “powers that be” who are planning and paying for playgrounds.

Sometimes I think the most interesting “ride” has been on the swinging playground pendulum that arcs between structure and adventure. This pendulum ride isn't in a vacuum, but rather it echoes society as a whole. As I see it, American play history began on both sides of this “great divide” with the gymnasium and the sand pile – one very structured and the other rather loose, decidedly untidy, and potentially adventurous.

The fact that the play and recreation style soon unified and tipped toward the structured side was a reflection of society's desire to shape the rising urban generations and the incoming immigrants into patriotic American citizens. Places were made for kids to play, but they were often structured both in activities, equipment, and hours of operation. And thus the pendulum was stuck on the structured side – at least through the World Wars and the Depression, times of “threat” when society was “circling the wagons” mentally.

Enter the era of the baby boomers and the sense of relief at having survived internal and external crises as a nation. As creativity started flowing, rockets and planes and trains and dinosaurs came out to play on the playgrounds. The new focus on kids as kids invited this “zoom” to the adventure side. With it came an expanding market for toys, the technological wonder of plastics, and a greater allowance for play both in time and money. As a society, adventures were also happening with the new post war abundance, the advent of suburbia, and the race for the moon.

And yet an undercurrent of fears was also growing with the ongoing “cold war” and the threat of the “red menace” of communism and socialism. On the playground these new fears focused on the safety of the rising generation, a precious national resource. Enter the studies and standards that stalled out the adventure swing of the pendulum. And what was the solution? A return to the former colorless, bare-bones playgrounds? No. We moved forward, but in a structured, modular way. The safer equipment was colorful and looked wonderful, but the adventure was gone and the kids weren't fooled.

Is it any wonder that when technology brought back adventure - albeit in a virtual, more passive form - the rising generation soaked it in and playgrounds became “ghost towns?”

At this point in our history journey, I think it is important to side-step blame - each side of the pendulum has had its pluses and benefits. For instance, the recent swing towards structure brought increased safety awareness and the importance of a more forgiving surfacing than asphalt - just as the previous adventure swing brought color and imagination to play. Both are features that remain and enrich the whole play experience today.

Also, it seems to me that the tendency of a pendulum to have less and less wide swings and eventually to find a point of balance between the extremes might be happening with playgrounds. Just as the kids have voted for adventure, the parents are beginning to allow risk back into play and outside recreation. It is possible that we are reaching a point of balance between structure and adventure.

More and more playground designs are melding adventure and safety. Witness the 30 foot pyramids of climbing nets, the new challenging shapes of climbing walls, and the thrill of zip lines. Dinosaurs have been joined by bears, pirates, and castles. Slides snake down hillsides or in trios or quad packs for social fun. Monkey bars twist in all kinds of directions, spread wide into domes of climbing, or corkscrew into ladders. And of course there is the whole challenge of the “hot lava” playground where you must play with everything without once touching the ground. Tunnels, bridges, balancing “acts” all play a part of this new generation of play. Boring? Not hardly.

Available? Not enough. Like I said, apparently the adults haven't gotten the memo. Too often they are doing the quick fix design that looks good on paper, needs little maintenance or supervision, costs less, and has a proven record of surviving without lawsuits. If it also promotes learning somehow, then they feel like they have died and gone to heaven. What's not to love? Plenty.

Since kids don't usually have much of a say in this process, they vote by their absence. These “eye candy” playgrounds often sit empty while adults scratch their heads and wonder why. Aren't they colorful? Promote learning? Safe? What's wrong with the kids these days anyways...?

While it is tempting to blame the kids, electronics, crime, and lawyers, the real answer, in my kind-of humble opinion, is in the pendulum swinging too far towards structure. Where are the kids going? Towards adventure. Could they actually instinctively know what they need? It is starting to appear so.

More and more studies and experts are realizing what adventure does for kids' growth and development. Risk is no longer a “four letter” word, but rather a component that is now viewed as necessary and starting to be planned back into playgrounds. Some of the adventure components in the electronic virtual world are being incorporated into outside play as well. Instead of fighting the digital world, which is here to stay, it is beginning to be utilized in the next generation of games such as GPS phone games or cache hunting.

And safety? It is still there. In fact, digital advances could help calm the over-protective, though well-meaning parent through smart phone technology and GPS tracking.

Obesity? Bring adventure back into the equation and natural movements will tip the scales towards health.

Learning? This adult race to achieve is still a strong pull on the structure side, but even here the research is showing that down time is not lost time – rather it is process time. Kids are very tricky. They may look like they are having fun and being carefree, but in reality they are still learning and correlating knowledge. If only there was a way to market that multi-tasking skill... that carefree energy.... but wait – there is. Through playgrounds.

As the back and forth tug of war between structure and adventure begins to slow and each side can see the benefits of the other, a middle ground of safe, anything-but- boring “adventure grounds” just might become the norm and boring playgrounds will only be in history books.