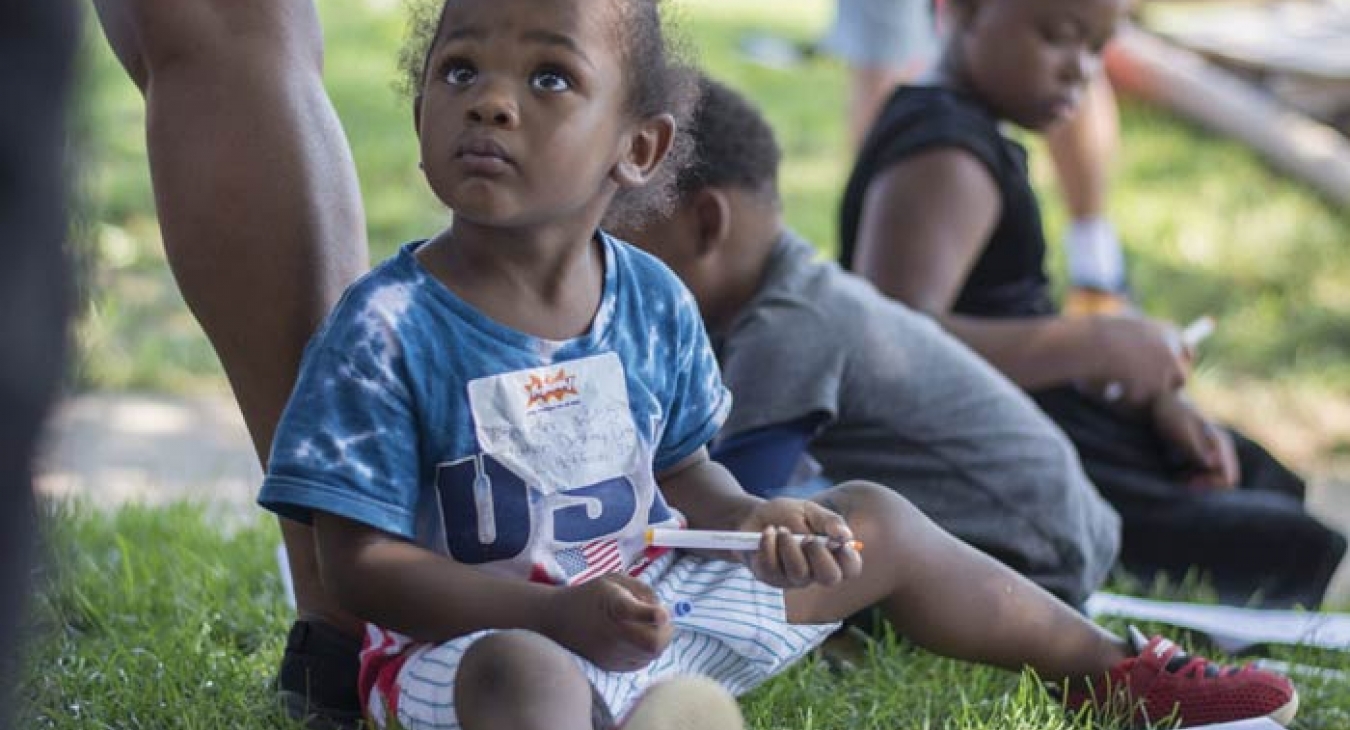 A Win-Win for Cities & Kids

The well-being of our communities begins with the well-being of children. KaBOOM! believes that play is a critical part of childhood, and key to a child’s ability to thrive. This is especially true for kids growing up in under-resourced urban communities. And, like many urban housing agencies, the Housing Authority of Baltimore City(HABC) prioritizes decent, safe, and sanitary housing for its residents. This should include playspaces for its youngest residents, but HABC’s federal resources are constrained by decreasing funding allocations, and they have no dedicated funding source for playspace creation and maintenance.

So, earlier this year, KaBOOM! began working with the HABC to ensure that every kid growing up in Baltimore Housing has an opportunity to play. Through this unique public-private partnership, KaBOOM! brings its expertise in play, a deep understanding of community engagement and private resources to support well-deserving communities. HABC brings its interest in resident safety, community assets, and public funding to the table. Together, they are working to bring first-rate, innovative playgrounds and playspaces to kids who need it most in order to have a positive impact on Baltimore’s youngest residents, their families, and the community as a whole. 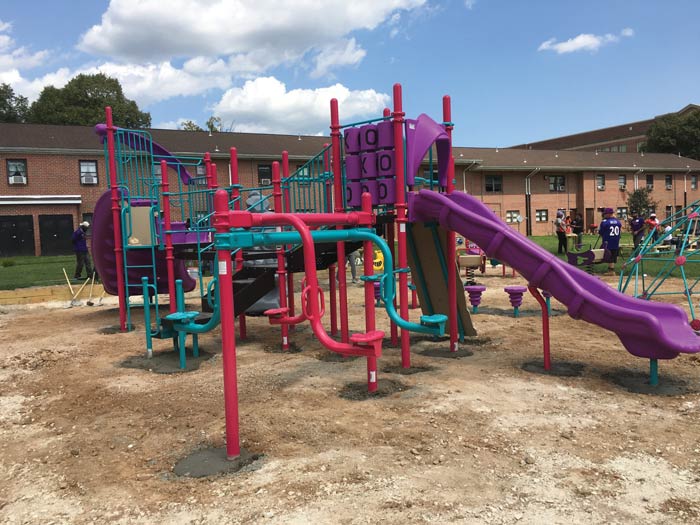 We know that access to balanced and active play can contribute to healthy development, support growing bodies and minds, and provide vital opportunities for kids to solve problems together. If it is not safe for kids to seek out places to play in their surrounding neighborhoods, then we must bring play to where kids are. Unlike other kids, research shows that kids growing up in low-income neighborhoods often do not have the bandwidth or ability to stop by the local playground (or, worse, one may not exist in close proximity to their school or home). This is why ensuring that these kids have access to play in their own communities is particularly important. By building playspaces in residential developments, KaBOOM! and HABC are removing barriers to play and making it easier for kids to get outside, all within eyesight and earshot of parents and other trusted adults. 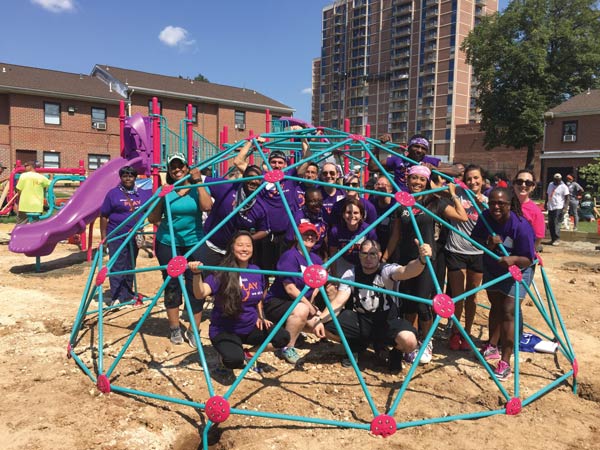 Last summer, the kids at “Magnificent” McCulloh Homes, an HABC site, got their chance to think big –designing their “dream playground” to be built right outside their windows. Just a few short weeks later, more than 200 volunteers came together to build that playground, from the ground up, on the empty lot in the McCulloh Homes housing complex. Why is this such a groundbreaking accomplishment?

McCulloh Homes is a multi-family development in West Baltimore that houses more than 500 families, including several hundred children. HABC residents are important members of the cultural and economic fabric of Baltimore City, and everyone in Baltimore is connected to HABC, even if they don’t think of it that way. They are working hard to provide their kids and families with a bright future –and a part of this is access to places to play. But prior to the playground being built at McCulloh, kids who live in the community had no options for play, other than a flat grassy area at the center of their complex. Neighborhood school playgrounds are closed after school hours and there are no other affordable, after-school activities available nearby. Crime is prevalent in the area and parents did not feel safe sending their kids to other play areas in surrounding neighborhoods. 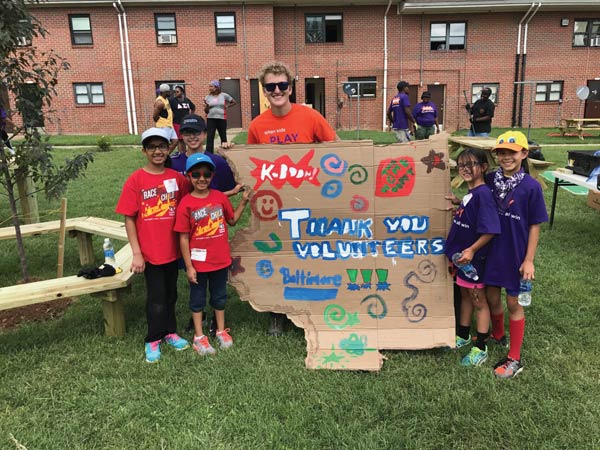 In an effort to build community pride and bring play to all kids living in the neighborhood, the Housing Authority of Baltimore City partnered with the residents of McCulloh Homes and KaBOOM! to turn an empty space into a fun, engaging, and safe place to play.

We know that perceptions of safety can be a major barrier to kids getting the play they need in low-resource, urban areas. There’s evidence that if parents believe their communities are unsafe, then kids are less likely to play outside. Community‑built playgrounds become social hubs for families to gather, socialize and take care of the playground. With this increased community cohesion, more eyes on the street, and positive activation, there can be a direct impact on the reduction of crime. 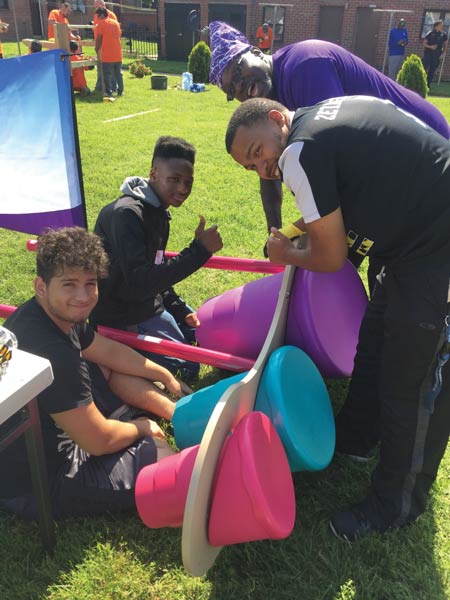 There is a lot of hope for the new McCulloh Homes playground. Playspaces are not only essential for kids’ healthy development but also critical to creating safe, connected communities. Social cohesion within a neighborhood, combined with residents’ willingness to intervene on behalf of the common good, accounts for more than 70 percent of the variation among neighborhoods in levels of violence. Research has shown that strong social networks correspond with significantly lower rates of homicide and alcohol and drug abuse. When people know and interact positively with their neighbors, they foster mutual trust and reciprocity, leading to the development of social norms that make community violence unacceptable and reinforce parents’ efforts to teach young kids nonviolent behavior. KaBOOM! playspaces foster these very types of interactions, building social cohesion and increasing safety.

KaBOOM! and HABC are already working to create more opportunities for kids living in Baltimore Housing –including playgrounds –in the years ahead. Because when kids play, the whole community wins.

Hello, Carlos! Check out our Professional Spotlight Directory  https://www.playgroundprofessionals.com/spotlight for some providers as well as organizations such as KaBoom!

Hello
I am a Wish Manager for Make-A-Wish Arizona working on a backyard sensory wish, I am looking for guidance where to locate affordable pieces and or ideas.
Best
Carlos Inostroza
602-343-9432