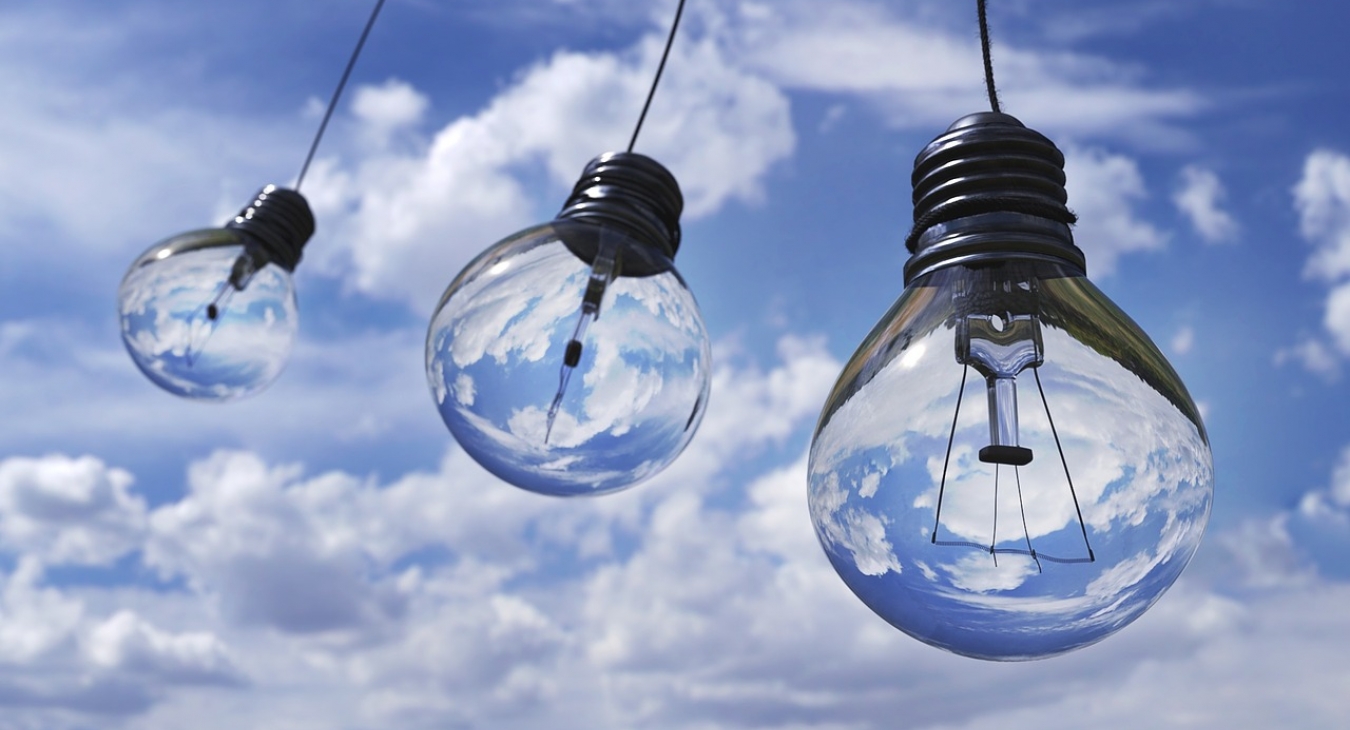 In 1988, the United States Consumer Product Safety Commission (CPSC) conducted an in-depth study of playground-related injuries. Published in 1990, it provided the authoritative basis for safety guidelines in the Handbook for Public Playground Safety (1991, revised 1997)

as well as ASTM F1487: Standard Consumer Safety Performance Specification for Playground Equipment for Public Use (1993, revised 1995, 1998, 2000). The findings of this seminal study also had a major impact on the development of safety standards for playground surfacing (ASTM F1292), soft-contained playground systems (ASTM Fl 918), and home playground equipment (ASTM F1148). The impact of this study can hardly be exaggerated.

The CPSC has just released a sequel to this highly influential study that has the potential to fine-tune and redirect current playground safety campaigns.

The new study, which examined playground equipment-related injury data from November 1998 through October 1999 and playground-related deaths reported to CPSC from January 1990 through August 2000, is a significant supplement, as well as, an extension to the first study. It offers opportunities to examine playground injury data in three ways: (1) chronologically-to identify trends or patterns either of change or consistency; (2) comparatively-to note differences in injuries and fatalities on playgrounds between the 1988 and 1998/99 studies; and (3) topically- to examine new data obtained in the latest study that was not collected in the first one.

A preliminary report of the new study revealed a four-year decrease in the NEISS estimates of playground-related injuries from 1992-1996, then an increase until in 1998 the estimate was slightly more than that for 1990. The decline might be attributed to initial efforts to increase playground safety by removing unsafe equipment. (Example: the 1995 CPSC public call to remove 10,000 animal swing units that had caused a reported 42 serious injuries and two fatalities.) Early results of the NPSI Certified Playground Safety Inspector Program, heavy emphasis to provide protective surfacing on public playgrounds, and safety efforts by IPEMA and individual playground equipment manufacturers. The increase in playground-related injuries from 1996-1998, however, needs an explanation.

Falls Increase As Injury Cause On Playgrounds

Most Falls Are From Low Heights

Since falls now appear to be the cause of approximately four of every five injuries on playgrounds, the new CPSC findings on fall-related incidents are very helpful. On public equipment, 78 percent of the injuries involving falls to the surface occurred from heights of 72 inches or less, while almost half (47 percent) involved falls from 48 inches or less. On home play equipment, 79 percent of fall injuries occurred from 48 inches or less. Thus it would appear that advocates of a maximum five-foot (60 inches) equipment height have little safety justification in the new document for their espoused height limitation.

Causes Of Falls Are Identified

The new CPSC study found that 40 percent of playground falls occurred when children lost their hand grip on the equipment-usually on climbing bars or swing chains. Three other causes of falls were noted: feet slipping or tripping (16 percent-most often on slides); as a result of jumping or dismounting (14 percent- most often from swings); and as a result of losing balance (10 percent most often on slides).

It is comforting to know that the ASTM subcommittee for public playground equipment is currently examining the distinction between handgrip components and handholds. There are presently just two safety criteria for climber rungs and handgrip devices for upper body equipment- an acceptable diameter range and a restriction  against twisting or rotating on its own axis. In light of the finding that so many children fall because of lost grip, it may be useful to consider other factors, such as surface texture and shape. There is also justification for more emphasis upon handgrips during safety and maintenance inspections.

There is a recognition that "public playground equipment" may be located in a variety of settings by providers other than park agencies. In fact, analysis of playground injuries that occurred between November 1998 through October 1999 revealed that most public playground injuries happened on school grounds (45 percent), followed by public parks (31 percent). Commercial day-care providers reported 1 0 percent of the public play equipment injuries during this period. This is logical; most public play equipment is found in the first two settings.

There needs to be more emphasis on playground safety by schools, including safety audits, equipment upgrades or replacements, routine safety inspections, a basic maintenance program, and training in playground supervision.

Since the first CPSC study in 1988, groupings of free-standing play equipment on the playground are being replaced by multi-use structures (also called "composite play structures").

The new CPSC study probed into the generic category of "climber" to ascertain that, in three injury cases out of four, specific types of climbing devices were reported as involved. Where these were reported, 60 percent of the injuries on climbers occurred on horizontal ladders. An additional 6 percent involved "hand-over-hand" overhead rings/triangles, and 2 percent involved arch climbers. The CPSC thus concluded that over two-thirds of the injuries on public climbing equipment involved overhead equipment. Not surprisingly, 86 percent of these injuries were the result of falls. There seems to be a message here-public overhead equipment pieces need further examination to determine why so many injuries are occurring as a result of them.

Safety Focus Needs To Be On Causes Of Fatalities

Safety experts agree that the first objective is to eliminate the most dangerous hazards, those the NPSI call "Priority One Hazards". These hazards may cause a fatality. From January 1990 through August 2000, the CPSC received reports of 147 deaths to children younger than age 15 that involved playground equipment, an average of more than one death per month. In the 128 incidents for which location was reported, ninety (70 percent) occurred in home locations and thirty-eight (30 percent) occurred in public locations. Over half of the deaths in each setting were to children 5 to 9 years old-early school-age children. Home play equipment claimed the lives of another 28 children, these being 2 to 4 years old. The CPSC analyzed fatal incidents by hazard rather than by type of equipment since the specific type of equipment involved was not always identified in the death reports. The most frequent cause of death on playgrounds was by hanging, i.e. strangulation (84 deaths). Distant second and third causes of playground deaths were falls (31 deaths) and tip over or collapse of equipment (24 deaths). Only three deaths were attributed to head entrapment and three to impact with a moving component of playground equipment.

Presently, a large portion of playground safety inspector training is spent teaching participants the proper use of entrapment probes and templates and protrusion gauges. This new data may suggest more training should be given to: (1) identification of entanglement hazards and means to eliminate non-original ancillary or supplemental additions to play equipment such as; attached ropes, leashes, cords, etc.; (2) fall prevention (discussed earlier) and fall injury rectification; and (3) field testing of structural integrity. The process of examining play equipment for these hazards may not involve clever tools or instruments but may be more productive in death prevention. There must be an increased emphasis on this principle three fatality causing conditions in safety inspections and preventive maintenance programs as well.

The 1988 CPSC playground injury study had an enormous impact on today's safety standards and practices. The 1998/99 sequel may impact future safety guidelines, standards and training even more than its predecessor. There is much more in the new CPSC Special Study: Injuries and Deaths Associated with Children's Playground Equipment that can be reported in this brief overview. It is obvious the impact of this study, like that of its predecessor, can hardly be exaggerated. 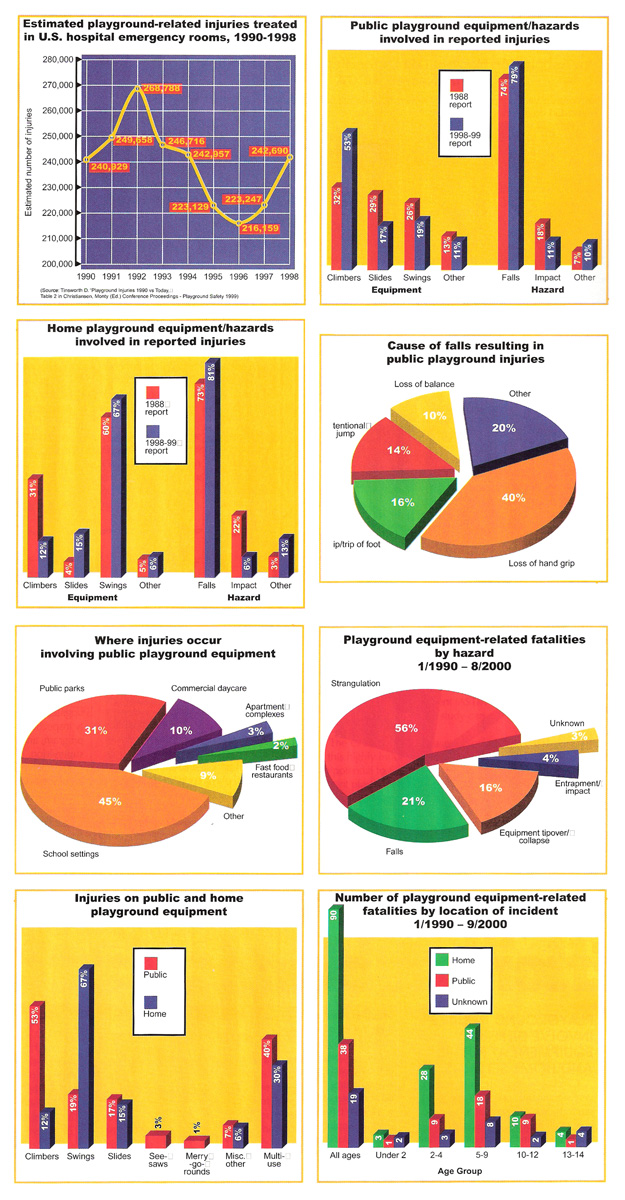