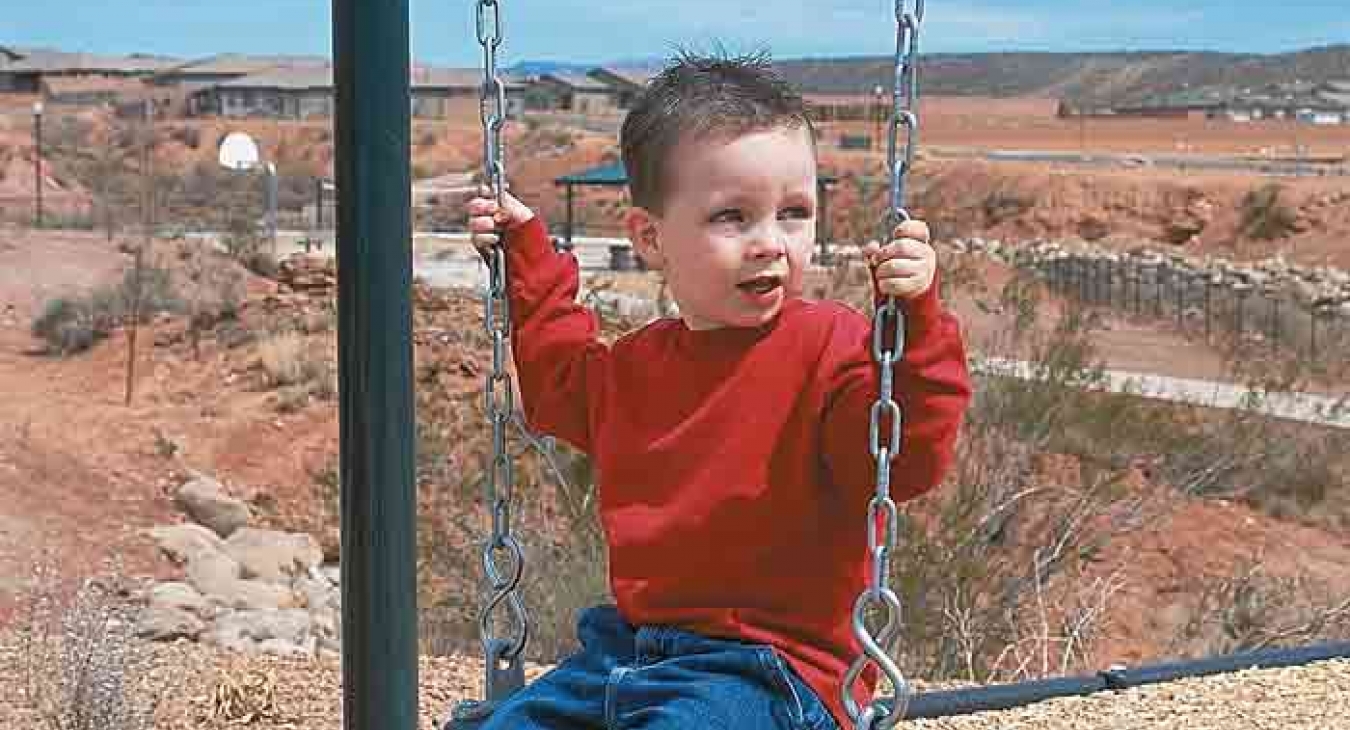 For the youngest, swinging means feeling snug and a pleasant tickling in the stomach.  Older children play together on the swing, talk, sing, and push each other.” (63) Noren-Bjorn, 1982.

Swings can be used by children (and adults) of all ages. They have been around for thousands of years and have been depicted in art objects from every continent. Paintings of women swinging were popular in the late 17th century as depictions of leisure and idleness. Swings are also one of the most popular items of playground equipment.  Children love the motion of swings. The pendulum action, gravitational force and speed physically experienced while swinging quickly translate into feelings of falling and flying—sensations that inspire imaginations. These things truly are not possible with any other type of playground equipment.

Sadly, swings on playgrounds have become controversial and are rapidly becoming extinct in public forums. Preschools in California have removed all swings from their playgrounds; many communities considering re-designing their playgrounds are opting to not include swings in the plans at all. One of the major reasons for this trend is the logistics of swing-sets. Swings take up a lot of space on the playground but accommodate only a few players. Currently an 8-inch single bay, two-seat swing requires over 700 square feet of space on the playground to allow just two children to swing.  Smaller playgrounds just do not have this much space to spare, so swinging is sacrificed.

In addition to logistical issues with swing-sets, there are safety concerns. The pleasure that swings bring to children is also their largest risk factor. Swings rated second only to climbers in the number of injuries on public playground equipment (about 20 percent of injuries) and are ranked first in backyard playground equipment injuries (about 66 percent) where there is rarely any fall surfacing. Also, children themselves cause many of the injuries through risk-taking behaviors: they compare their abilities against a friend’s, explore personal swinging competence, and jump off moving swings. 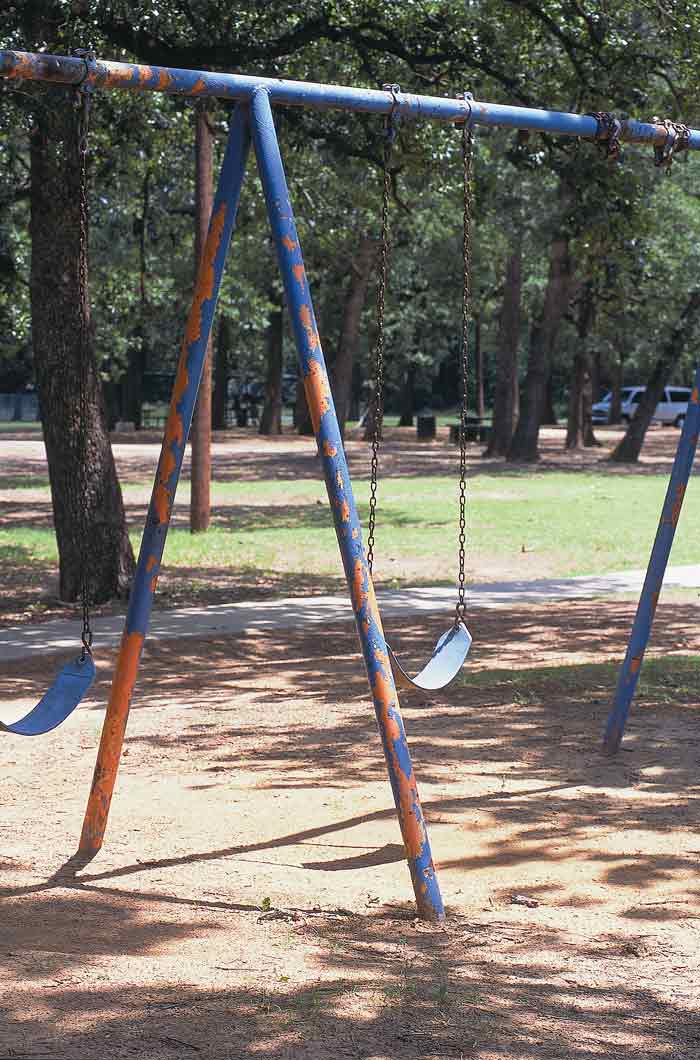 Although these concerns may be more a result of the popularity of swing-sets and frequency of swing use, it is important to be aware of the hazards associated with swings:

Swings should be an important element of playground design for the many benefits they provide to children.  In fact, humans may actually be born to swing.  The motion of swings is very important for the development of balance and body awareness.  Body awareness is divided into the proprioceptive system, which gathers information from the muscles and joints, and the vestibular system, which gathers information from semicircular canals in the inner ear.  As the body moves through space while swinging, it learns to adapt to the changes in forces on muscles and joints. The vestibular system is influenced as the head moves through the vertical, horizontal and diagonal planes.  Swinging provides stimulation to both of these systems, subsequently helping children to develop balance and coordination.  Furthermore, the integration of the senses is an important aspect of human development. Children who have difficulty with sensory integration are often treated with swinging therapy.

Swinging can also have a natural relaxing function. The raphe system of the brain (located in the brain stem) is associated with sleep and levels of arousal.  These areas of the brain use neurotransmitters like norepinephrine and serotonin to raise and lower levels of arousal.  Abnormally low levels of serotonin are associated with anxiety disorders—swinging can help keep it at a balanced level because the gentle rocking motion stimulates the raphe system, releasing serotonin. This relaxes the body and leads to sleep. Infants who are gently rocked fall asleep more rapidly due to this stimulation of the raphe system.  Researchers are using this neurological data to develop swinging incubators for premature infants that rock them slowly, allowing them to sleep longer; this, in turn, leads to increased growth rates. 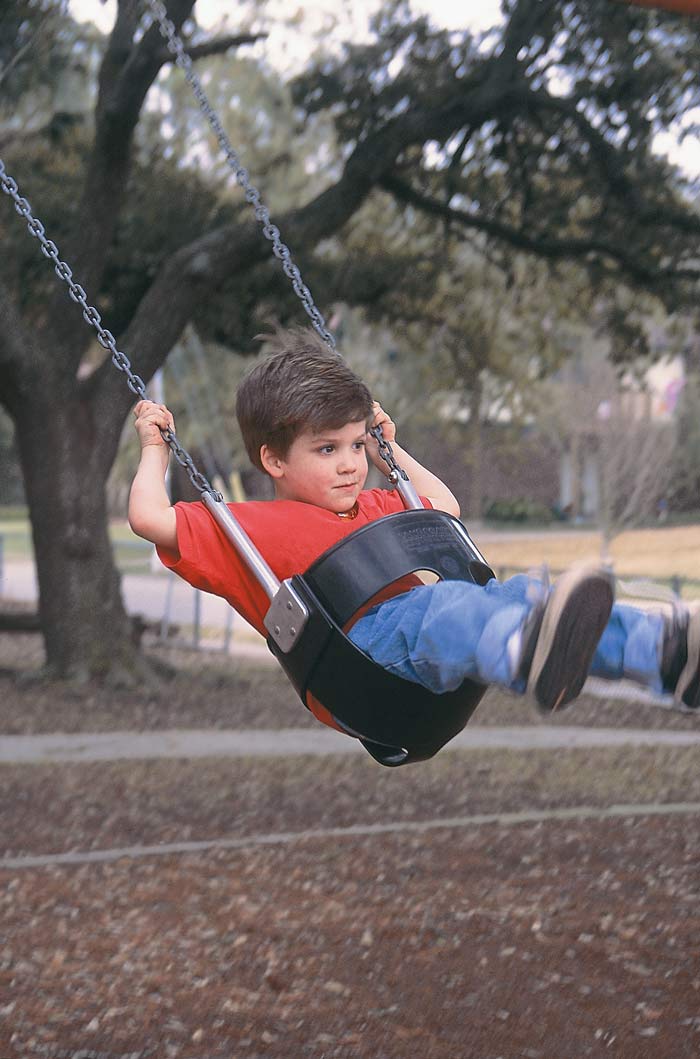 Finally, swinging offers significant opportunities for physical development. Beginning with the earliest use of swings, when children are begging with “push me!” requests, their bodies are acquiring and developing motor skills. Through gradual understanding of the swinging movement, children develop body movements that are necessary to maintain the motion. Once these are developed, work on the coordination of body movement begins; refinement, extension, and elaboration of the basic swing movements (e.g., pumping) quickly follow. Through swinging experiences, children become masters of their bodies in an “above ground” environment.

Swings should be an important aspect of playground design.  Although they require a large amount of space and (like all playground equipment) they are associated with a number of injuries, they are also very popular with children.  Having exciting and engaging playground equipment brings children to the playground where they can exercise and gather for socializing. While they are there, they can stimulate their vestibular and proprioceptive systems and enjoy themselves all at the same time.