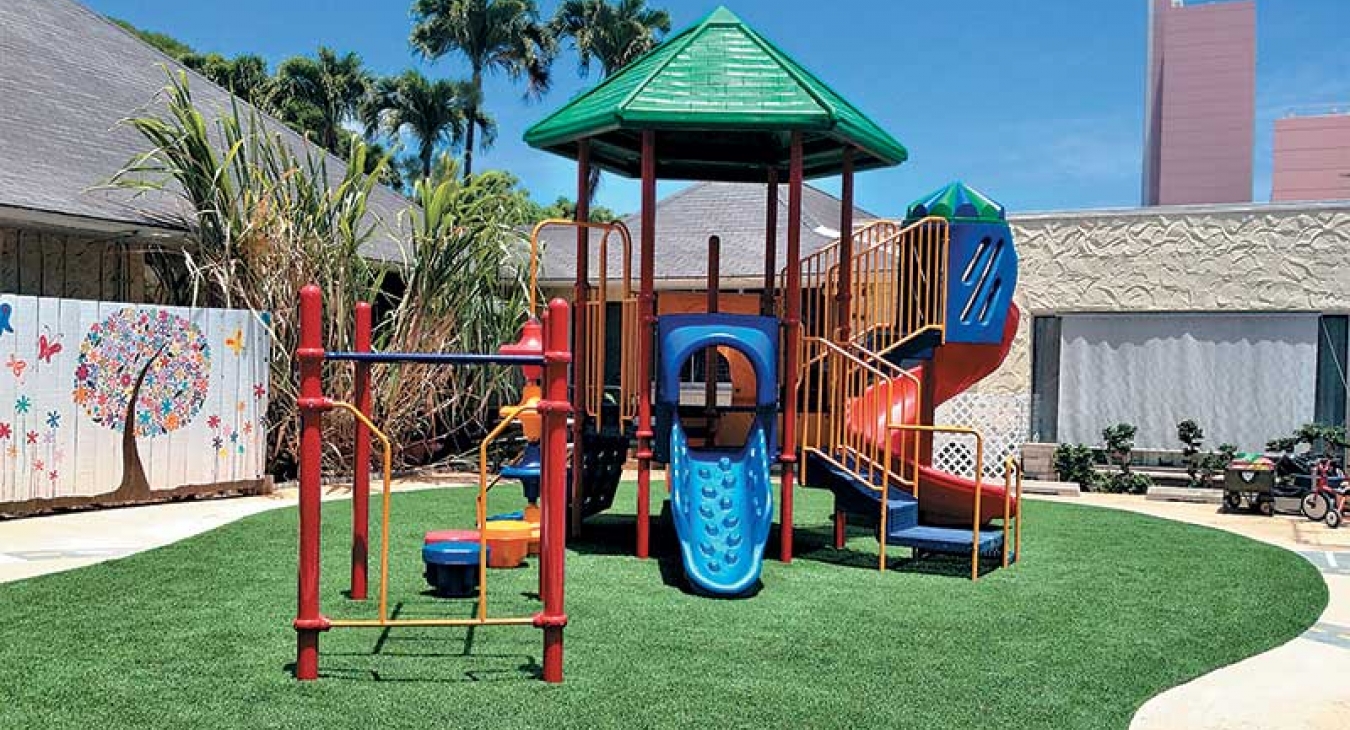 We’ve all seen the headlines about childhood obesity. From the Centers for Disease Control and Prevention estimating that obesity rates among children under age five have doubled over the last two decades to speculation pint-sized reality star Honey Boo Boo’s diet is dooming her to a lifetime of bad health, no one disputes the fact that there is a problem. But the fault doesn’t lie with poor eating habits alone. Kids, particularly younger ones, need to become more active.

That is why a growing number of preschools and day care facilities are creating more outdoor play opportunities for the children they serve. Playgrounds are particularly critical to this effort as they need to promote higher activity levels while keeping kids safe from the ground up.

Just ask the Hoaloha Kai Montessori School in Honolulu, HI, a private school that serves children from the age of two months through sixth grade. A significant portion of their students are between three to six years old. Administration recognized that encouraging kids to play outside was an important part of their development along with strong learning programs. But the school faced the challenges of limited space and equally limited funds. Initially the school compromised by converting the back parking area into a playground using a wooden freestanding unit over one-inch foam padding which was not up to any ASTM or CPSC guidelines.

Over time, the challenges with the play area became more apparent. It did not accurately reflect the excellence of the school’s innovative curriculum. Only a small amount of students could use the space at once. A fundraising campaign was launched to create a new playground to enhance student activity levels. Realizing that synthetic turf would provide the best surface solution given the area limitations and maintenance needs, the administration turned to NyLawn, the Synthetic Turf International (STI) distributor for Hawaii, to construct a new, safer playground. The goal was clear--design a synthetic turf surface that would create more play value, aesthetic appeal and make the most of the limited surface area.

“The play space required some much needed improvements to bring it up to a safe and professional looking facility,” Rory Otto, president of NyLawn, said. “We wanted to create a beautiful playground that protected the ‘Keiki,’ which is Hawaiian for kids.”

Maximizing safety was the top priority. NyLawn came up with a Miracle 2-5 YO custom structure with a curved edge Fall Zone and an exciting color scheme. The equipment’s fall height was determined by the spiral slides platform at approximately 6-foot-2. They used a 2.25-inch thick recycled foam underlayment with an STI product and sand/rubber infill, creating a critical fall height of more than eight feet. Selected to ensure the surfacing exceeded the required fall height well into the life of the equipment, the system followed ASTM 1487 and CPSC Guidelines so the perimeter met or exceeded the Use Zone of the equipment as well.

The company also incorporated an original tricycle race track element from the previous install into the design.

“I thought more along the line of a putting green installation where as we take a rectangular shape and make it feel and look more natural and less geometric,” explains Otto in describing the playground project. So a race track was painted around the perimeter for the Keiki to ride their tricycles on.

However, the school didn’t stop at that point. After seeing the conceptual drawings for the playground, Hoaloha asked NyLawn to tackle a younger children’s area. Located in a nice shaded area under a tree and palms, unfortunately the tree coverage didn’t promote the growth of natural grass. Otto envisioned a perimeter Keystone Retaining wall that came to the fence line and buried an old rock wall that caused a hazard. Once again using STI’s products, NyLawn focused on creating a safe outdoor area that also enhanced curb appeal.

The reaction from the Hoaloha Kai Montessori School community has been incredibly positive. Today, students eagerly look forward to playing outside and parents are equally thrilled by the safe synthetic turf surface that protects their children.

“The new synthetic grass play area and wall has added to our curb appeal and prompted families to inquire about our school,” noted Hoku Chong, director of admissions at the Hoaloha Kai Montessori School. She also felt that one of their students expressed it most eloquently of all in stating “our courtyard is much more safe and awesome now.”

Beyond the transformation of their school’s playground, Hoaloha Kai Montessori School hopes to inspire other facilities which face challenges in offering outdoor play opportunities. While the American Academy of Pediatrics recommends that children under five play outside as much as possible, an April 2012 study led by Seattle Children’s Research Institute found that nearly half of U. S. preschoolers did not have even one parent-supervised outdoor play opportunity per day.

According to the study overview release, preschoolers with three or more regular playmates were twice as likely to go outside daily. Findings highlight considerable room for improvement in parent-supervised outdoor play opportunities for preschool age children. “Even if parents are not able to take their children outside to play due to logistics or time constraints, they can advocate for or insist upon it in child care or preschool settings,” said Dr. Tandon. “If we can increase awareness of why it’s so important for children to be outdoors, there can be a cultural shift and our children will benefit in many ways.”

Working with NyLawn and 70 other distributors throughout North America, Synthetic Turf International (www.synthetic-turf.com) focuses on helping people experience a greener world in places where natural grass doesn’t easily grow. Their synthetic turf products are currently in use at thousands of playgrounds, landscape projects, golf courses and indoor sport facilities.