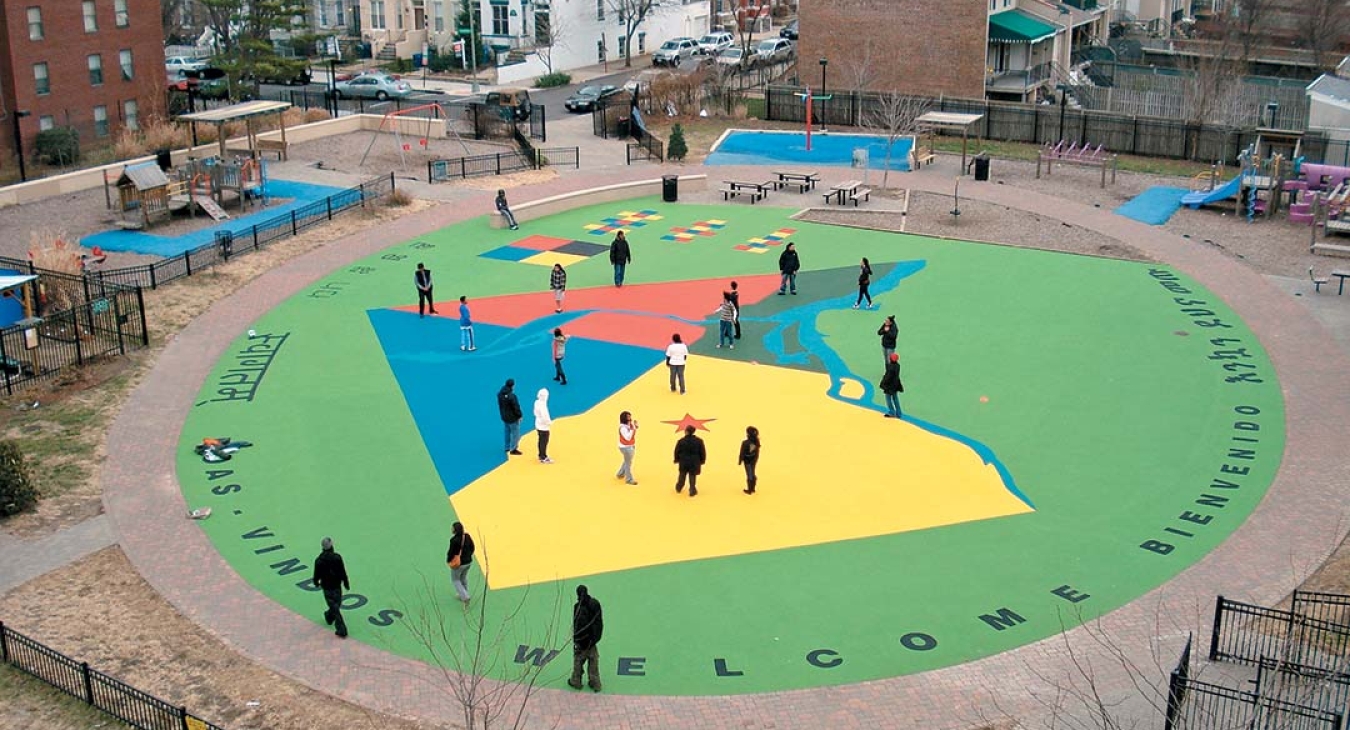 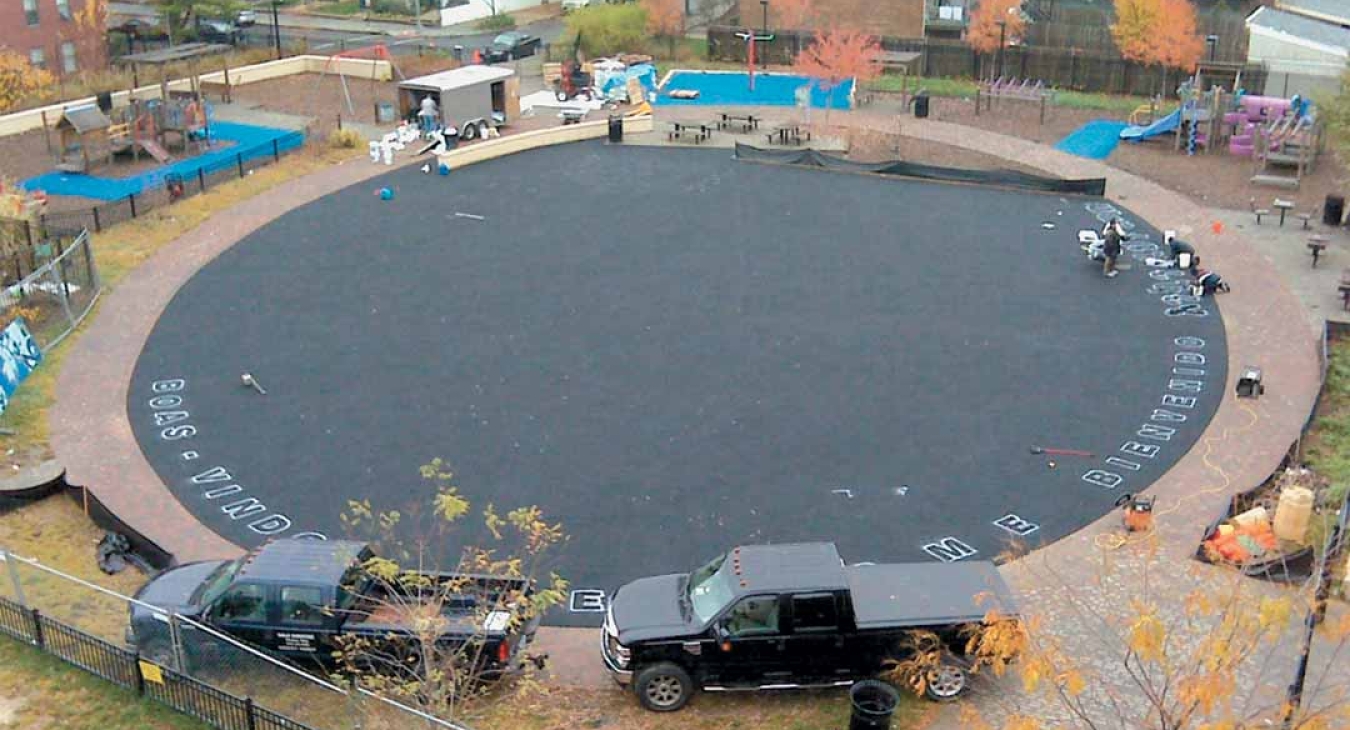 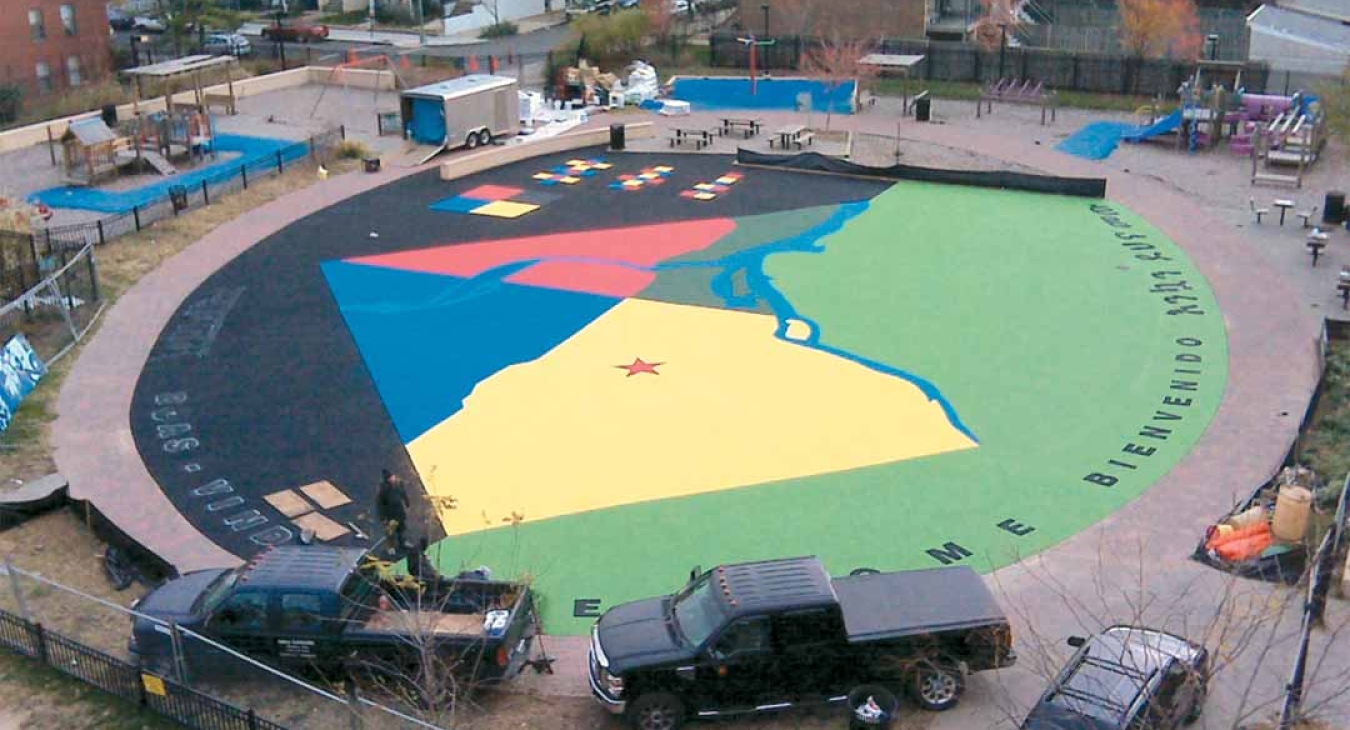 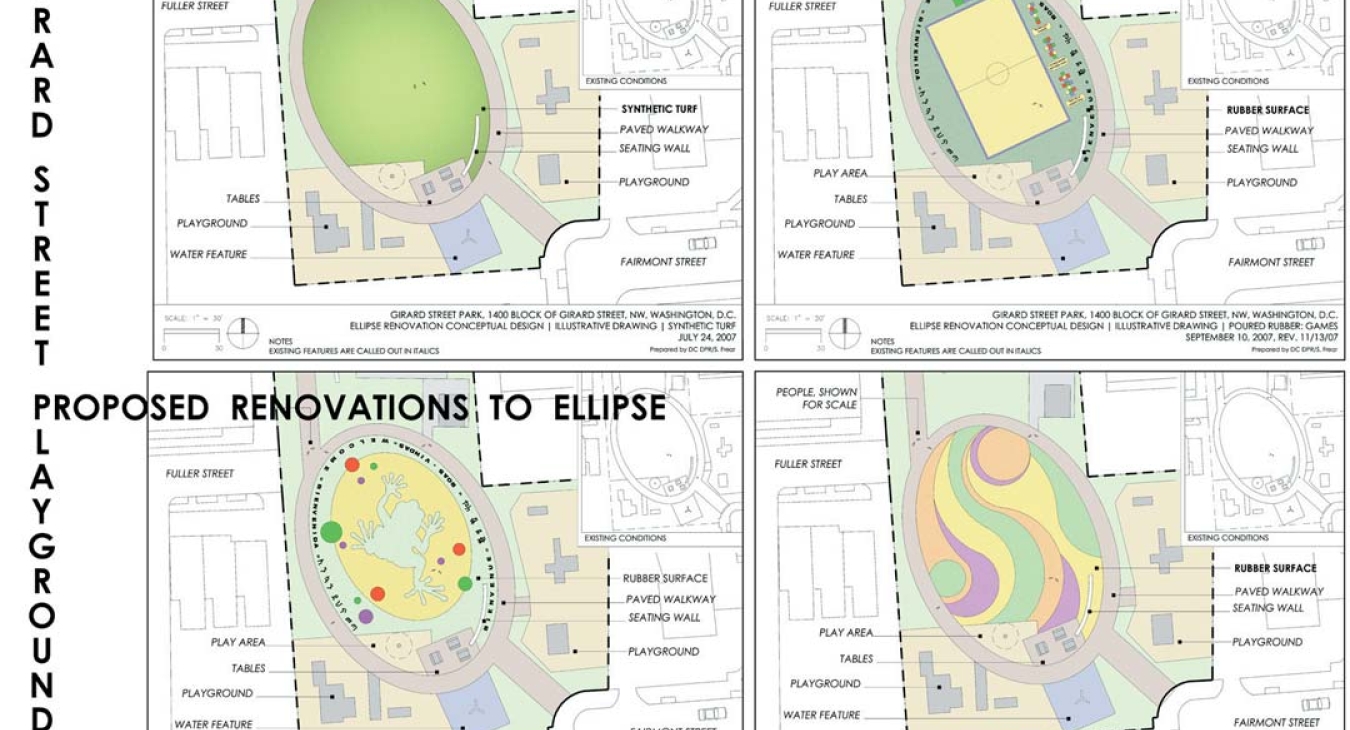 Girard Street Park was being loved almost literally to death.

There is no doubt that the park and playground, located just off Washington, D.C.’s Girard Street, is a popular place for the neighborhood children to play, hang out and gather. But they were simply wearing the park out. The grass was threadbare, which was bad enough in the summer when the park would become a dust bowl, it was during the colder winter months that the same area would turn into a mud hole—not exactly an ideal spot for the neighborhood children to play.

The city of Washington, D.C., and especially the community around the park was ready to do something about it—something that would hold up to the rigors of child’s play during the summer and winter months.

With the help of Surface America, the park has been transformed into a year-round play place that not only handles the rigors of child’s play, but has become a source of pride in Washington, D.C.’s Columbia Heights neighborhood.

The Girard Street Park and playground is definitely an urban park and its redesign was meant to capture the cultural diversity of the neighborhood that surrounds it. “Girard Street Park Playground is located in the neighborhood of Columbia Heights, a culturally diverse, redeveloping area of the city,” Sherry A. Frear said. Frear, as a member of the Office of Planning and Capital Projects in the Washington, D.C. Department of Parks and Recreation, was instrumental in seeing the new Girard Street Park come to fruition. In an effort to capture that neighborhood’s culture and diversity in a unique way, Frear explained what the city incorporated in the design.

“The languages included in the rubber surface reflect some of the languages spoken in this area: English, Spanish, Portuguese, Korean, Amharic and Sanskrit,” Frear said. “There are others, but only so many would fit.”

The park also showcases the federal district’s somewhat unique layout—quadrants, four to be exact. Frear said, “These four quadrants are represented in the rubber surface.” Girard Street Park Playground is located in the city’s northwest quadrant.

Interestingly enough, the Girard Street Park Playground has existed for decades—the Surface America surface is just the latest project to provide a lasting play area for the Columbia Heights’ children.

“Girard Street Park Playground has existed, in some form or another, for at least 50 years,” Frear said. “The playground was wholly redesigned and rebuilt in 2005. The central elliptical area was designed and built as a simple, open lawn. However, due to heavy use by the community, DPR programs, camps, and local charter schools, grass simply wasn’t sustainable, even with an in-ground irrigation system. The foot traffic was just too much.”

Something had to be done.

“Shortly after I joined the DPR, then-DPR director Wanda Durden asked that the Office of Planning and Capital Projects (OPCP) take a look at options for providing a safe, stable, sustainable play surface,” Frear said. She said the Girard Street Park area was being referred to as “The Dust Bowl” but Frear took to calling it “The Ellipse,” because “that sounded more hopeful.”

It was painfully obvious the grass surface had to go. “Rubber and artificial turf were pretty much the only options,” Frear said. “I developed a few conceptual designs and we took it out first to the local friend's group and then to the larger community for comment.”

Frear said her group did take a serious look at artificial turf but found some issues that raised some concerns. She explained, “DPR investigated artificial turf and put it out there for the community to think about, but we recommended against it, given concerns about maintenance. Unlike our artificial turf athletic fields, which are generally controlled via permitting, DPR just didn’t have the mechanism or manpower to maintain open-use, artificial turf at Columbia Heights; that is, trash, gum, food, rat droppings, etc., are too readily ‘hidden’ in artificial turf, whereas rubber is more readily hosed down.”

Perhaps it was the ease of maintaining a rubber surface or maybe it was the sweet look it was offering—or a combination of both—that sold the community on choosing that surface over artificial turf but that was the final decision.

Frear explained, “The community supported rubber and they liked the languages and the games, but not so much the various designs (see image above). One design showed artificial turf while the other three showed rubber as a small ‘field,’ a frog—a nod to the local friend's group: Friends of Girard Street Playground or “Frogsplay”—and a swirly sort of thing. At the community meeting, almost all at once, two citizens remarked, ‘Hey, how about a map of D.C.?’ So, I kept the languages and games and developed a map of D.C.. The big red star marks the location of Columbia Heights Community Center.”

The playground is located right outside the Columbia Heights Community Center at 1480 Girard Street, NW, which houses Frear’s office and the Office of Planning and Capital Projects, which are on the fourth floor. Frear said that made site visits to check work progress “a cinch.”

Once the community was on board with the surface and the design, it was time to move ahead with the actual work of installation. In many communities across the country, that would require some site work and then installation but in a city like Washington, D.C.—a place steeped in this country’s history, it’s not quite that easy. As construction workers found out when they started to excavate the site, history abounds above and below the ground in Washington, D.C.

That discovery turned out to be a “huge challenge,” Frear said. “Once excavation began, we discovered the remains of whatever former structure(s) once stood on the site. There were portions of walls, pieces of concrete pads, and plenty of loose rubble. That’s all okay if you’re just planting grass, but none of which will compact sufficiently for a good solid rubber surface.”

At that point, other agencies had to be brought into the picture to make sure nothing of historical significance was demolished or damaged during the installation of the new Girard Street Park Playground. Frear explained, “So we coordinated with the D.C. Historic Preservation Office (D.C. HPO), which advised that this neighborhood was once part of Columbian College, which eventually moved to Foggy Bottom and became George Washington University. Also, during the Civil War, a huge hospital was located in this area, and that it was likely the remains of these and/or associated structures that we had uncovered. But D.C. HPO also advised that the city had already done a preliminary survey of the area and that assorted remains were not considered significant enough to preserve.  So, construction resumed and upon the advice of the rubber surface contractor—Surface America—we excavated to 36 inches and backfilled with clean fill and gravel, to ensure a proper base for the final surface.”

Jim Dobmeier, then president of Surface America, described what the new surface includes. The final 9,500-square-foot surface is a PlayBound poured-in-place surfacing system, which is a two-layered system consisting of a basemat of 100 percent post-consumer recycled SBR (styrene Butadiene rubber) and polyurethane and a top surface made from post-industrial EPDM rubber and polyurethane. “Using a poured-in-place system, which is mixed and applied on site, allowed us to create the custom design required for this project,” Dobmeier said. “In this case, the design called for incorporating the word ‘welcome’ in six different languages, a map of D.C. and four square and hopscotch.”

Rising To The Challenge

The unique design that the Washington, D.C. Department of Parks and Recreation wanted to be incorporated into the surface created its own unique challenges, Dobmeier said. “Playground surfaces that incorporate a greater design are always more challenging and labor intensive than those with fewer graphics,” he said. “For each design, we create templates that we cut out and then fill in on-site. After each color is used, the surface needs to cure before the next color is applied, so the more intense the design and the more colors used, the longer the project. Inlaying graphics is a true art, which requires skilled craftsmanship and great attention to detail.”

The Girard Street Park Playground project is a bit larger than the standard Surface America surface but it’s not the largest the company has completed. Dobmeier said, “The intense graphic design added a level of complexity that we don’t find with every project, but an element we truly enjoy.”

Frear not only credited Surface America for a great new play area but also pointed to Nakai Surfacing owner Jim Feterle out of Ohio as doing “a masterful job of building out the design.”

Not only is the new Girard Street Park Playground a source of community pride in the Columbia Heights neighborhood, but it has also turned out to be truly a year-round area that children can enjoy. “Previously, children played in the area, despite the lack of grass, but from November to, say, April, the area was primarily mud, making it unusable,” Frear said. “Now, there is a solid, stable, safe surface for the kids to play on nearly year-round. Plus, the rubber surface is permeable, meaning rainwater passes through it, so there is no increase in stormwater runoff, such as would happen if the area were simply paved.”

She added, “And it’s really gratifying to see, from my vantage point on the fourth floor of the community center, kids running and playing in this space, on all but the coldest winter days.”

The Girard Street Park Playground project has become a personal favorite of Frear’s, maybe because from her bird’s eye view from her office window she can see the fruits of so many people’s labors or it’s the satisfaction of seeing a durable surface holding up where the former grass surface was played out.

She concluded, “I’m coming up on two years with DPR, and hoping to be here many more, but The Ellipse will probably always be one of my favorite projects. It’s just one piece of a larger site but, wow, what a difference it’s made in ensuring that kids can enjoy the playground nearly year-round.”