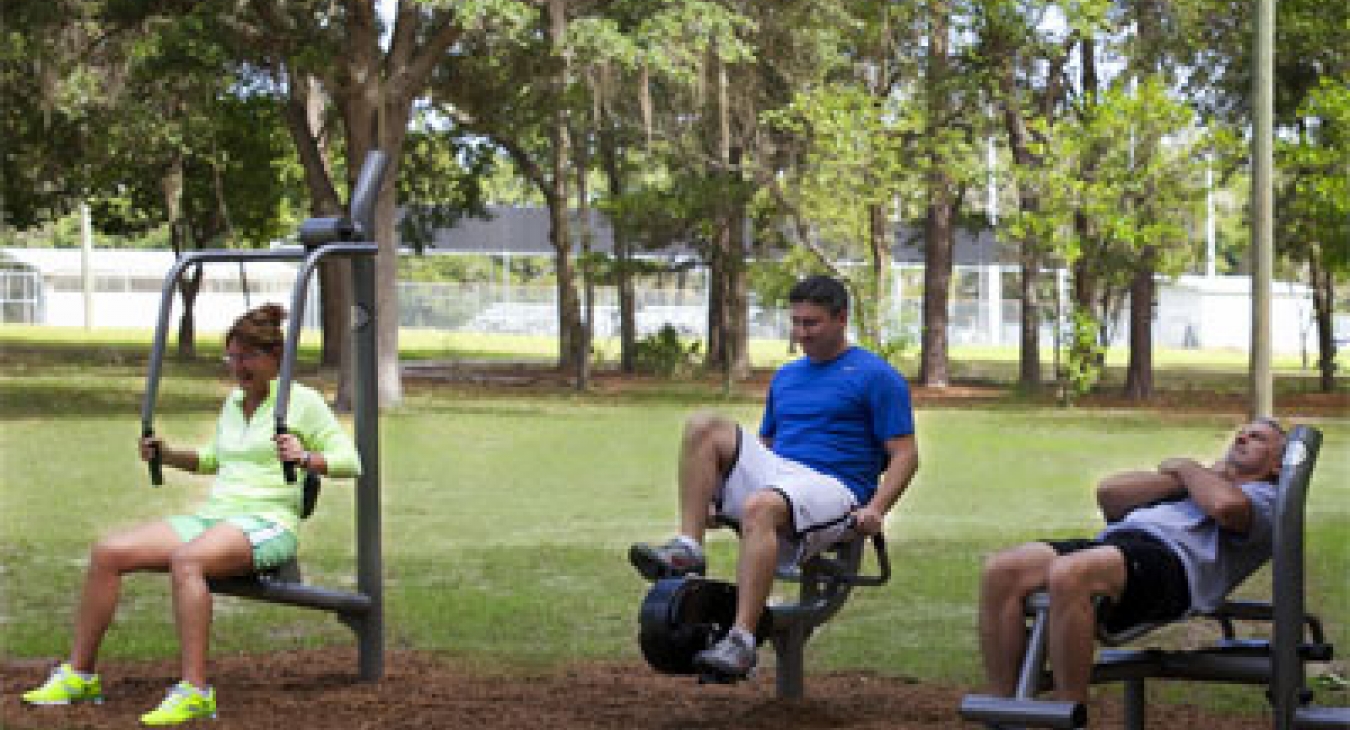 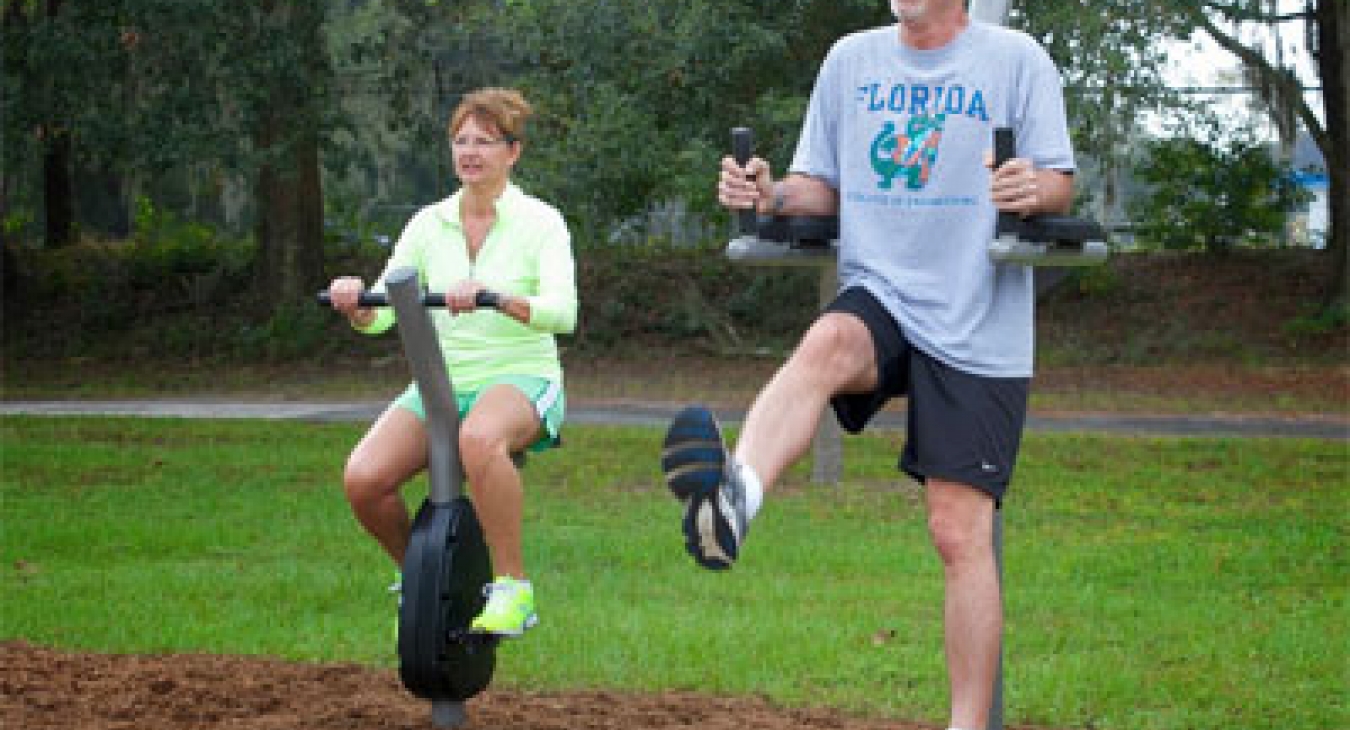 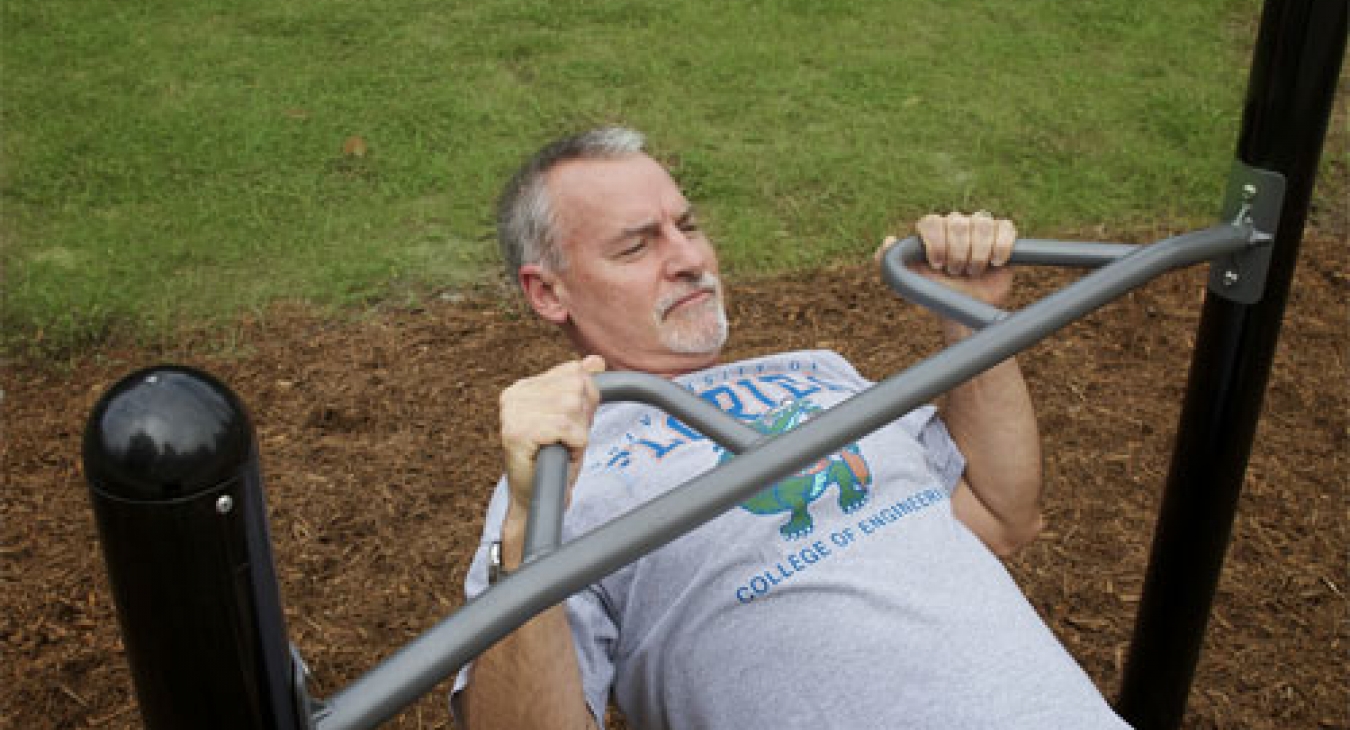 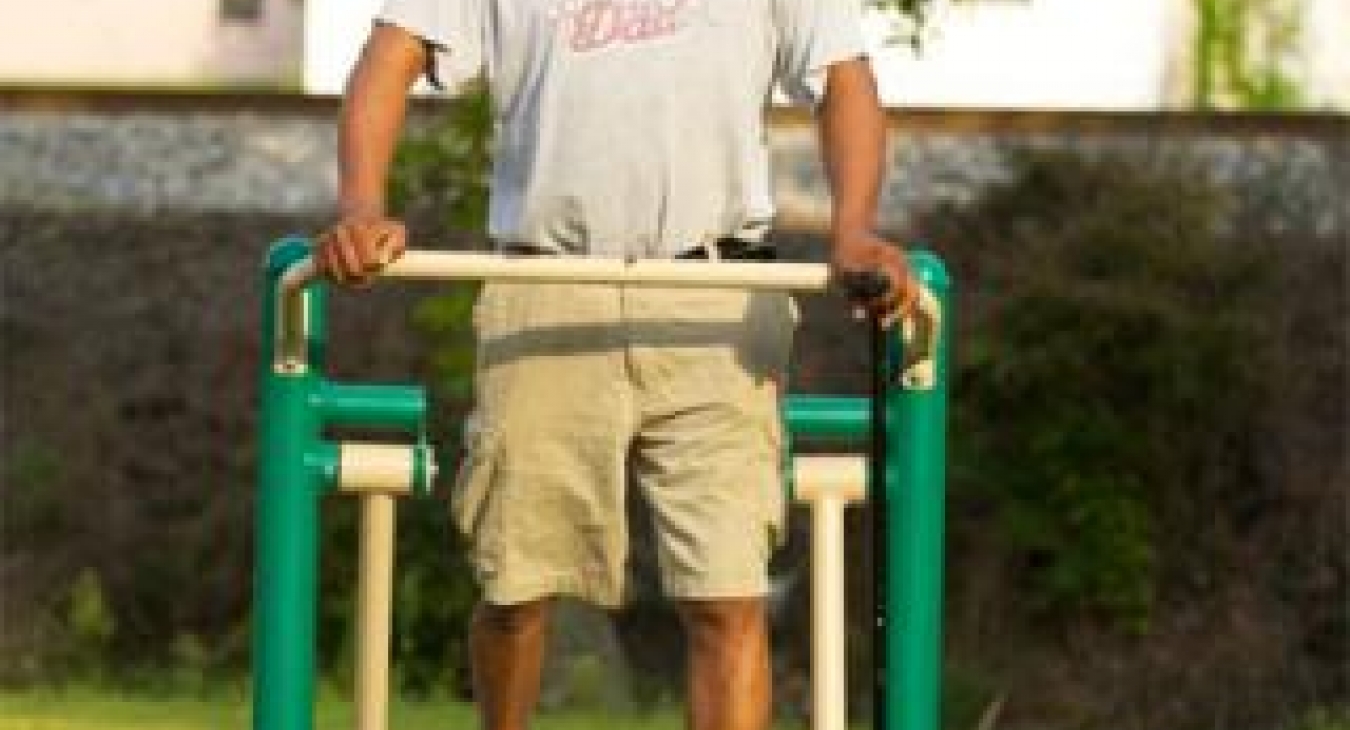 I recently had the opportunity to hear Ken Dychtwald speak at the Athletic Business conference. The presentation completely resonated on the way we should be thinking for lifelong health. (Summary: You are never too old to take charge of your life and be healthy.)

The comforting thought is that more and more Americans are thinking about longevity of life and doing something about it. There are an estimated 35 million adults age 65 and older, and the US Census predicts that number will rise to 70 million by 2030. For this population, physical activity is crucial, as it can extend the years of living independently, reduce the onset of disability, and improve overall quality of life.

The Centers for Disease Control and Prevention reported that among the US population, one in five adults exercises enough (150 minutes per week of moderate aerobic activity, plus muscle-building activity at least twice a week.) By the time people reach their mid-50s, the number dropped to around one in six, and past 65, only one in seven. But while only a small share of people overall are exercising enough, the percentage of those exercising after age 65 has been rising. In the most recent study, done in 2011, 16 percent of seniors were reported to meet the minimum guideline for exercise.

Dychtwald states that today’s adults are experiencing a “Longevity Revolution,” focusing on today’s average life expectancy and putting a plan into action to ensure we are mobile for the long run. Too often we think of fitness as what young people are doing. Dychtwald points out that 2/3 of people who have ever lived past 75 are still alive today.

The upswing in senior fitness marks a change in attitude that has been slowly taking hold since the 1950s, when Jack LaLanne, marked his 40th birthday by swimming the length of the Golden Gate bridge, underwater, carrying 140 pounds of equipment. He did it to disprove that anyone over 40 was over the hill.” More recently, Diana Nyad swam from Cuba to Florida at age 64, her fifth attempt since 1978. After the swim she told reporters she had two messages:“One is we should never, ever give up. Two is you never are too old to chase your dreams.”

Nyad’s accomplishment shows that state of mind can be as important as physical ability. She represents the new model of active aging, people who think they can do incredible things when they’re older, and have the spirit to make it happen, not listening to those who say “you can’t.” AARP understands this new mindset as they have undertaken a massive rebranding campaign with taglines like “Real Possibilities” and a self-reference of An Ally for Real Possibilities. Brilliant. The group also named their movie review/award/film festival “Movies for Grownups” as the terminology was the only reference to their target audience that wasn’t considered insulting or condescending. (“Movies for retired persons” just doesn’t have the same appeal, does it, boomers?) So how can fitness appeal to this same group? By illustrating the benefits as a key element of longer life enjoyment.

The human body loses protein with age, in a process called sarcopenia, and with it goes muscle mass. While many sports (like gymnastics and sprinting) cause people to hit their peak in their 20s, endurance sports like swimming, jogging, distance cycling, are appropriate for older athletes. Swimming is a great choice because it is low impact and presents a minimal risk of injury. Swimming is also a complete workout, incorporating the entire body and utilizing all muscles groups. Resistance training (RT) can also be one of the most effective tools in helping seniors bridge the gap from sedentary to active lifestyles.Resistance training affects the neuromuscular system, protein synthesis, and hormones, which, when not operating normally, work together to cause sarcopenia.1

With the results of studies since the late 1990s pointing to RT as a tool against sarcopenia, some therapists and physicians have started to recommend RT for sedentary seniors looking to begin a fitness regimen. The old saying goes “we must walk before we can run,” and RT can help us stand, then walk, then run, while potentially living longer healthier lifestyles.

RT has proven that elderly people need not live out their days shuffling about. Not only has adopting a resistance training regimen early in middle age been proven to reduce the appearance of sarcopenia later in life, but RT regimens undertaken by the elderly has been shown to actually reverse sarcopenia by redeveloping muscle mass.1

Aerobic exercise also appears to aid in the fight against sarcopenia. This form of exercise has shown to aid in increasing protein synthesis, an important function in maintaining muscle mass and strength in the aging population.3 Increasing protein intake also helps build muscle. These breakthroughs combined could lead to a healthier senior adult population. Interestingly, a 2010 study2 of muscle tissue from lifelong competitive runners in their 60s showed their leg muscles had almost as many motor units as those of active 25-year-olds.

Outdoor Adult Fitness Parks may be one of the greatest settings for older people looking to begin an exercise regimen. Away from the pressures and generally younger population found in a gym, Outdoor Adult Fitness Parks provide a low-stress, no-cost environment where older adults can go as groups, enjoy walking as part of the overall exercise, enjoy the company of peers, and reap the benefits of vitamin D. While scientists have long known that vitamin D plays an important role in bone health, recent studies suggest that it is also essential for maintaining muscle mass in aging people. Vitamin D helps preserve the Type II muscle fibers that are prone to atrophy in the elderly. Scientists recently noted that vitamin D helps support both muscle and bone tissue, and that low vitamin D levels seen in older adults may be associated with poor bone formation and muscle function. Thus, ensuring adequate vitamin D intake may help reduce the incidence of both osteoporosis and sarcopenia in aging people.4 Outdoor Adult Fitness Parks are generally designed to meet the criteria for a well rounded workout, providing resistance training: core development, aerobic activity, and balance and flexibility, all of which are crucial for healthy, active aging.

A new study5 conducted by researchers at the Center for BrainHealth at The University of Texas at Dallas found that engaging in regular physical exercise also helps aging adults improve memory and brain health in addition to overall fitness.The physical training group participated for one hour, three times a week for 12 weeks on a stationary bike or treadmill. The group’s cognition, resting cerebral blood flow, and cardiovascular fitness were assessed prior to the beginning of the study, at the mid-point, and at the end. Researchers saw increase in brain blood flow to the anterior cingulate, indicating higher neuronal activity and metabolic rate. The anterior cingulate has also been linked to superior cognition in late life.Exercisers who improved their memory performance also showed greater increase in brain blood flow to the hippocampus, the key brain region affected by Alzheimer's disease.

What’s equally impressive is the proof that exercising outside is proven to increase the length of time the exercise is performed by older adults. A 2012 study6 found, objectively, that those who exercised outside exercised longer and more often than those working out indoors. Specifically, the researchers asked men and women 66 or older about their exercise habits and then fitted them all with electronic gadgets that measured their activity levels for a week. The gadgets and the survey showed that the volunteers, who exercised outside, usually by walking, were significantly more physically active than those who exercised indoors, completing, on average, about 30 minutes more exercise each week than those who walked or otherwise exercised indoors.

A 2002 study7 put 19 nursing home residents through a 14-week strength-training regimen that included resistance, core, and flexibility training. At the end of the study, upper and lower body strength improved, as did flexibility and overall functional ability/mobility. The subjects chosen were non-ambulatory, and the exercises were selected to target muscles needed to transfer to and from mobility devices, and improve overall function.

Another exciting statistic8 recently revealed in the American Heart Association’s journal, Hypertension, stated that physical activity could help keep blood pressure at a healthy level. The findings suggest that the more recreation activity you get, the more you are protected from developing high blood pressure. With 78 million Americans currently diagnosed with hypertension, these findings could have significant impact of the health of future generations.

While it’s true that older adults may have to work a little harder and slower to build strength, the proof is positive that it is possible. Dychtwald said in his session that we all have a role to play, including being an example and ceasing to focus on fitness as something that is only for the young. Most importantly, we need to spread the word about how beneficial exercise is at all ages.

It is always recommended to discuss any new fitness program with your regular physician, but motivation and patience is the key. One must simply decide to overcome the mental obstacles, get started, and then stick to a routine. With the current growth explosion of Adult Outdoor Fitness Parks, there is probably one coming to a community near you. Want to encourage the movement? Go to www.playcore.com/fitnessand add Adult Fitness Parks in your area to the database. If you don’t have one nearby, talk to your park staff and share the page with them (or have them call me!) to get a complimentary copy of a best practice design guide resource for building an Outdoor Adult Fitness Park in the future. The benefits of exercise are irrefutable for everyone. The reward just may be a longer, more enjoyable life.

2 Motor unit number estimates in masters runners: use it or lose it?Canadian Centre for Activity and Aging, School of Kinesiology, Faculty of Health Sciences, The University of Western Ontario, London, Ontario, Canada.