Arithmetic and Geometry in the Playground 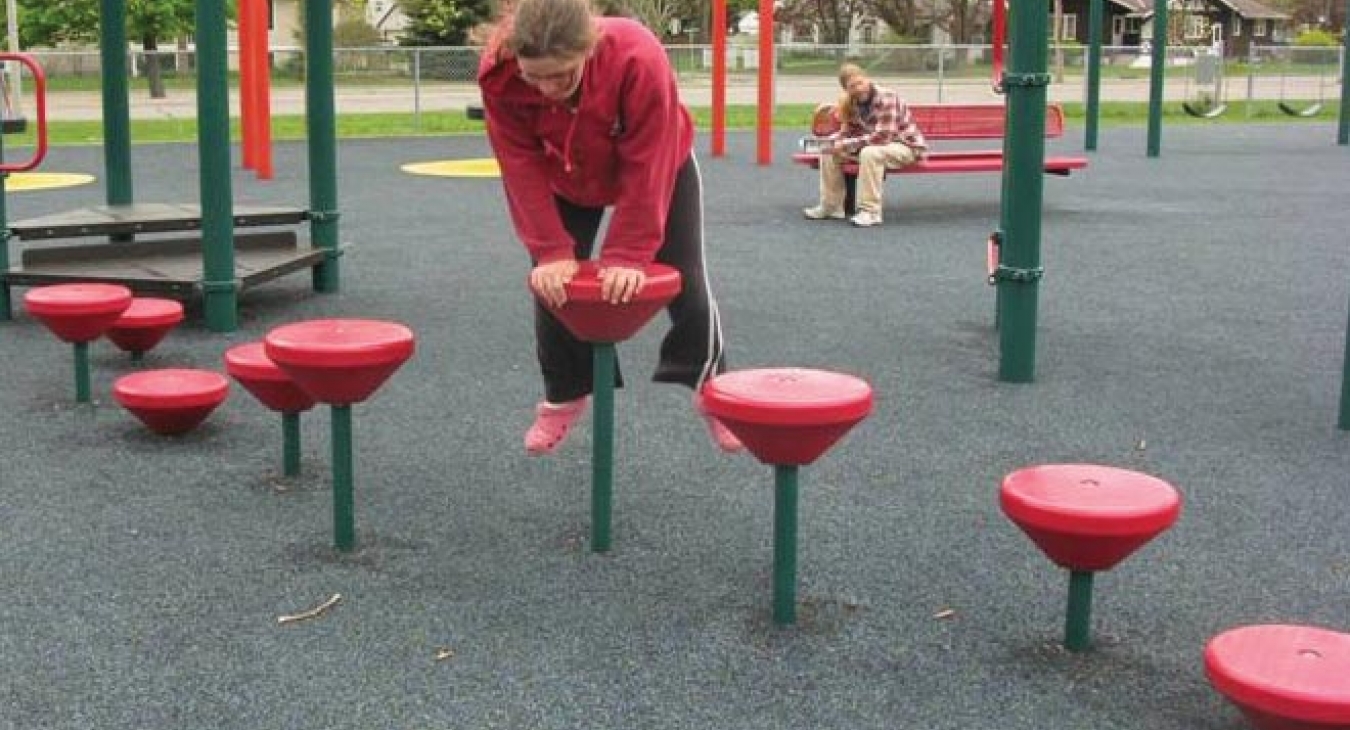 Many opportunities for counting on the playground exist.

Notebook & Pencil - Out
Playground - In

Arithmetic in the playground

In almost every area of our lives, we need mathematical calculations, so it is useful to familiarize yourself with numbers, quantities and basic arithmetic operations at an early age to help children with school accounting, provide them with a basis for mathematical thinking and not deter them from the profession.

If we look at the details of the playground, we can find many opportunities for practicing arithmetic skills, such as counting, more, less, equal, double, and more.

Here are some examples of how to take inventory on the playground:

For example, you can count up to ten when your child hangs on the bar, swinging in the swing, you can decide to count to twenty, and when the child reaches twenty, the child will descend from the swing.

Comparison is the basis for understanding the concepts "greater than ..." and "smaller than ...". For example, to answer the question "How many more rungs are there on the nearest ladder compared to the far ladder?" - The first step is a comparison and one of the important comparisons in accounting is the comparison of quantities.

Why are comparisons important?

In everyday life, we constantly make comparisons. We decide on priorities in the actions we take, what is more urgent and more important, and what is less? What should be done first and what is next? We examine products that we want to buy by comparing different parameters - price, size, appearance. We examine ourselves in relation to others through different grades, degrees, achievements.

What parent hasn't heard "why did he get more than me?"

It is not surprising that this is how children speak because we also speak to them in a similar way:

"Why do not you behave as well as your brother?"

"Why did Sharon put more effort than you into the test?"

In most cases, these comparisons do not serve us and our children and may cause frustration ("Why does he succeed and I do not?"). But in some cases, comparisons are necessary to make informed choices, so it is very worthwhile to practice the comparisons, not necessarily in the accounting context.

In the playground, comparisons allow children to examine different parameters by which they choose the various equipment and the activity on them. This is where we can bring to their attention the diversity of the facilities, and examine the equipment in detail. Comparisons can be expressed in different areas of the playground, whether it's color, distance, altitude, texture, temperature, speed, size, time, and more.

Comparing quantities means presenting two sets of objects, and asking which group has more or fewer objects. When we compare two groups of items, in this case rungs on the ladder, we ask:

Which of the two ladders has more or fewer rungs?

How many more or fewer?

Most children can point to the larger or smaller group.

We take two ladders, one with seven rungs, and the second ladder with four rungs. In the question of how much seven is greater than four, we must create equality between seven and four. In order to create this equality, we must reduce the four-rung ladder to the four units on the second scale, ie, find each step on the four-step scale a mate on the seven-step scale, and count the remaining rungs, and then see that there are three stages that do not have a mate. Thus we will reach the result that the difference between seven and four rungs is three rungs.

A child who has not yet acquired the concept of equality cannot understand concepts of inequality (greater than / less than).

Older children can practice multiplication in the playground. For example, if there are 4 swings and each swing has two seats, how many seats are there in total? What exercise should we do?

Therefore, practicing counting games on the playground is a worthwhile venture. Ask the kids: what is more, swings or slides? How many pages does the tower have? What is the difference between the two slides?

If we ask children what they see on the playground, most of them will probably answer: "Slide, swing, tower, tunnel..." We are used to seeing the playground through the names of the equipment, but if we look deeper - we can see countless shapes and geometry figures hiding in the equipment themselves and between them, and the children can be exposed to other geometric concepts beyond the forms most of which they already know.

What is a geometric shape?

A geometric form is a shape described by a closed line enclosing part of a plane.

The main forms of engineering are a circle, a triangle, a square, a rectangle, a parallelogram, a trapezoid, and rhombus. 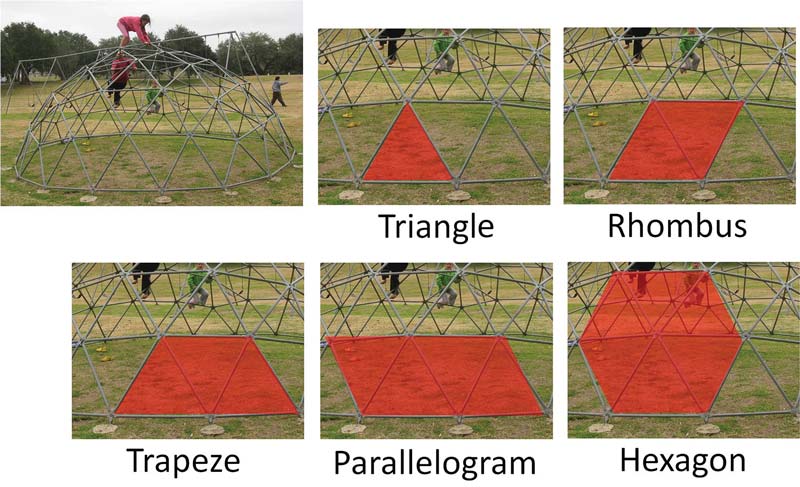 If you walk along the closed line that describes the geometric shape, you get back to the starting point. Such a closed line divides the plane into two parts: the section within the line, which is the interior of the geometric form, and the part outside the line.

The area within the enclosed line is the area of the geometry, and the length of the line is the perimeter of the shape. 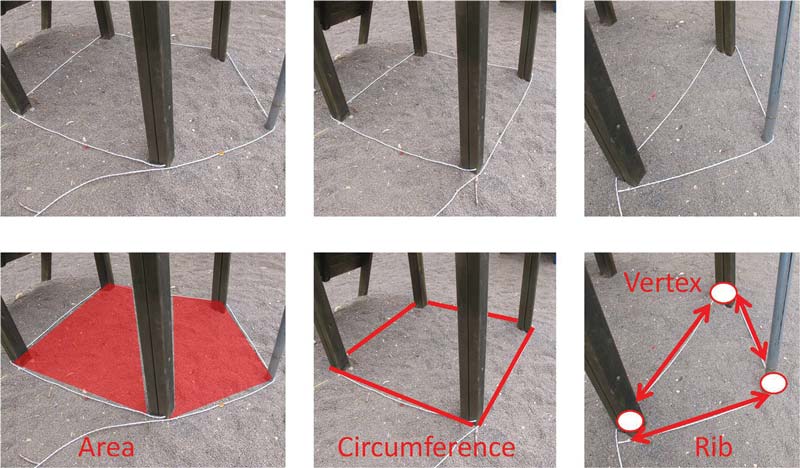 Each straight segment of the line that encloses the polygon is called a rib, and each point where two ribs meet is called a vertex.

And so, without a notebook and without a sharpened pencil, you can enrich the children's vocabulary in the playground in terms of geometry: space, circumference, rib, vertex and more.

The geometric shapes are found in the playground in several degrees: the simple shapes are the surfaces or elements that the children know, such as the steering wheel, the handles in the swing, the rose leaf, the railing and the turnstile. The more complex forms are hidden shapes, that is, they need to be imagined a little because they are in the spaces between the elements or they are on a large scale that is hard to distinguish.

You can play with the children "look for the triangle" and find simple and complex shapes.

How to create geometric shapes

We discovered a lot of shapes and lines in the playground, now we will learn how to create shapes.

Let's take these things to the playground: a thin rope (about four millimeters thick and ten meters long) and colorful stickers for marking on the rope.

For safety reasons, do not leave the rope unattended in the playground!

Most of the towers in the playgrounds are built of four columns. You can move the rope around the four columns and create a square. The geometric shape is the one that is enclosed within the rope.
For children, it is relatively easy to see the shapes formed on the ground. The flat forms are easy for them to absorb.

You can create triangles between any three columns, or pentagon with five columns. You can point out to the child the connections between the number of columns and the number of vertices and ribs. 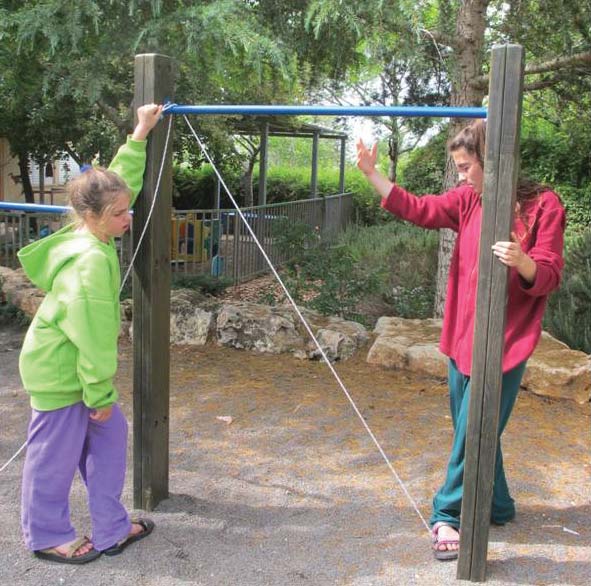 You can compare the size of the shape ribs with your feet, or by placing the rope length of one rib on the other side and so on.

Older children can make shapes up high and not just on the ground. They can also find the ratio between the diameter of the tunnel and its perimeter, and find that the perimeter is slightly more than 3 times the diameter.

So, now you can see how the playground has become a laboratory for learning arithmetic and geometry, without a notebook and pencil.

I did counting with my kids as they climbed, jumped, swinging on swings. It was great fun and it did introduce them to numbers with a smile. They were 4,5,6 yrs of age. They are now successful adults in math and other ways. Thanks for the fun ideas and encouraging words for every day math fun.
I'm currently working on the possibilities of an interactive math playground. This would be a playground that kids play on and are independently exposed to math concepts.
If you have any further ideas, I'm open to them. I believe that there are many mini-mathematicians out there. I also believe that combining play and enjoyment in mental aspects of learning helps everyone learn to 'think' ...with a smile.
Thank you for you posting
Kay

Dennis, we most certainly would consider publishing an article written by you. Please email me at [email protected] and we can work out the details.

Sara, Thank you for questioning or wondering why the article prompted my comment. Essentially, I believe there are many Non-profits that are false prophets in order to compete for funding and there are many more For- profits who are profiteering with the sell of expensive equipment and protective surfacing that really doesn't have the benefits that children need in today's world. As the Lorax say's, Unless someone like you cares a whole awful lot, nothing is going to get better. It's not. (such as obesity rates, injury rates, etc.)
I will gladly make my case with more supporting evedence if it will be published and keep the conversation going. Do you really think this is a good math exercise - For example, you can count up to ten when your child hangs on the bar, swinging in the swing, you can decide to count to twenty, and when the child reaches twenty, the child will descend from the swing. Who is the exercise for, the person counting or the child?
Really, was the author commissioned to write this article by a playground company? Did someone pay your magazine to publish the article? By transparent about these questions and let's follow the money to see what prompted this article. The same goes for "risky play" articles. What are the author's credentials and what prompts their comments? Why not publish comments from credible and knowledgeable experts like Dr. Stuart Brown or Dr.Joe Frost. If I write you an article, will you consider publishing it and if so, what are the terms or conditions? How much do you wonder what prompts my comments?
Thanks for commenting,
Sincerely,
Dennis

Dennis, we value your opinion and strive to bring all aspects of the play and playground industry to light. We at PGP do not sell equipment - we only champion play.

Playgrounds and safety surfacing is a large investment. The fact that kids get hurt on equipment is tragic, however, we as a society can never reduce all risk from all things. We have many articles on the value of risky play. This article simply speaks of other uses for playground equipment.  I do wonder why this article prompted this comment.

This is a great example of a "BS article" to sell expensive playground equipment that needs expensive protective surfacing. If 200,000 children receive ER treatment every year, since year 2000, how many have been to the ER in the past 17 years. Answer - Too many.