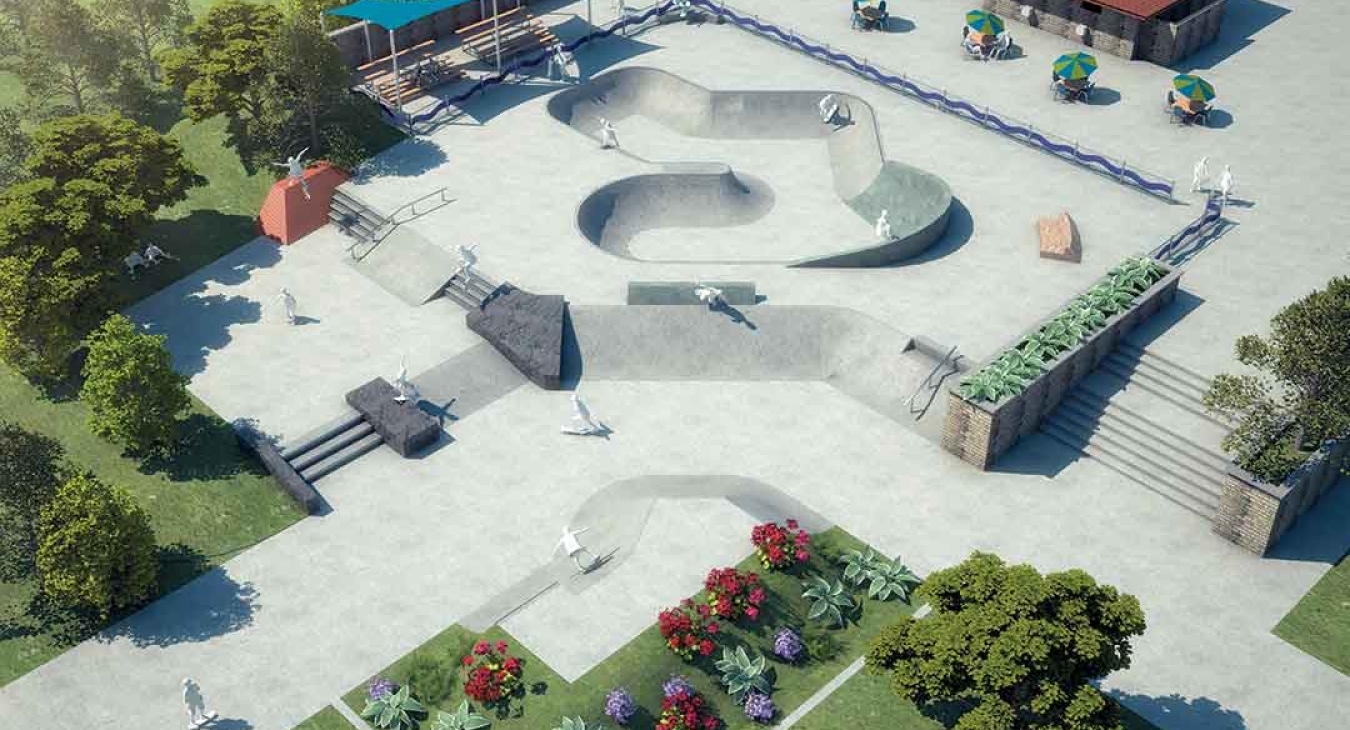 Olympic Park by Spohn Ranch, a designer for the skateboarding competition in the X-Games, advised using more elevation changes, bowls, snake runs and the advanced concrete features that skaters like as part of a cohesive skatepark design. 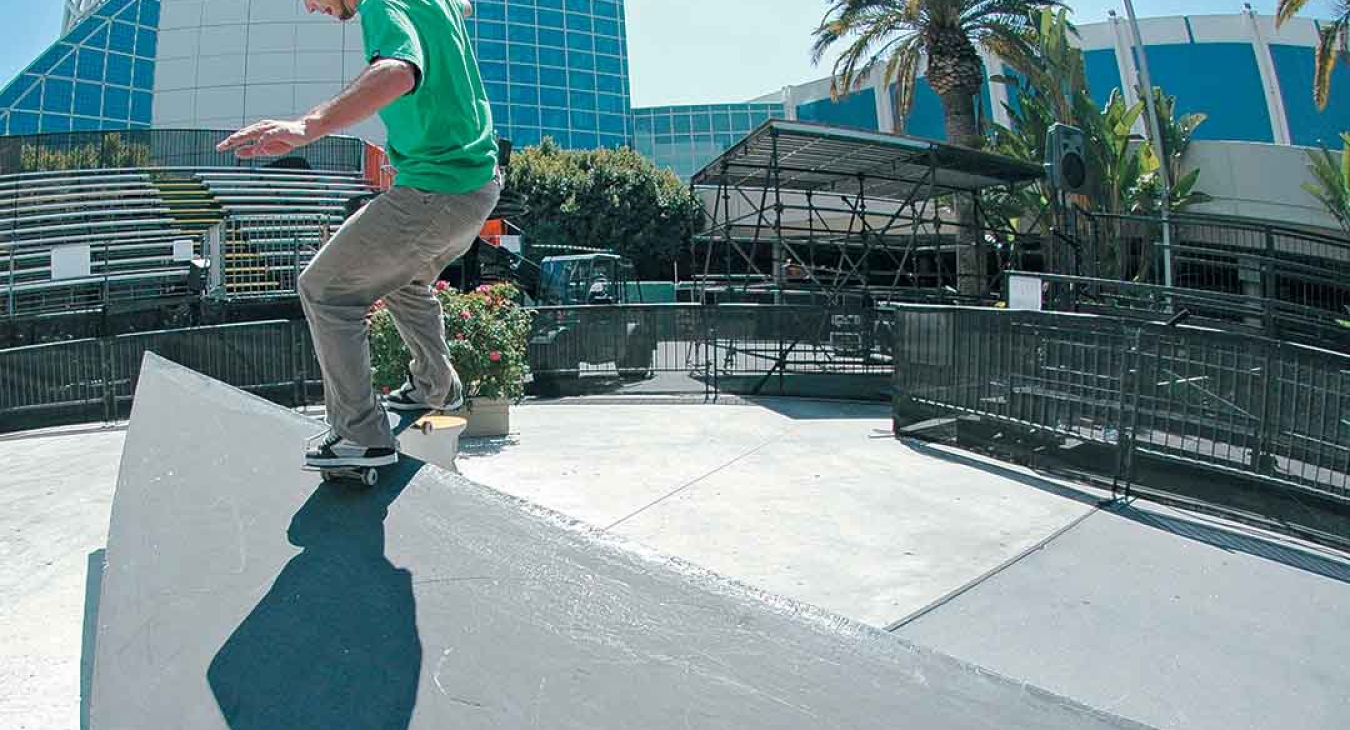 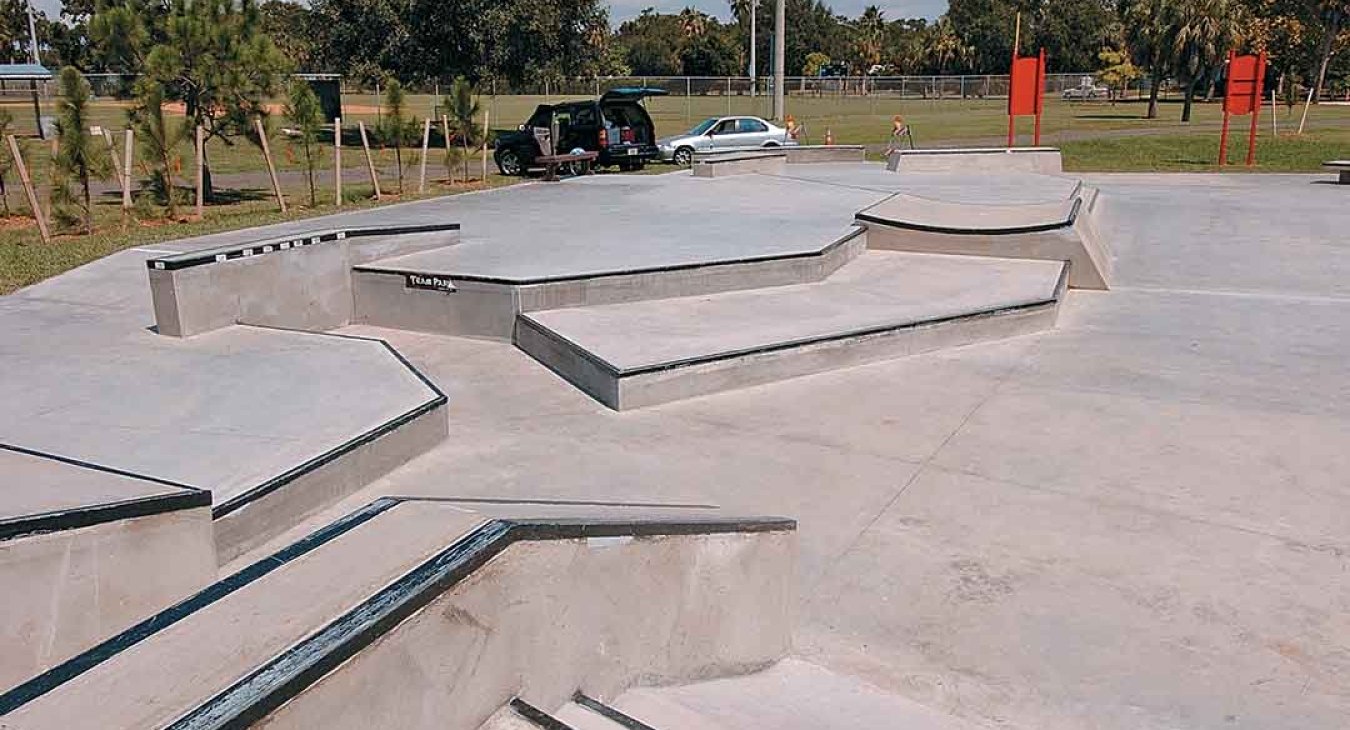 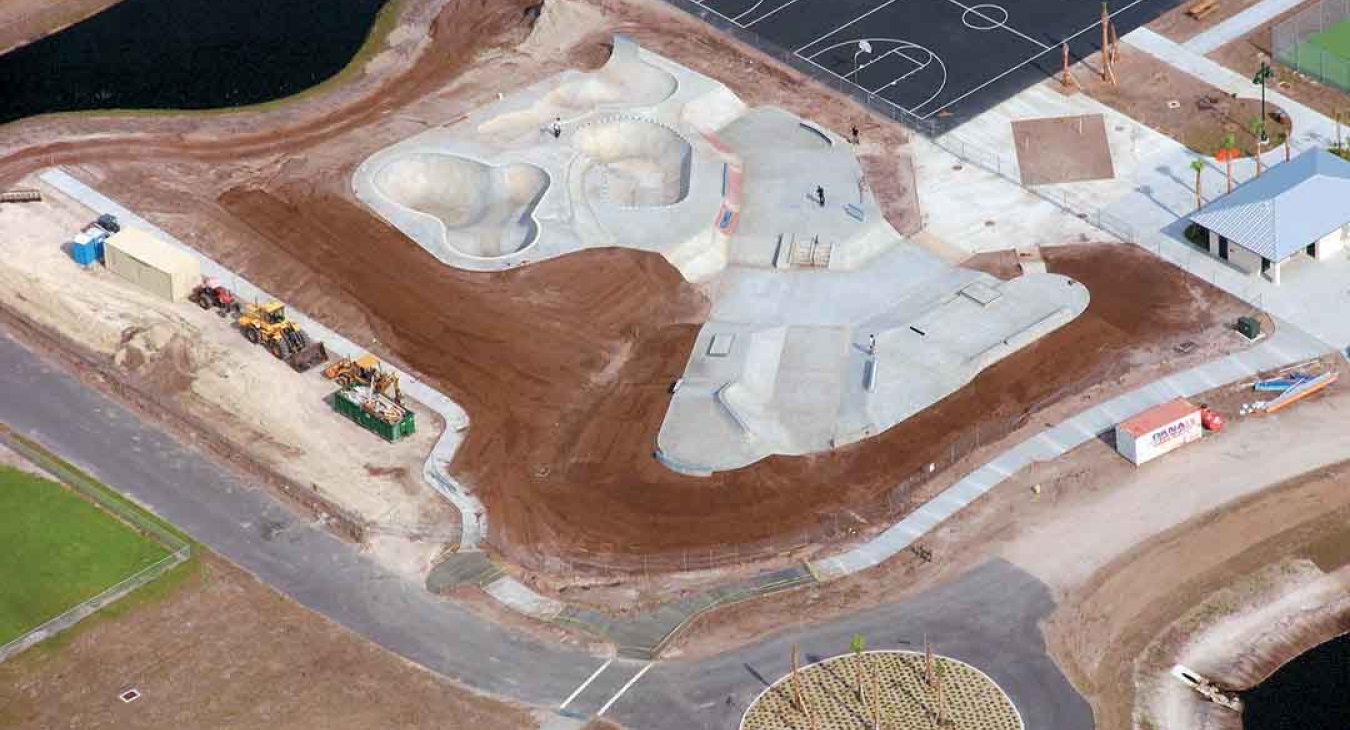 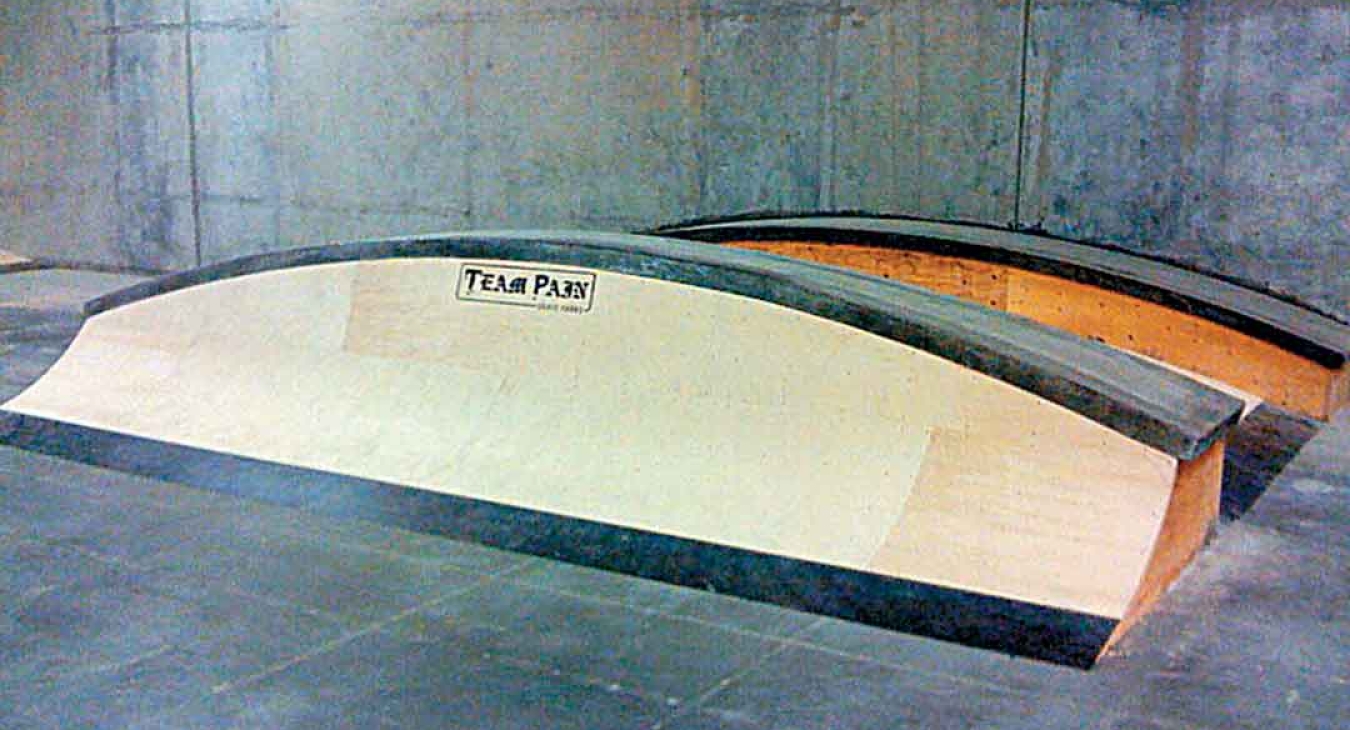 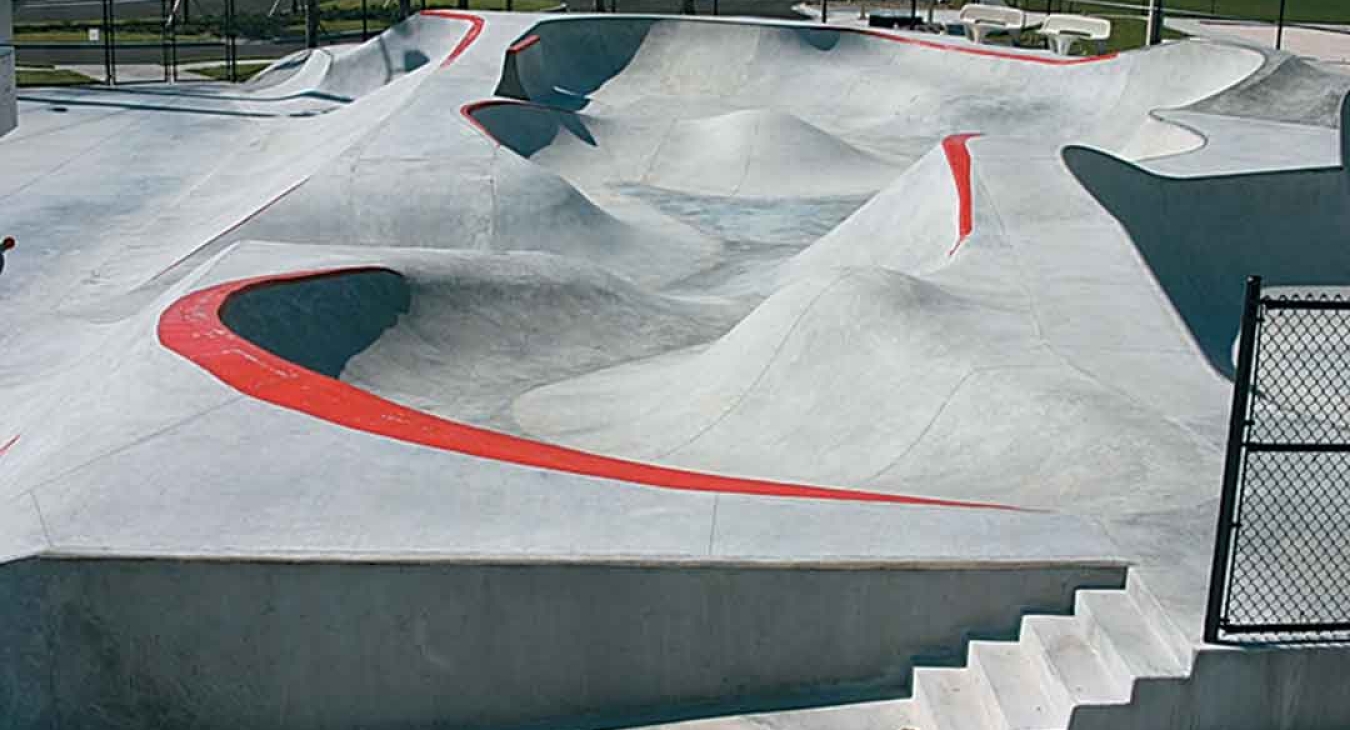 Don’t let their signature slacker style and sneakers throw you off. Skaters are a passionate breed and their penchant for pushing themselves to greater feats of skateboarding prowess won’t let them settle for just any skatepark.

Whether publicly or privately funded, if your city is considering building a skatepark, the key consideration is the elements of design.

If your city is willing to fund the project, be sure to invest time into finding out the styles, tastes and preferences of local skaters. Otherwise, as has happened recently in some cities, projects have been paid for, constructed and then abandoned by skaters who weren’t challenged enough by what the skatepark provided or the park itself didn’t stand up to challenges posed by real-world structures.

Costly errors like these design flaws can be avoided by knowing your local skaters’ preferences and then creating the best skatepark to fit their tastes. Designing a park around a large central bowl/pool feature may look good on paper, but if your area skaters prefer street-style technical skating, it just won’t entice them. Designers say it’s crucial to take local skaters’ viewpoints into account as you create your design.

There is a pack of skatepark designers who are ready and willing to help your city determine what would be the best fit for your local skaters’ needs. Skatepark companies take your information about locale, needs, design ammentities, landscape, budget and site features into account as they design and build a park to suit your needs or use prefabricated structures that work into a flat-slab area appropriated for the skatepark.

There are countless ways to design a skatepark and there are distinct schools of thought that go into the creation of a great skatepark. Some designers rely on the ease and speed of pre-fabricated elements, while others prefer the unique style of custom-made concrete skateparks.

Tito Porrata, with Team Pain Enterprises, suggested taking a master plan approach to skatepark design. He said that designers who aren’t skaters often make the mistake of ordering pre-made pieces and then placing them in ways that a real-life skater would never use. He said park planning needs to be looked at the same way a city might look at a golf course, meaning each course will have its own distinct properties. Porrata advises getting opinions from someone with a real “skate brain.”

“A lot of people who don’t practice the sport aren’t aware of what it is,” Porrata said. “They aren’t aware of how many different disciplines there are in the sport. A lot of times these things end up being budget-driven and they end up with a park that doesn’t really challenge the full skate population. What I recommend right off the bat is a balanced skatepark design.”

After all, what would be more devastating to a community that rallied around local kids to create a dream skatepark, only to have them abandon it shortly after completion? In skatepark design, the elements of the park must have a certain flow to them and there must be challenges in the concept to keep skaters interested.

“A balanced park will get a broader skater demographic,” Porrata said. “This is good since it creates an environment for the sort of unwritten skate etiquette to take effect. Overall respect, pointers and mentoring and teaching will take place in a well-designed park. An imbalanced park just provides cheap daycare.”

Hays Hitzing, director of Skatepark Development at Spohn Ranch, believes that cities are wise to offer “skateplaza” style parks since they incorporate design elements that make the parks more appealing to both street skaters and the public at large. Hitzing said the skateplaza concept arose after the X-Games, which Spohn helped design. ESPN commissioned his company to build skateable structures for the games, which ESPN then gave away, allowing cities to have their own permanent municipal skateparks after the events were over.

As far as the skate elements themselves, he said granite, concrete, brick and stairs, along with other colors and textures are typically incorporated in newer, more advanced designs.

“With skating elements, I recommend opting for a mini-ramp and small half pipe, about 3-4 feet tall, where kids can do tricks at each side. For younger skaters, they really enjoy these and it services a lot of skaters. Several skaters can use it at once, as opposed to a bowl or pool, where only one person can use it at a time and then there’s the big intimidation factor for younger skaters. It’s the drop-in fear factor; it just feels like you are falling.”

He added that older skaters are likely to be vocal in their desires for a big pool/ramp structure for the long carving, surf-like runs, but said that in their usage studies, roughly 90 percent of skaters will be crowded in the parks’ street features and the bowls and pools will be used the least. He said the average kid wants to master a trick and will go to skate parks almost daily, trying to become a better skater. He said to incorporate a little bit of flow in the design, but to keep in mind most skaters want real street obstacles. He added rubber sidewalks are a nice amenity to include in the design since it creates an invisible barrier without a wall or fence which kids run into and get hurt.

Hitzing said the key design elements in skateplazas make them appealing as social and recreational gathering sites for skaters. Skateplazas are a way for cities to create more than just some vert ramps on a concrete slab. He recommends skateplazas, since they create an enticing environment for kids and parents, teens and friends to gather and watch their skater friends show off their stunts. Similar to the welcoming areas in front of a downtown city bank, skateplazas have landscaping, trees and striking concrete skate structures.

“Landscaping, cutouts of shrubbery, grass gaps that can be ollied over offer a new challenge to skaters, too,” Hitzing said. “It looks like a plaza in front of a bank, but there are ledges and stairs that have a specific geometry. They have stainless steel edging and we plan for the corrosion from skating which can chip away at stones. We design a plaza with this type (street) of skating in mind. But, it is still a multi-use space. It’s attractive, usable to pedestrians and there are benches and ledges for both skaters and others.”

There are additional social benefits from the skateplaza design, as well. “The plaza is inviting,” he said. “A recreational skatepark becomes a teen hangout spot. The goal is to keep kids off the street and in the park, where they want to show off to their friends. I really do feel strongly that integrated plaza skateparks help to incorporate skaters into the larger community and recognize skateboarding as a healthy, legal activity.”

Another huge skatepark design trend is the concept of “skateable art.” Skateable art or skate art is aesthetically pleasing and serves multiple functions, yet also provides the new terrain and challenges that skaters crave. Add in user-friendly options like pedestrian walkways for the public at large and cities and skaters can easily come together in creating a skaters’ dream environment that also appeals to the desires of the city as a whole. You can slip in artistic, creative items like benches that are expertly designed to be visually appealing, functional and yet skateable.

On the opposite end of the spectrum are companies that create parks with pre-fabricated elements.

Tyler Woods, with American Ramp Company, said there are a few main types of build methods to consider if you are looking at a pre-fabricated park.

• An all-steel frame and riding surface. Woods said a steel frame, with a Skatelite, riding surface (which is a commercial material laminate partially made from paper based material) is best to use in an indoor skatepark design.

• Lumber skatepark. A lumber frame, with Skatelite cover, is becoming more and more popular, according to Tyler.

• Concrete. Pre-cast concrete sectionals of quarter pipes, banks, ledges and stairs are laid out on a flat concrete slab and then the remaining concrete work is done around these pre-cast elements.

As for the amenities involved in a well-designed skatepark, he said if it is in line with your budget, it is always great to have a facility that will provide bathrooms and water fountains, since kids get too hot in the summer.

“Kids will resort to the woods, if there aren’t proper amenities,” he said. He added that a nice addition to a skatepark design would be the addition of a shade structure and a covered spectator area.

Whether your city is looking for a skatepark to keep kids out of trouble or a space for teens and community members alike to recreate, the best design for a skatepark is always an informed design.

Taking your local skaters’ desires to heart and creating a skatepark that is inviting to all members of the public will ensure your skatepark design will be enticing for novice and experienced skaters for years to come.