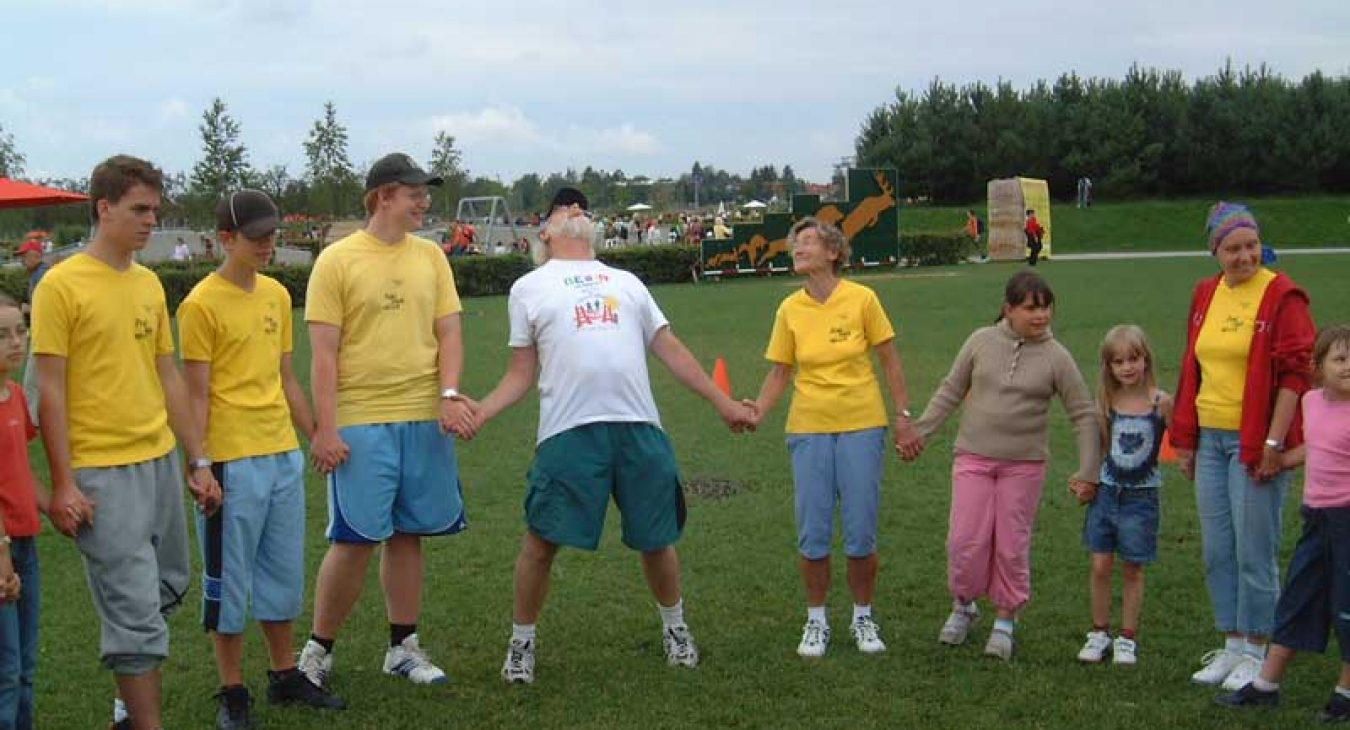 “We firmly believe that the development of the Play Community and the facilitation of FLOW are the main goals of play leadership.” John M. O’Connell and Bill Michaelis ~ (The Leader’s Handbook)

Finding ways to create and support a healthy Play Community is perhaps more important now than when the New Games Foundation existed. No matter what your play form, context, or vehicle might be (e.g., free play, nature activities, art play, equipment play, sports, corporate teambuilding, board games, techno play, etc.), one of your prime duties as a “play facilitator” is to help create a positive Play Community. There are several principles in New Games that help that process, and have broad-based applicability today. (The following contains excerpts from The Leader’s Handbook.)

One of the primary goals of a play leader is to establish a sense of a “Caring Play Community”—common interest, common good, common fun. That is, whether we’re playing cooperatively and/or competitively, we’ve agreed that we’re playing together and we’re committed to try our best to play well together (and to do whatever it takes to accomplish that). Why? Because mostly we like playing for the fun of it, and we like playing with each other, because we support each other in our pursuit of fun. An elf and games designer named Bernie DeKoven has written a whole book about this called The Well-Played Game. The point is, if we can help establish that “caring play community,” there is no telling what kind of growth, surprises, and fun will follow. As leaders there are several things we can do initially to help build that community:

Emphasize Teamwork and Share the Power. Get your players involved in making suggestions for rules, helping with equipment and demonstrations, and sharing responsibility for safety. The more you do this, the more ownership they will feel of the game. Practice using questioning strategies (e.g., What do you folks think? What might make it a better game?).

Emphasize Play as Communication and Communication as Facilitating Playfulness. The greatest percentage of human communication is nonverbal. A smile, a kazoo, a red clown nose, or a funny T-shirt goes a long way toward saying, “Let’s play!” It might just be your tone of voice. Another way that you as a leader can facilitate playfulness is to think about and pay attention to all the ways that you can give people “permission” to be playful. That is, letting them know in one way or another (verbally, nonverbally, or by your modeling) it’s OK not to be perfect, it’s good enough to give it your best shot, big people can play too, and it’s OK to be expressive and/or publicly foolish.

Emphasize Involvement and Participation. Fun activities, whether they are competitive and/or cooperative, most often need some level of challenge. So try to get folks hooked in mentally, physically, and expressively, but also procedurally (e.g., asking them, emphasizing teamwork). Challenge them to stretch themselves a bit at some level. Also emphasize activities that will get everyone involved without a lot of standing around or waiting in lines.

Choose or modify games that allow people access to them and don’t screen them out because they are not fast enough, or flexible enough, or athletic enough. Choose games that the very widest range of the population can play, whether they are athletic or just have athlete’s foot. Providing access to your activities also implies creating the “permission” for egress. That is, anyone at any time should feel free to leave your game if it is not working for him or her or if he or she is not in the right mood. The right to play includes the right not to play and sometimes you have to tell people that. And believe it or not, that freedom helps strengthen the play community.

The last concept related to participation and involvement is congregation. Play at its best helps to break down barriers and build bridges between people, whether old or young, able-bodied or differently-abled, black or white. The playground becomes the common ground where we can laugh together, be challenged together, and win together in the broadest sense.

Attention to all of these factors—teamwork, sharing power, communication, involvement, participation, access, egress, and integration—goes a long way to help establish the play community. You as a leader can make that happen.

The next major concept we want to emphasize is facilitation. Our whole approach to leadership is that of facilitation or “making things easier” for the people to play (that is what the word actually means) versus commanding them, or having a know-it-all attitude. Your power doesn’t come from the fact that you’re wearing a black-and-white striped T-shirt and have a whistle around your neck. Your power as a leader comes from the relationships that you establish with your players and from your ongoing trust and confidence in yourself to take risks, to learn from your mistakes, to model playfulness, and to put yourself on the line. That doesn’t mean that you won’t have to exert higher levels of visibility and authority in some instances (e.g., dangerous situations), but it does mean that your real effectiveness comes from the trust and communication you establish in the play community.

The fun begins with you. What is your own personal playfulness about and how do you communicate it?

You can’t take anyone anywhere you’re not willing to go yourself. If you want people to risk or be expressive or try or be crazy or “whatever,” you’ve got to be willing to model it, and to express it yourself.

There is so much more to say about the philosophy, principles, and techniques for creating the Play Community that are elaborated upon in The Leader’s Handbook. These include the evolving roles and goals of leaders/players’ ownership and shared power, responsiveness to creativity and change, and how we can all be better guardians of the process of play, the context of safety, the energy, the fun, and the flow. Play On!