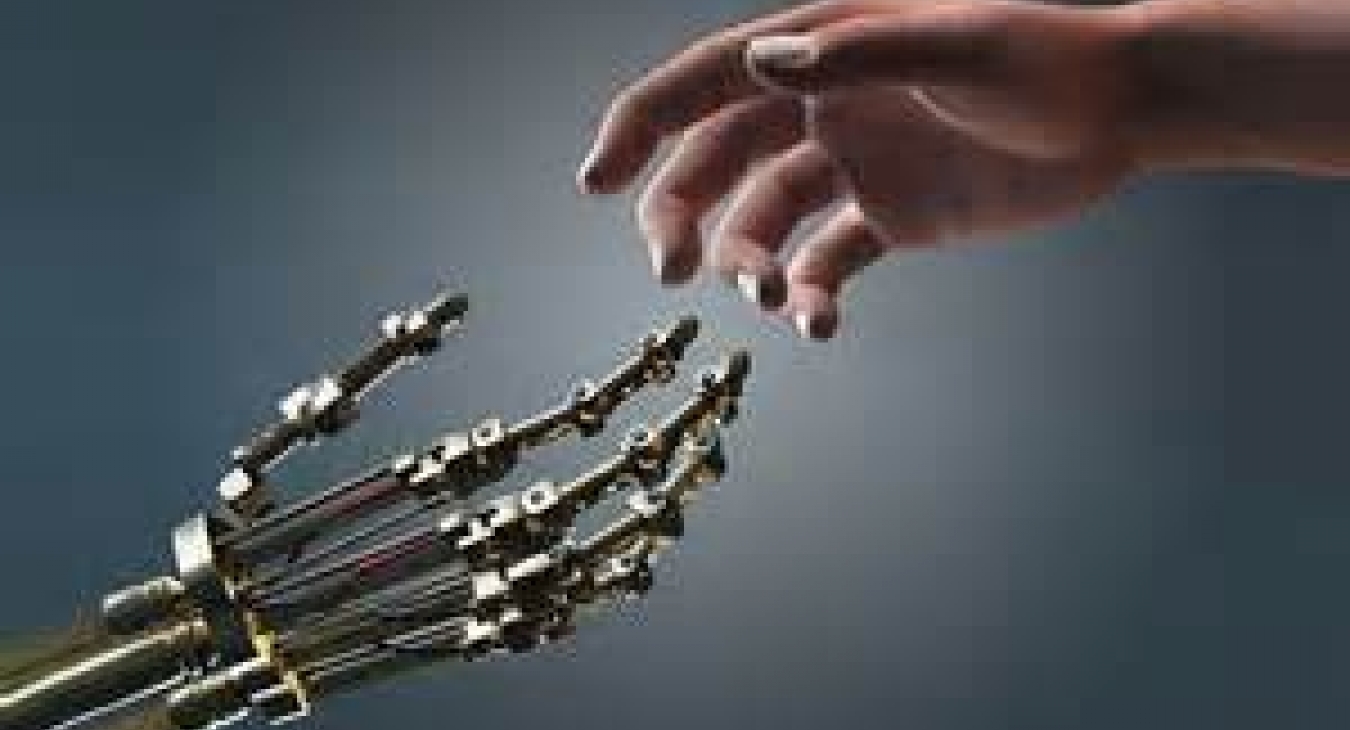 In a recent conversation with play designer Cas Holman, best know for her Rigamajig, she mentioned the Cyborg Manifesto, an essay written by Donna Haraway. Many writers have adopted Ms. Haraway’s notion of humans becoming cyborgs for various purposes and I found it fascinating to research that many branched discussion.

On reflection I have to conclude it is absolutely true that modern humans are rapidly turning into cyborgs.

A cyborg (short for "cybernetic organism") is a being with both organic and biomechatronic parts. – Wikipedia

While in the narrow sense a true cyborg has the mechanical parts integrated into their bodies, such as pacemakers, but the reality is that the connection between us and our machines is now so intimate that we might as well be wearing them, which by the way is just around the corner with the advent of “smart garments”. One need only look around at people with their faces glued to their communication devices (phones) or sitting behind the wheel of their transportation devices (cars) traveling to their environmental protection devices (homes). We have incorporated all manner of biomechatronic devices that extend our physical being and capabilities. The thing about cyborgization is that these mechanical extensions of ourselves are all purpose driven; they help us do things, mainly work.

I shared the gist of my conversation with Gwen Gordon, the producer of the Now Playing documentary currently in development, and she suggested that complexity theory could be useful to help understand play in its various contexts. Generally speaking play can be said to be the sweet spot between chaos on one side and order on the other. For a healthy life, or society, a balance must be struck. Too much order and we become inflexible and specialized, a cyborg. Too much chaos and we are scattered, disconnected and ineffectual.

Play, like love, is a life force and without it we are not truly human.  We must remember that as, Cas said to me, “Play has been doing its job all along” and she’s right, throughout most of evolution play has been equipping humans to survive and thrive.

As we remove play from life we become less and less human. In our drive to use mechanical power we not only repress play but also all that is natural. Consider the recent studies that have shown:

An amazing new early childhood program is emerging in the Chinese Provence of Anji. Rather than push academics down to younger as has been the trend both in China and in the US, in an Anji Play program all the children do is play. The rapid success of Anji play is due in a large part to reminding parents and the community what they did as children and how those experiences help them in the daily lives. The Anji Play folks have found that people are more willing to support efforts to restore play when they can remember their own play experiences.  When play is squeezed out of our children’s lives it can become a reinforcing feedback loop and they will have fewer play memories and be less inclined to support efforts to restore play when they have children of their own. The suppression of play and our increasing separation from all things natural will be one of those, “You don’t know what you lost ‘cuz its gone” kind of deals and we continue down this path at our peril.

There is no question that the future will be a very challenging place as the pace of change increases exponentially. That future will depend on the capabilities of creative, resilient and confident people. Since the challenges we will face are to a great extent unpredictable we cannot train children for the tasks that lie ahead. But we can support them to be prepared for the unexpected. And play is not only the best way to do so; it’s the only way. Our survival depends on preserving and protecting the power of play within the context of modern society.

We must foster a new human, a cyborg that knows how to play. Here are two examples of how we can do this. I am involved in my local schools and watch how the students use their devices. While many still use their smart devices to the exclusion of the outside world I see a significant number of students sharing their images and ideas in an inclusive way.  In today’s classrooms there is trend towards more and more student initiated and project based learning and that can be very playful.

I recently joined Mike Lanza, of Playborhood fame; on a beta test for a new game app that he has developed that uses smartphones as an integral part of a Geocache type of game that requires collaboration and a remote collaborator connected by smartphone.

As these examples illustrate, the trick to teaching a cyborg to play is not to be consumed by technology but to play with it.

For more on this subject visit “What Makes Us Human”.