The Impact of New Games: Then and Now 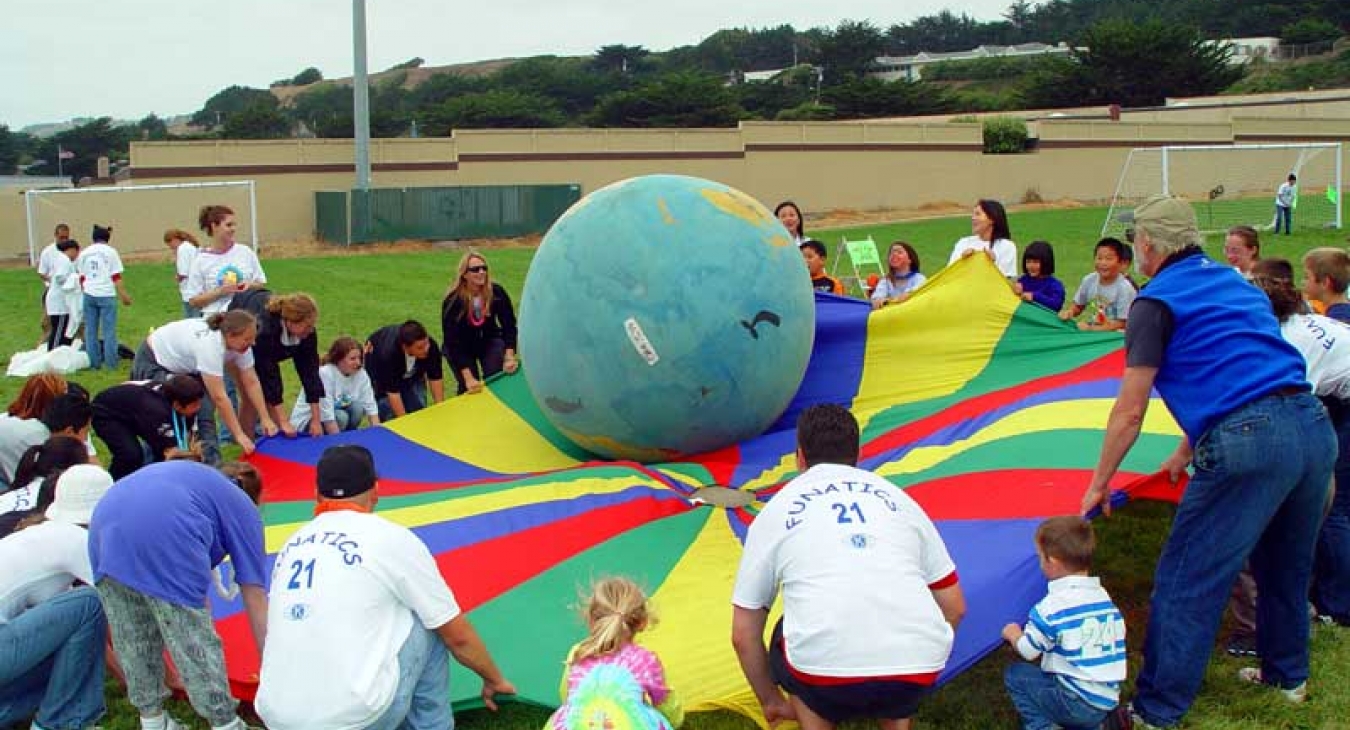 With the recent phenomenon of helicopter parenting, the extensive use of electronic media, and the emphasis on high-stakes testing, is it time to panic that free play has lost its relevance in today’s society? Fifty years ago the New Games Movement advocated for play for everyone and organized community play events in parks where young and old could play. While today people feel more isolated than ever, real community spirit was celebrated then.

The New Games Foundation is long gone, but rest assured that the spirit of healthy play, the expansion of cooperative play, and the proliferation of play advocacy is alive and well in 2015. In this limited space, it would be impossible to completely summarize the history and/or currency of the issues during the last fifty years, and there is some misleading, incomplete, and inaccurate information about the New Games movement. In this highly condensed perspective, the focus is on the NOW with the hope to inspire the future.

The Start of the New Games Movement

The New Games Movement was by no means the be-all/end-all of the positive play movement, but it did have significant influence that continues through today. It arose in the late 1960s and early 1970s from the anti-war, alternative play, and alternative consciousness movement in the San Francisco Bay Area—strongly influenced by Stewart Brand (The Whole Earth Catalog), George Leonard (The Ultimate Athlete), Pat Farrington, the Esalen Institute, Bernie DeKoven (The Well-Played Game), John O’Connell, and Burton Naiditch. Although the New Games Movement introduced, created, and popularized some “new” forms of play and games (i.e. Frisbee, parachute, trust games, earth ball, etc.), it was never about games or new vs. old. The movement’s philosophy of “soft war” (cushioned combative activities), “creative play” (expressive activities and fluid rules), and “trust” (group-building connectives) emphasized the power of play, facilitative leadership, empowerment, cooperation, healthy competition, player centeredness, creativity, community, flow, adaptation, process, joy, an eco-connection, and much more. With the right New Games’ spirit and leadership, a play facilitator could enliven an older traditional folk game or create an entirely new activity.

“If you remember the 1970s, you probably weren’t there.” ~Robin Williams

From 1973 to 1976, a series of large-scale New Games Tournaments (Festivals) in the Bay Area attracted thousands of people to each event and garnered much national attention. People came to engage in a wide range of fluid play activities to celebrate community and to live out the New Games tenet, “Play hard, play fair, nobody hurt.” At the end of each festival the players were to leave the play space cleaner than they found it (reinforcing their relationship with the earth). In 1974, the New Games Foundation was formed as a nonprofit entity, and the first New Games Conference was held to try to understand and expand on what was going on. Much of the early staff work was a volunteer “labor of love.”

From 1976 to 1981 and beyond, New Games tournaments expanded to all around the United States and spread to Canada, Australia, and Europe. During this time, several other significant events happened that helped spread the New Games philosophy and leadership approach. In 1976, the first New Games trainings were held, and the training program began to be fine-tuned. That year the first New Games book was published, and a multi-media program and supplemental training materials were developed. A national trainers and field representative program was developed by recruiting and nurturing a wide range of very talented people. This was greatly aided by a large, three-year Mott Foundation grant in 1977. Many trainings well into the 1980s culminated with local community festivals, helping to increase New Games’ visibility and credibility. By 1981, the National Training program had trained over 50,000 people, and More New Games was published. Both New Games books combined sold well over one million copies.
During the early 1980s, the New Games Movement was spread by the Foundation through fee-based group trainings (open to anyone), contracted trainings (with agencies), consulting “advanced” camps, innovative equipment and book catalogs, a “Friends of New Games” group, field representatives, and hundreds of festivals.

The Ending of the New Games Foundation (But Not New Games)

Good things must sometimes come to an end, but the power of what New Games set out to do persists; in fact, it has evolved with the times, and with many other organizations, it continues to influence positive play. There were many complex reasons why the New Games Foundation folded, and these will be debated by the principal actors, players, and organizers well into double overtime. In the interest of present organizations learning from them, here is a list of a few of the reasons:

In 1985, the Foundation closed and its assets went to the national Young Men’s Christian Association (YMCA), which didn’t do much with them.

Did the peace movement lead to no war? Did the green environmental movement lead to no pollution? Did the New Games movement lead to universal love and pure playfulness? No. Change is slower than needed, and the powers of big money, big media, materialism, and cut-throat competition are still strong, but change is constant and evolving, and there have been major positive impacts over the last 30 years.

There are many current American and international organizations that have carried on the work of healthy play alternatives, cooperative play, and play advocacy. A great percentage of these are referenced and elaborated upon in the new The Leader’s Handbook: Learning Leadership Skills by Facilitating Fun Games, Play and Positive Interaction (Michaelis and O’Connell, VenturePublish.com, 2013). The New Games Movement was only one of many influences and organizations that have taken us to 2015. So many other talented people and groups have had major impacts on current practices and dialog. And yet, directly or indirectly, wholly or partially, many of the following were or are influenced by the New Games’ spirit, activities, and leadership practices:

“Play is the exaltation of the possible.” ~Martin Buber

There are many more groups listed in The Leader’s Handbook. There are also many other places to look for positive play influences. These include:

“All that is necessary for evil to triumph is for enough good men (and women) to do nothing.” ~Edmund Burke (paraphrased)

In addition to the above organizations and trends, there are many other current indicators of the resurgence and healthiness of the play movement. The Internet is full of information about these topics. They include:

As we move through the 21st century, it is clear that healthy play and cooperation are needed more than ever. And the more we are a fast-paced, high-tech culture, the more we need playful “in the moment,” “high touch.” So there will always be a need for continuous play advocacy, and political, educational policy that backs that up. And along with this, there will continue to be a need for new organizations, movements, equipment, and materials. And even though we clearly need the high-tech, high-touch balance, let’s not shy away from integrating New Games principles into the present and future Digital Age. (See Celia Pearce, “Sustainable Play: Towards a New Games Movement for the Digital Age” Ludica 2012. http://homes.lmc.gatech.edu/~cpearce3/PearcePubs/DACSustainablePlay.pdf.) It’s up to each of us to keep that spirit of cooperation, peace, and creative play alive … so as Mahatma Gandhi said, “Be the change that you wish to see in the world.”