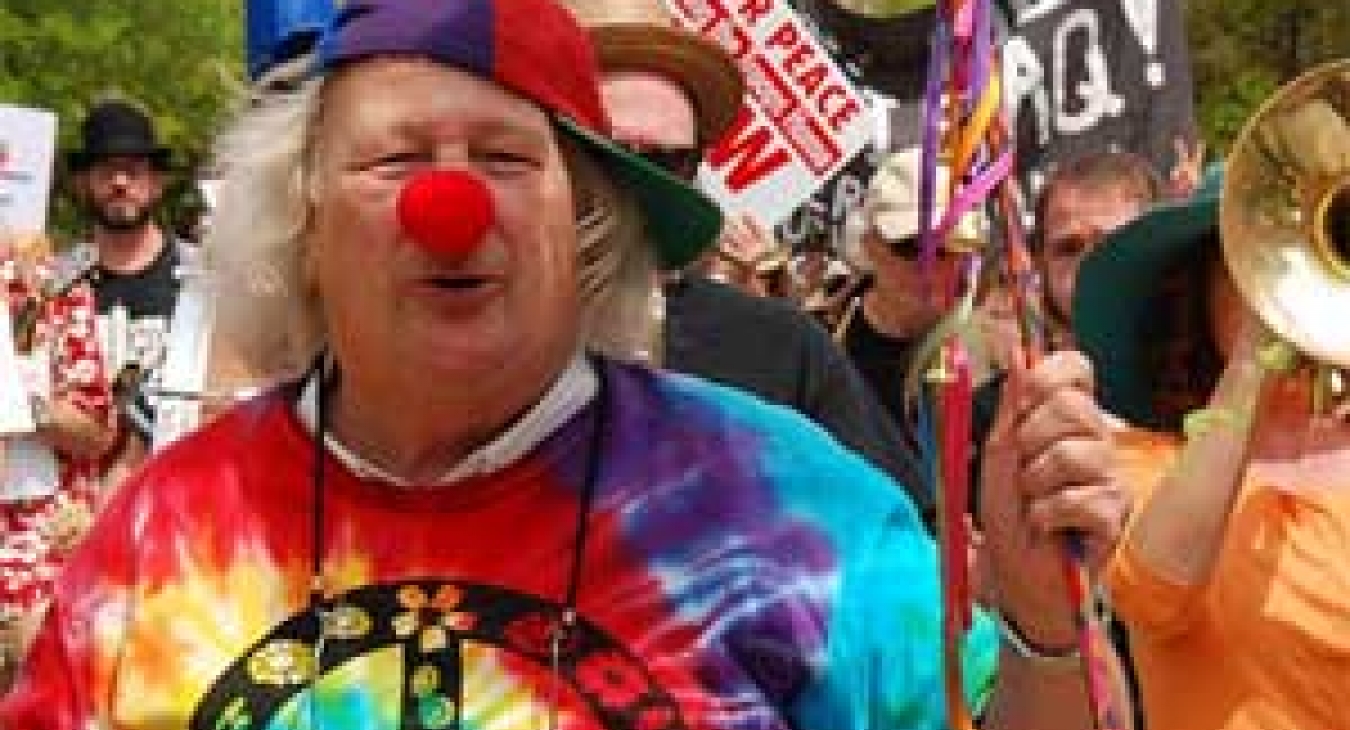 The more I learn about the importance of play and its many benefits, the more I wonder why it is relatively scarce in everyday life. Even as a staunch advocate for play, in my life it accounts for only a few minutes out of each day. It’s easy to see the same paucity of play in friends, schools, and workplaces. If you agree with my observation that the presence of play in our lives seems to be inversely related to its value, then this is something we need to explore further.

One of the key characteristics of play is its spontaneity. Play arises from our innermost core and is expressed without filters. Our emotions, generally joy, are right out front, visible for all the world to see. We are, in these intense moments, very vulnerable; it’s easy to “look the fool.”

Each of us has a threshold for this sort of exposure. Play advocates like Bernard DeKoven seem to be able to play indefinitely. But Bernie would be the first to tell you that the people who attend his events have widely divergent abilities to engage in and sustain playfulness. I believe that the vulnerability that play engenders is the reason that play is not more common in our lives and in society.

But while interpersonal play is relatively sparse, vicarious play is rampant. Our culture is rife with professional games, humorous sit-coms, and the crazy antics of cats on YouTube. By keeping play as a secondhand emotion we can get the pleasure without the exposure.

As Richard Louv has given us the useful concept of “Nature Deficit Disorder,” I am going to assert that we also have a “Play Avoidance Syndrome.” The Play Avoidance Syndrome is not only manifest in the displacement of interpersonal play with vicarious entertainment, it has also had a big impact on the provision of play spaces.

I have written previously that providing choice and safety are the key factors in promoting play. What happens when you factor in the Play Avoidance Syndrome is that the discussion about play settings gets stuck on safety. People are emotionally reluctant to take the next logical step and ask, “We are making our children safe … so they take on what challenges?”

Safety for safety sake is both meaningless and dangerous. In our imagination there is no end to ways that accidents and injury can occur and thus no end to the reduction, through rules and standards, of the play choices available to children. The hyper-sanitized playgrounds so ubiquitous today are comfortable to the public for the very reason that they don’t rub up against their Play Avoidance Syndrome. Conversely the sight of a real Adventure Playground gives folks the willies.

I shared this observation with my blogging colleague Angie Six, The Risky Kids, who had this to say:

I'm noticing that it's easy to point to safety as a reason we're avoiding play, when in reality it's often other issues. The safety issue is often a parent's trump card. Who can argue with a fellow parent, teacher, or your mom or dad when they tell you no because it's not "safe?" But I think if we really look inside ourselves when we discontinue or disallow play, it's more often for other reasons. It can be inconvenient (requiring attention or resources from a parent or caregiver they don't want to give) or it can be messy (requiring extra effort in cleanup).

Playing to the Point of Pain

In my observations of play behavior with children, adults, and animals, I have noticed that we generally play until it goes a bit too far … we tend to play up to the point of pain. Yesterday I watched kids playing on a Slip-n-Slide and sure enough the predicable end was a bit of crying. I’ve seen the same thing with adults whether at the card table or flag football.

We were all children once so we know, in a very intimate way, that play often does end in pain, so naturally we want to prevent this from happening to our loved ones. So this very old personal experience of the pain that comes along with play is one of the core reasons for Play Avoidance Syndrome.

But wait, maybe there is a developmental reason for this “arch” of play from joy to tears. Maybe this is one way we learn about our limits, consequences, and trust. Perhaps when we don’t allow play to run its natural course, we are delaying that learning. When we prevent the small boy from hard knocks, do we find that he doesn’t get the lesson until he gets his first car and learns it tragically?

Another way that the Play Avoidance Syndrome manifests itself is right here on the page. We are much more comfortable studying play, philosophizing about play, creating Pinterest collections of play, and in general making it intellectual rather than interpersonal and being playful.

This concept of the Play Avoidance Syndrome explains for me why most of the play movements I’ve watched over the past five decades have veered off into either safety regulations or head-trips.

The notion of a Play Avoidance Syndrome can be a powerful tool in advancing our efforts to increase play in our lives. As Brené Brown so eloquently points out, vulnerability is a skill. Through practice we can not only increase our vulnerability but also increase the length of time we tolerate being exposed. Being with children, and pets, is a great way to decrease our play avoidance. By paying attention to our feelings as we initiate play and throughout the play episode we can begin to note the subtle feelings of vulnerability. Asking the question, “Why have we stopped playing just now?” will help us feel a sort of “play fatigue” that is a natural part of play.

Recognizing the Play Avoidance Syndrome is also a useful tool for those of us who work to promote more play in society. First, it alerts us to the tendency to turn play into safety or intellectual debates. Second, it makes us aware that it generates feelings of vulnerability and this in turn gives us the chance to help people feel more comfortable. When we hear about the apartment complex that doesn’t allow children to be outside, the school district that has eliminated recess, or when we watch a helicoptering parent constantly preventing their child from playing freely, we need to see all of these anti-play behaviors as stemming from fear. Rather than just shake our heads and rant about the importance and benefits of play, we need to see these as expressions of fear and focus our attention on bringing these fears out into the open where they can be aired and overcome.

I asked Bernie DeKoven to review the ideas for this post and he shared two powerful and important insights. The first was about talking about play in a playful manner.

You can have fun, and still not be playful.

For more, here is Bernie’s blog posts, and here, regarding playfulness.

This notion of playfulness struck me as the very best way to help people stay engaged in a discussion about play. Shortly after my communications with Bernie, Gwen Gordon of Now Playing Media sent  a link to a video that is a perfect example of how effective communicating playfully about play can be. The example is Playface, a sort of info-mercial by Persil a British detergent. In this video you not only know more about play but also feel play alive within yourself. They have produced several more that are also very good illustrations of the effectiveness of a playful message.

The second insight Bernie shared was about losing one’s “reputation” as a way to become more playful. The idea here is that we often constrain our lives and actions because we are concerned about what others will think of us. So many parents want to do “what’s best” for their children, but what is best in an adult’s eye or by society is often contrary to what we know is really best for kids. I believe that this peer pressure to do “what’s best” often exerts so much leverage that even parents, who in their hearts understand that boredom, mud, and challenge are good things, feel that they have to enroll their kids in enrichment programs where they will be kept clean and “safe” so as to avoid being ostracized.

As we begin to better appreciate that there is often a reluctance to engage in play, to give play its own space and time, and this reticence is based in fear, we can now develop some tactics to create change.

Rather than lecture about the importance of play we first need to defuse the fears people harbor. For example, parents need to acknowledge their concern about giving their children a competitive advantage and that in turn motivates them to push their kids ahead of their developmental level. They need to be able to realize that what other’s think about their child rearing should be given second billing to supporting their children in their natural exploration, play, and development. To support parents who want to have more playful children, we need to build new peer groups that highly value the children’s intrinsic developmental pattern. We need peer groups who have learned to play together.

We have also begun to appreciate that to not trigger play avoidance we need to talk about play in a playful manner. We must have the courage to, as Gandi said, “Be the change we wish to see.” If I can incorporate this notion and make everything I do more playful, then I am sure that my play time will be much greater than the current few minutes per day.