The Coming Age Of Bespoke Play 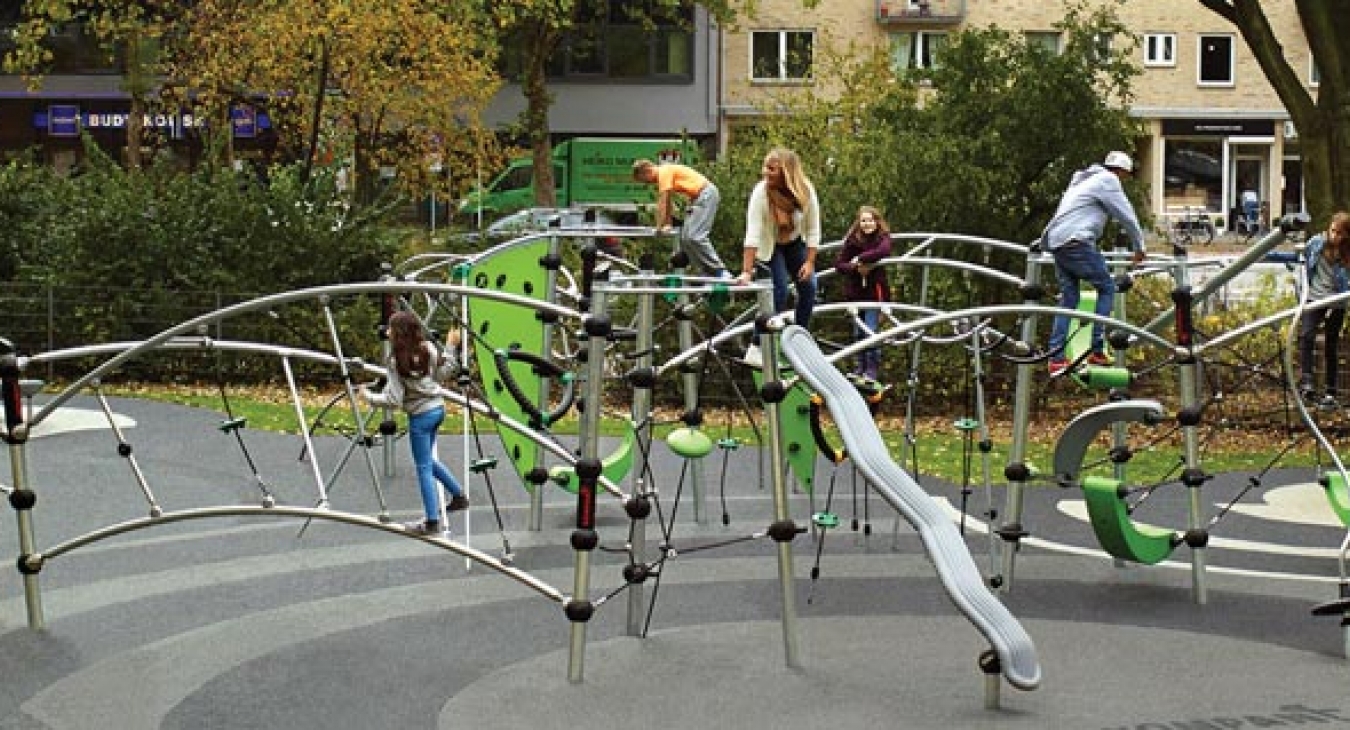 Most people think that art is something that sits on a pedestal or hangs on a wall and, up until recent history, that was largely true. Art before the 18th century was generally devoted to commemorating significant people, battles or ideals. Personal expression by artists was essentially unheard of. My, how times have changed.

Art and public spaces have always had a very close association. One could make the case that such a connection goes all the back to cave painting. As America began to grow as a nation, the Commons, or public squares in its towns, generally typically contained commemorative statues. This practice of park statuary was routine until park designers such as the pioneering Frederick Law Olmsted and John McLaren ushered in the “naturalist” ideals that rejected the traditional formal garden in favor of a pastoral approach.  These ideals embraced a humanistic philosophy which eschewed the practice of elevating individuals over the common man.

While parks were undergoing this change, so was the world of art. The transformation began with the Impressionistic art movement, which promoted the idea that the vision of the artist was as significant or even more important than the subject. This period was quickly followed by Dadaism, which blew away the notion that art was confined to pedestals or walls. For the Dadaist, art needed to engage the viewer, often in shocking ways.

Coinciding with these trends was the idea that children needed to play to be healthy.  This brought about the development of sandboxes and exercise apparatus and ultimately in specially designed play spaces. Even the naturalist park designers often included playgrounds while prohibiting commemorative sculptures. In effect, playgrounds became the surrogate for public art and thus the marriage of playgrounds and parks was formed.

Artists and the general public have very different views of what art actually is. When asked to define art, the typical person will list painting, sculpture, music, dance and drama. The artist will have a simpler view. In the view of the artist, art is what an artist does and painting or other work is merely the end product of the artistic process.

These days sculptors have a special challenge in that their work is hard to reproduce. Yes, castings can sometimes be made, but most modern sculpture does not take shapes that are moldable. Traditionally sculptors make complex objects one at a time and, until the advent of 3D printing, did not have access to digital reproduction of individual works. This means that artists who work in solid forms and who want to see their work in many places need tools of mass production like rotational molding, robotic welding, etc. When a sculptor chooses to go to mass production, it turns out that this can be a deal with the devil in that mass production of art, especially play sculptures, can easily lose the key ability to be in harmony with the their environment. In addition, they become so commoditized that they soon lose both artistic and play value. The economics of production and distribution are so powerful that this standardization and the resultant stagnation are inevitable. This factor perhaps explains some of the current discontent with mainstream play systems that, having become ubiquitous, no longer fulfill the expectation that objects in public spaces should rise above the commonplace and indeed should have artistic merit.

This may be about to change.

To understand play sculpture from the historical context and to get a sense of current trends navigate over to Paige John’s fabulous website, Play-scape.com, and go to the section on play sculpture. This makes the case that artists (and I include architects in this group) have a long tradition of creating play spaces. Visitors to this site will also see that in recent years there has been an uptick in commissions of playful and interactive sculptures in playground projects.

Paige often uses the term “bespoke” to highlight the special quality of artist-created playspaces. In America, rather than use the term bespoke, we tend to say “custom”, as in custom car for example.  The British use the word “bespoke” especially in creating very traditional and personal clothing and furniture; this tends to imbue the term with a sense of history. As such I think it is a most appropriate term to use for playspaces since play is older than mankind itself. To be a bespoke playspace also means much more than just handmade.  It also connotes that the creator brings an elevated level of craftsmanship and has the ability to relate the product to its environment.

Play has recently been the subject of several major exhibitions.  With the rise in popularity of children’s museums, zoos, and other similar venues, there are now enough sites that a play artist can anticipate a steady flow of commissions. An example of this trend is the environmental crocheted pieces of Toshiko Horiuchi MacAdam. Being able to work in a controlled setting, MacAdam and other play artists can freely express their visions and create monumental works that are impossible in free access public parks. Increasingly, major destination playspaces are fenced and some even have staffing which in turn creates the possibility for bespoke play designs in these more traditional playspaces.

Wood as a playground material is making a comeback and, as is often the case, the European community is leading the way. Perhaps the best example of this is the Danish firm Monstrum whose creative vision and heart for children’s play seems limitless. Another group working largely in wood is Kukuk in Germany, a firm that seems to have the goal of evoking nature to the greatest extent possible. Similar themes can be found in the work of EarthScape out of Canada.

The work of Scientific Art Studios in Richmond California, as installed at the San Francisco Zoo and elsewhere, is a great example of artistic playspaces using innovative materials. Ron Holthuysen and his team have invented technologies that not only allow for a wide range of creative expression but also have the durability expected for public installations.

As digital technology continues to evolve, it is being used more and more as an artist’s tool. Dan Christensen at UPI Parks uses a gigantic 3D computer controlled router to make molds that can produce limited edition sculptures that would be prohibitively expensive without digital casting technology that he and his team have developed. 3D printers already exist that can print a whole house and once these massive printers become tractor mounted for easy relocation, we will begin to see them used for on-site creation of playspaces as well.

The Challenge for the American Manufacturers

America is the powerhouse of products and we are a leader the world in manufacturing capacity. High volume may be great for cars and washing machines but it has led to a real problem for playgrounds. The manufacturers have created incredibly efficient factories to produce a standardized product. Now that the public has begun to tire of the “same old, same old,” producers need to introduce new products that match the current hot trends and create playgrounds that use natural materials or are otherwise unique. Unfortunately, those trends do not lend themselves well to the existing production resources and entirely new capabilities are needed to keep pace with a changing market. Making this investment will be challenging economically as well as requiring new marketing and distribution systems.

American producers that seek to reimagine playground systems can look to the example of the pioneering effort by Kompan with its introduction some years ago of the Galaxy range of products. The Galaxy system was a radical breakthrough that has both extremely high play value and strong sculptural merit. To create this innovation required a complete departure from their core products and a whole new production capacity.

Not every company has the resources to follow Kompan’s blank sheet approach. For many producers, the challenge is not just to design for the emerging bespoke market but to also reemploy as much of their existing production capacity as possible.

For a stellar example of how to tackle this challenge, consider the new PlayForm 7 from Playworld Systems. Clearly, PlayForm 7 stands on its own merit both as sculpture and as a play setting but it’s true genius and most impressive accomplishment is that the

product utilizes much of the existing manufacturing capabilities of Playworld Systems. This allows them to employ their infrastructure in new ways and preparing the company to generate a new market without massive investment. Such thinking and courageous corporate behavior is all too rare and deserves recognition and support.

The future belongs to bespoke

Clearly, there is a growing demand for new types of play and playspaces. It remains to be seen if established play equipment producers can adapt their operations to fulfill this market. It may also be that new companies will emerge that build their business model from the ground up to be the next generation of playspace providers. Most likely we will see both types but regardless of the method of creation, one thing is certain - the future belongs to bespoke playspaces.